Home Arseblog, the arsenal blog A trip in the Arseblog time machine 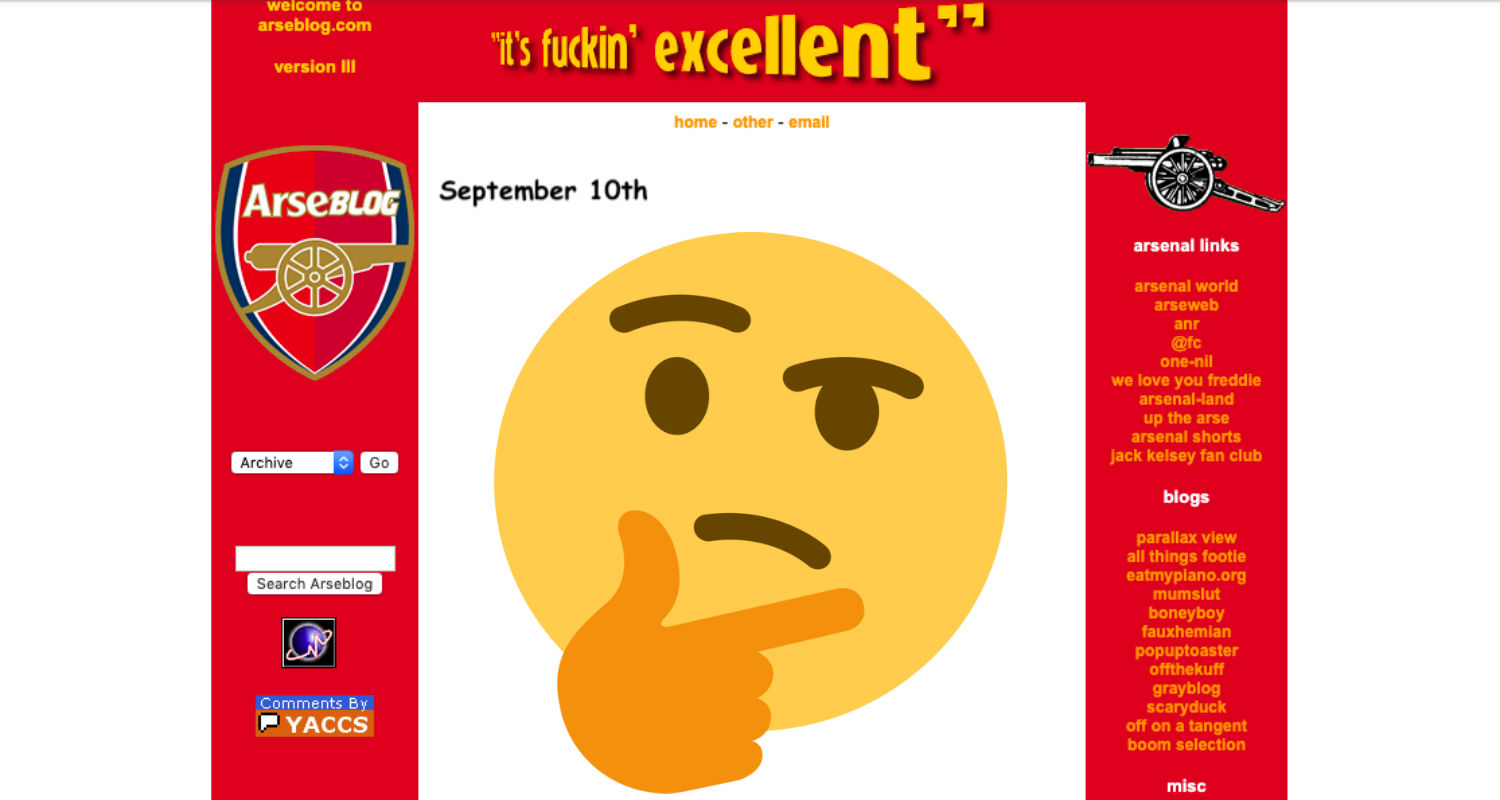 I spent all of yesterday worrying about what I was going to write about today and then I did the same lying in bed last night and now I’m doing it again while I stare at what is still a very blank page.

You know when you’re hungry but can’t be arsed to go to the shops and you keep opening the fridge in the hope that delicious, new ingredients might have miraculously appeared. I’ve basically been doing that with my mind for 24 hours.

Every time I think about writing this post, I’m hoping for a glorious homecooked lasagne of an idea and instead I keep getting the equivalent of two sorry-looking carrots and a half-eaten tub of mouldy houmous.

I really can’t be arsed to go down the Interlull route again. Bernd Leno didn’t play for Germany and neither Reiss Nelson nor Eddie Nketiah scored or assisted for England under-21s in their 2-0 win over Kosovo. They were relatively sprightly and each missed a decent chance, but they didn’t do anything worth shouting about. I do recall that Phil Foden had/has very white teeth.

Seeing as I’m really struggling, I’m going to check out what Blogs has written on this day in the past.

“Brand new – The Arseblog journalistic translation service. A handy tool for all sports journalists to help them correctly interpret the words of Arsenal players.”

This is literally all there is and the link to this much-vaunted service doesn’t work, so I’m not entirely sure what Blogs is on about on.

The transfer window was only introduced during the 2002/03 season and it looks as though the rumour-mill wasn’t affected, even in mid-September. John Halls ended up becoming a male supermodel. I’m not even kidding.

“The lads are going cottaging on Saturday as they take on Fulham. Patrick Vieira, fresh from his red card against the North Atlantic Egyptians, and Pascal Cygan, fresh from his … erm…well…er…, are both back from injury and should go into the team as Cesc and Justin Hoyte make way. Sol Campbell is still a couple of weeks away from full fitness.”

Second half strikes from Freddie Ljungberg and Jose Antonio Reyes and a Zat Knight own goal ensured three more points as the Invincibles cruised to a 3-0 win at Fulham.

“TH is out of today’s game against Boro having picked up a calf injury while Freddie Ljungberg is rested after playing two games for Sweden. That means player of the month Alexander Hleb will start, will he play on the right hand side or up front? We shall see. Not much else happening really.”

We went on to lose 2-1 to Boro. Yakubu, who is still only 23, and Massimo Macaroni got the goals. Reyes nabbed a consolation. I always hated playing Middlesbrough away. Except when we hammered them.

Reflecting on a 1-1 draw with Boro in just our second game at the Emirates, Blogs laments:

“We dominated the game and although that frustrating tendency to want to walk the ball into the net was apparent again we had plenty of shots on goal. Schwarzer made one fantastic save from Alexander Hleb, he made saves from Cesc and Robin van Persie too and Gilberto and van Persie both had chances which went wide.”

I have absolutely no recollection of this game despite being there. I feel like you could swap Schwarzer out for any number of keepers during this period.

Blogs goes on like this for a bit. It’s good to be reminded that it’s not just me who struggles during the Interlull.

“Amaury Bischoff is a signing that baffled, perplexed and bemused most Arsenal fans. He has barely kicked a professional ball in anger but says he’s eager to repay the faith shown in him by Arsene Wenger.”

I still think this kid was a nephew of Wenger’s on work experience. Perhaps we’ll find out when Arsene writes his book. He’s surely made a start on it by now. It’s not like he’s doing anything else.

“Goodbye! Cheerio! See ya later, Interlull. Yeah, that’s right. Pack your bags and shove off. Thankfully it’s over. It seems like the longest Interlull of all time and there have been many lengthy and tedious ones in the past. At this moment in time there don’t appear to be any casualties but we’ll have to wait for official confirmation of that.”

I know this feeling.

“Also in contention are the reserves playing trio of Squillaci, Djourou and Denilson. They’re all fit and ready and it’s just ‘down to selection’ according to the boss. I think he’ll stick with Vermaelen and Koscielny but again the competition for places is a good thing.”

Squillaci actually made his debut against Bolton and we won 4-1 at the Emirates. I remember this being the game that Paul Robinson absolutely nailed Diaby’s already dodgy ankle and Stuart Attwell didn’t even blow for a foul.

“We’re in a real slump at the moment and although the squad is in better shape it would be unrealistic to expect vintage, flowing Arsenal. We’re going to have to scrap our way of it, I think. Swansea might face a backlash from the Old Trafford defeat, and I have no doubt those involved want to put that right, but this is a team short on confidence and that doesn’t return easily.”

The first game back after the 8-2 defeat at Old Trafford and our trolley-dash shopping spree on transfer deadline. We won 1-0 against Swansea with newbies, Mertesacker and Arteta making debuts and Benayoun on the bench. I still can’t believe we made the Champions League that season.

“This is not a normal Monday, not a real Monday, it’s a Monday slap bang in the middle of the Interlull which means our capacity to enjoy this day is diminished. Productivity in work will be down, not because folk are being distracted by Arsenal, but because they’re distracted by no Arsenal. Such is the dearth of news and information that more time will be spent scurrying tither and yon than if they could just go to their favourite football site and read all about it.”

Same as it ever was.

“Sometimes I wonder if I wasn’t drafted in during a previous existence to take over the creation of the world while god had to go get a cuppa and have a poo, and although the instructions were very clear my lack of ability in this area is why we have Stoke fans, Phil Collins and owls, the sinister, head-turning fuckers.”

The Interlull takes the written word to strange places.

“After Arteta and Ozil at Leicester last weekend, that’s the third twisted ankle of the season so far. Is there some way we can get these guys boots with scaffolding on the side to support them?”

Lamenting Interlull injuries, I kinda did that yesterday when I chatted about Xhaka and Torreira. On the above occasion, Aaron Ramsey was fine and he started the 2-2 draw with City at the Emirates.

“If Joel Campbell had all his teeth removed and scrunched up his face, would it be a perfect circle? What time is love? Was the signing of Park Chu-Young a KLF-like statement –it being the football transfer equivalent of burning actual money on a Scottish island? You ever been in a cockpit before? Ever seen a grown man naked?”

Blogs weighs up what the press should ask Wenger in his first press-conference after the Interlull. This is just some of them, you really should a take a couple minutes to read the full list.

In a preview of our game with Southampton, which we won 2-1 courtesy of a 94th minute penalty by Santi Cazorla, Blogs pondered:

“My suspicion is that Tuesday’s Champions League game away at PSG will have a bit of an impact on today’s team selection. Alexis Sanchez, for example, arrived back later than the rest after his international duties, so it might be a case that no chances are taken with his fitness and he could start from the bench. Up front we could recall Olivier Giroud or hand a full debut straight away to new boy Lucas Perez.”

I can’t wait for us to be back in the Champions League so we’re forced to rotate our team and subsequently struggle to beat mid-range teams at home.

“I do like him, but he does make hard work of the finishes sometimes. By the end of the season I fully expect him to have scored a goal with his right arse-cheek while doing a forward tumble.”

Blogs could only be writing about Danny Welbeck, who we’ll probably face on Sunday. Here’s hoping the prophecy doesn’t actually come true.

There’s little point posting the article from this time last year as I wrote it. Let’s just say I was very complimentary about Matteo Guendouzi and he could tonight make his debut for France. You’re very welcome, young man.

Right, I’m going to sign off. Thanks for putting up with me for the last week or so. I’m not going to lie, without interesting Arsenal stuff to talk about it’s been a bit of a struggle this time around. Things should start to pick up from tomorrow. Not only will Blogs be back but so will most of our players.

Did I mention I’m interviewing Per Mertesacker this afternoon? Now that I think about it, I should have written about that.