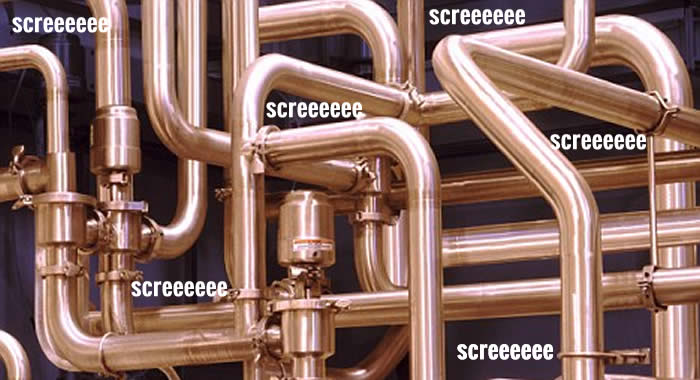 It’s official. I have Interlull tedium crossed with extreme tiredness.

At about 1am last night, from out of nowhere, my pipes started screeching. For those of you concerned about my well-being, given that I am a man who is coming up shortly on his 42nd birthday (and how the fuck did that happen?!), fear not.

It was the pipes of the house. Right beside the boiler under the stairs.

“Screeeeeeeeeeeeeeech,” it went. Waking up me, Mrs Blogs, the Blogette and the poor old Arseblog German Shepherd who thought someone was whistling to him from inside the walls. My first thought was ‘This is the last time I try and hang a mirror’, for with my special brand of ineptitude somehow trying to mount a reflective piece of glass on the hearth had banjaxed the waterworks of the house.

I know that the two things are/were unrelated but you underestimate my ability to DIY. Sometimes I wonder if I wasn’t drafted in during a previous existence to take over the creation of the world while god had to go get a cuppa and have a poo, and although the instructions were very clear my lack of ability in this area is why we have Stoke fans, Phil Collins and owls, the sinister, head-turning fuckers.

“Sorry, I did what it said on the diagram, lordy, and I do seem to have created a kind of tree.”

“Firstly, who the hell is going to ever want tiny trees? And secondly, by making them you have also completely bollixed the earth’s crust which I worked so hard to smooth out. Like a master plasterer I was, and you’ve inserted fault lines. Well done, you’ve invented earthquakes. The people of San Francisco aren’t going to love you, let me tell you.”

I had no idea how to fix it. The pipes were screeching and making an odd clicking noise. There was some kind of element leading to the boiler, the pipes below it were cold, above it boiling hot. And there was no heating on or anything.

I had literally no idea what to do. So, like the old days when your television reception got fuzzy, I resorted to the solution as old as time itself: I bashed the shite out of the pipes with a hammer. For safety reasons I turned my head away as I did this in case it exploded or something.

“Screeeeeeeeeeeeeeech”, it continued. ‘Perhaps there is something in the attic’, I thought, ‘that is causing the flow of the water from the tank to the pipes to become obstructed’. So I got a ladder and a torch, clambered into the space above the house which looked like this, by the way, and had a look there. I saw water in a tank, and a kind of ball thing which I believe is used in the mouths of Tory MPs as they relax after work, and that was it.

I descended, waving away the tarantulas and wolf spiders that were trying to consume me (it was dark, I’m assuming that’s what was up there. That or the gigantic spider from IT but sadly I had forgotten my asthma inhaler to shoot up its bumhole).  I was perplexed. And the noise was getting screechier and screechier.

It was back to the pipes and the boiler and the element thingy and after trying to turn off the various taps and pipes that exist in that place, I noticed a little dial/switch thing on the far side of the element. Moving it just slightly stopped the noise. ‘Hurrah’, I said. ‘Phew’, said Blogette who had come down to assist me knowing that she was just as likely to stumble across the answer as I was. ‘Ruff’, said Archer who was glad that we were no longer in a zone of danger.

I went back to bed and then spent two hours lying awake wondering what the hell what had actually happened and before long I had convinced myself that whatever it was was likely to detonate at any moment blowing us all to kingdom come. It’s hard to sleep when facing imminent death, you know. In the end, I nodded off but I’m bloody knackered now.

So, the lesson here is that pipes, regardless of how extremely handy they are – and they really are – are assholes. And that coffee is wonderful stuff.

Tomorrow: How I deal with a localised hurricane in my kitchen as killer centipedes emerge from a goddam sinkhole in my bathroom.

For those looking for Arsenal stuff, there’s none of that happening really. If you fancy winning a signed pair of Olivier Giroud’s boots have a look here for a competition.

And here’s Anam with the latest Tactics Column which looks at new signing Mesut Ozil.

The last of the internationals take place tonight. Here’s to no injuries. And no wonky plumbing.