In a move that has stunned the world of football, Chelsea have announced the signing of Arsenal’s janitor, Des O’Slugs. O’Slugs has been at the club since 1994 and has revolutionised waste management and garbology to such a degree that he wil be forced to take ‘garden leave’ before moving to Stamford Bridge.

Arsenal players were said to be shocked as the announcement was made after training today. One player who wished to remain anonymous said “Kolo is very unhappy aboot this. Kolo loved Janitor Des even though he spent most of his time in his ‘office’ under the stairs. Kolo used to say ‘Come out of the closet Janitor Des’, but he never did.”

Bookies initially made Pascal Cygan the new favourite to take over the position, but quickly lengthened his odds as they realised he’s incapable of mopping up after himself, let along anyone else. 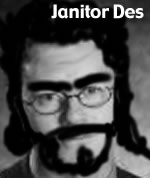 Some good news yesterday though was the release of Arsenal’s accounts which show that we’re not as poor as everyone said we were, and that we actually made a profit in the last financial year. There are all sorts of facts and figures floating around. Some key points:

With regards to the new stadium, Edelman believes funding could be in place within 5 weeks and work could start as early as November. “Although we are making progress, we have not yet got banks’ and financial institutions’ final signatures.”

This also means that Arsene Wenger will have money to spend in the January transfer window, should he wish to spend it. Edelman again says “Arsene has got transfer budgets which are greater than was available in the summer, although he spent as much as he wanted to spend then. He attends board meetings and knows what he has to invest in the team.”

Peter Hill-Wood. All in all it’s good news for the club. So good they gave away a free interview with Keith Edelman on arsenal.com.

There were certain sections of the media who took great pleasure in overplaying our financial problems. The same ones that are kissing Chelsea’s rich arses now. It’s nice to know we’ve got a board who won’t bankrupt us the way so many have in English football over the last few years. All we need now is the cash for the bricks and mortar and team of refugee builders to get Ashburton Grove up and running, and the future’s so bright I’ve got to wear some kind of tinted optical device.

John Halls to QPR? Former Arsenal striker Davor Suker says Arsenal are interested in Croation U-21 star Niko Kranjcar. Can’t see how he’d get a work permit though. Ashley Cole and Sol Campbell are set to be rested for England’s game against Lichtenstein tonight.

That’s it. Now I’m off to work really hard at my job for it is interesting and stimulating and challenging. Pfffffffff.