Tactics Column: How a young Arsenal evolved in 2021/22

Looking back over an entire season is always difficult. A top four challenge from Arsenal was considered unlikely back in August but missing out on fourth felt like a huge disappointment come mid-May. Such is the nature of football. But, in order to help look over the 2021/22 campaign, I revisited my look at 2020/21 a year ago.

In May 2021 we were left wondering how sustainable that improvement in the second half of the season, largely against weak opposition, actually was. Now, 38 Premier League games later, it feels like we have an answer and it’s a pretty good one.

The attack is far from fixed but it’s better and it feels, more than anything, like we can finally talk about the team having a very obvious way of playing.

There were peaks and troughs again, like there are in any season, and the season can again be broken down into periods, but the change wasn’t nearly as drastic as the previous campaign. We can look back and as good as throw the first three games of the season out the window. Just look at the line-ups and you see this wasn’t anything like the Arsenal we saw for the rest of the season. Aaron Ramsdale, Gabriel and Takehiro Tomiyasu did not start any of those matches. Calum Chambers, Pablo Mari, Sambi Lokonga and Nicolas Pepe each started two. Sead Kolasinac even played up from the off at Manchester City and Folarin Balogun led the line at Brentford.

By the end of the next game, a home win against Norwich, something like an obvious starting lineup was in place. By now we can look back and say that’s the actual Arsenal; by November and until the end of the season only two positions were up for debate if Mikel Arteta had everyone available. 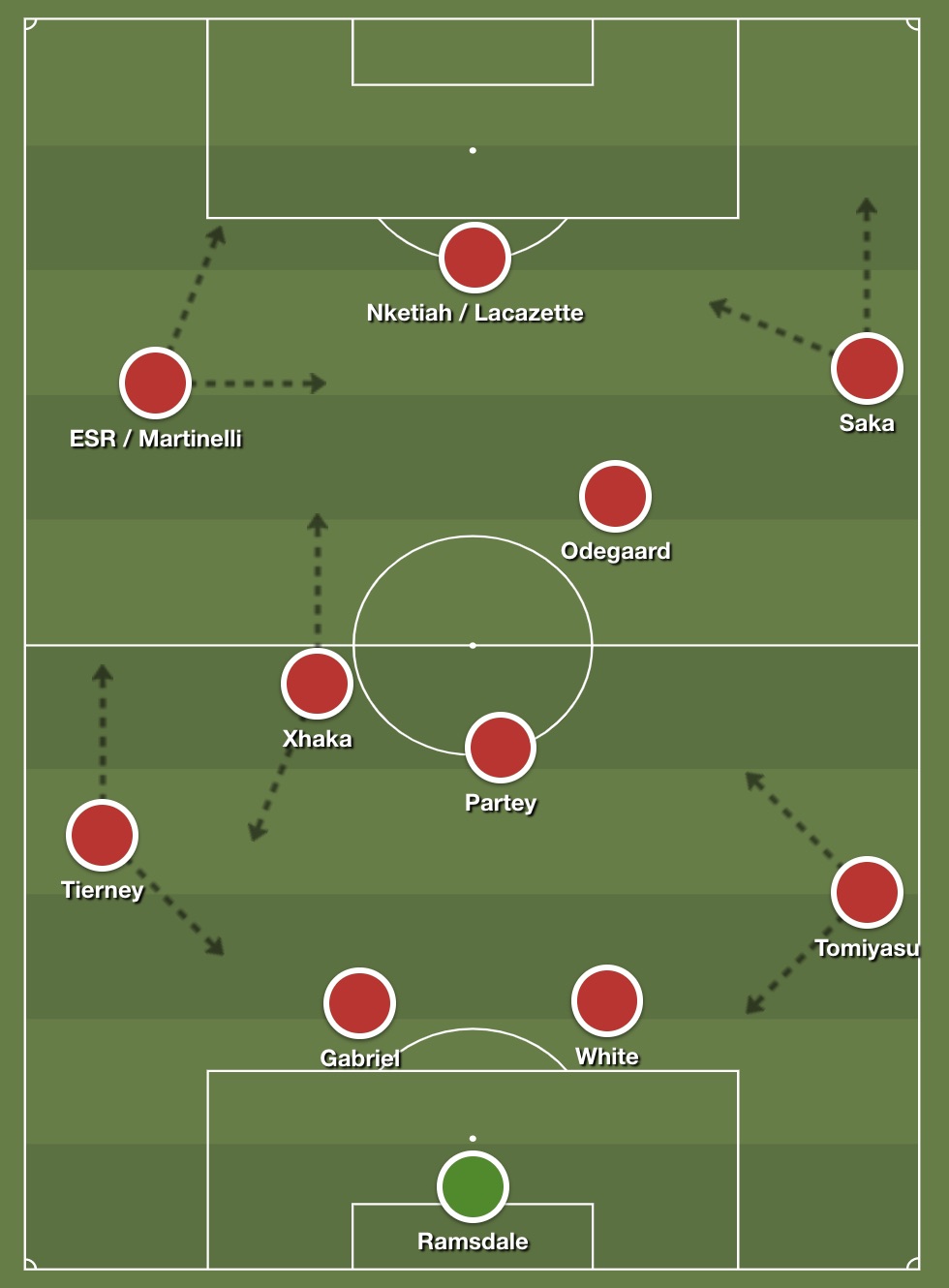 And so, after those first three games, a better Arsenal emerged. An Arsenal that kept the ball better and an Arsenal that pressed with much more cohesion than the side full of players who didn’t seem to know their jobs as they were ripped apart by Chelsea in August.

The addition of Martin Odegaard was crucial in that. The Norwegian oozes class on the ball but he sets the tone and constantly instructs team-mates as he guides Arsenal’s press. The Gunners consistently look like they’re playing a 4-4-2 defensively, with Odegaard joining the striker as the first line of defence. Most of the time, Arsenal try to force the opposition to their own left flank, pressing aggressively on that side. He will bend his run to block a potential pass into midfield before sprinting at the centre-back. 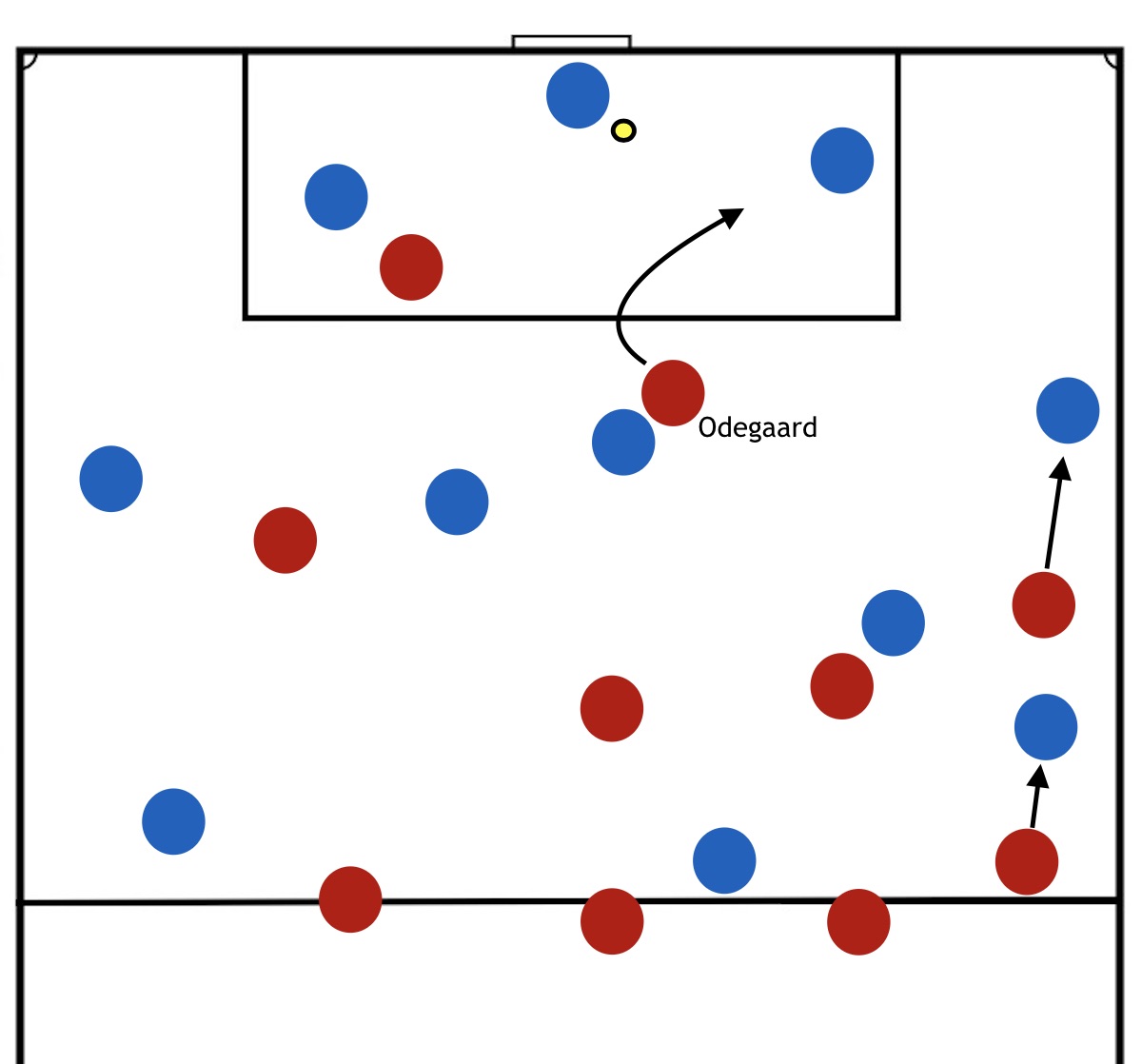 Saka will push up, so will Tomiyasu behind him, and the deeper midfielder on that side of the pitch will squeeze across too. If needed, one centre-back will also aggressively mark the striker, with the other centre-back and left-back Kieran Tierney covering the width and depth of the pitch.

Arsenal will press the same to the other side of the pitch too but they prefer to do this on the right, with Odegaard’s timing and acceleration decisive.

The Norwegian isn’t just a visual trigger, either. He orchestrates his team-mates. Sometimes they’re too high and should drop back to make an escape route harder to find.

And sometimes they’re too low and need to be told to get higher upfield to force the opposition back. 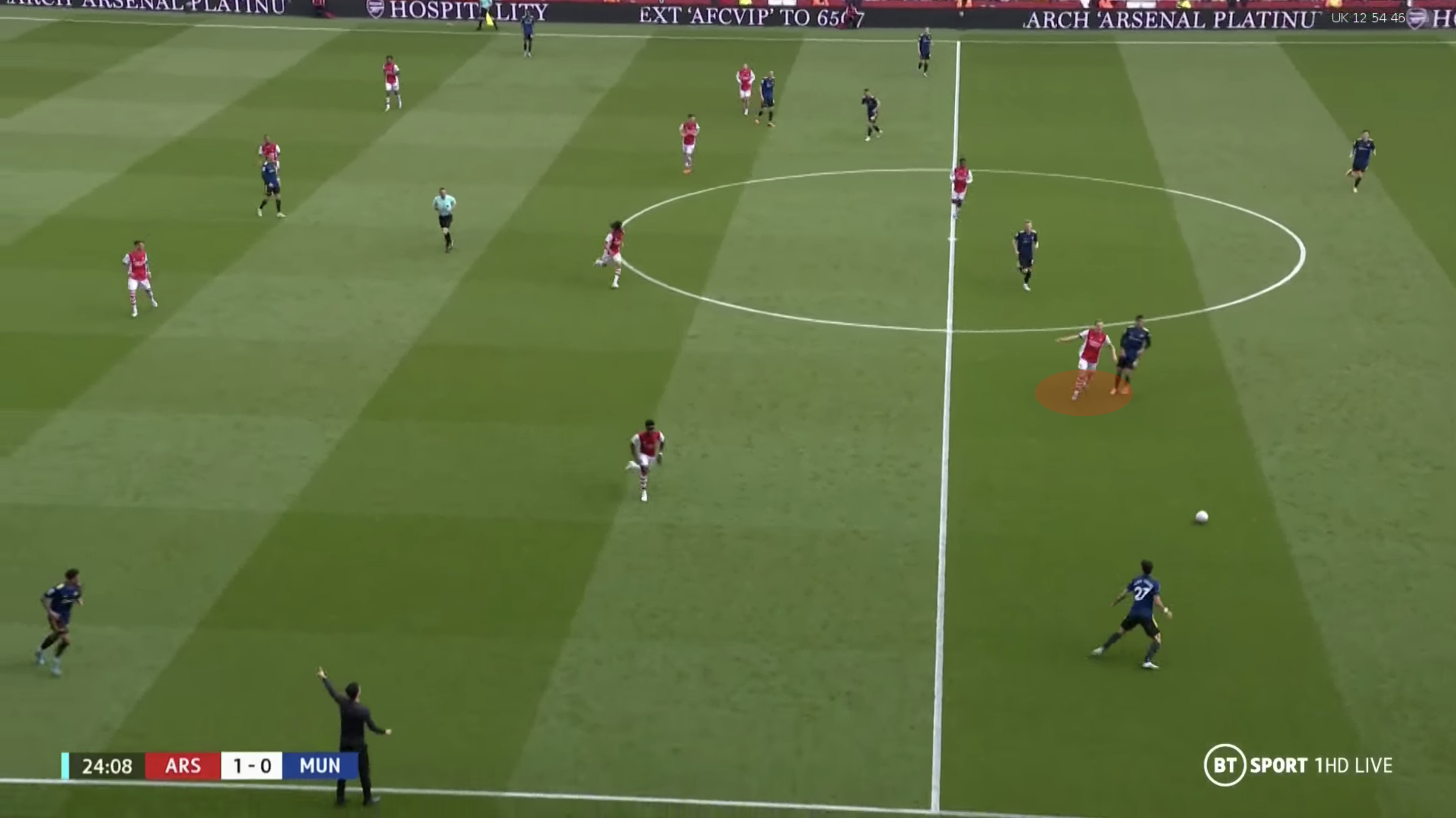 At times in recent seasons it felt like Arsenal were passive against the ball but Odegaard has been one of the keys to changing that.

It has also felt like the team has been too predictable going forward but he is heavily involved in that changing as well. The playmaker was too static in the opening months of the season but found his rhythm in the winter. It’s not coincidence the team improved at the same time and it may be the change of shape in possession that helped him.

This felt like a glimpse at what Mikel Arteta actually wants. A lone holding midfielder and a much more flexible and unpredictable attack. Arsenal went from this fairly obvious attacking approach, always in a 2-3-5 or 3-2-5 shape, always with the front five in the same constellation: 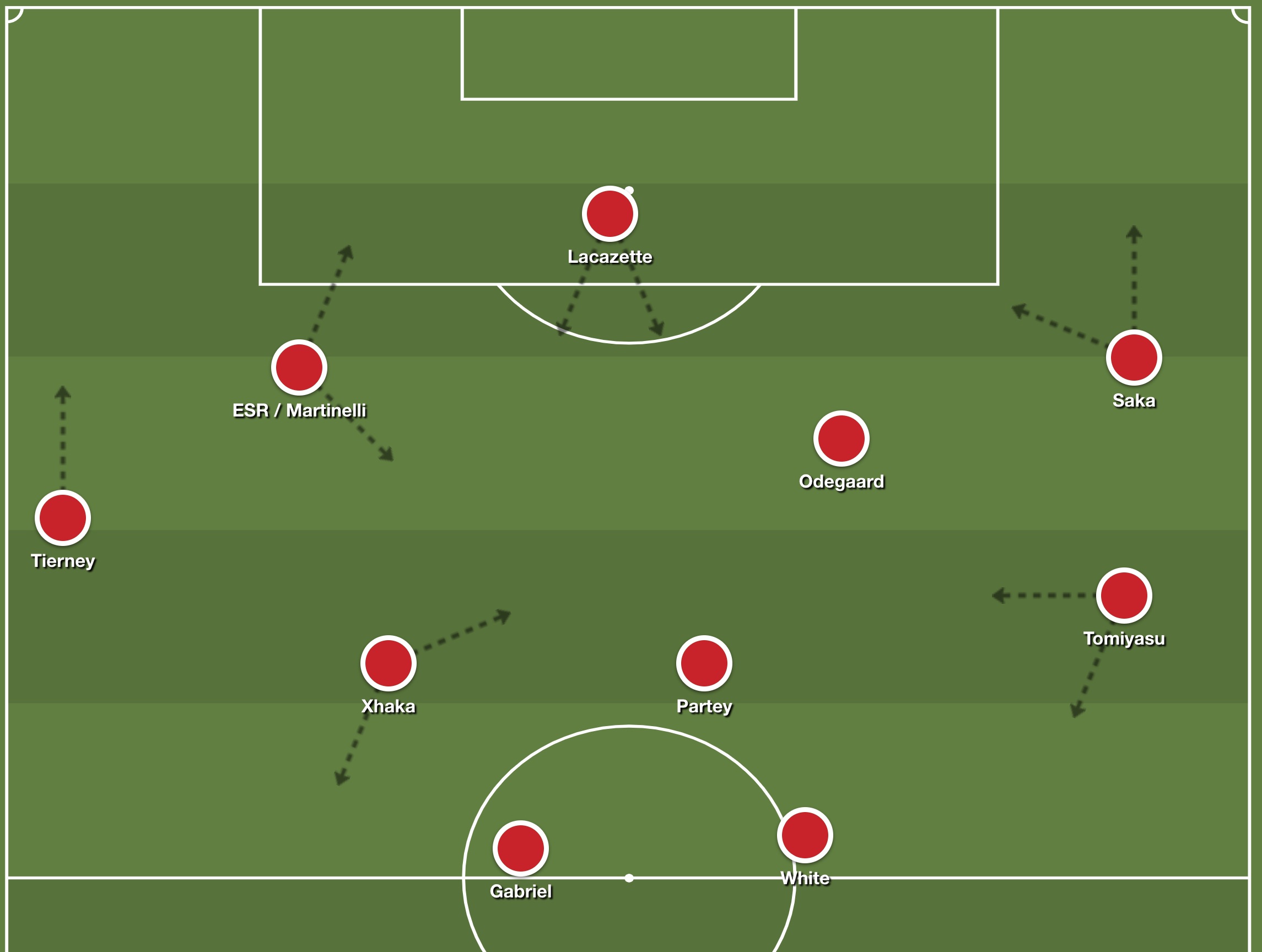 To one that suddenly saw Tierney in the backline and Xhaka in the box, or Saka cutting inside as Odegaard overlapped him and gave him more space inside.

The overall setup didn’t change — a five-man frontline was clear as day — but the patterns varied so much more as Tierney could overlap, covered by Xhaka, or tuck into defence and allow Xhaka to get forward centrally as Cedric joined in from the opposite flank. 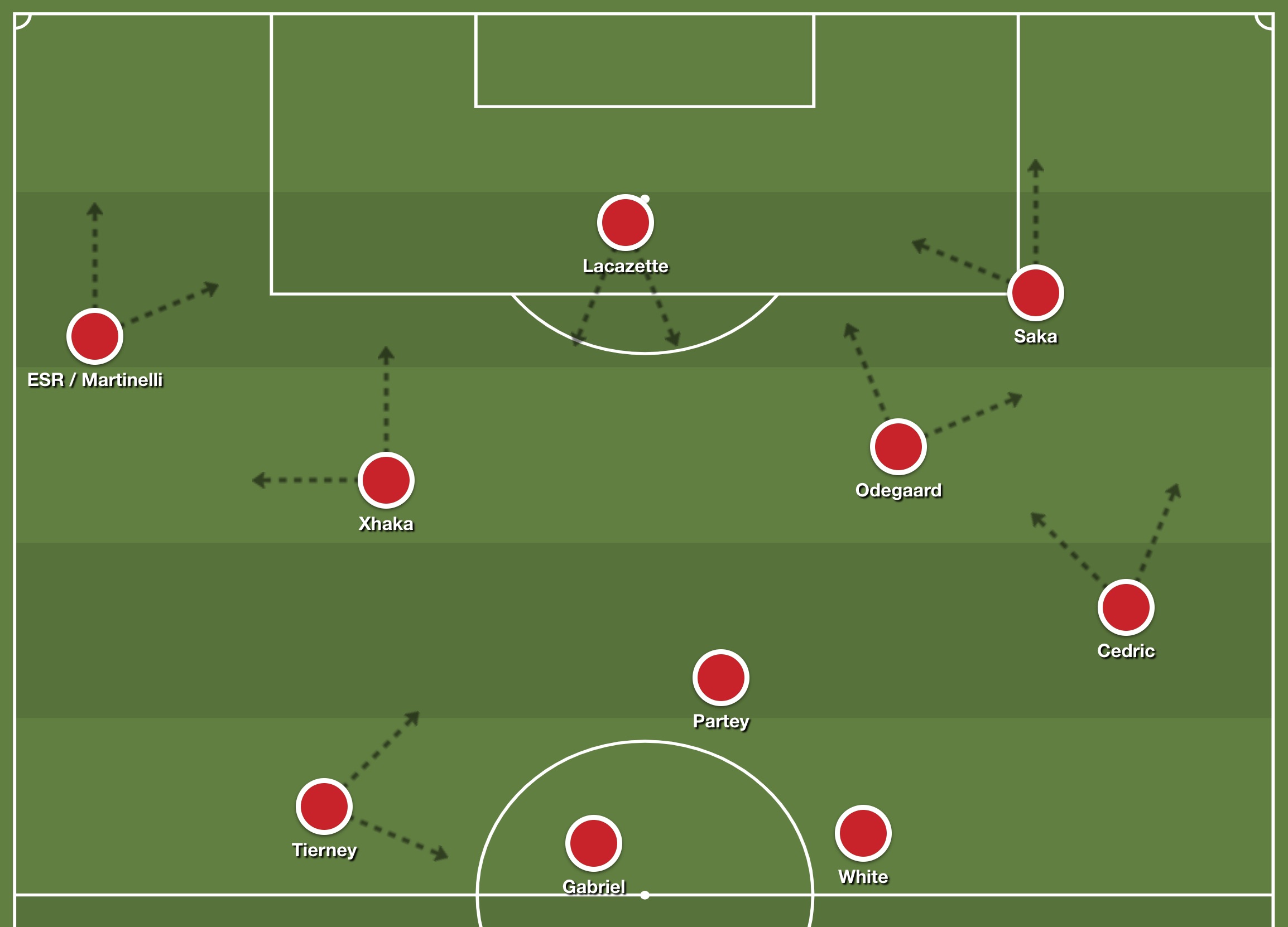 The difference for Saka in particular was obvious. He scored seven of his 11 Premier League goals (and managed three of his seven assists) for the season in his 13 appearances after the defeat at Everton and before the defeat at Crystal Palace. Arsenal produced 1.9 expected goals per 90 in those games, having managed 1.36 xG/90 before and 1.71 xG/90 after. The attack clicked from December onwards in a way Arsenal had not managed before in the Arteta era.

Unfortunately, injuries put paid to the improvement by making the team less stable. Within the space of a couple of hours Arsenal no longer had Tierney — the only fullback at the club that can play something like a centre-half and something like a winger, adding that flexibility — or Partey — the only midfielder at the club good enough both defensively and in possession that he can play alone at the base of midfield. The attack kept chugging along for the most part but the team’s ability to control games and stay stable at the back was lost.

Without Tierney there to allow Xhaka to roam, an isolated Partey was pressed out of the game at Crystal Palace and his injury proved costly. As did everyone else in the league cottoning on to the fact that Alexandre Lacazette would not threaten them in behind and centre-backs could let the midfield deal with him so they didn’t leave gaps at the back. Palace did well to shut the Frenchman down before he could turn and help Arsenal build attacks from their own half. Brighton did the same, allowing them to play with three centre-backs covering the entire width of the pitch and two wide midfielders on the flanks, as the excellent and entertaining Catsenal on YouTube explained (Subtitles needed!)

Arsenal recovered from the setbacks in those games and played well to beat Manchester United and excellently to beat Chelsea with Eddie Nketiah impressing in those matches and again against West Ham, seemingly earning himself a new contract, but an old problem reared its head down the home straight: Arteta’s side cannot come from behind to win.

This is a big area for improvement and we saw green shoots against Wolves and Brighton, where Arsenal did sustain pressure, once with reward and once without, in a way they haven’t done consistently enough in recent seasons. Making sure the team improves in that regard will be Arteta’s biggest test but he will be helped massively by the addition of a striker; by now it’s obvious to everyone that Arsenal need an upgrade up front.

Perhaps Nketiah’s end of season run of form would be looked upon more favourably had Tierney and Partey stayed fit. In that scenario, it feels likely that the striker’s goals and work leading the line would have been enough to see Arsenal squeak fourth. But that is another issue: the backups in those positions see such a drop off that it compromises the entire team.

Still, Arsenal have come a long way over the past 18 months. The 20 youngest starting XIs named in the Premier League in 2021/22 were all named by Mikel Arteta. There was a shift in formation to make the team less predictable and, after a summer of targeting younger players, it seems a couple of more established players will be looked at this summer to immediately strengthen the options up front (Gabriel Jesus) and add more attacking threat from midfield (Youri Tielemans) as Arteta looks to build on what look like very solid foundations.