One thing was clear as Arsenal were overrun by Chelsea on Sunday: the left flank was a problem. Both Chelsea goals came from Reece James having the freedom of Islington afforded to him. And Arsenal were fortunate to only pay for it twice.

The question is, what happened and why did the team fail to find a solution? Though there’s a temptation to look at individual players — social media was full of opinions on Sunday, with people seemingly believing either Bukayo Saka didn’t track back like he should have, Kieran Tierney was too narrow, or Granit Xhaka should’ve done more to help — the issues all stemmed from a bad system.

That’s not to say any of those individuals, or any of the others, played well. But the poorly organised pressing of the entire team left players exposed. Arsenal failed to win the ball high upfield or stop Chelsea from playing out from the back. On the surface, you’d probably guess Mikel Arteta didn’t instruct his team to press. But they did. They just did it awfully.

Watching the first half back, you wonder why Arsenal didn’t stop trying to push upfield earlier. The team did not look remotely ready to press Chelsea effectively and were pulled around through the first half, yet Arteta didn’t call the press off. Arsenal continued and were picked off with ease, failing to pose a single question Chelsea didn’t have an immediate answer to. The team have tried to press with more intensity in pre-season and the same has continued into the new campaign, including last week at Brentford. But you can’t press high effectively through sheer intention and a poor press can be broken and will then leave the team exposed.

That’s exactly what happened on Sunday. Bukayo Saka seemed to be instructed to block passes into Jorginho where possible and press Cesar Azpilicueta whenever possible. But the Englishman couldn’t manage the former and was generally far too far from Azpilicueta to do the latter effectively. Still, his orientation was always towards the Spaniard when he felt he might receive possession. Chelsea worked around it by only playing the ball into their captain when he had time. 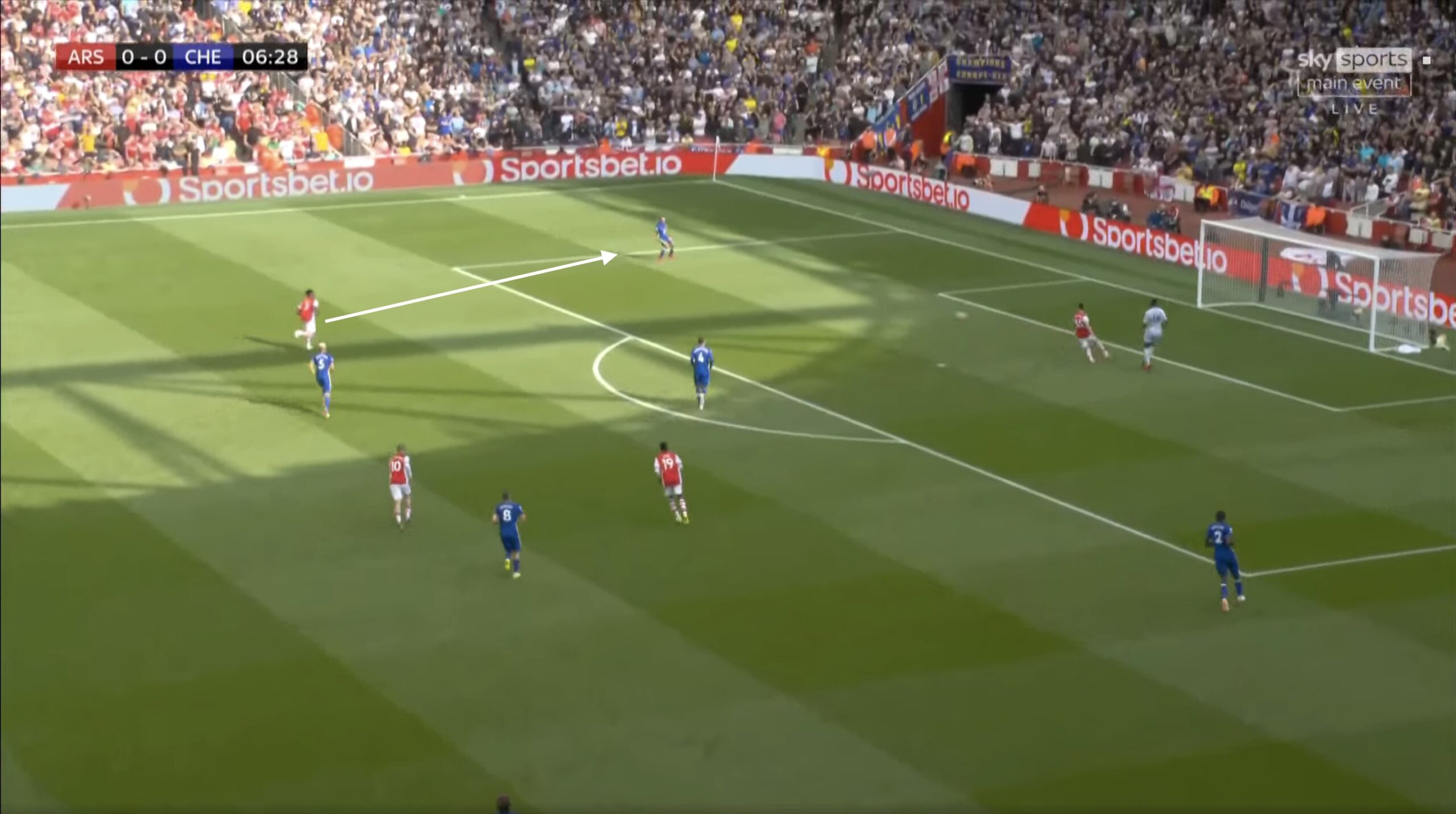 The obvious knock-on effect was that Saka was too far forward to help Tierney at left-back when Chelsea broke the press. The Scot was outnumbered over and over again, with Mason Mount catching his attention inside and Reece James pushing upfield on the overlap. With Lokonga trying to aid the intention to press,  Granit Xhaka couldn’t focus too heavily on Mason Mount, which would have left a gaping hole in the centre of the pitch and given Pablo Mari an even more horrible afternoon than he already had dealing with Romelu Lukaku, with the Belgian dominating every contest, especially when the ball came into feet.

The gap between Xhaka and Lokonga was an issue and one that couldn’t really afford to be exacerbated by the Swiss man-marking Mount. 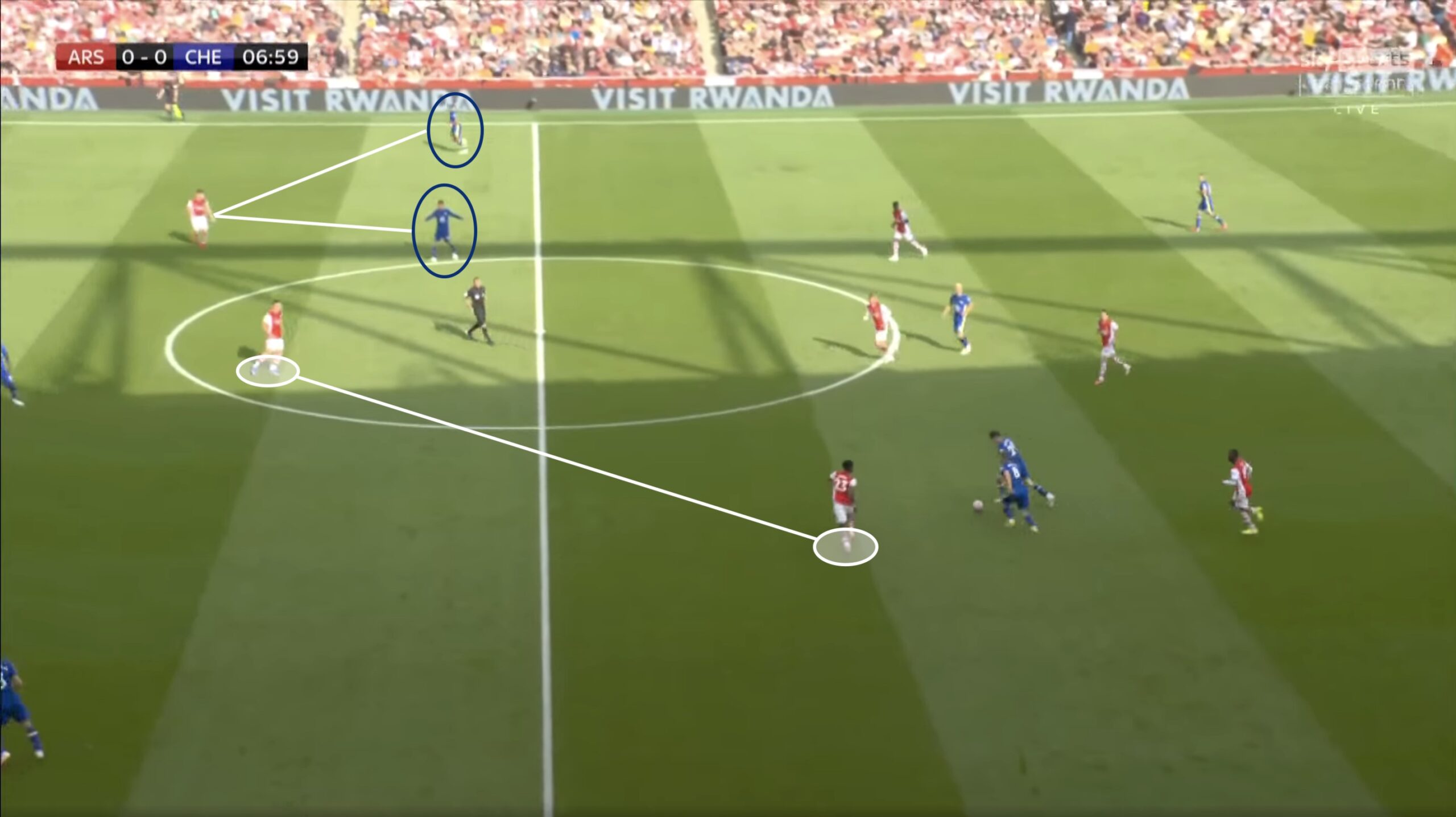 But again and again, Saka was focused on a potential pass into Azpilicueta, preparing to pounce. And Chelsea knew it. They didn’t play the ball sideways to the right-sided centre-half, instead finding gaps to carve through Arteta’s side. And as soon as they did that, Tierney simply couldn’t win. Whoever he went to, he was going to leave someone open. 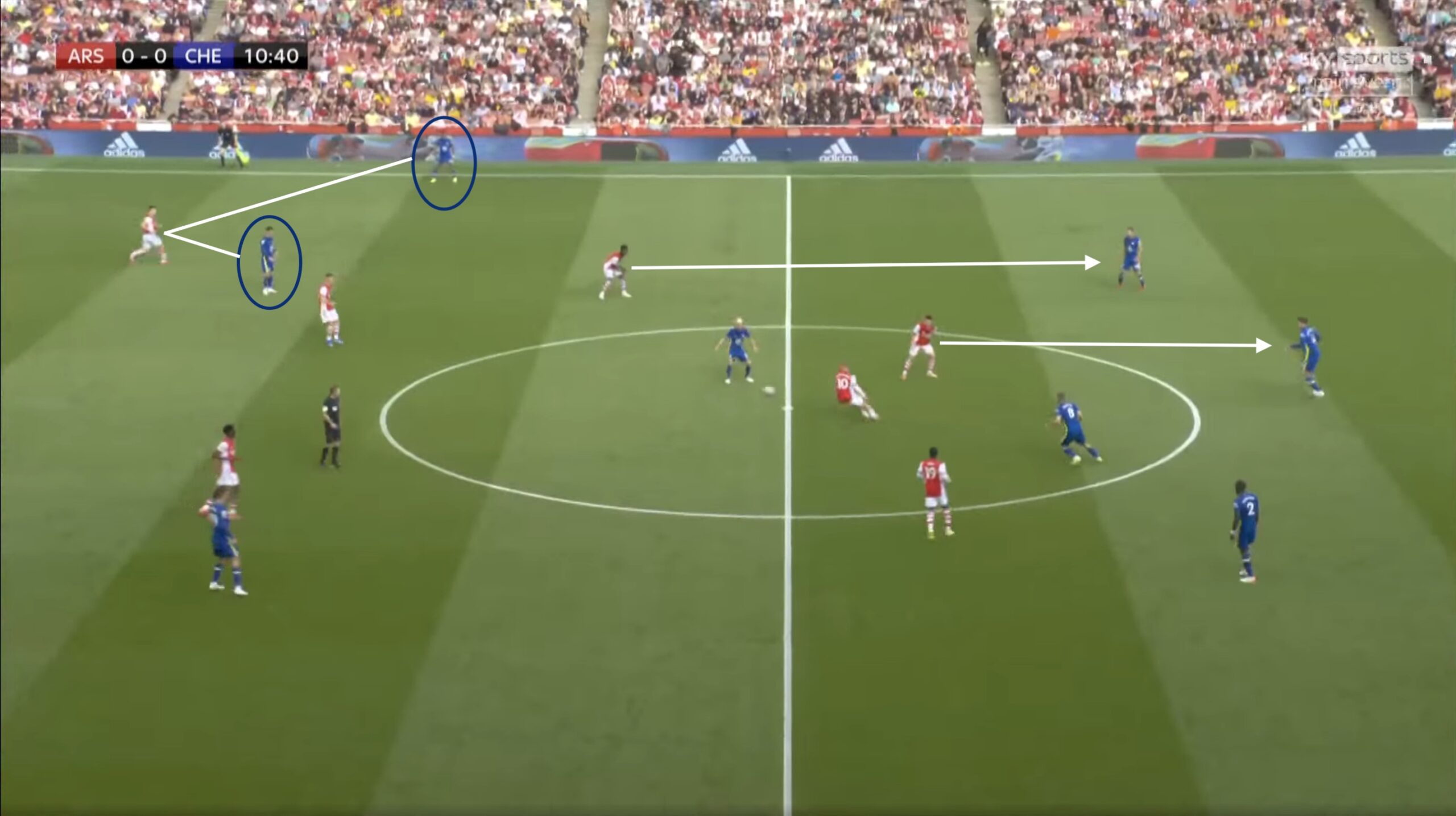 Arsenal just couldn’t stop Chelsea from building. Yet they didn’t stop pressing. Lokonga tried to join in, following Havertz upfield at times or pushing up to support Pepe against Kovacic and Rudiger at others, but Arsenal never really put Chelsea under threat on the ball and Xhaka couldn’t fully commit to tracking Mount because it would have left an enormous hole in midfield with Lokonga upfield. The gap between the pair was huge at times and not helped by Saka’s orientation constantly being based on the idea that he could harry Azpilicueta. 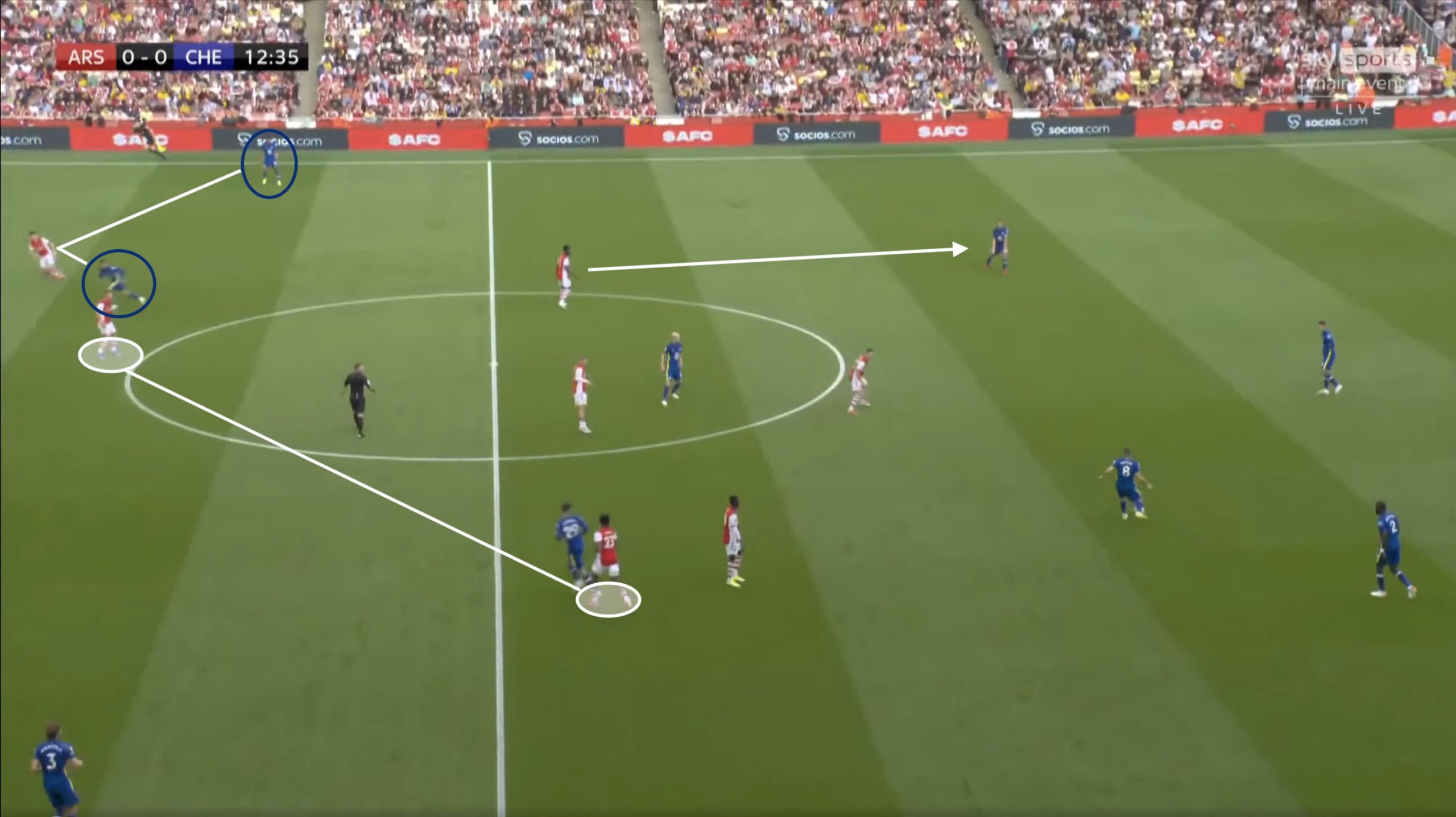 When Xhaka did play closer to Mount, allowing Tierney to press or mark James, the huge  space between the two midfielders only grew. 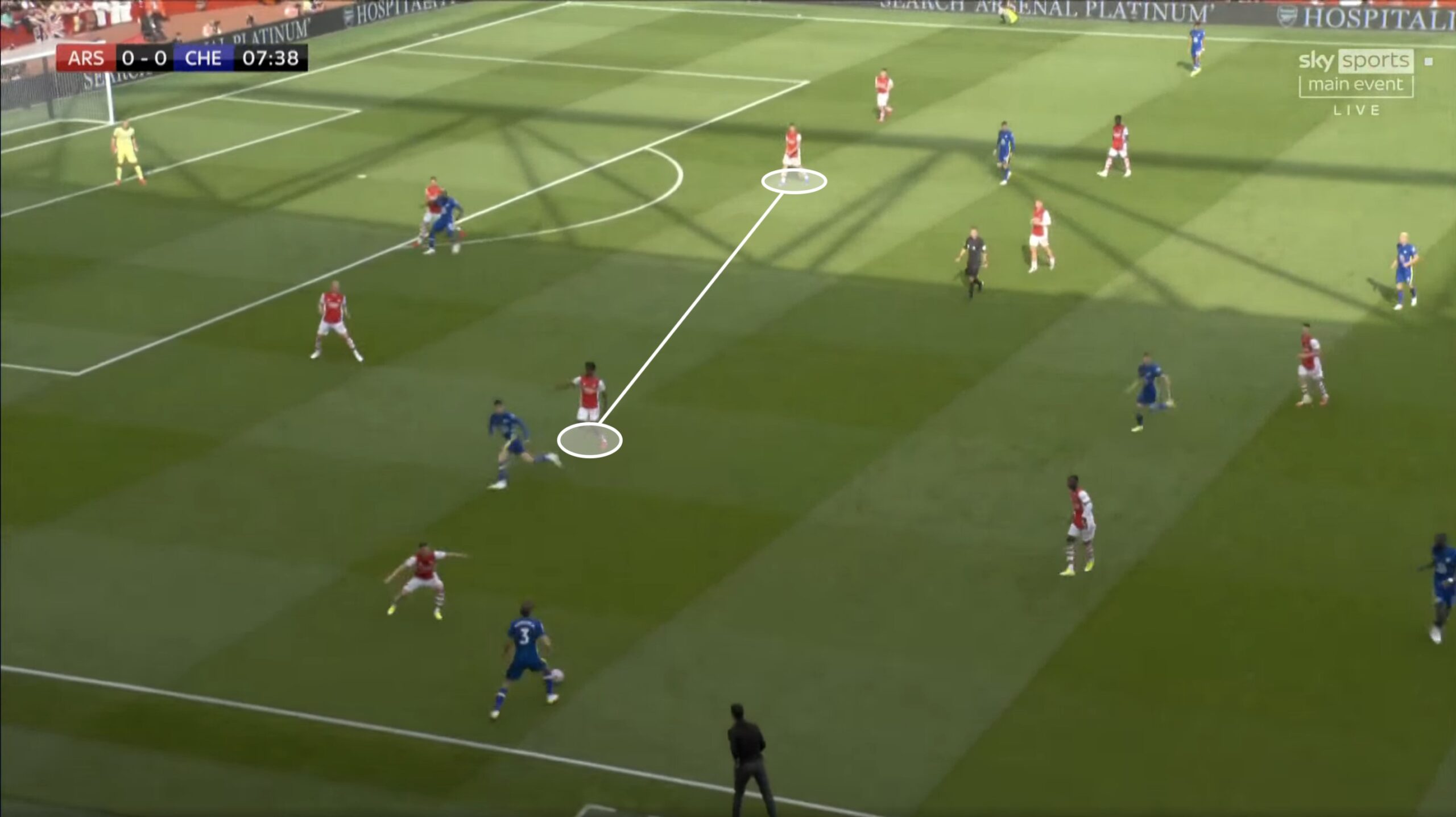 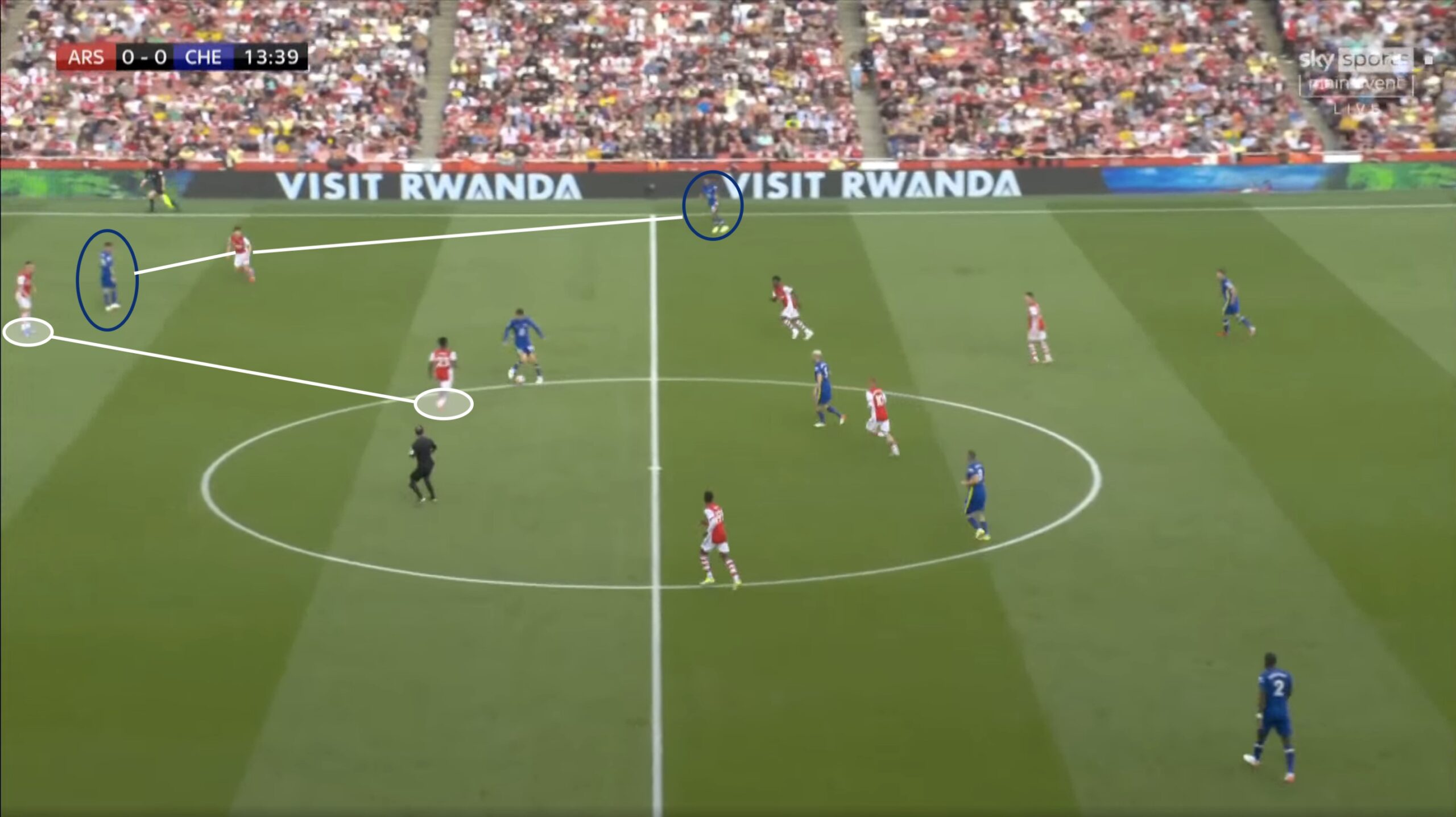 We get to the first goal and we see Saka again preparing to run towards Azpilicueta if he in case he receives the ball. But he doesn’t. It’s too easy for Kovacic to beat Martinelli, who also falsely anticipates a backwards pass and prepares to press it. With a simple feint, Xhaka can’t move left to help Tierney — the gap between the Swiss and Lokonga already makes a pass into Lukaku’s feet too easy. 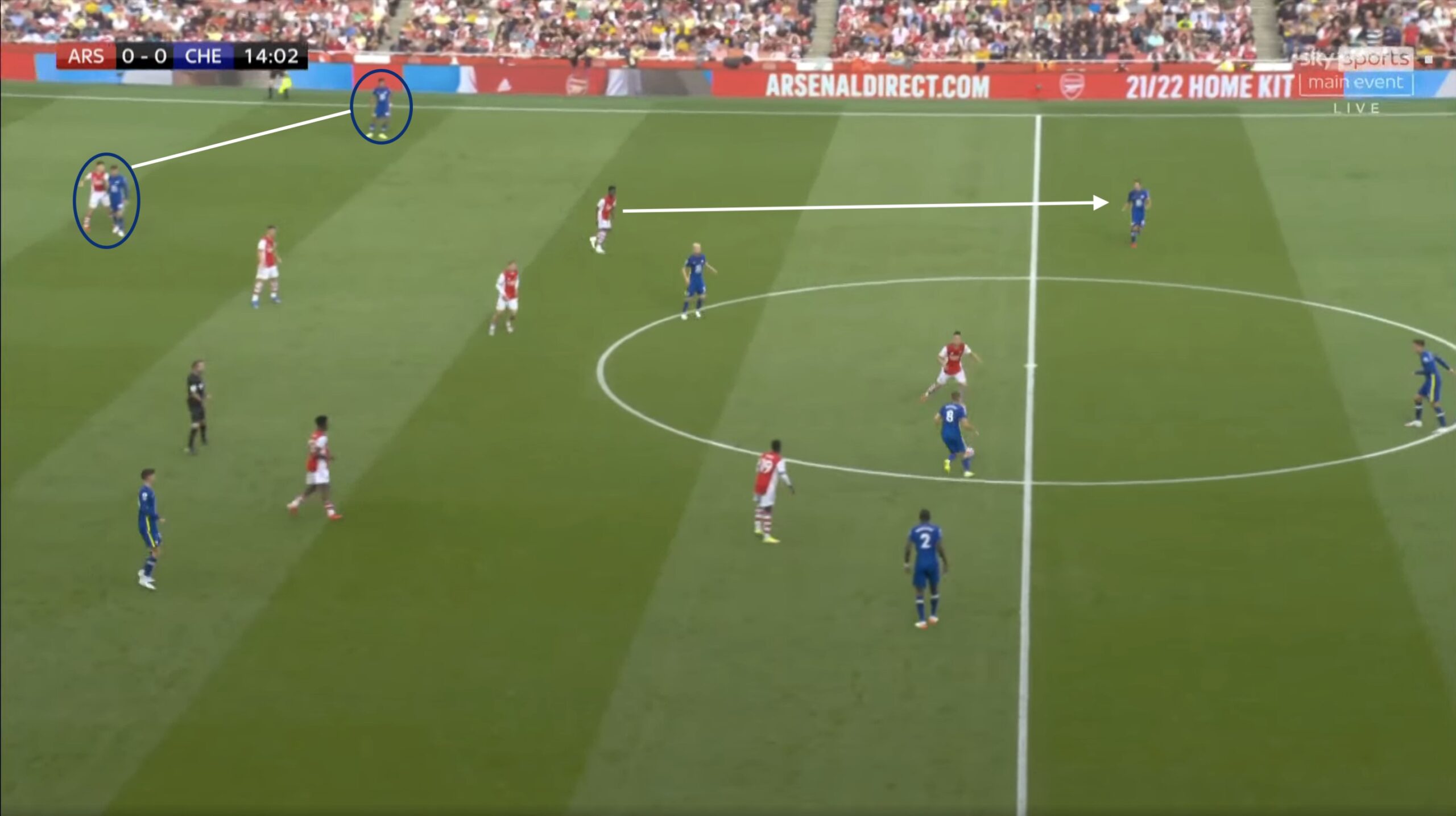 Incredibly, we’re only 95 seconds removed from the goal when Saka next wants to engage Azpilicueta but is again far too far from him to make any difference, leaving Tierney with his hands full once more. 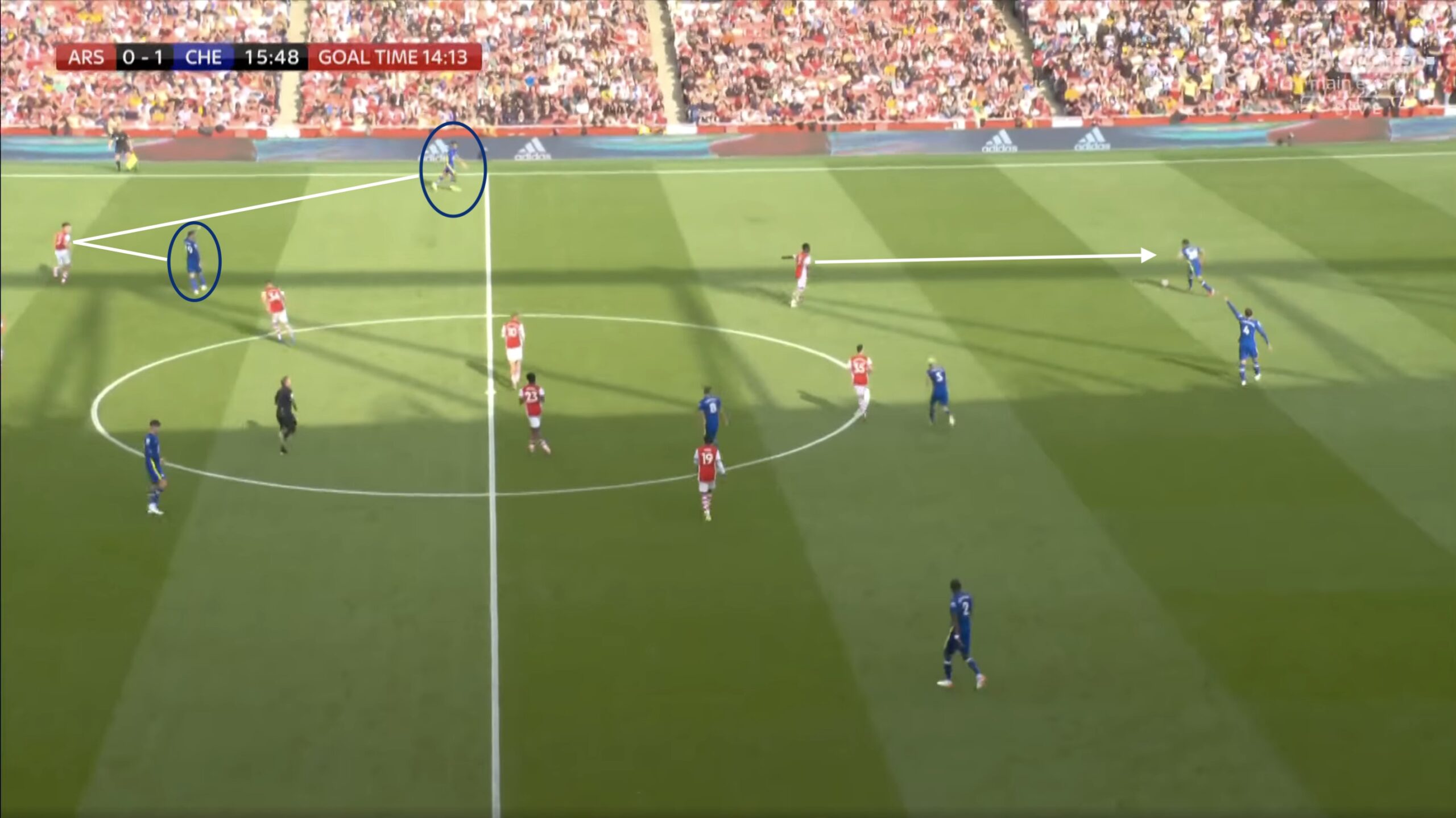 The pressing was poor all round and Arsenal didn’t follow the golden rule of retreating when they were being cut open, instead leaning further into pressing high. High risk even though they were getting no reward at all from the approach.

If the pressing isn’t good and the opposition are playing through it, at least focus on staying compact.

No individual is to blame for such poor organisation. On one side, Saka wasn’t ever really close enough to Azpilicueta to truly put him under any pressure when closing him down. On the other, Pepe was always far too easy to beat on the outside, failing to force Chelsea sideways or backwards and allowing players to receive the ball over his shoulder on a number of occasions. If his position is just a few yards wider here he forces a square ball to Rudiger inside his own box, instead, he allows Chelsea to play a pretty vertical pass to Kovacic, who has time and space to turn. 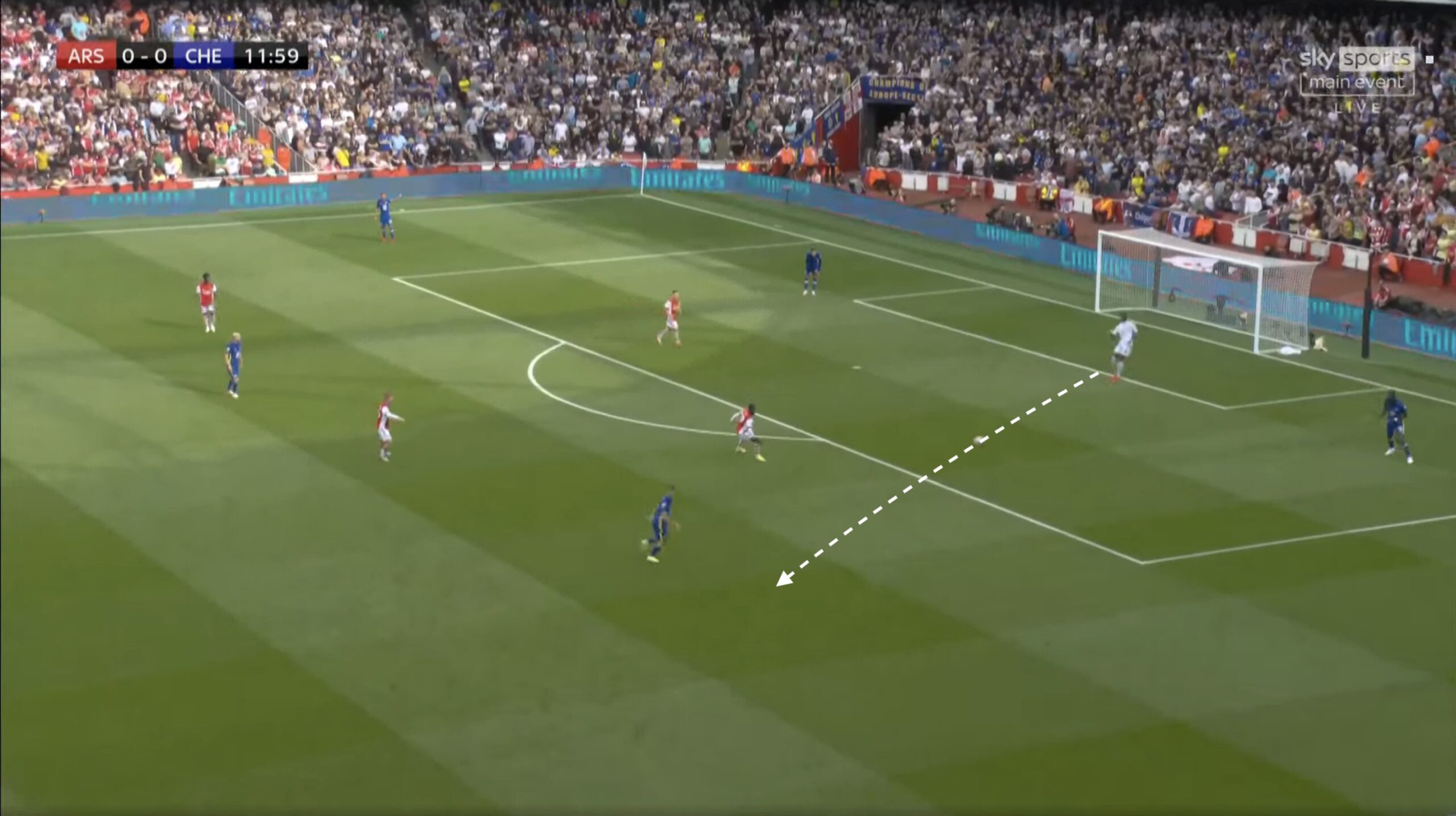 The same happened when Rudiger was on the ball, with Pepe failing to stop a pass into Marcos Alonso. Lokonga has been dragged forward to help the press but adds little by marking a man already covered by Emile Smith Rowe. For some reason Pepe is there too. The ball goes wide, which might be better than through the middle, but Alonso has all the time in the world to receive the pass on the front foot, get his head up, and look for Lukaku. Again, Pepe can make Chelsea’s life much more difficult just by moving a few yards wider. 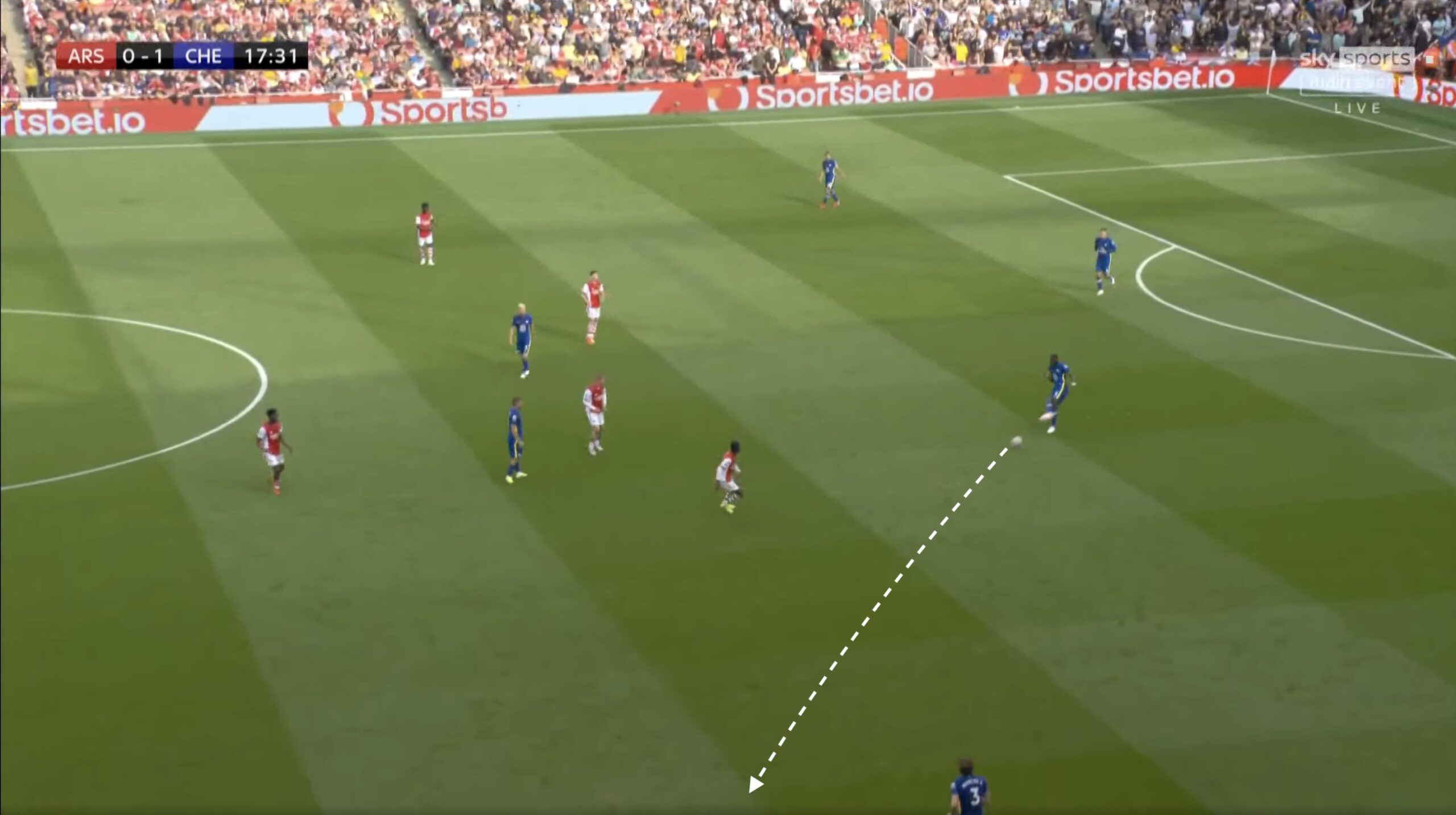 And, of course, with the press broken, Tierney is outnumbered once again as Xhaka comes across to close Lukaku down. 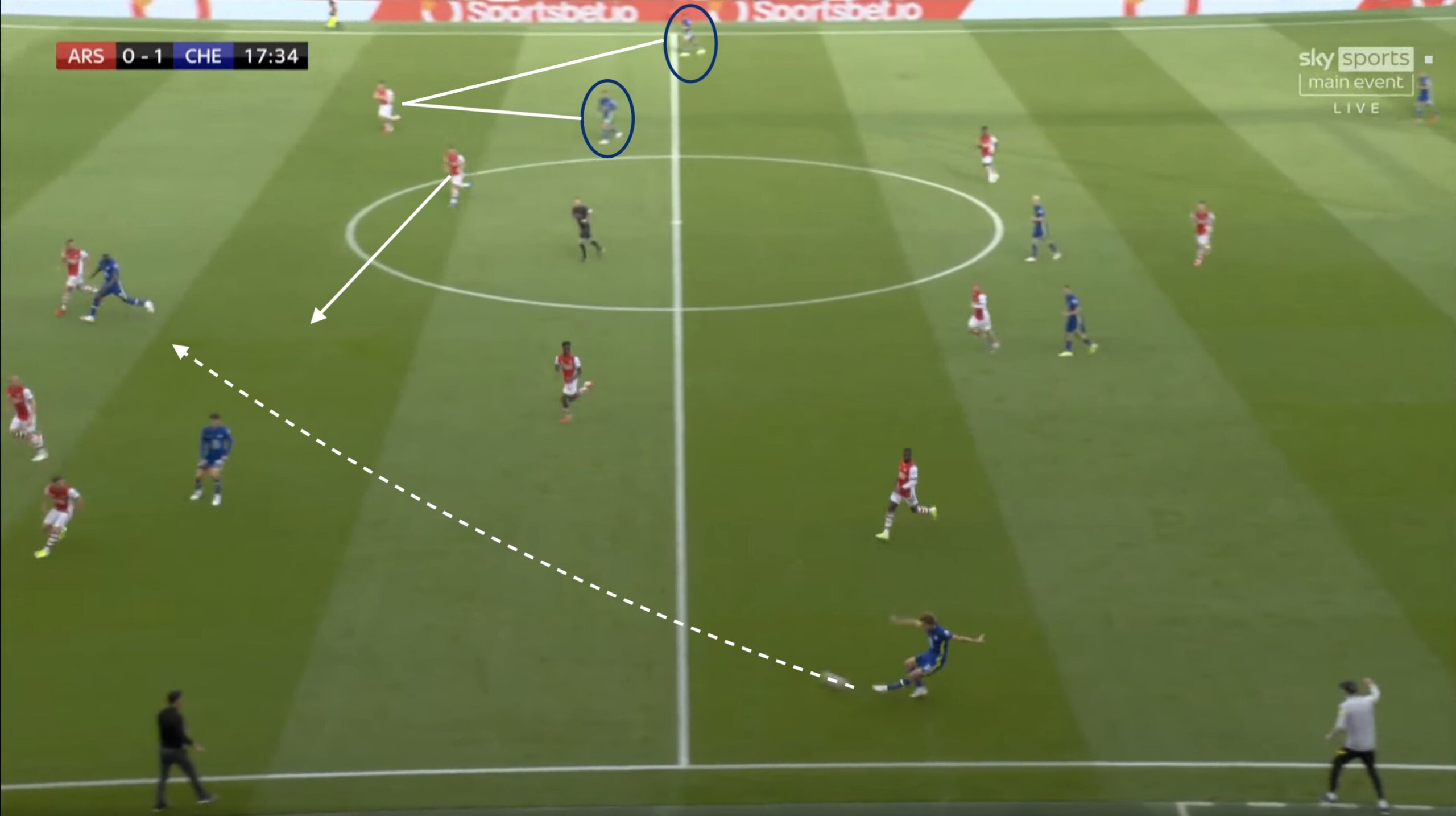 This was no one-off. Lokonga was dragged upfield again a few minutes later, occupying the same space as Pepe, but between them the pair do nothing to prevent a simple out ball for the man in possession. Two very simple passes later, Havertz has acres of space to turn into and drive. 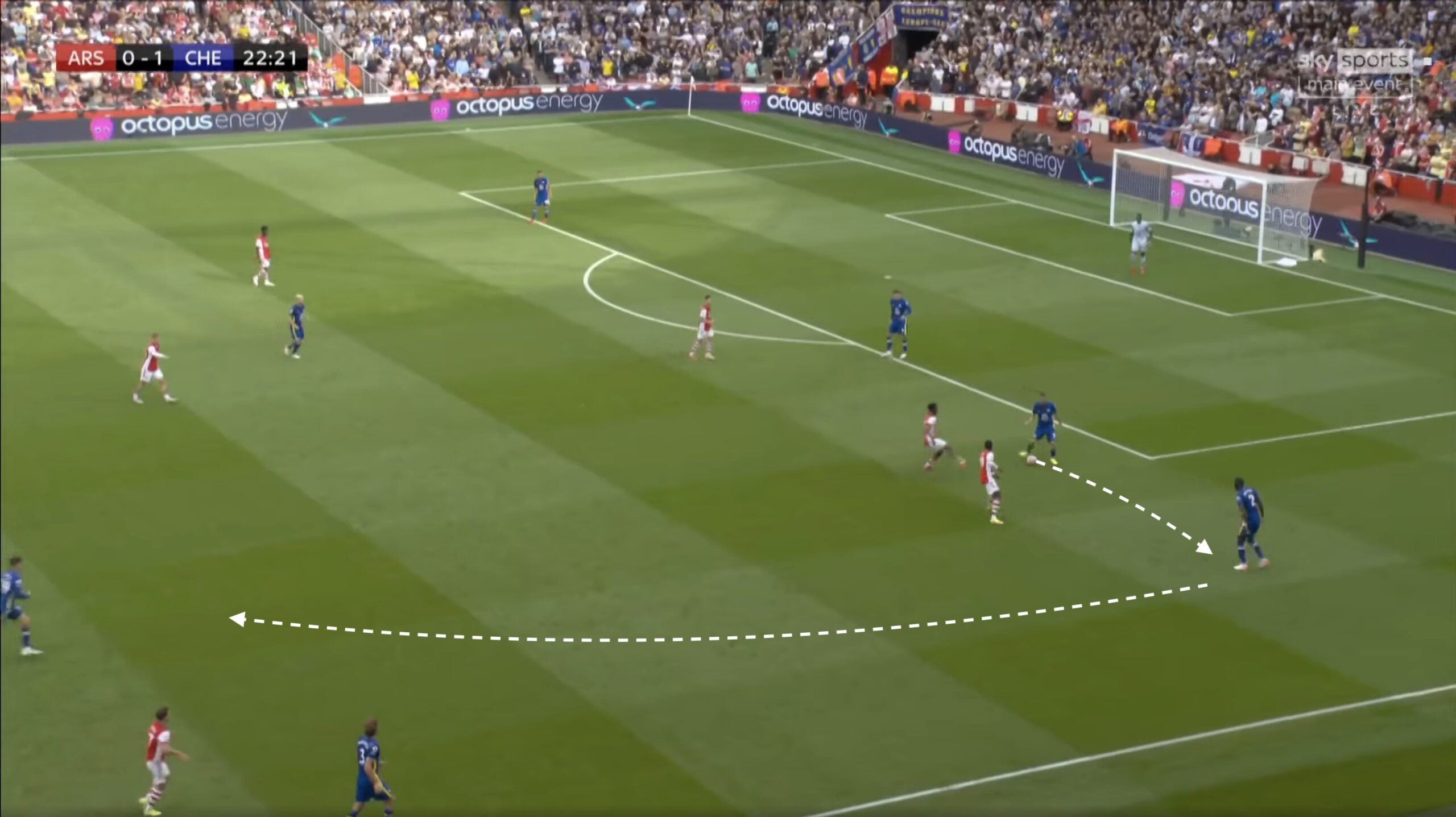 And, yet again, he can find two Chelsea players leaving Tierney with an impossible decision to make on the other side of the pitch. James should have had another assist but failed to find Lukaku when the opportunity for a carbon copy of the opener presented itself. 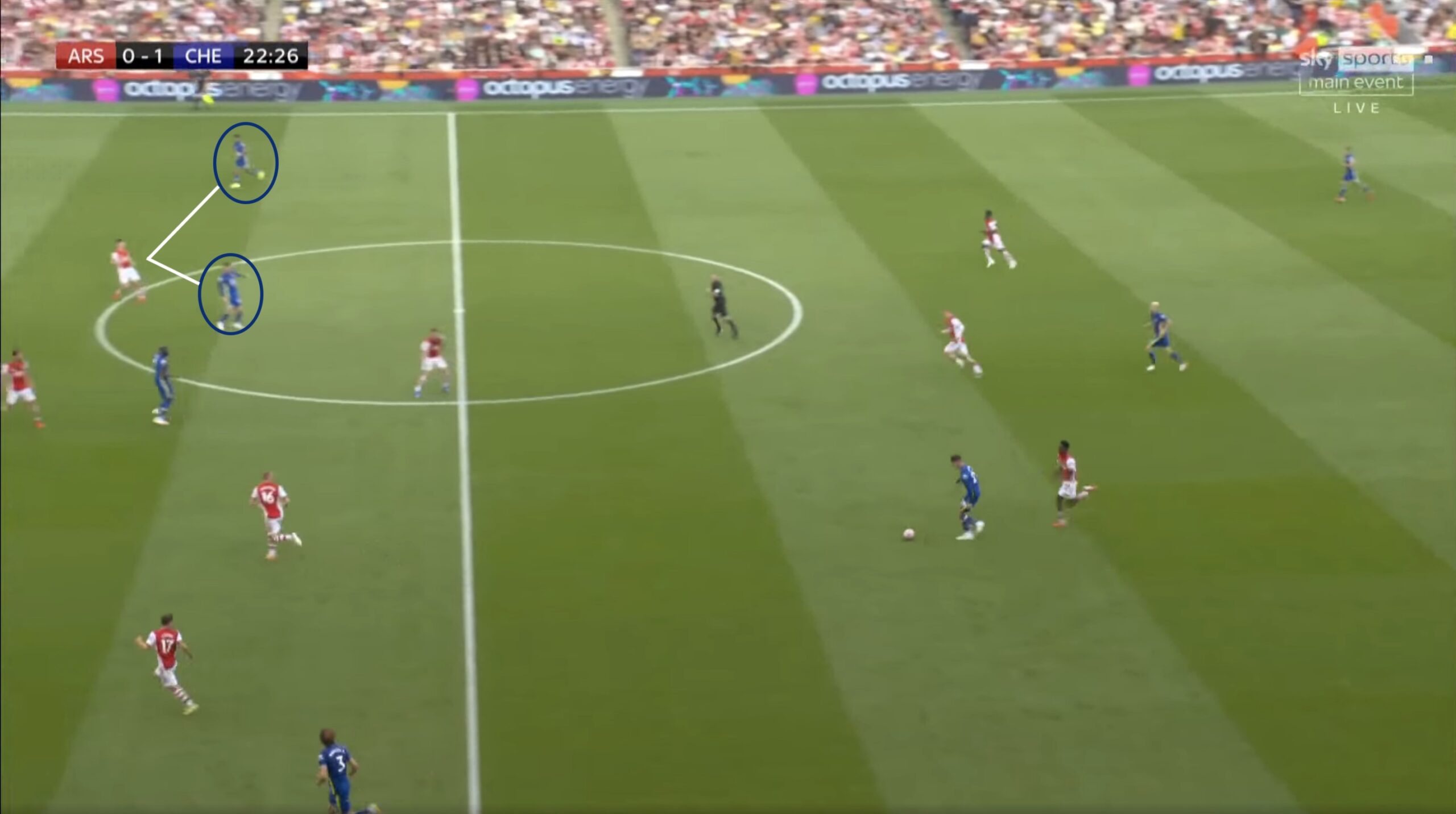 It’s easy to look at individuals on replays and wonder who hasn’t tracked their man but that wasn’t the issue at all on Sunday. Arsenal weren’t good enough as a collective, were too easy to play through at the top of the pitch, and that left Tierney in particular with an impossible task.

Had Xhaka helped him more, there would have been even more holes in midfield, more space for Lukaku to drop into and receive the ball to feet. Had Tierney stayed wide and tracked James, Mason Mount would have been free centrally as Pablo Mari continued chasing and grappling with Lukaku’s shadow.

If the team can’t press better than this, there is no point trying it. It is down to the manager to train them in how to push further upfield and not leave their team-mates exposed if that’s the approach he wants to adopt. And if he can’t make huge strides quickly, he will be better served dropping the idea altogether.