Last week I took a look at the changes to Arsenal’s left-hand side. They didn’t cover themselves in glory at Watford on Sunday, particularly defensively, but Gabriel Martinelli did still get on the scoresheet. The Brazilian has struggled for some fluency in his game lately but took three shots against Watford and four against Wolves the week before: suggestions that he is struggling out on the left feel a bit premature.

Anyway, focus after Sunday (and after last week’s piece) now turns to the right flank and how the interactions between Martin Odegaard, Bukayo Saka, and Cedric Soares are helping Arsenal go to a new level.

Saka was already a shining light for Arsenal last season but only lately has he come into his own in terms of end product. With the team previously focusing a lot of its play play down the left, with Kieran Tierney overlapping on that side, a lot was asked of the right winger. With Takehiro Tomiyasu not overlapping on the right and Martin Odegaard often too reluctant to make runs off the ball and too slow to move the ball, Saka suffered, often left to beat two or three men alone.

This was particularly obvious in games against West Ham and Norwich in December. The England international would receive the ball and Odegaard would offer an option inside but rarely make a run to drag a defender away, making it too easy for Saka to be outnumbered. 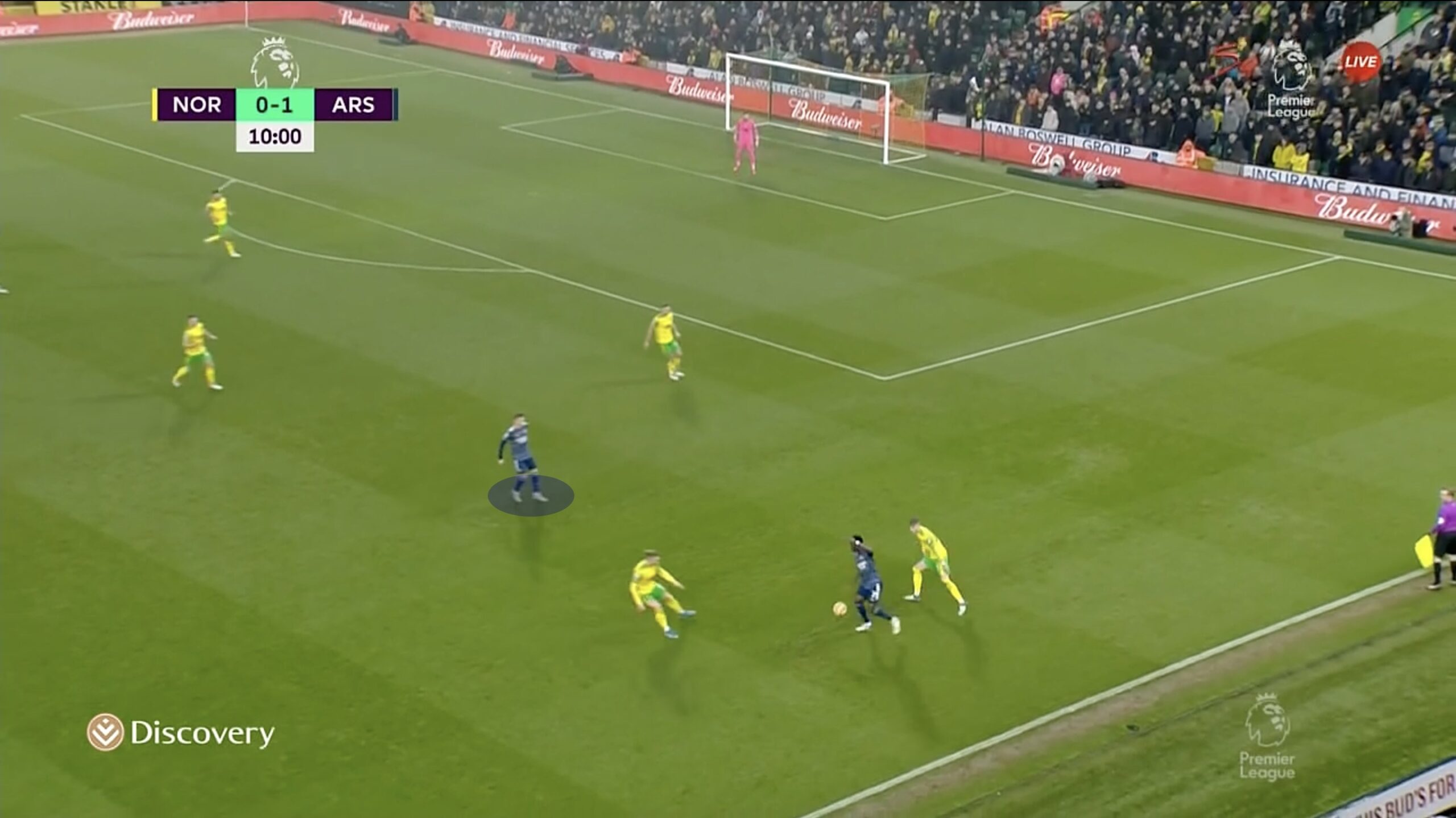 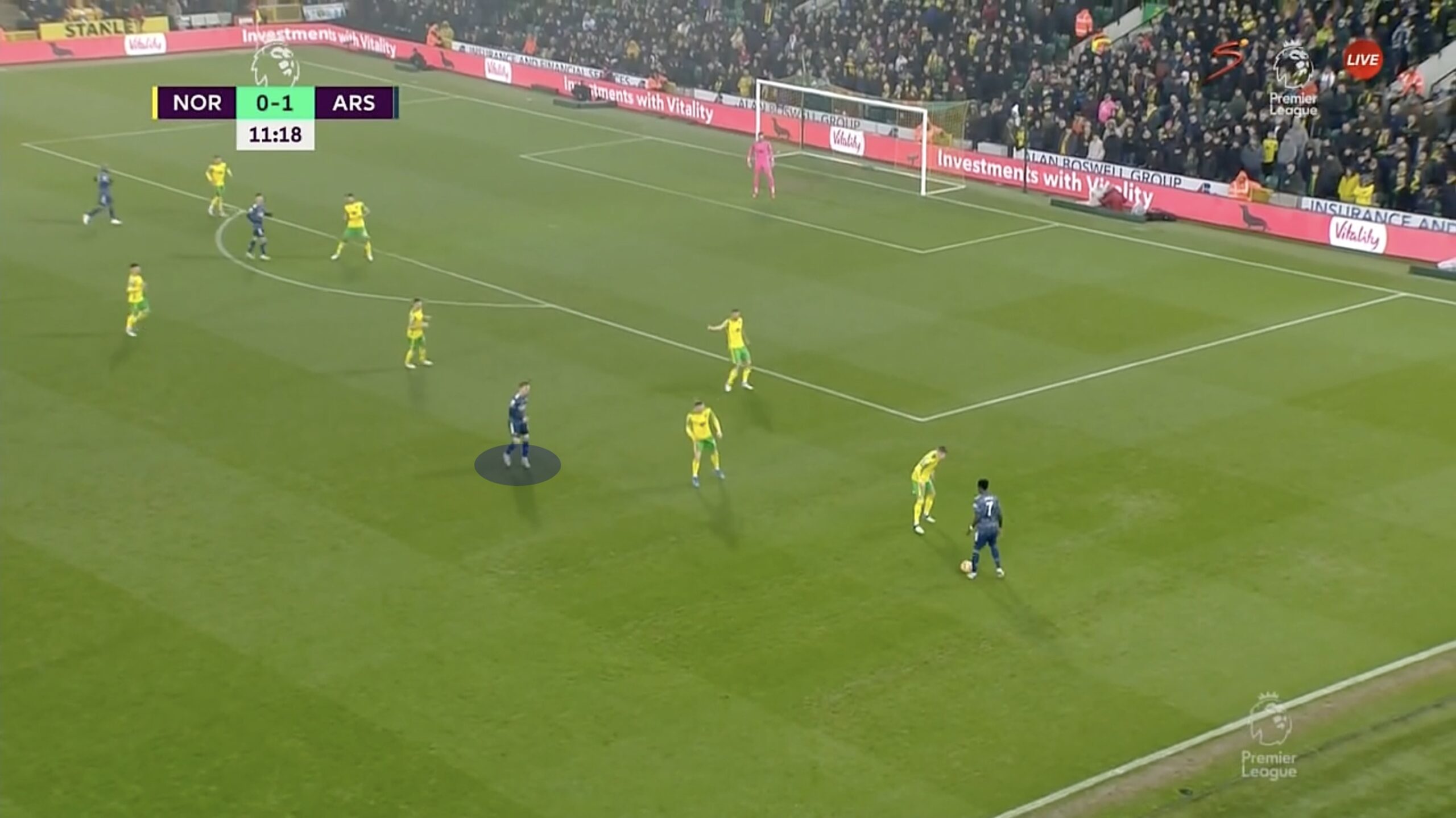 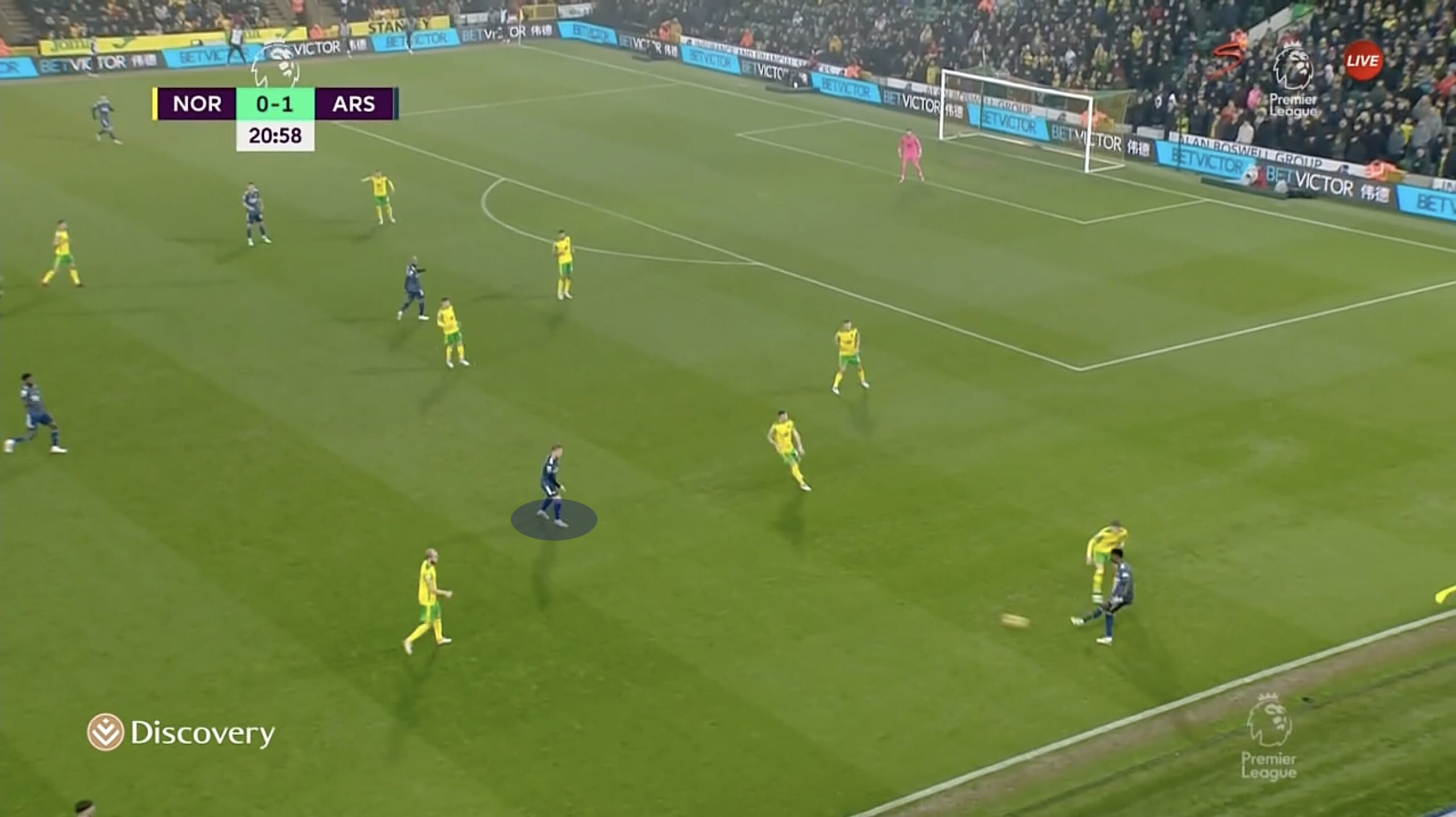 The issue was exacerbated by Ben White playing at right-back at Carrow Road and offering no threat on the overlap. 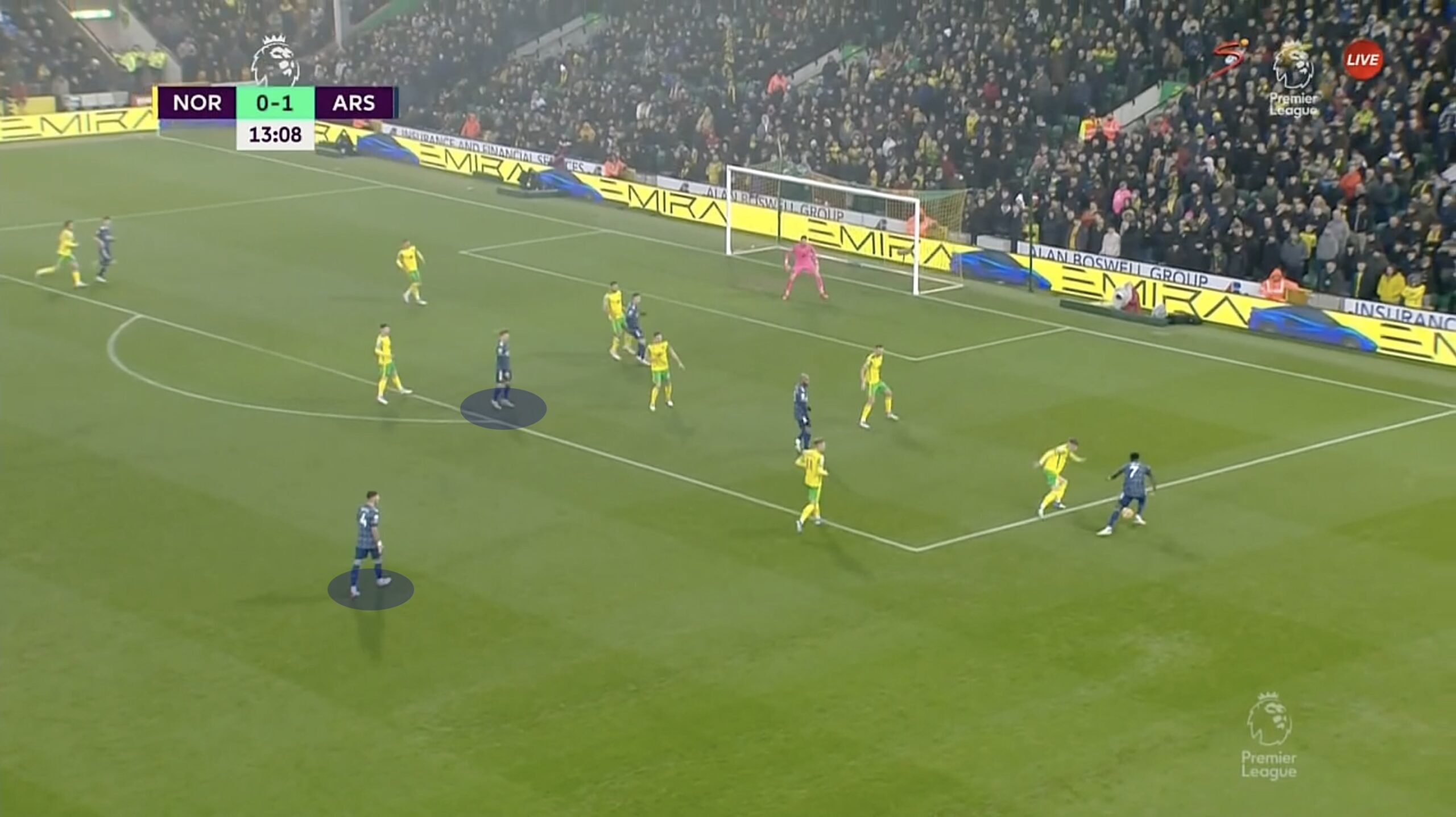 At times Odegaard would drift wide but he would do it to collect possession, not in an effort to drag defenders away from Saka. That seems to have changed completely and the Arsenal right, like the Arsenal left, is now playing with so much more variation. More variation means more demanded from the right-back, sure, but it also means Saka’s moments on the ball are less isolated, with fewer defenders, and often coming further upfield as Arsenal push teams back.

When Saka is on the ball, he is getting more opportunities to be decisive. Compare the static moments against Norwich above to the off the ball effort made by Odegaard here to take a defender away. 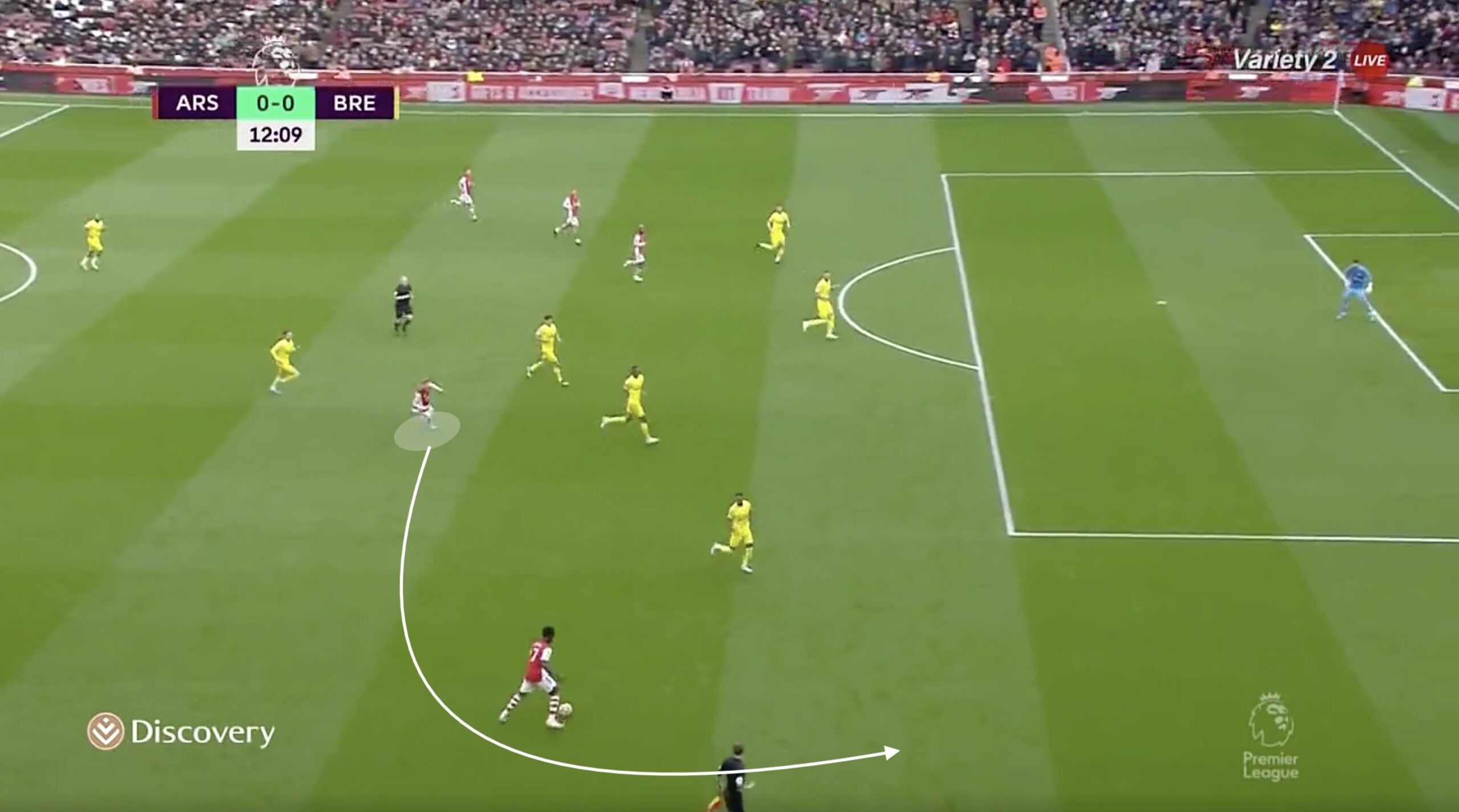 He gets around Saka and two Brentford defenders end up on top of each other as they cover the overlap, opening a gap for Saka to find Emile Smith Rowe on the edge of the box. 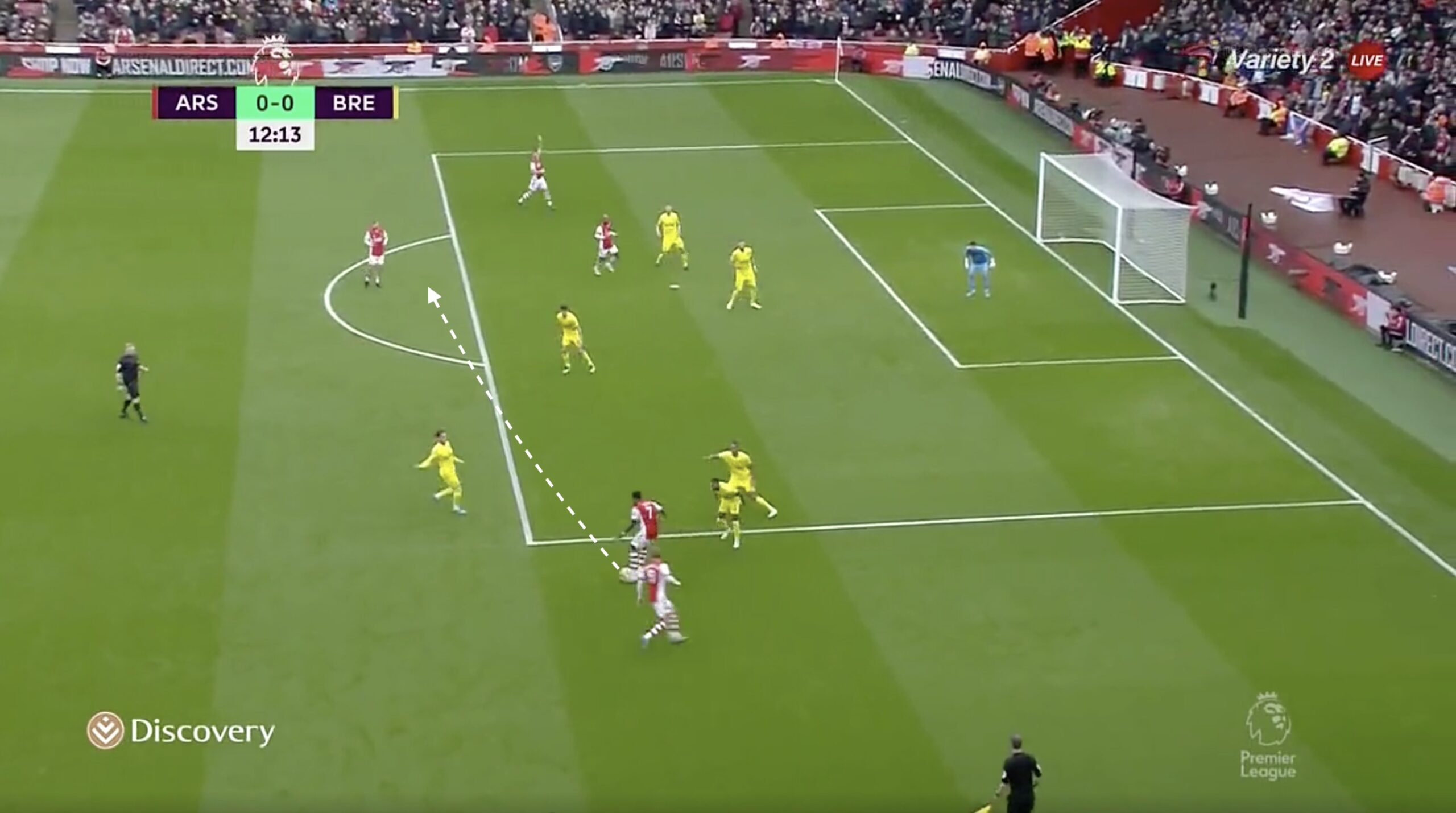 Smith Rowe found Granit Xhaka and he found Alexandre Lacazette, who scored only for the goal to be disallowed for offside.

But that run from Odegaard has become increasingly common, with the Norwegian making a big effort to sprint around the back of Saka to either offer a passing option or open up space for the Hale End graduate to cut inside. 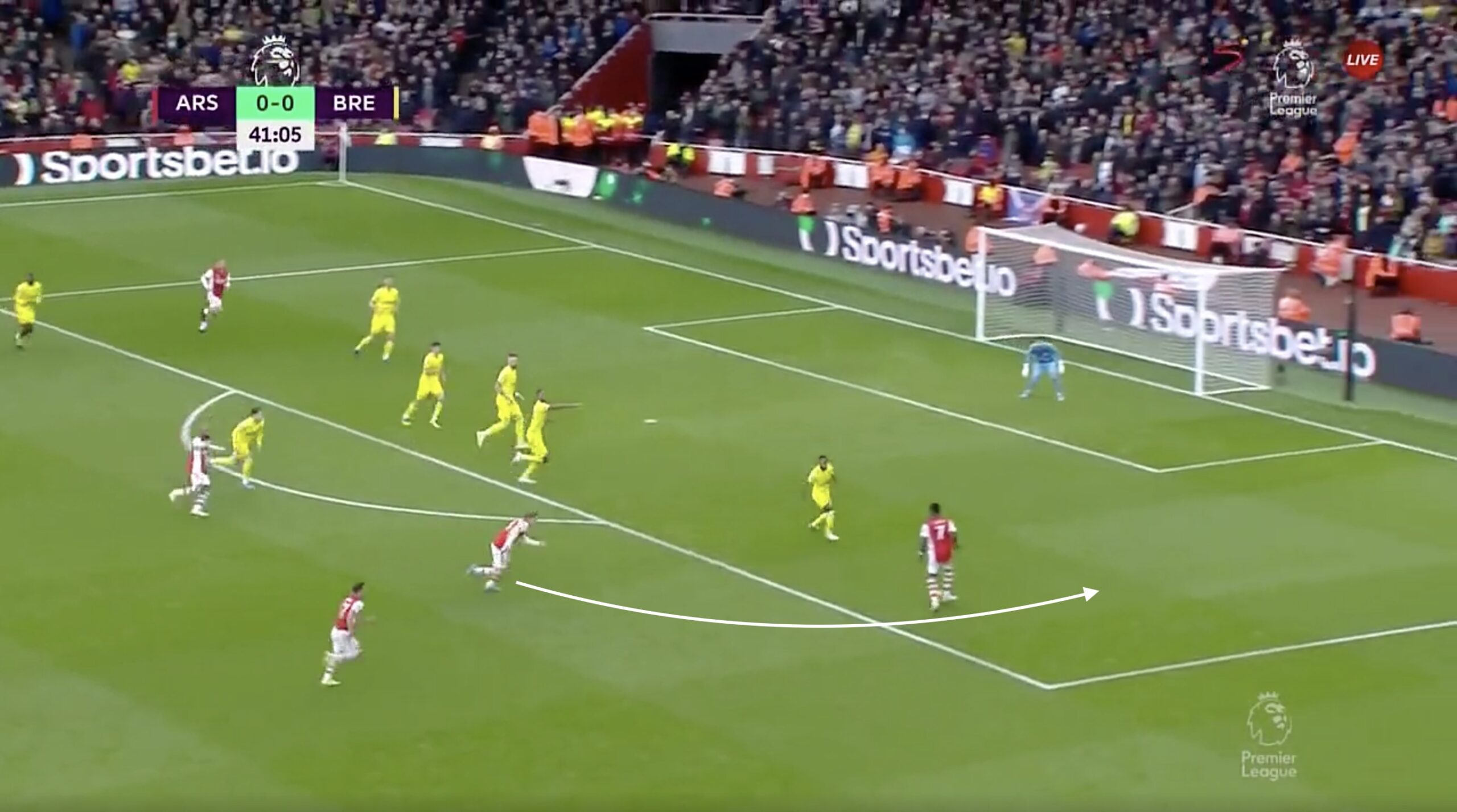 Here he chooses to go it alone, probably wrongly with Odegaard in space. 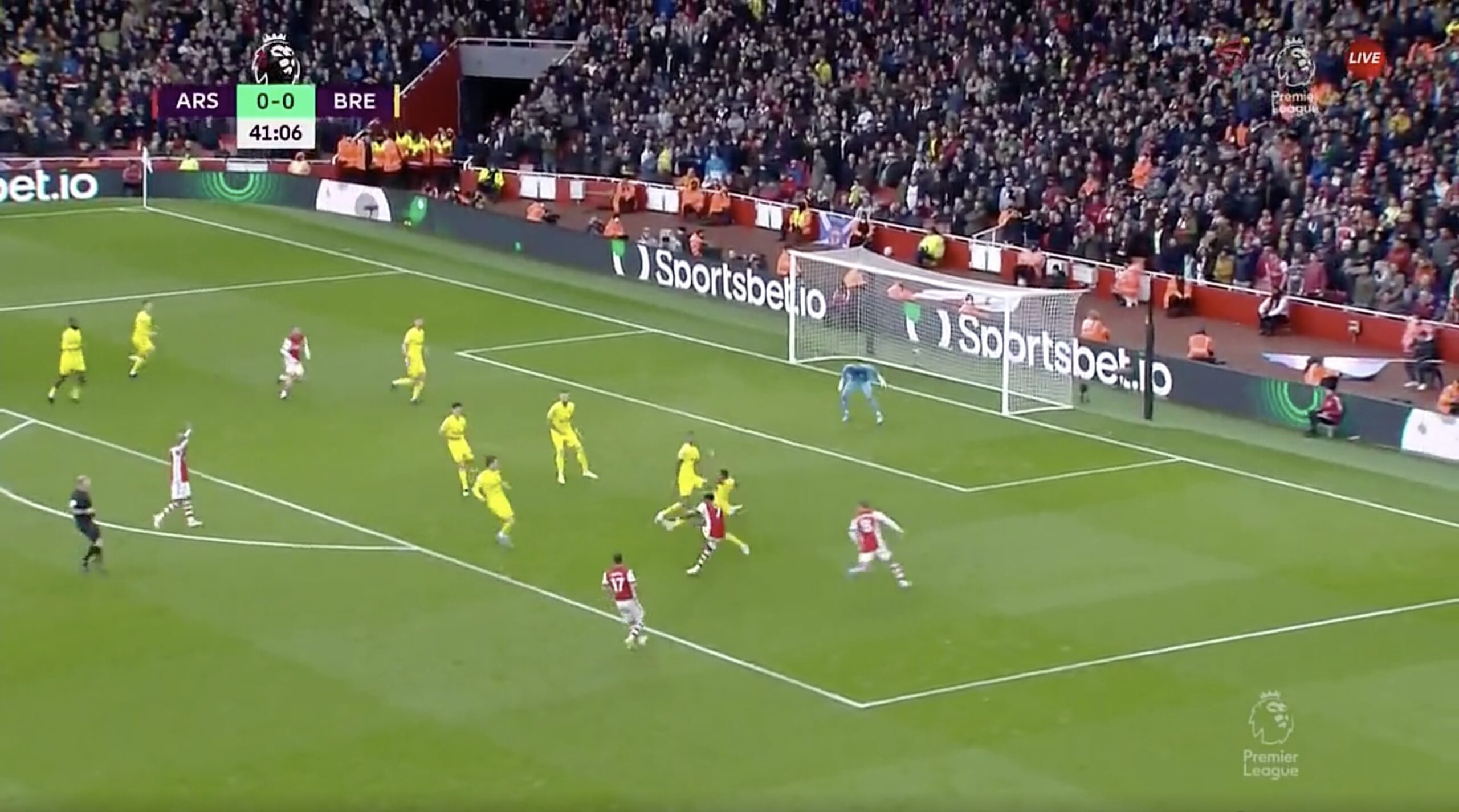 The Norwegian even made a real effort to get outside Saka at Carrow Road, underlapping rather than overlapping, before ending up on the outside of the winger. At the same time, Lacazette moves back into the box to take another defender away. Such runs look and are so simple and it immediately makes it harder for Norwich to double up on Saka, who cut inside to score (00:57-1:09 in the video below).

🍿 Watch all of the best moments from today’s game 👇

And further help is coming from right-back as Arsenal stretch teams on that side of the pitch.

In the scene below, Odegaard leaves Joao Moutinho’s shadow to receive the ball from Ben White. In turn he drags a defender out of the five-man backline. Saka makes a run into the gap, with the two defenders either side of him stretched by the far-side positioning of Lacazette through the middle and Cedric’s overlapping run on the flank. 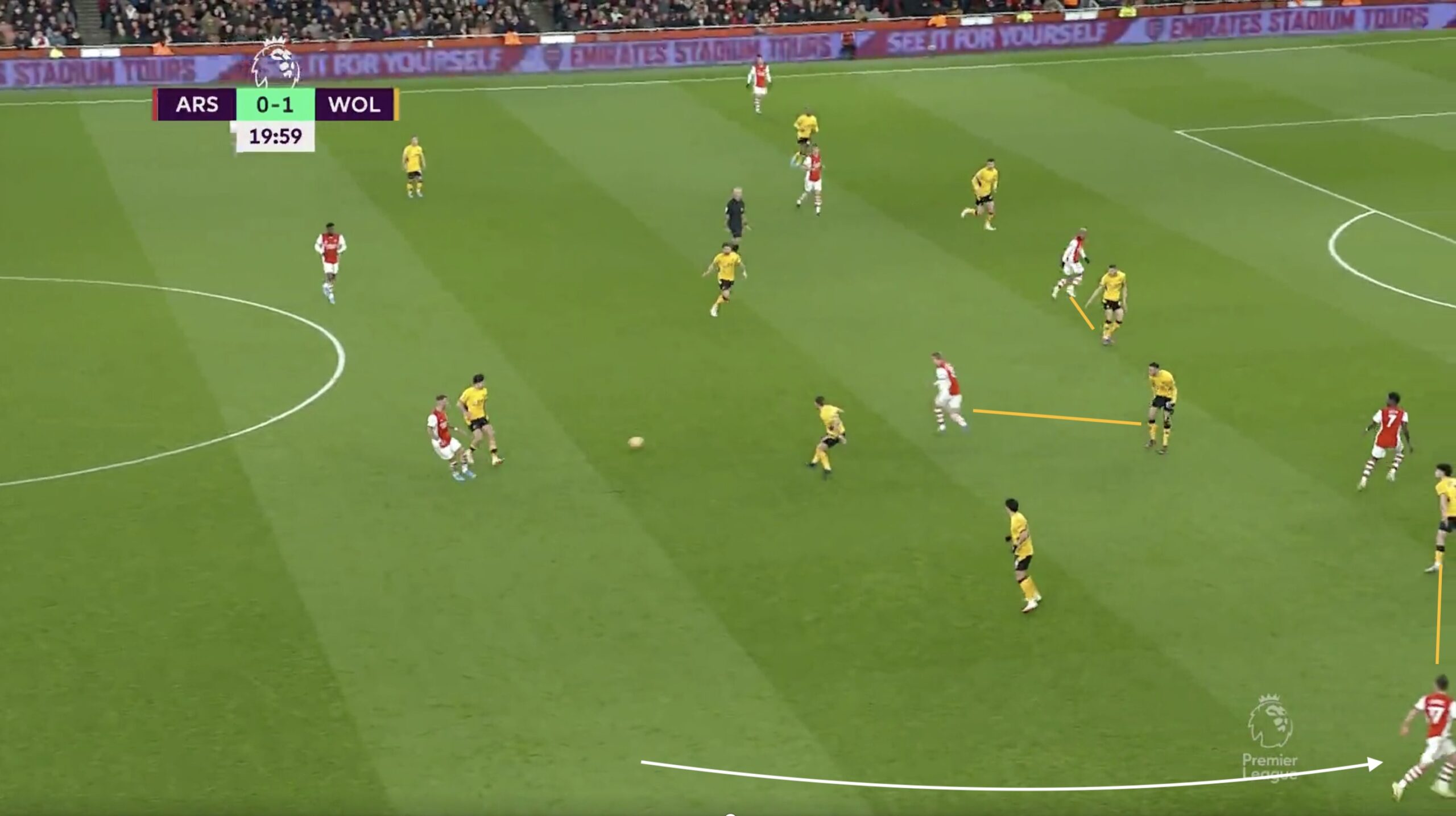 Every defender is left asking themselves if they should close a gap and leave a man open. These are the sort of questions opposition defender didn’t have to ask a more static Arsenal last season or early on this season.

At Watford there were times when Saka had Cedric going outside him and Odegaard, the traditional set up you might expect from a winger cutting in, a midfielder inside him, and a fullback outside him. Odegaard is no longer looking to drop off and ask for possession outside the area every time Saka looks inside and it means the winger isn’t being crowded by defenders. 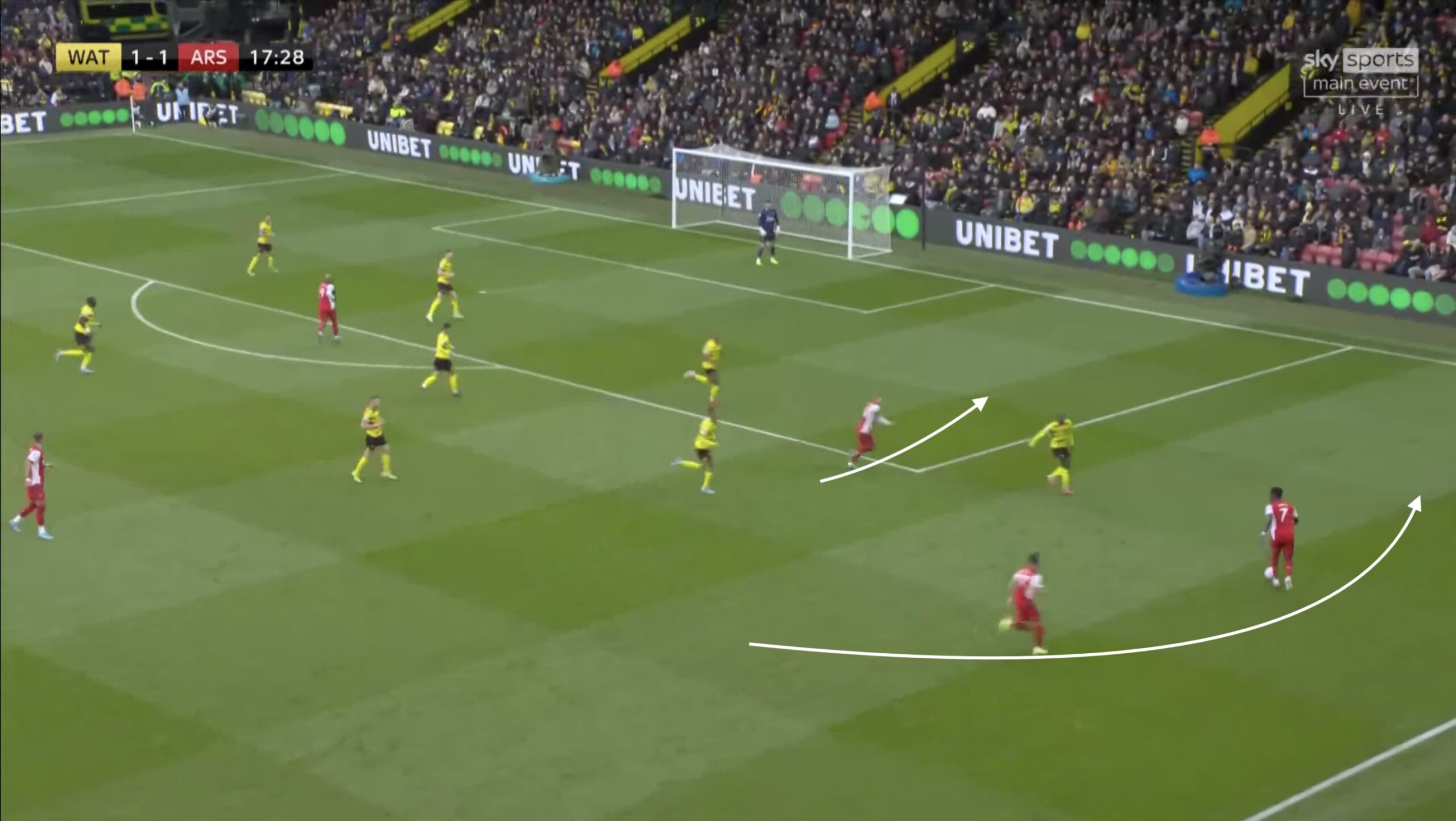 With players around him, Saka can take a defender on one-v-one or he can combine quickly so someone is released into space. 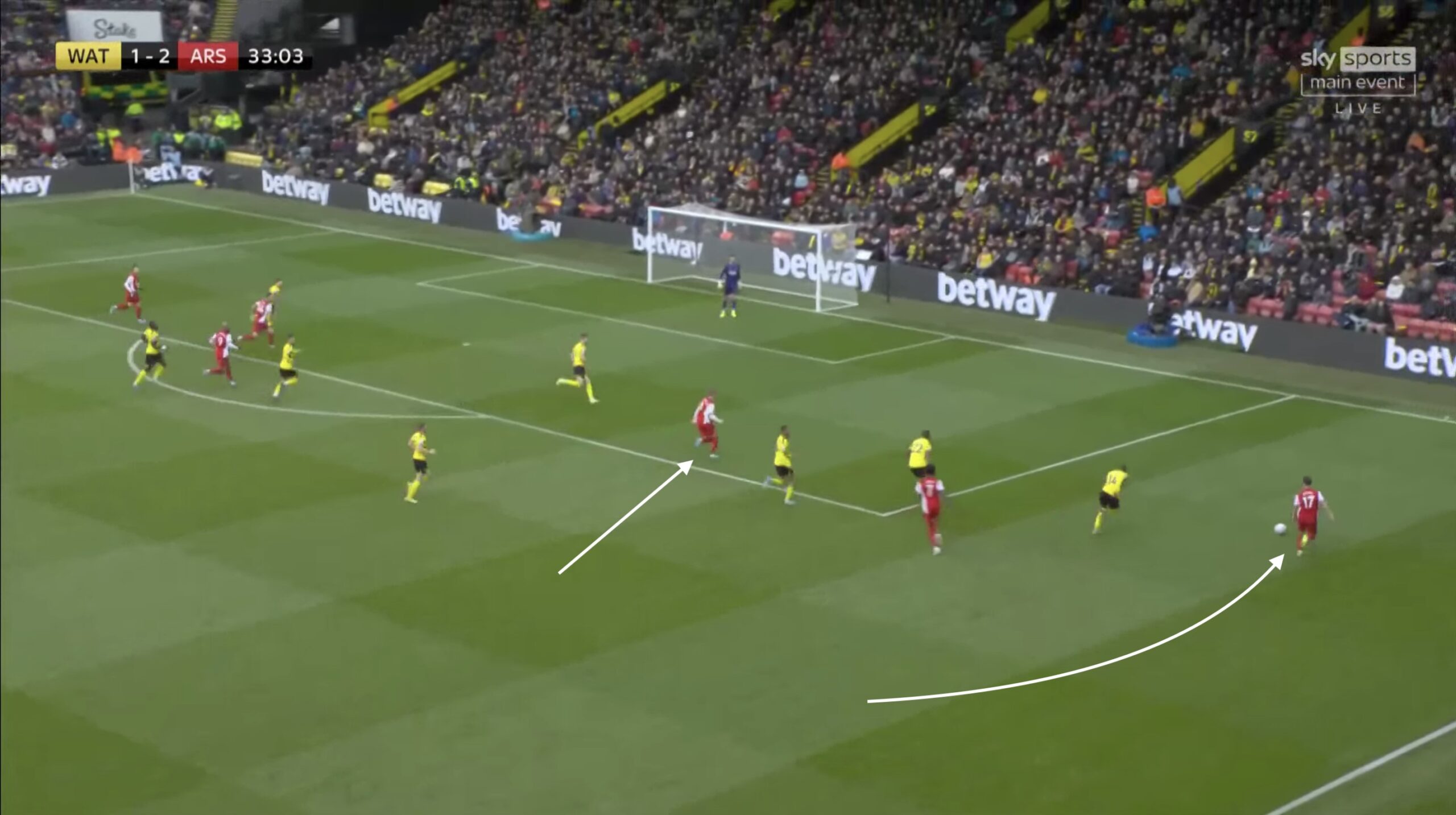 Those deep runs from Odegaard may not look well suited for receiving the ball but they do pin defenders back, opening a space behind him for a team-mate to arrive in space for a cutback.

And there are less traditional movements too. Like on the left, the channels are always filled, just not always with the same constellation. When Odegaard drifts wide, it can be Cedric making the driving run through the gap as Saka drags opens the gap between two defenders. 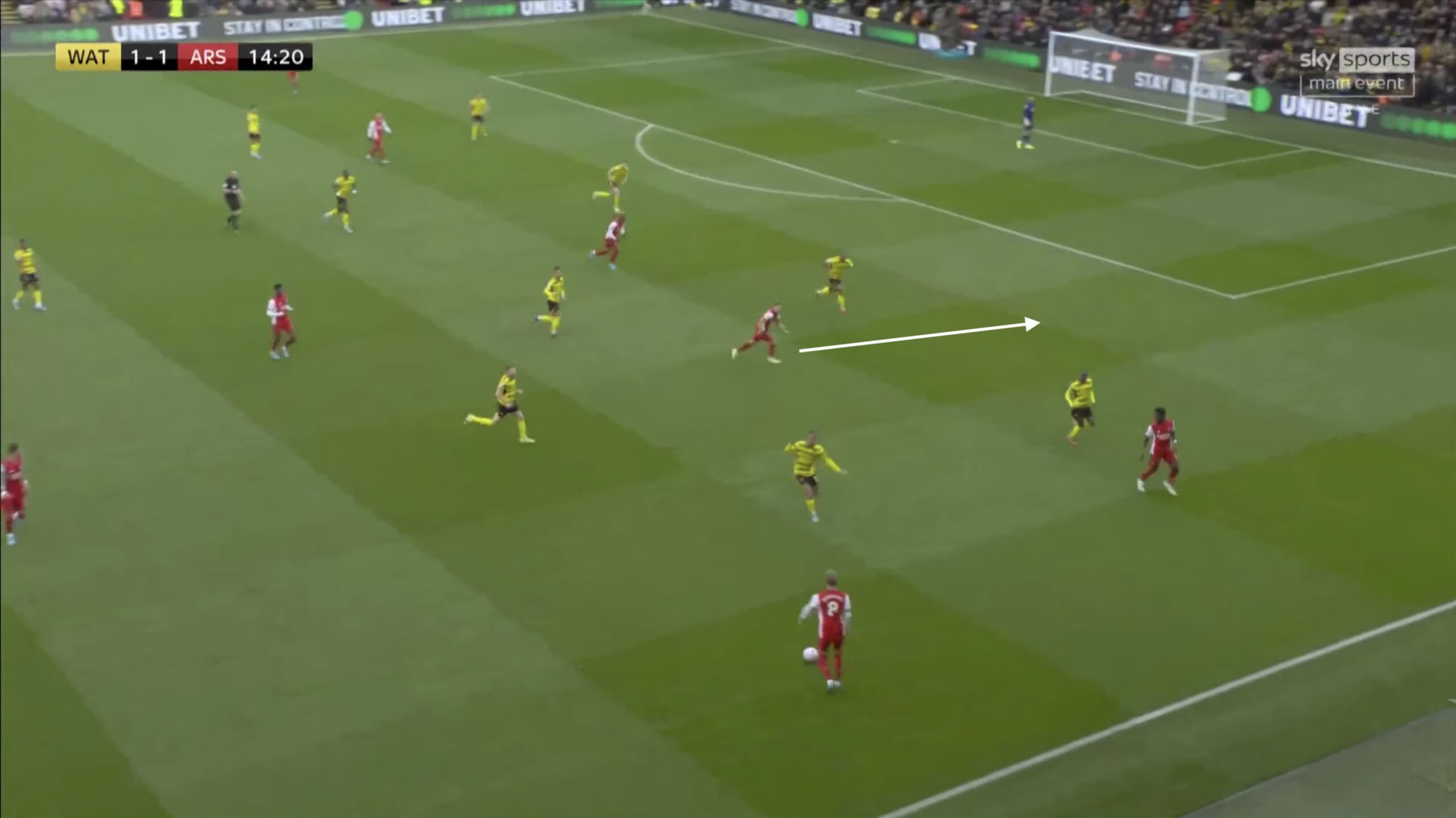 Or, indeed, Cedric making the same run inside with Saka in possession on the flank and Odegaard making the run down the line to open up a gap centrally. 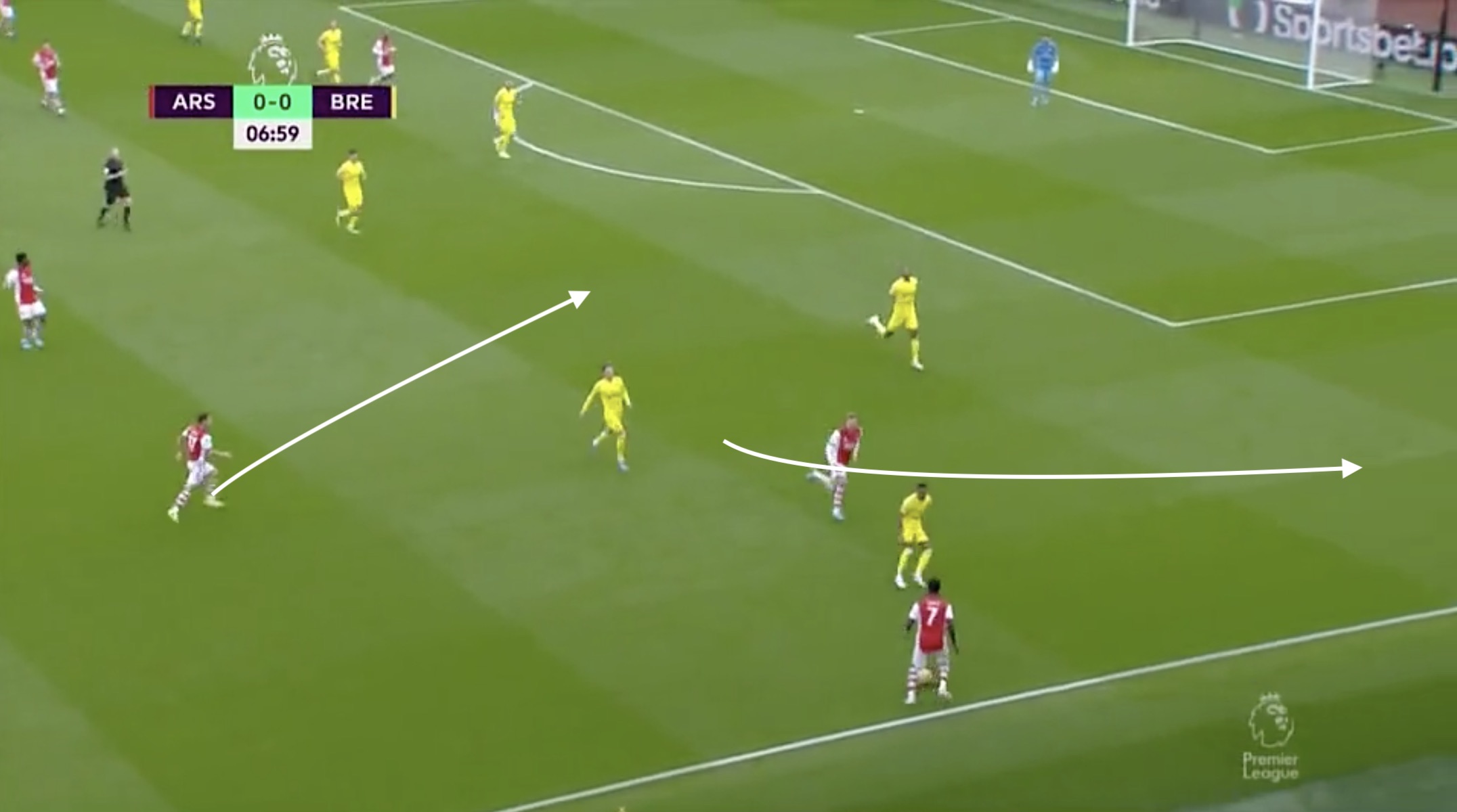 With so much more movement off the ball on the right, Arsenal are getting more out of not just Saka but all three players down that flank as they interchange positions to make runs wide and into depth, stretch defences, and play much closer to each other than before to allow Saka’s superb dribbling or combination play with Odegaard to be used to full effect.