Tactics Column: Variations on a theme on the Arsenal left

One of the major criticisms throughout Mikel Arteta’s first two years in charge of Arsenal was that everything was far too predictable. Arsenal almost always lined up with a back four — save a spell with a three-man backline — where players on the opposite flanks did different things.

On the left, the left-back played like a winger, with the wide midfielder cutting inside as a sort of second striker or second number 10, depending on who was playing. The central midfielder on that side of the pitch. On the right, the winger stayed wide, as did the nominal ‘number’ 10′, with the right-back tucking in. 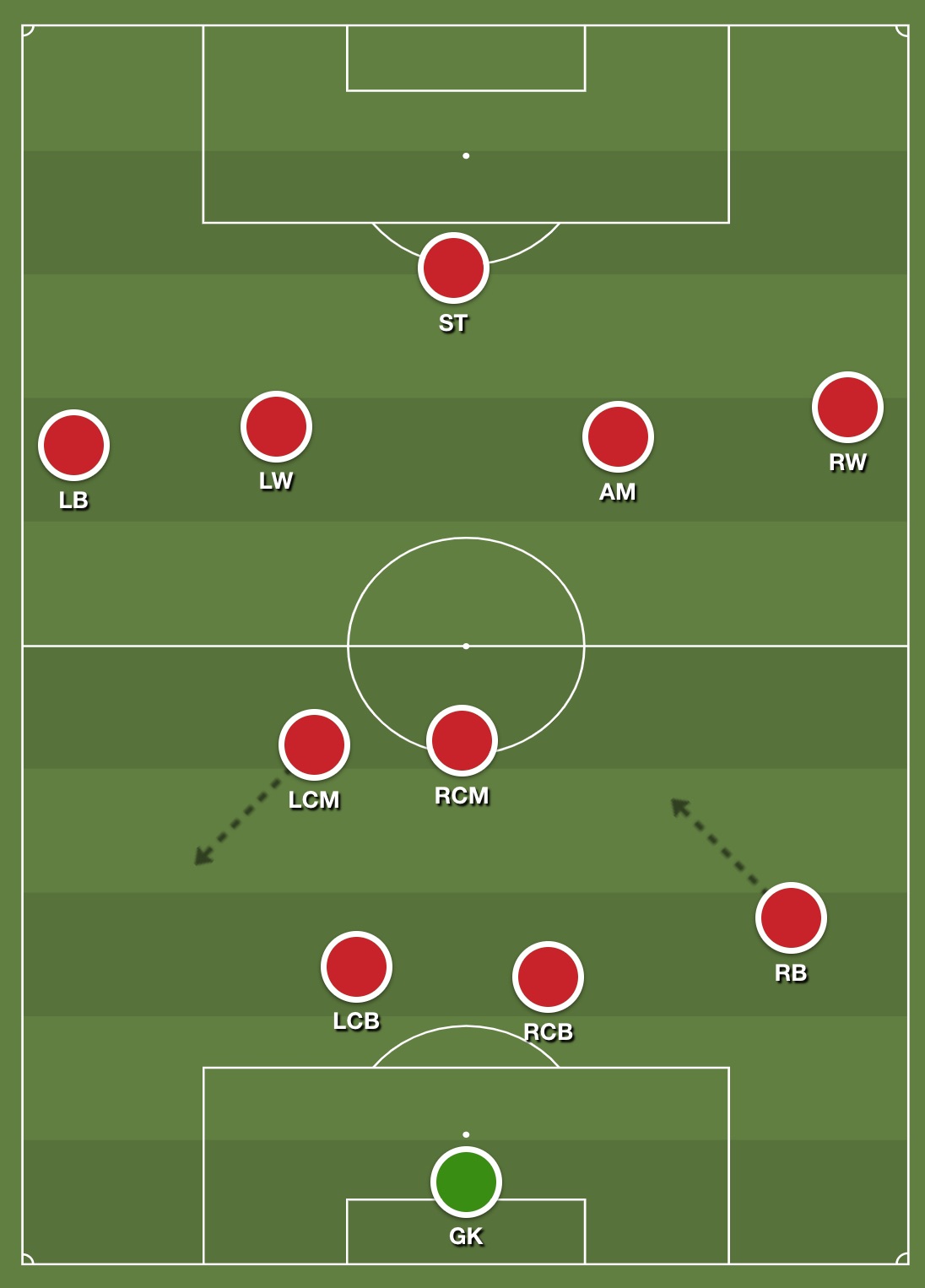 It was predictable. All Arsenal fans knew the right-back wouldn’t overlap but that the left-back would, and the Granit Xhaka (usually) would then drop in on the left. If we could all see that, then obviously everyone else could too. The system made sense, it allowed Tierney to maraud down the right and protected Xhaka, who tends to be better with the game ahead of him but exposed when alone in midfield. It also served as a way to get Pierre-Emerick Aubameyang and Alexandre Lacazette both into a team that lacked goals.

And sometimes it worked. But it was so rigid, that it was never likely to lead to reliable, long-term success. Not once teams figured Arsenal out and not with players penned into roles that didn’t allow for freedom.

Way back in December 2020, Arteta insisted a back five wasn’t his long-term plan and suggested he didn’t believe the personnel at his disposal were capable of playing in a 4-3-3 the way he wanted.

“We want to move to a 4-3-3 but for that, you need a lot of specificity in every position but now in five or six positions, we don’t have it.”

With Bukayo Saka moved further forward and Emile Smith Rowe brought into the team, Arteta permanently departed from the back five that helped him win the FA Cup. But the back four system stayed the same as it ever was. It was more effective — Arsenal improved at the back end of last season, clearing an exceptionally low bar — but wins weren’t overly convincing. Arsenal won games but didn’t seem to dominate them, with a lot of defending being done in their own half and few chances being created.

That has changed lately. Per Statsbomb, Arsenal completed over 50 pressures in the final third in just four of their first 58 Premier League matches under Arteta before this season.

They then completed over 50 final third pressures in three of the opening 17 Premier League games of 2021/22. Since then, Arteta’s Arsenal have completed over 50 final third pressures in five of their last seven league matches. Arsenal are pressing higher and with more intensity, boxing teams in their own half, forcing them to play long, and regaining possession quickly to start attacks again.

Playing with the ball and playing without it are linked, but I want to focus more on how Arsenal suddenly look different in possession. Arteta has more of the specificity he wants in the squad now, thanks to the summer arrivals of Aaron Ramsdale, Ben White and Takehiro Tomiyasu, but Arsenal have only really started to change their approach in possession in recent weeks.

Starting on the left, and focusing on games against Brentford and Wolves, Kieran Tierney has taken up a much more orthodox left-back position than before, with Granit Xhaka no longer permanently covering the Scot’s marauding runs. Tierney no longer acts exclusively like a winger when Arsenal are in possession.

That change has allowed Granit Xhaka and the left-winger — Emile Smith Rowe against Brentford, Gabriel Martinelli against Wolves — to vary their own movements more.

Xhaka and Tierney, basically, now often look like they’re now in the wrong sections of the team. Tierney stays back, Xhaka advances centrally, and the winger remains wide. It has become common to see Xhaka not involved in the first phase of build up at all, leaving that to Tierney, Thomas Partey, and the centre-backs while he occupies players further upfield.

In the past, you would have almost always expected him to be to Gabriel’s left in this scene. 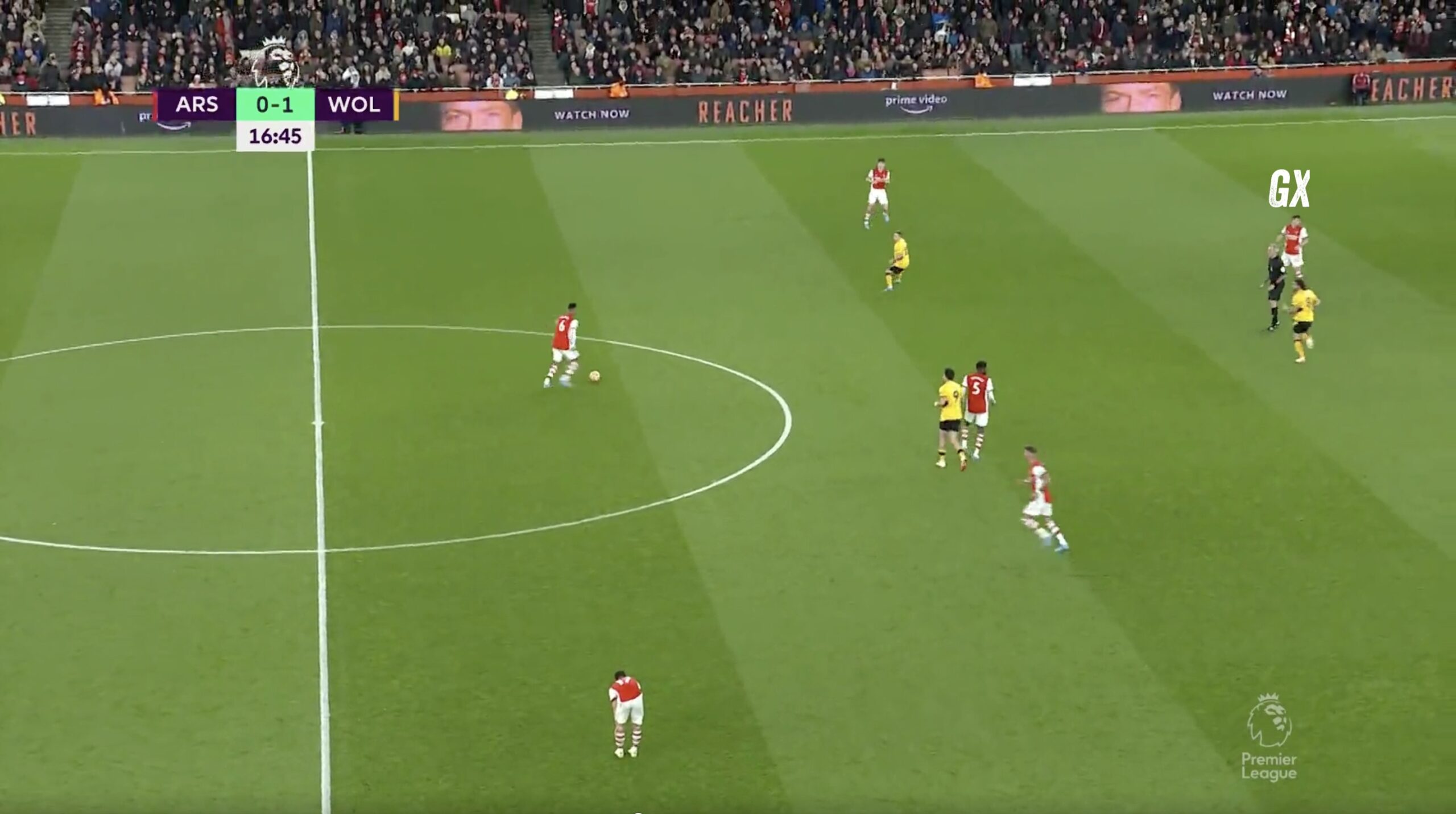 Or to Partey’s left, where Tierney is, in this one. 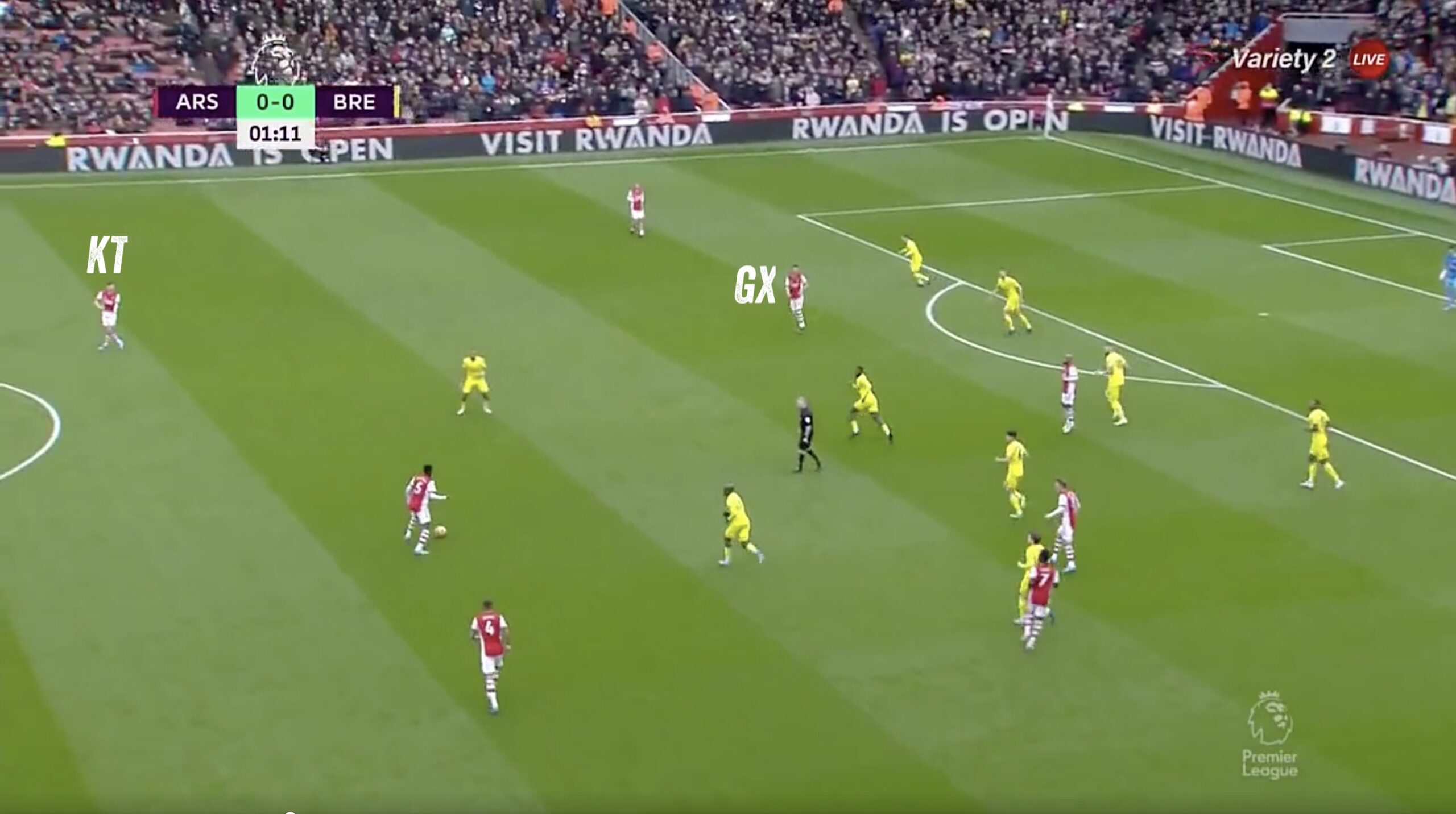 But instead he’s much less involved in those areas, occupying opposition defenders instead. In this instance he drags Tierney’s marker away, giving the Scot time and space to carry the ball to the halfway line unopposed. 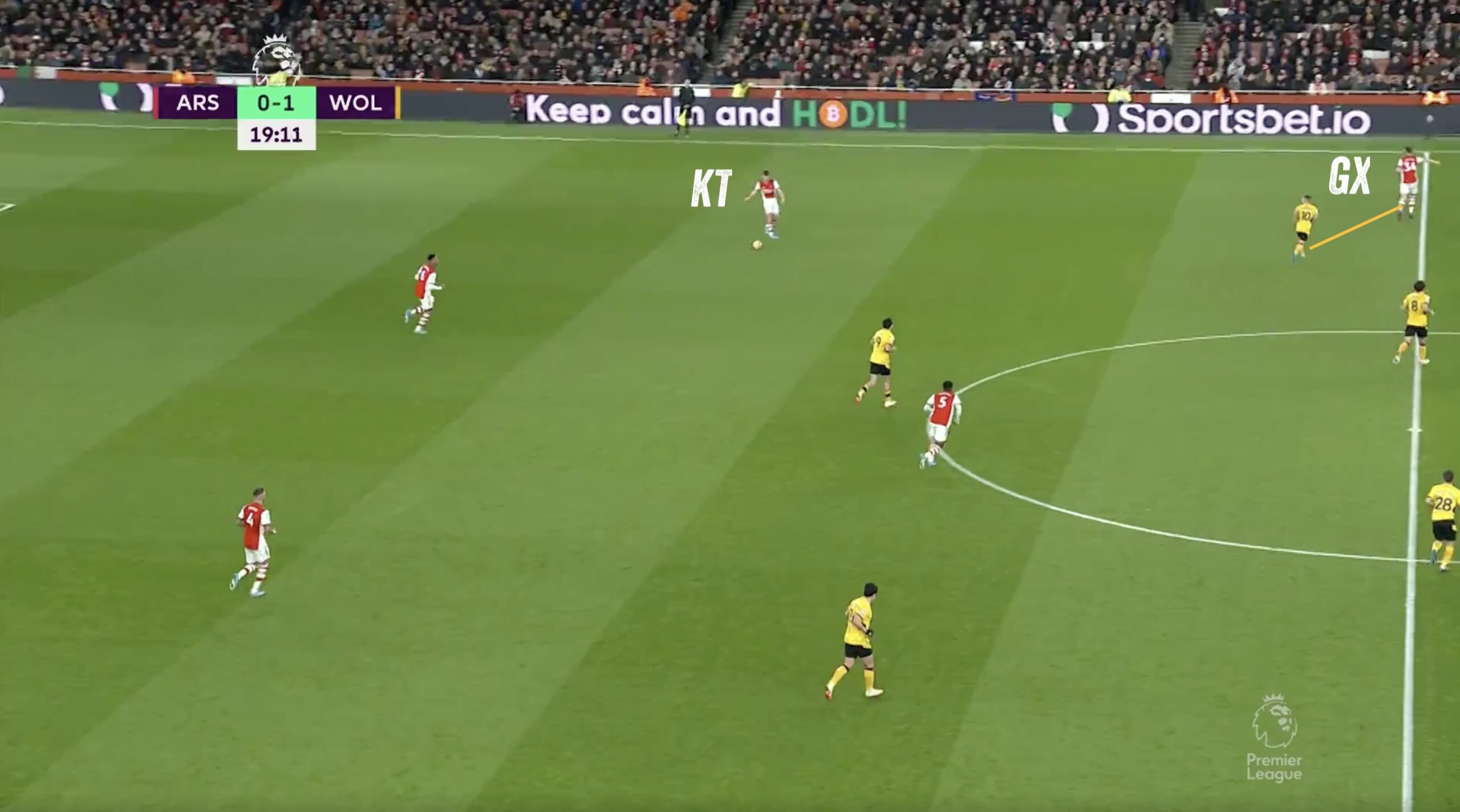 There are a few things the new positioning provides. Firstly, it’s a little more complicated to press Arsenal if Wolves can’t simply go man-to-man because the movements are less predictable. Daniel Podence follows Xhaka in the above example but ordinarily, on the right of the Wolves front three, he would be there to press Xhaka in the position Tierney is in. Xhaka tucking into that shape allowed teams to push Arsenal back but this does the opposite, with Arsenal rotating in a less obvious way and using it to stretch teams.

Another factor is that Smith Rowe or Martinelli get the chance to take on their opposite number one-on-one on the flank, more like Saka does on the right, without Tierney overlapping and bringing another defender with him. This shape originally had Aubameyang on the left and was designed to release him inside — the Gabonese wasn’t the best at keeping the ball close and taking players on — but the need for that isn’t so strong with the options Arsenal have in the shape now.

One other thing is it makes Arsenal even more secure on the break.

A clip of Ben White losing the ball and then tripping Raul Jimenez proved popular last week but look away from White in the same situation and you see Tierney in what had become Xhaka’s usual position. 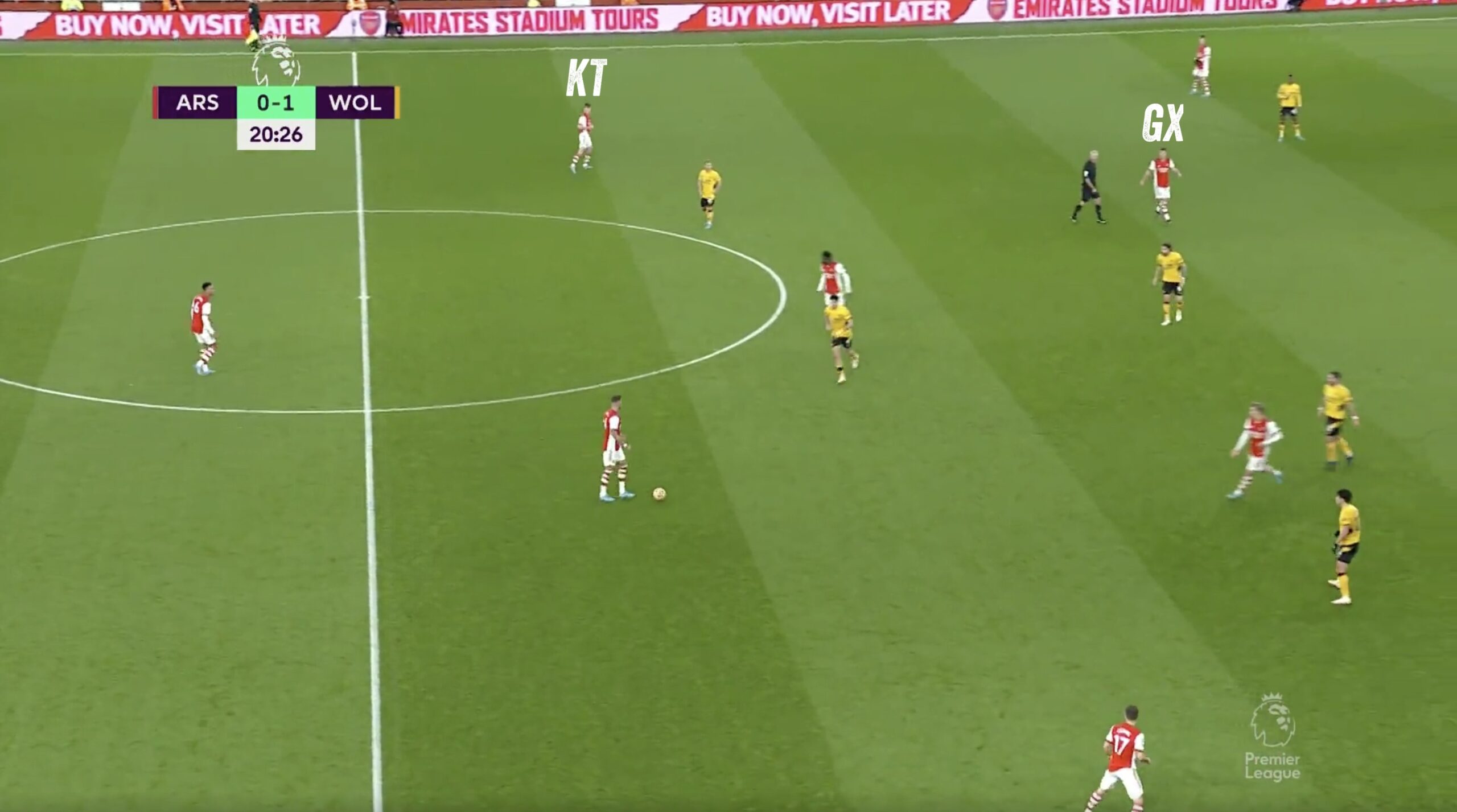 When the ball is lost, that means Tierney — not Xhaka — is the covering defender. The left-back has great acceleration and defensive instincts, having him all the way on the wing (where Gabriel Martinelli is below) is a complete waste when Arsenal need to recover from a loose pass. Having him closer to, or a part of, the backline is much more sensible and it means Xhaka, notoriously slow to get off the mark, isn’t in a vulnerable position. 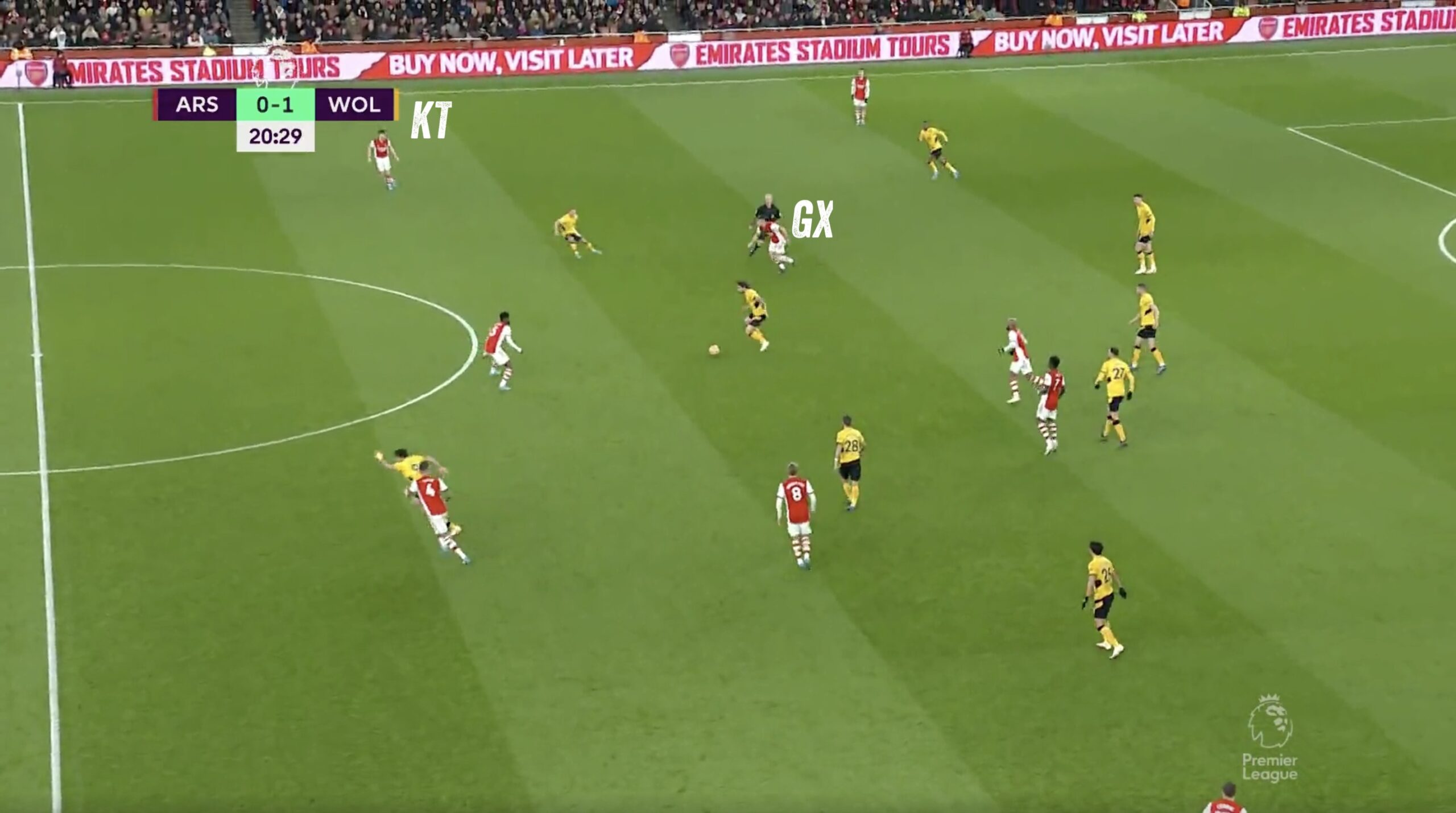 In that instance Arsenal won the ball quickly and you could see another benefit: Xhaka could turn and look for Martinelli. Usually, in the previous way of attacking, the reclamation of possession would’ve seen Martinelli trying to thread a ball through for Tierney. There’s nothing wrong with that but everyone would rather have Martinelli or Smith Rowe released in the final third than the left-back.

This new approach may be consistent but it’s by no means rigid, and that’s the difference to before. Tierney still gets forward. When he does, Cedric Soares at right-back has taken his turn to be more conservative.

When Smith Rowe scored the opener against Brentford, after Tierney had flown outside him, Xhaka and Cedric were very much in the ‘old’ positions you’d have expected from them in Arteta’s Arsenal. The difference was that they weren’t fixed there throughout the game. Protecting territory remains the key — Arsenal outnumbered Brentford five to four if Smith Rowe lost possession and the ball broke loose — but Arsenal are finding different ways of creating the same shapes. And that’s why this new approach won’t see the team hamstrung by having putting too much attacking reliance on Xhaka or not enough on Tierney. The left-back has still gotten forward too, even as Xhaka has provided an option in the penalty area, with the two always wary to cover one another. 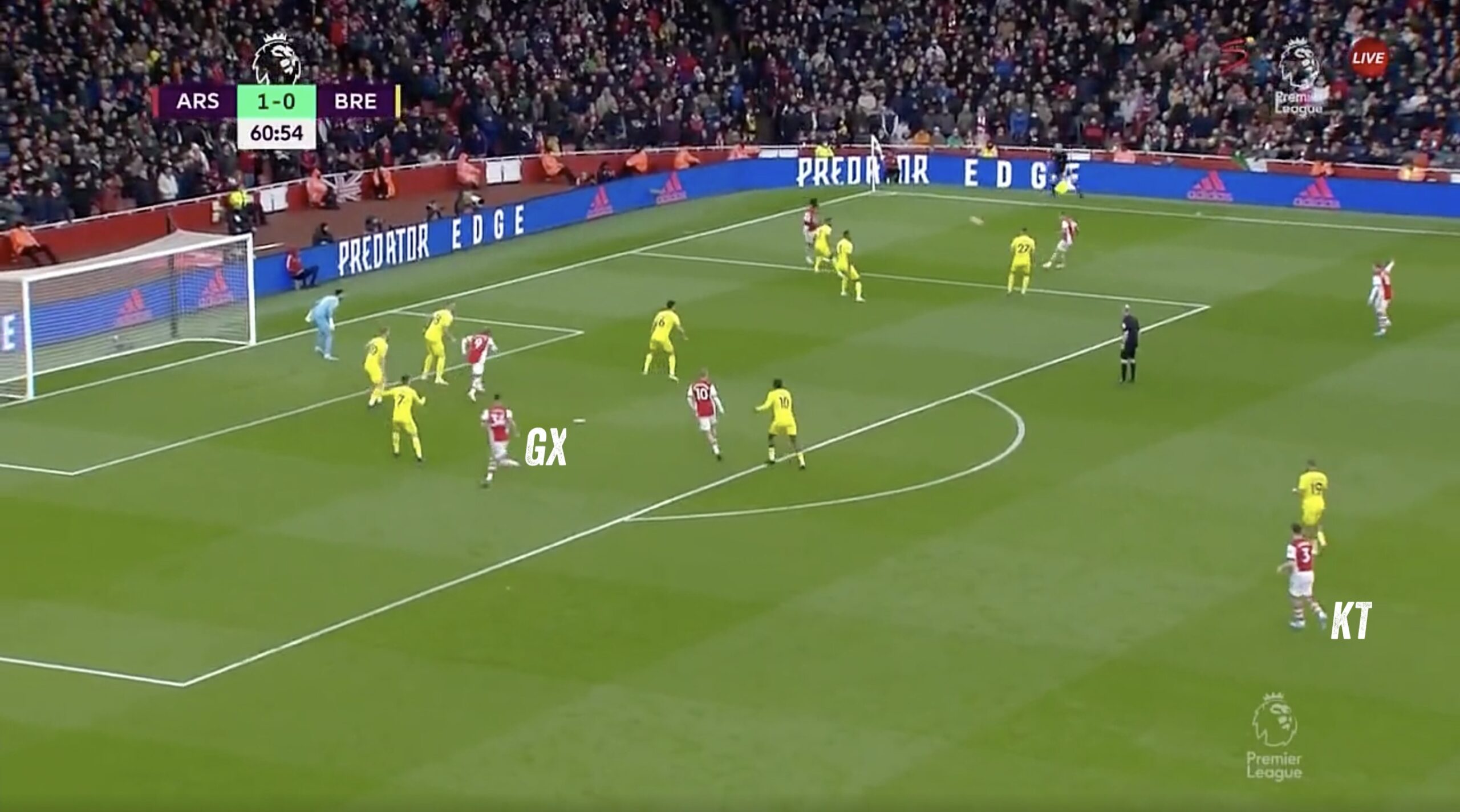 … so then Xhaka sits as Tierney drives on in possession. Xhaka has shown the intelligence a few times to sit in, with Tierney still getting involved upfield and perhaps looking even more threatening as he can arrive late, rather than standing high and wide as he waits for possession to reach him. 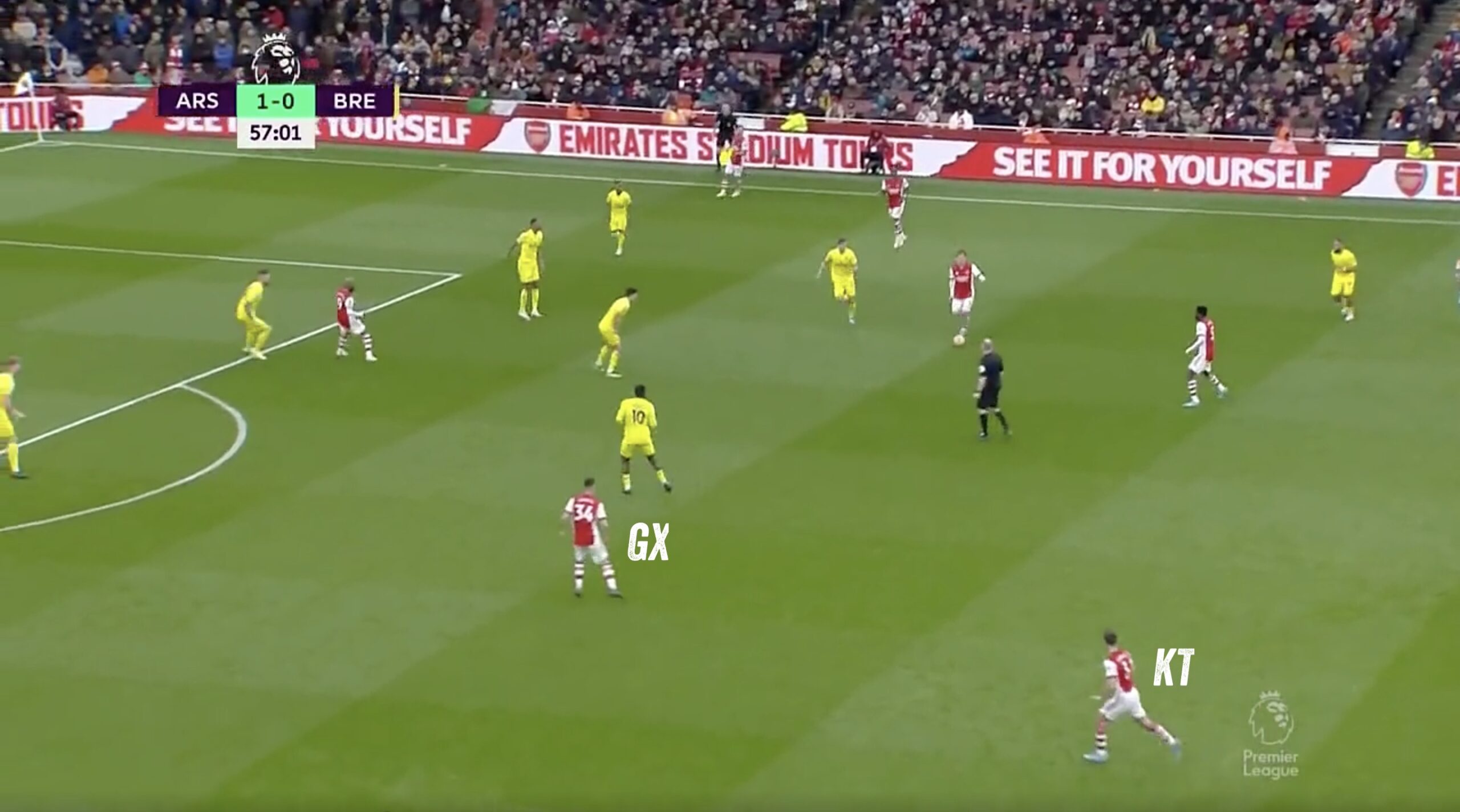 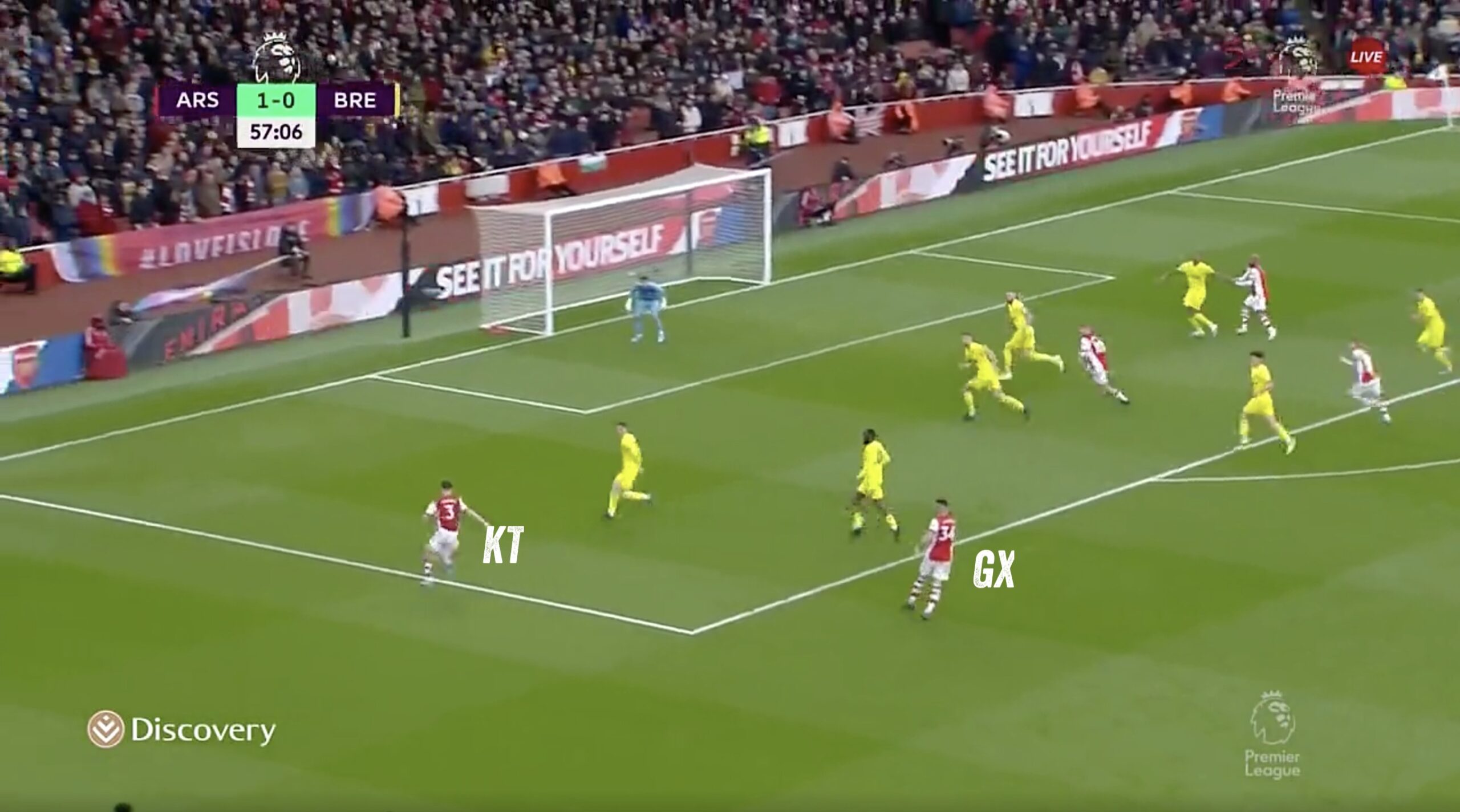 Tierney is still receiving the ball high up the pitch in these games, he’s just also receiving it closer to his own goal as well. 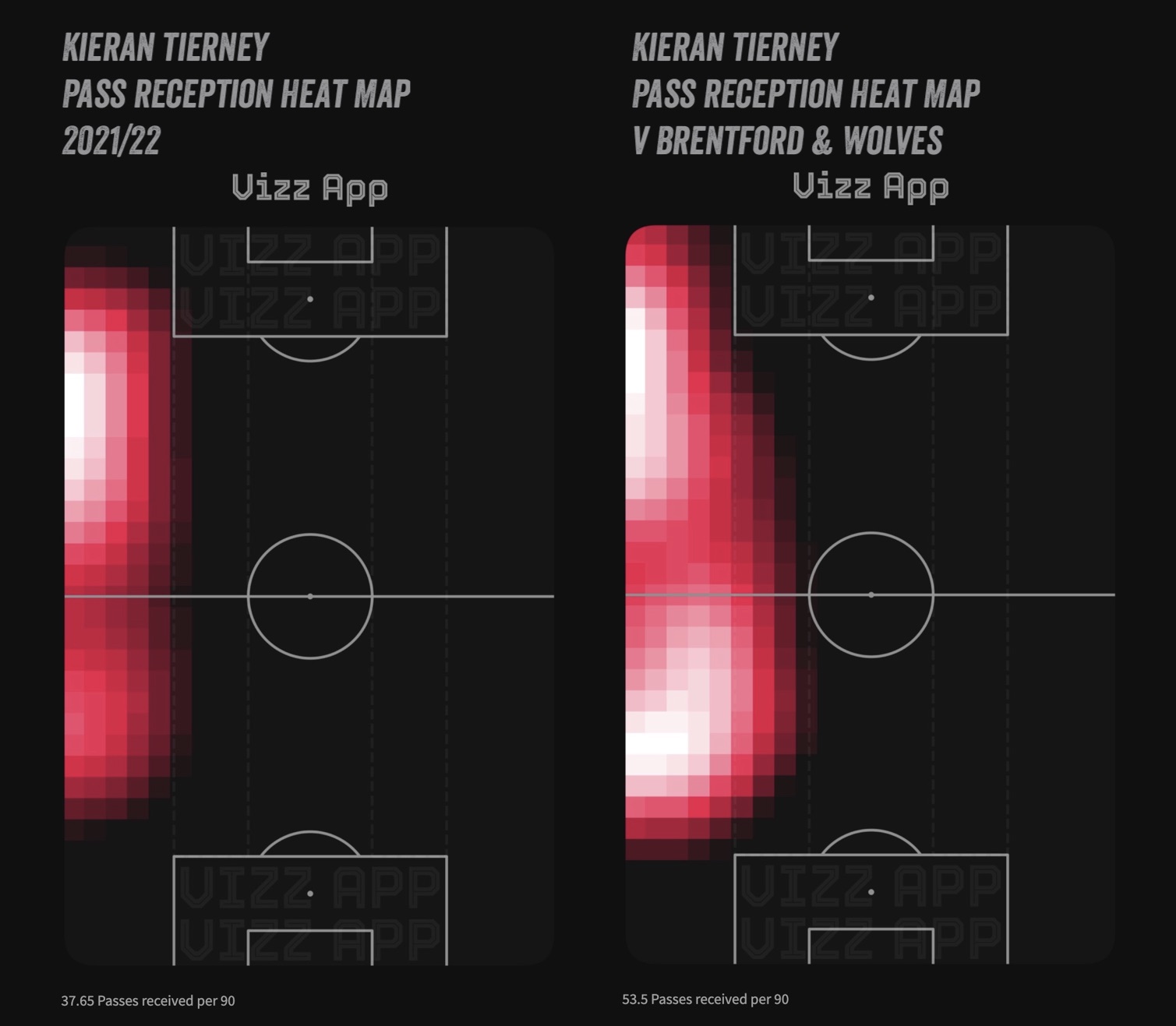 At times in the last few games Tierney has gotten forward centrally too, adding to the variation and rotations. In this instance he has occupied a defender so his winger can receive the ball in space on the touchline without being pressed instantly or outnumbered. In these cases, Smith Rowe has been harder to mark and Xhaka has provided the cover. 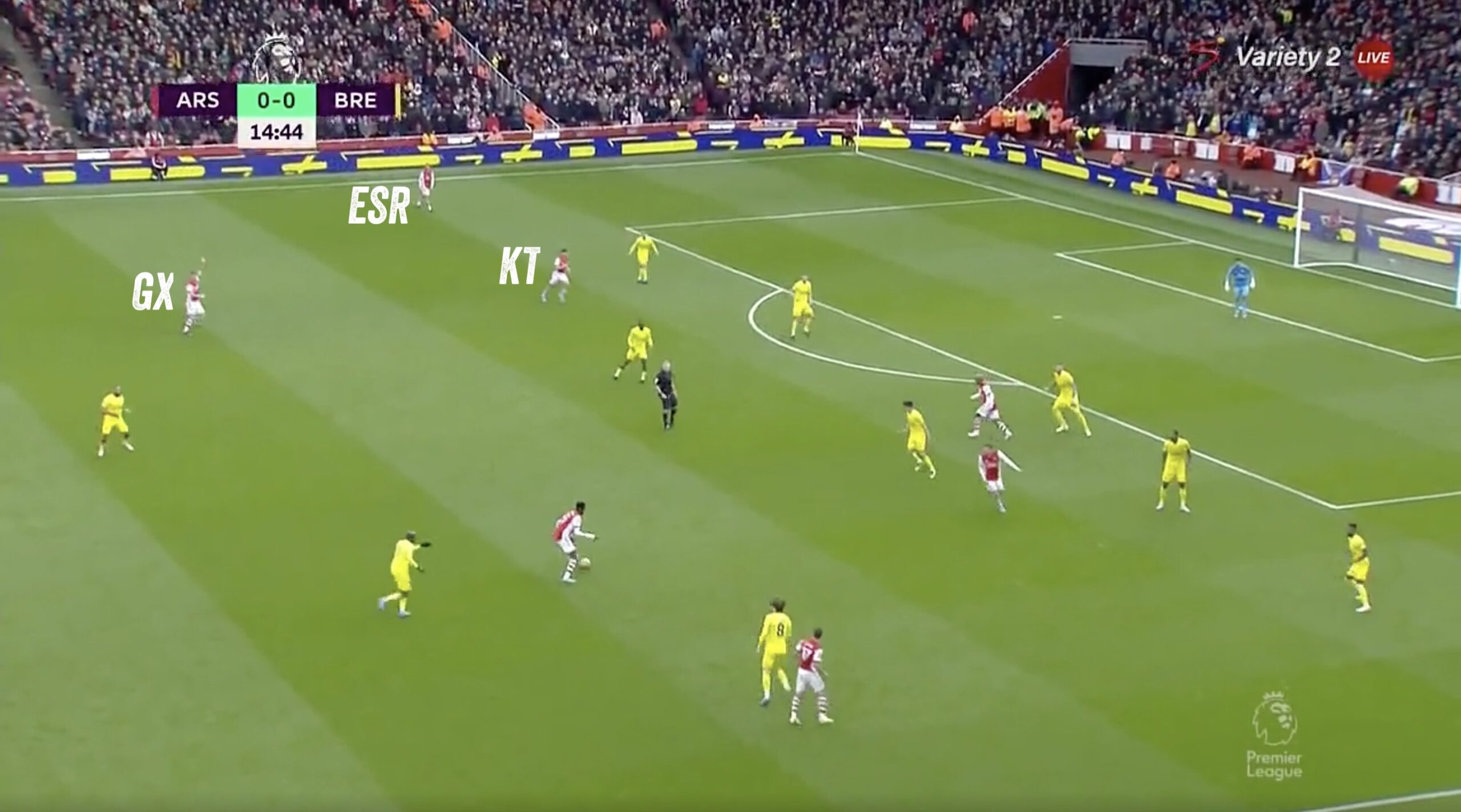 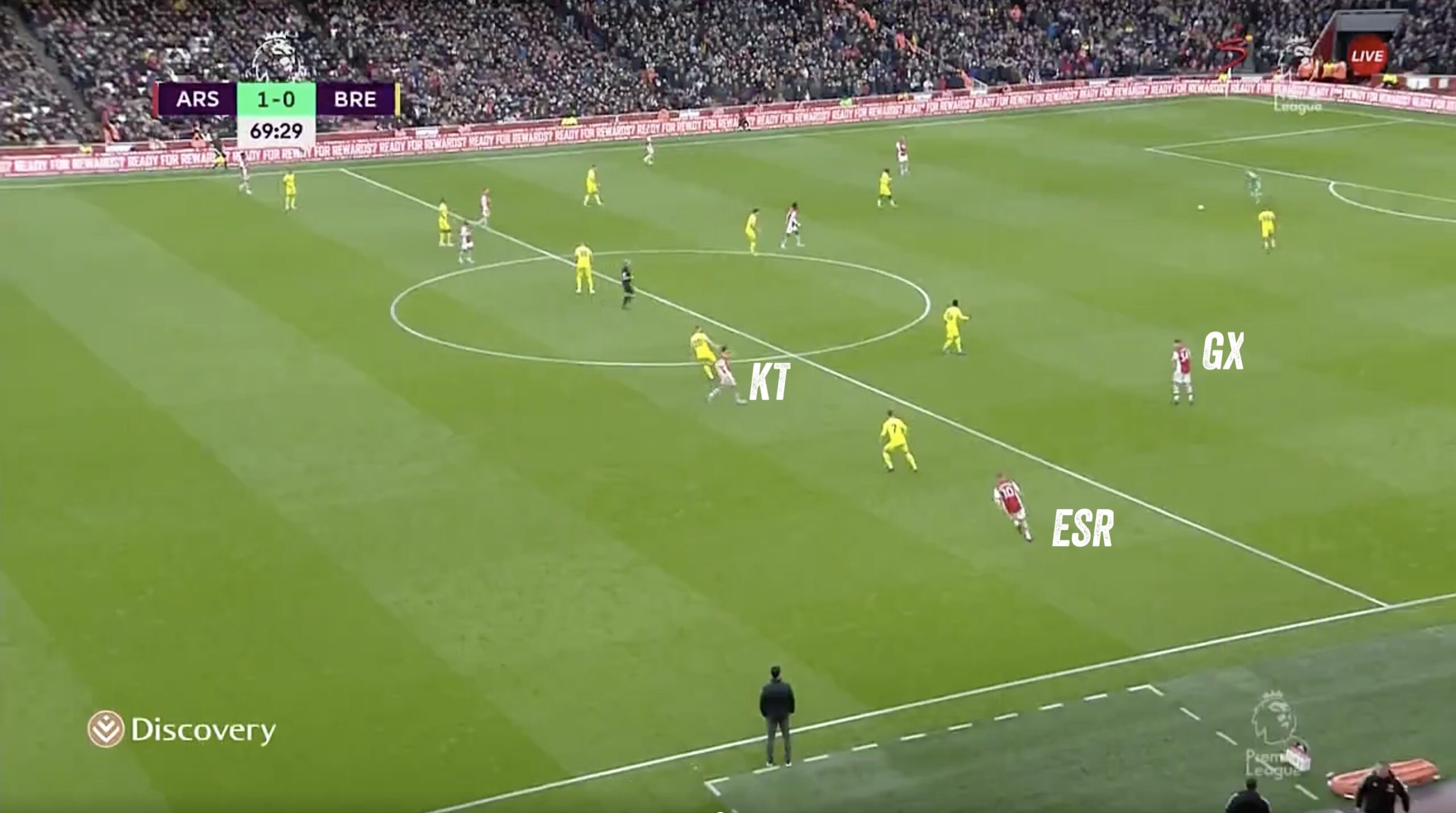 The shape remains the same as it ever did: someone holds the width, someone plays inside the winger, and the third player on that side tucks inside the left-back position to provide cover. 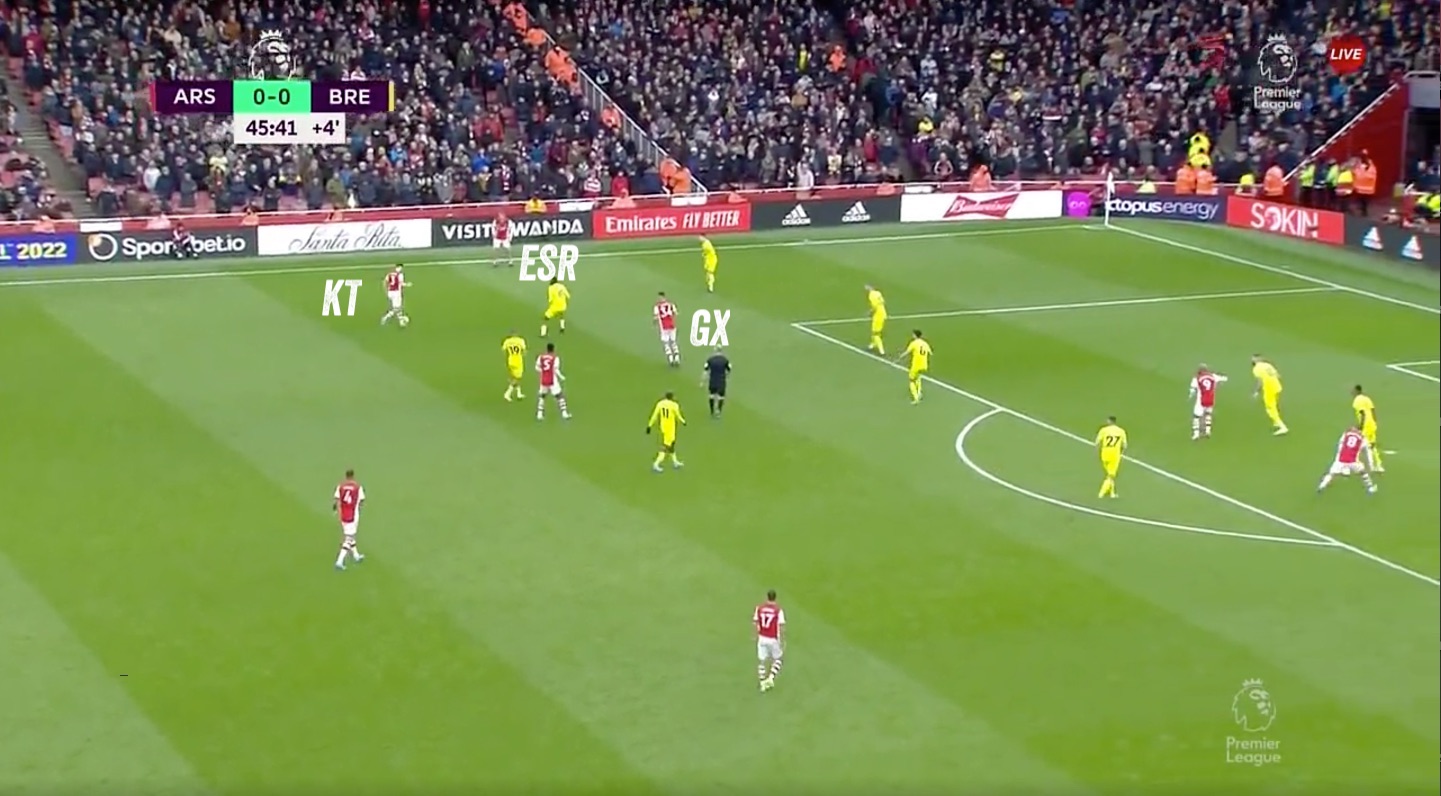 And you can see the space it creates for the man on the touchline when the nominal wide man’s out-to-in movement is that bit less predictable. 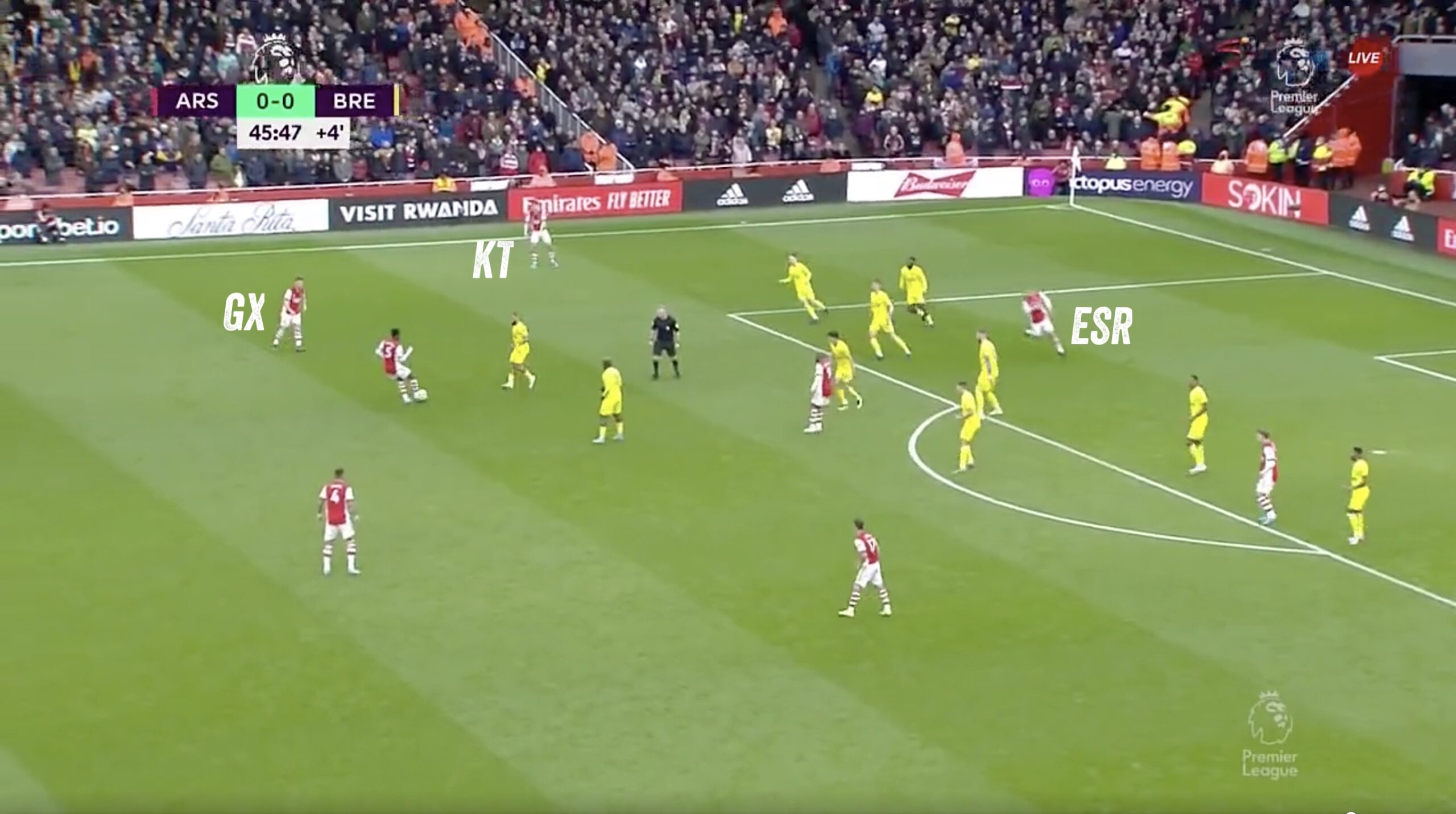 And that’s just the left-hand side, Arsenal have changed on the right as well, with Martin Odegaard and Bukayo Saka now truly in sync and enjoying the freedom of having Cedric behind them.

Whether or not that continues when Takehiro Tomiyasu returns remains to be seen but I’ve already got some thoughts on the evolving Odegaard-Saka relationship for next time.

Ultimately, especially down the left flank, Arsenal are doing all the same things they’ve been doing for a while now. They’re just doing them differently and it looks like it is working very well indeed.