Tactics Column: How to lead the line with Eddie Nketiah

Eddie Nketiah had more touches (46) than Alexandre Lacazette has recorded in any Premier League appearance so far this season. And he used them. Nketiah carried the ball 346 yards over the course of the game, almost double Lacazette’s high in a single game this season (181), he had four shots on target (Lacazette has not had more than two in a game this season) and made 10 ball recoveries, higher than Lacazette’s season-high of seven. And Nketiah’s 25 completed passes has been bettered by the Frenchman just twice (27 against Leeds and Norwich) in 20 Premier League starts.

He may not have been rewarded with a goal but this was a pretty complete performance from the Arsenal striker and the sort of display that will make fans dream of huge possibilities when a new number nine has the chance to lead the line for this team next season.

Throughout the first half, Nketiah’s influence saw him do the sorts of things Lacazette has been praised for in the past, linking play through the heart of the pitch as Martin Odegaard dropped out to the right touchline, dragging Declan Rice with him. The gap between Rice and Mark Noble was constantly exploited by Nketiah, who left the frontline to offer an option as Arsenal played out from the back and looked for passes through the lines. 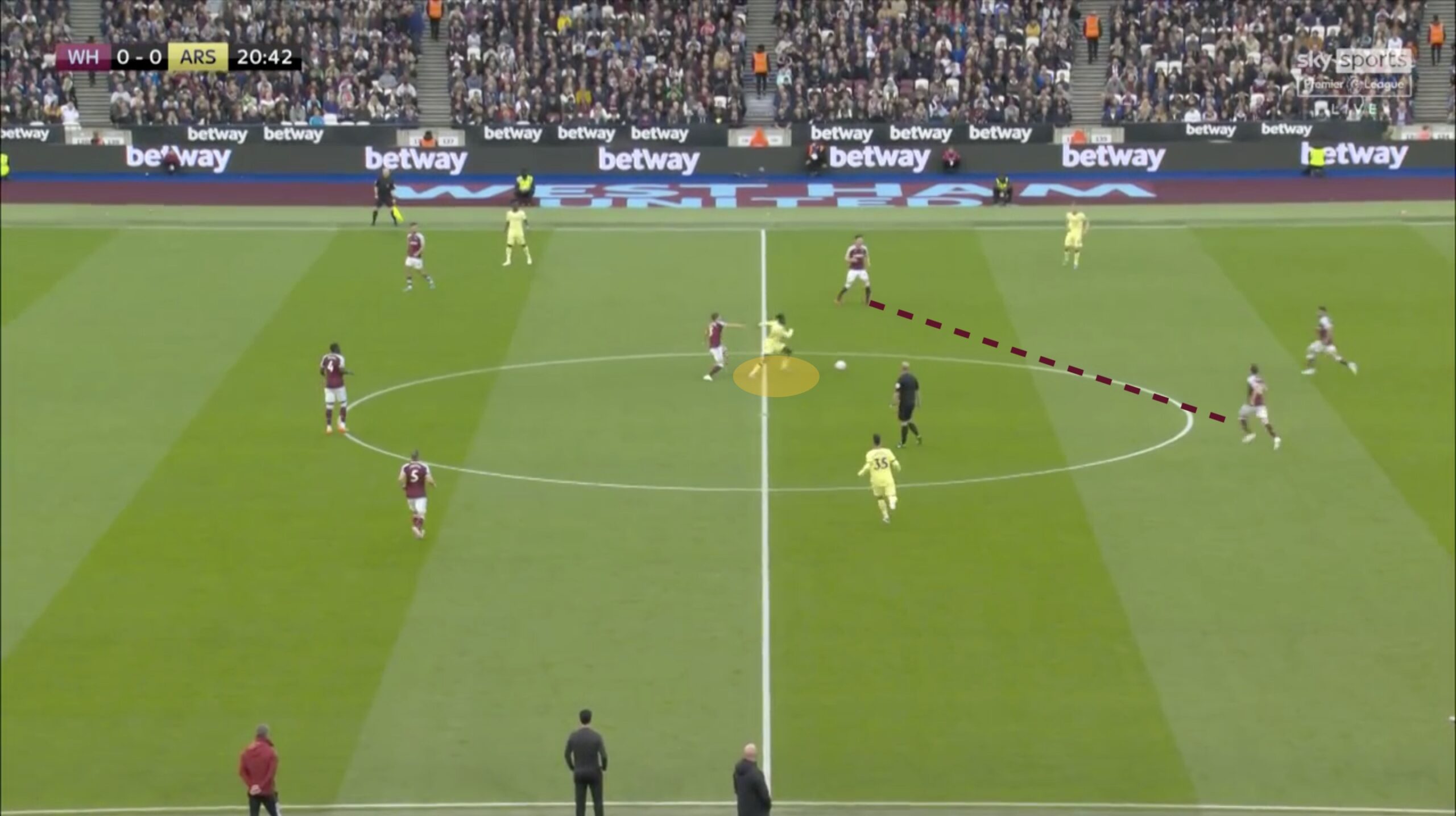 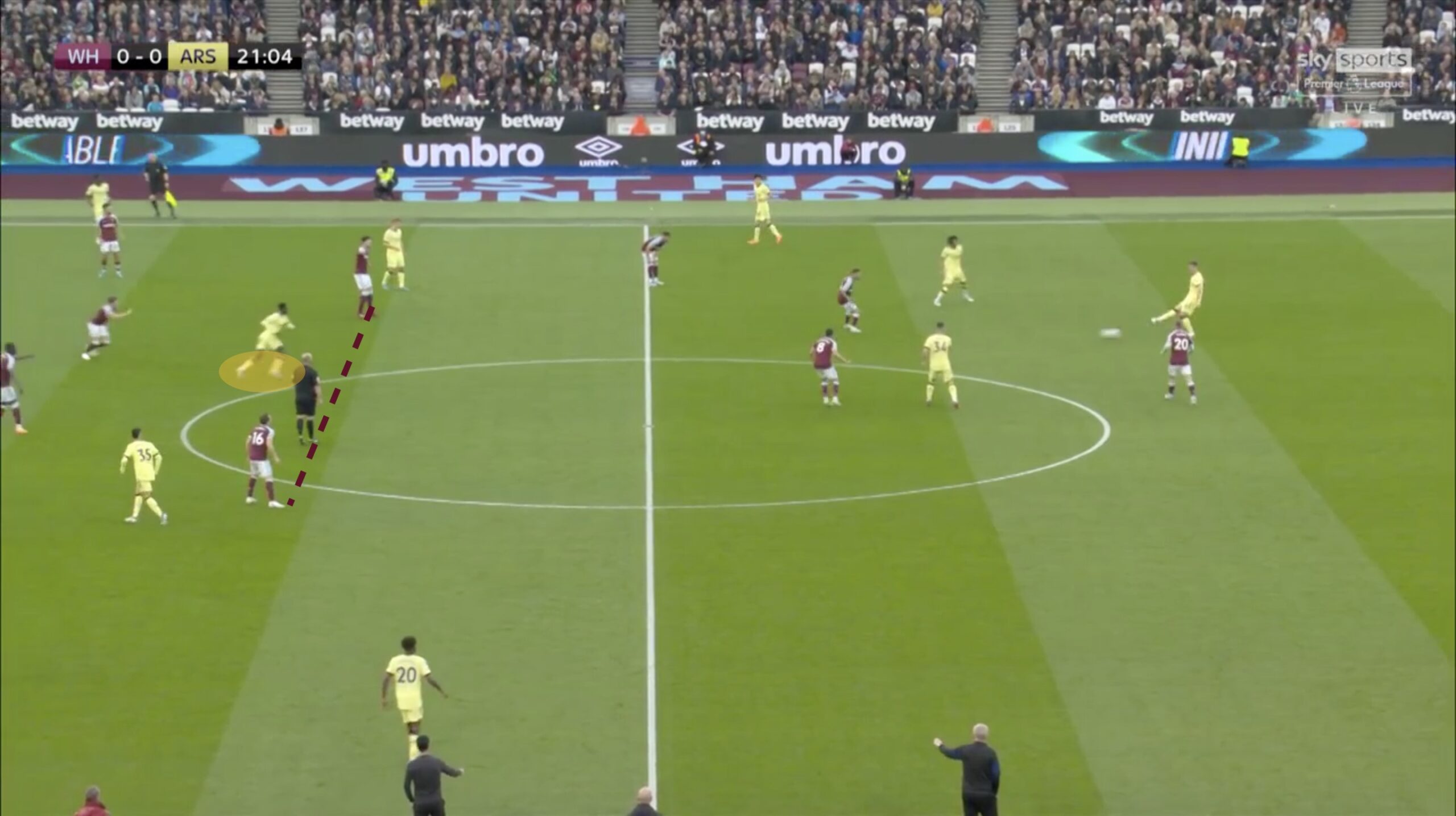 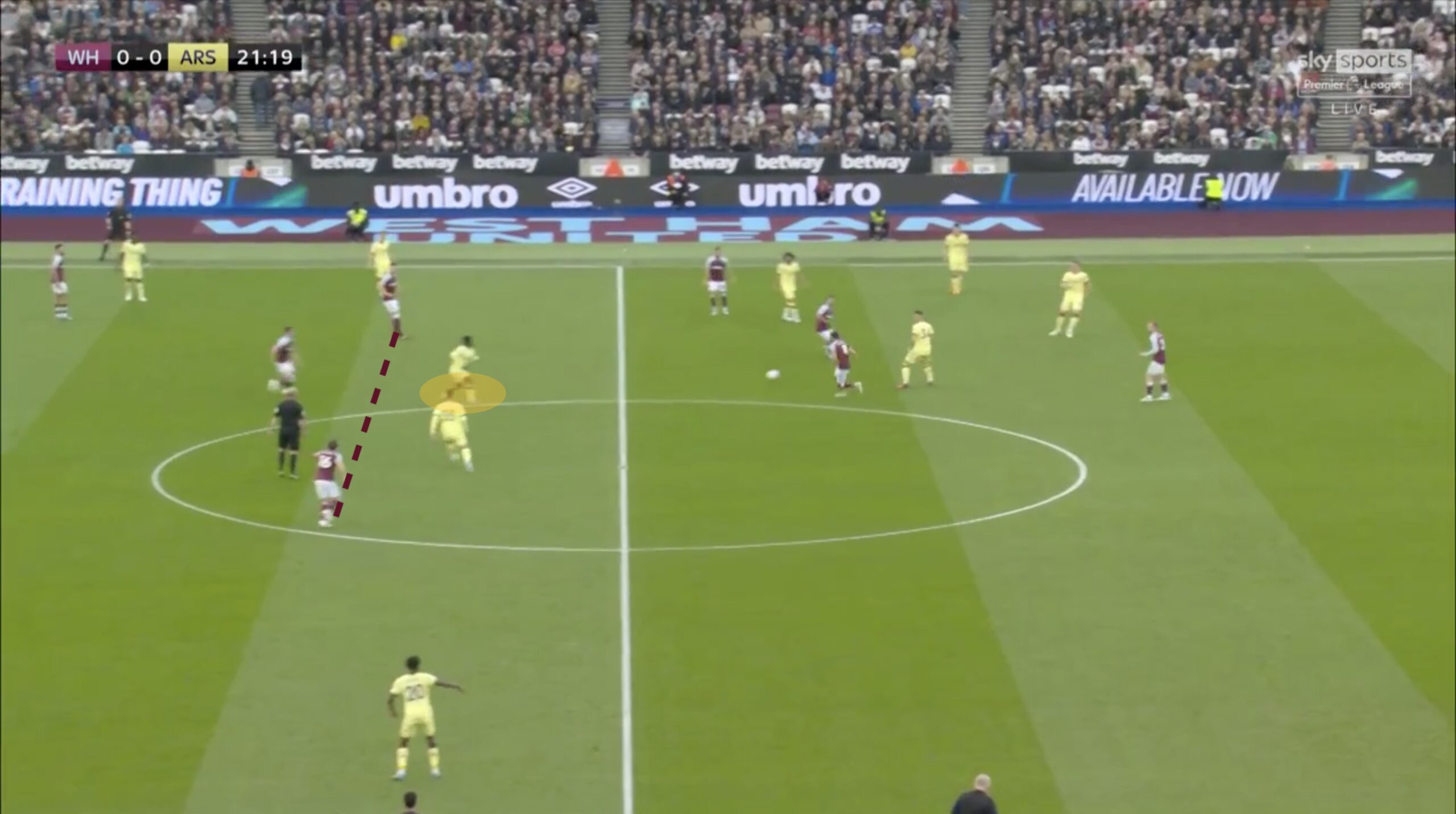 And the Arsenal striker consistently dropped into that gap between the West Ham midfielders as they became visibly frustrated, not knowing whose responsibility it was to pick him up. 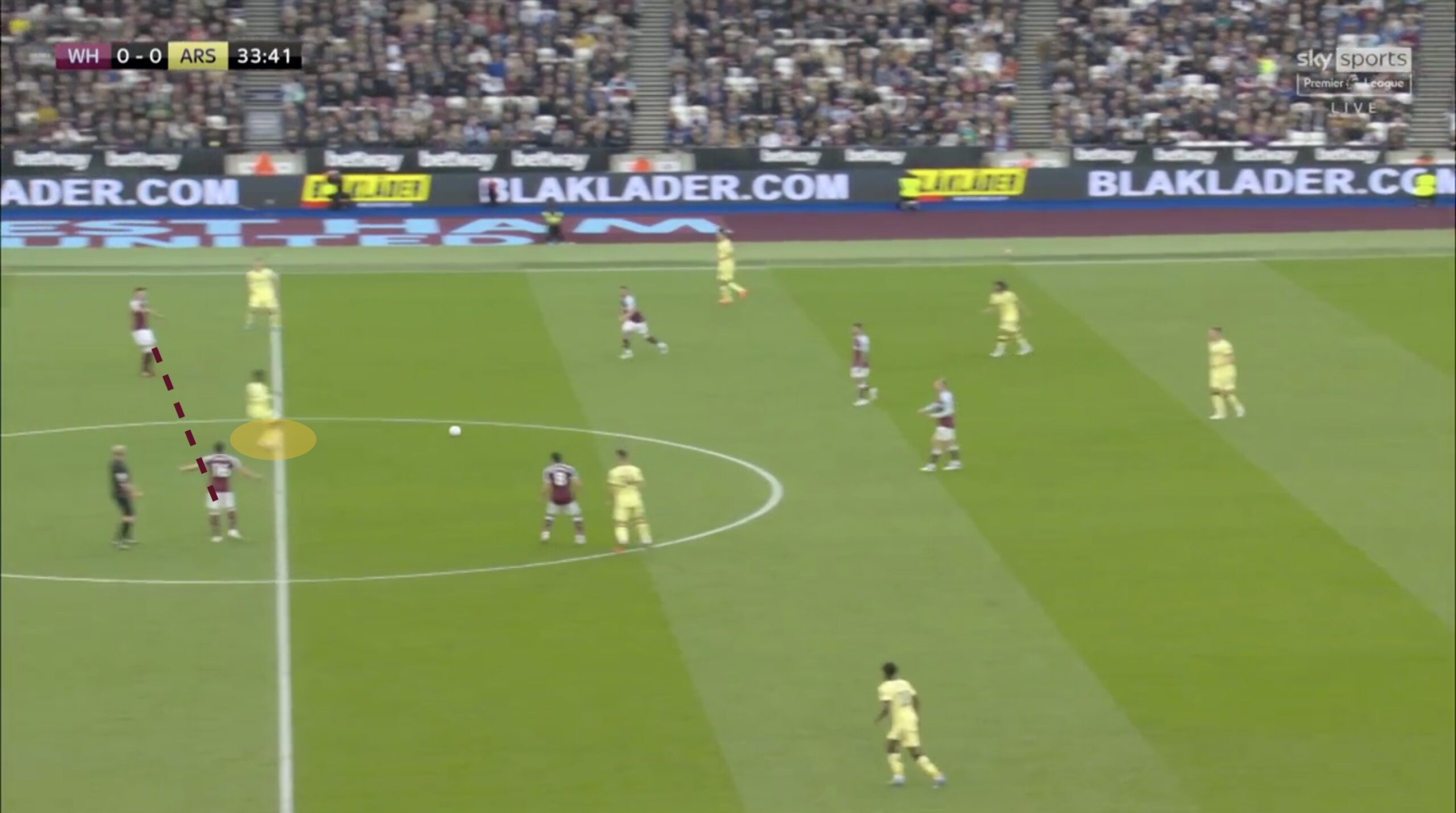 Ultimately, right before half-time, Cresswell steamed in and fouled Nketiah from behind as another pass was played through the lines into his feet and West Ham’s lack of a solution saw them grow increasingly frustrated. 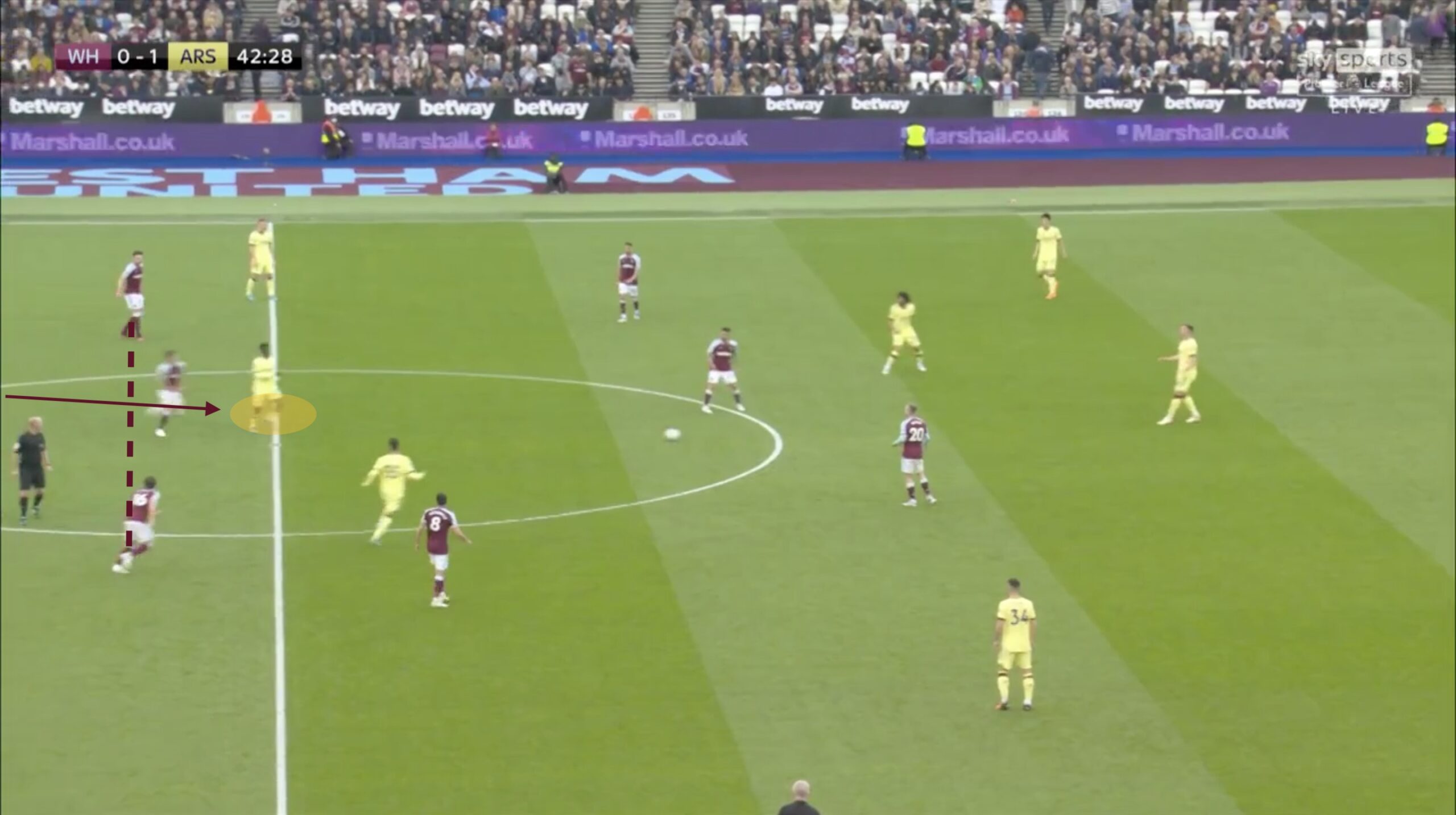 Nketiah did nothing special with his back to goal in these situations, usually laying the ball off to a team-mate, but it helped Arsenal get upfield repeatedly. And the same can be said as the game went on and the ball was played longer. Nketiah may not be the most physically imposing but he worked excellently to give Arsenal a release valve, competing for and winning the ball from a couple of goalkicks.

Nketiah isn’t the biggest but he has improved when it comes to using his body, sticking his backside out and backing into more physical players to win those long balls forward. 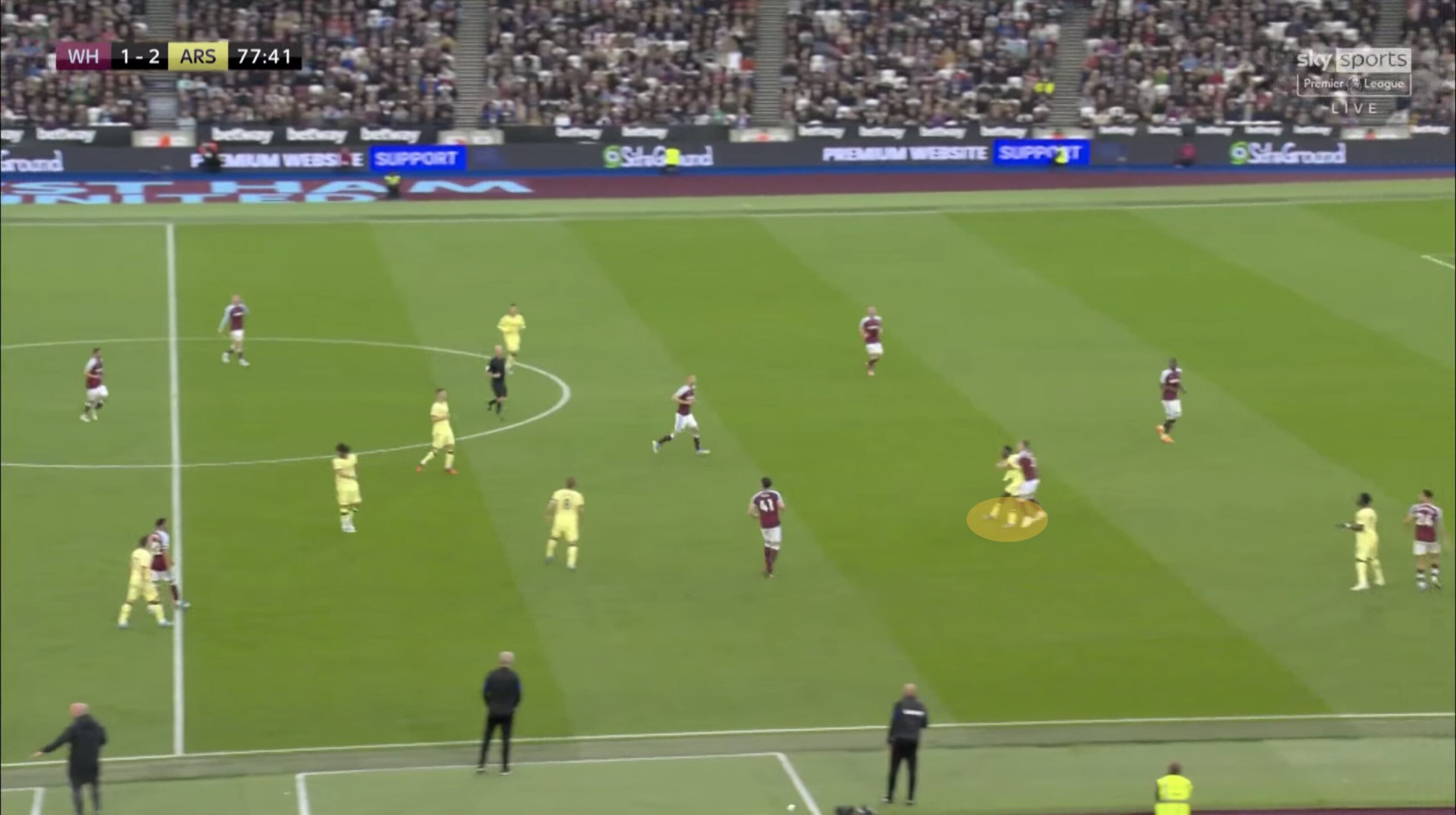 Either unsettling Cresswell before winning the ball after it bounces … 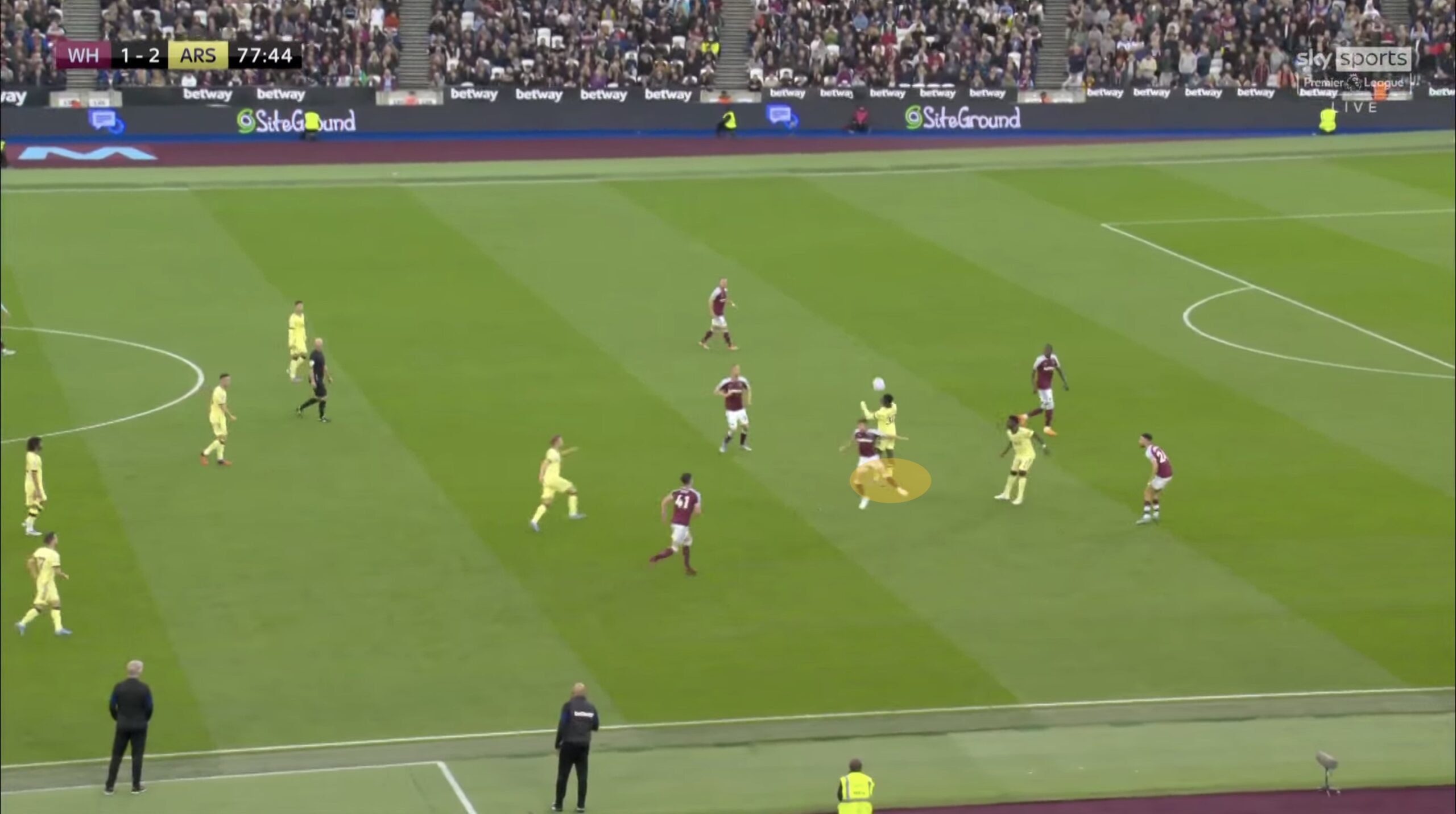 …or holding off Tomas Soucek to win the ball in the air. 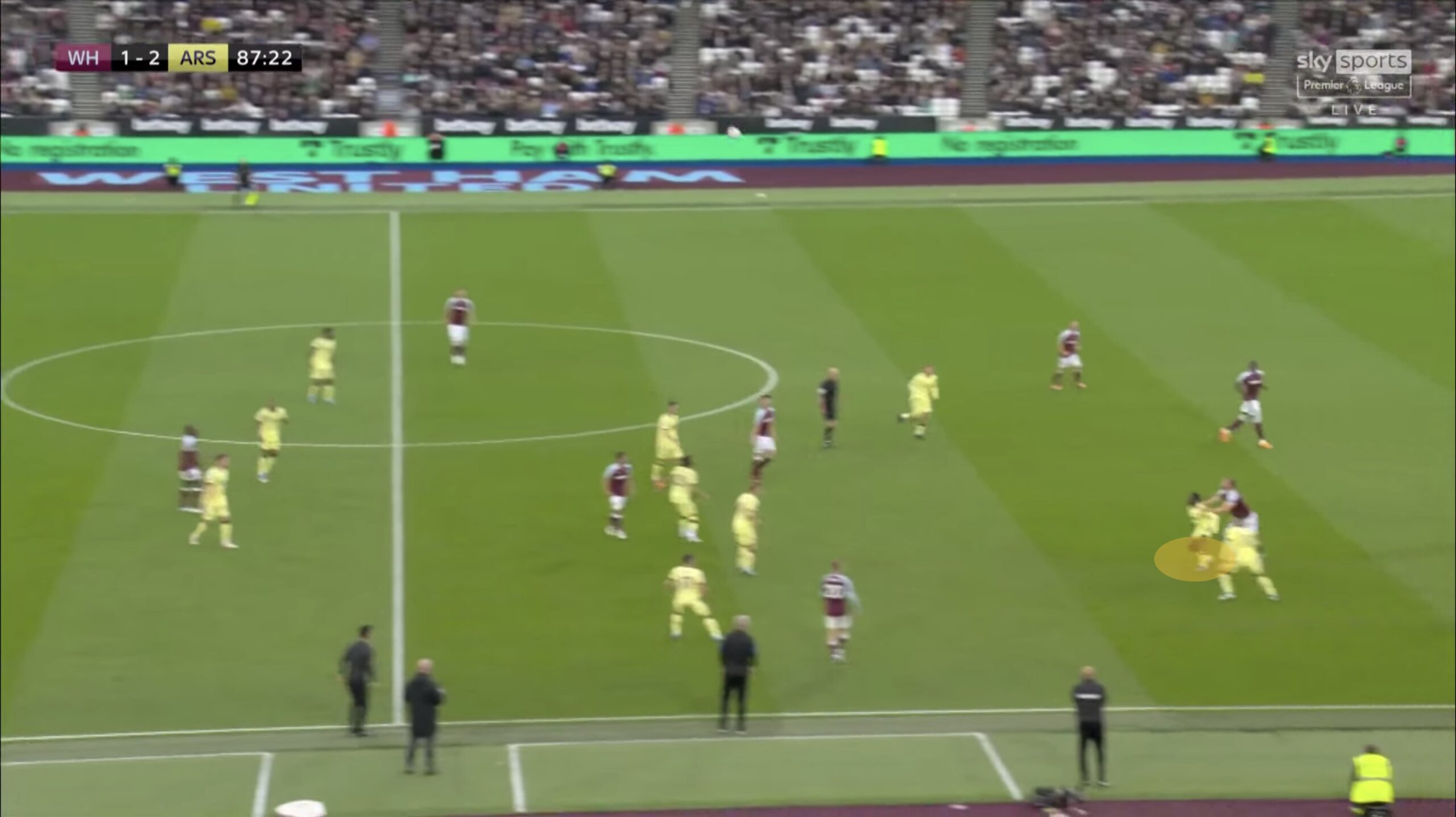 On top of all of those less-expected things he added to the side, Nketiah also continued to spring into life, as you’d expect, whenever there was a chance to run at the backline to earn a shot at goal.

His first strike came as he offered an option short again, dragging Cresswell out of defence, before spinning and using the space opened up by Bukayo Saka’s run inside. 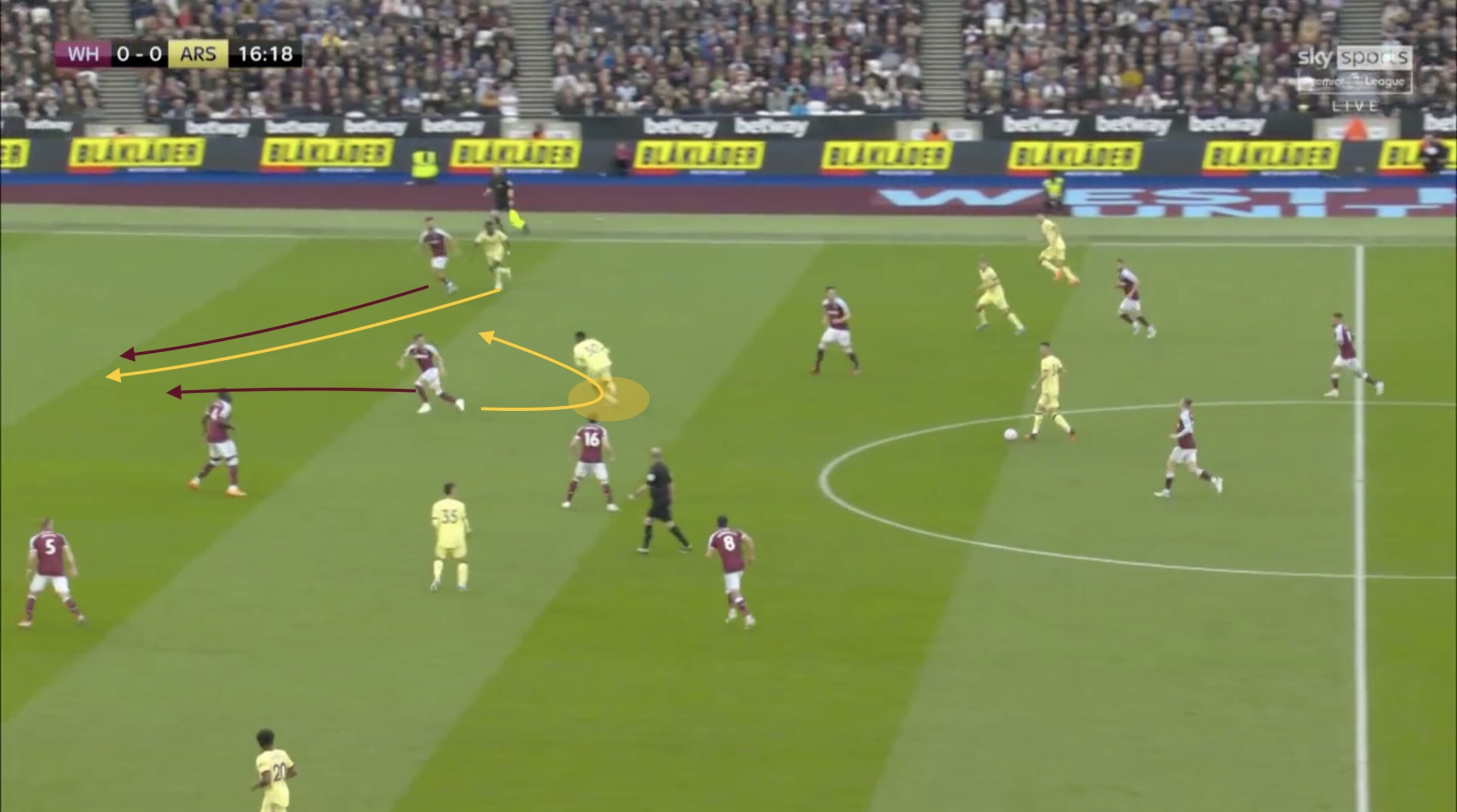 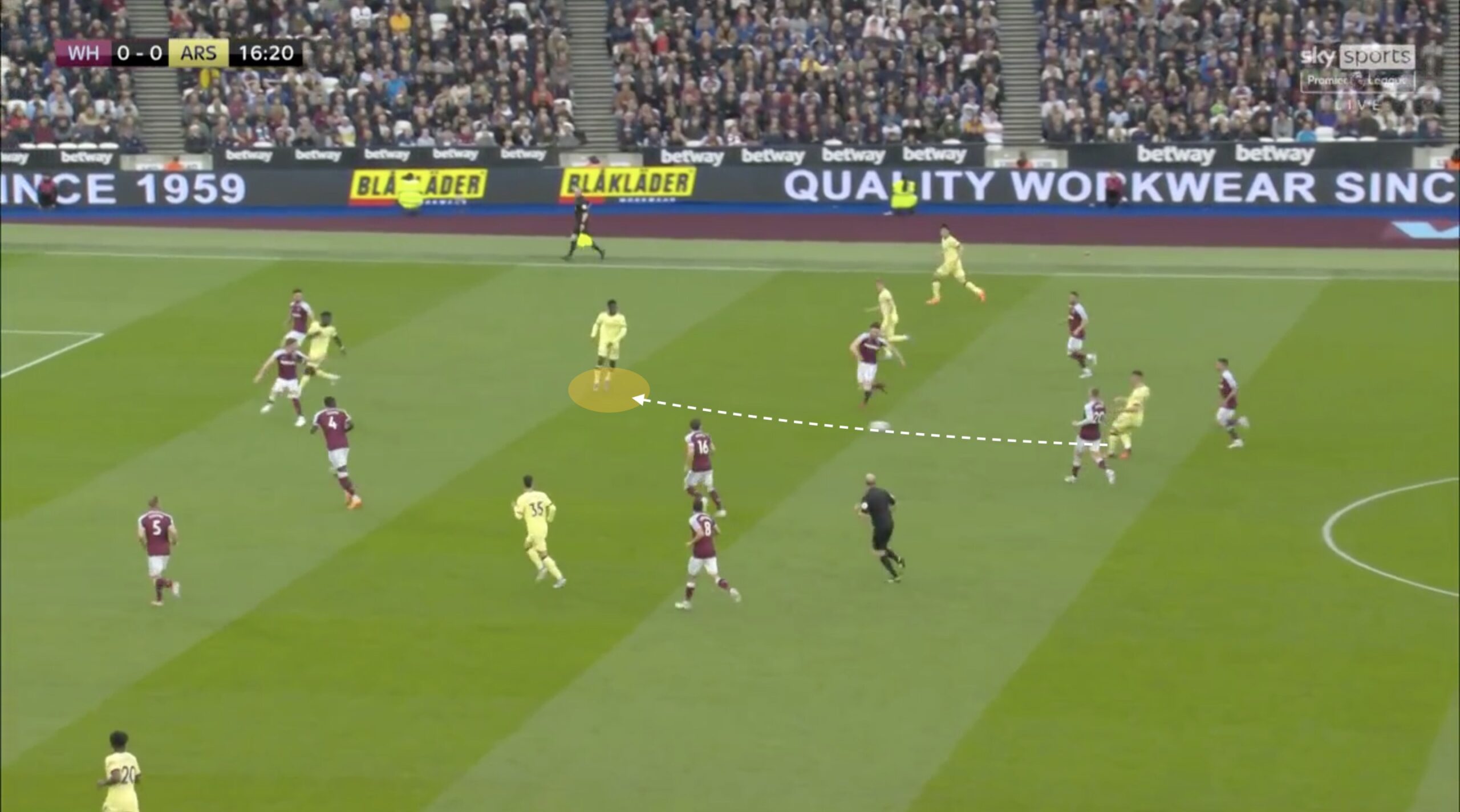 The shot that followed was poor but the movement was sharp and his shooting soon caught up.

The really striking thing about the rest of Nketiah’s efforts was how far he carried the ball before getting a shot off. We saw it when he scored at Stamford Bridge and he was unlucky not to earn a cleaner sight of goal as he consistently managed to isolate a defender and find space ahead of him before moving forward with the ball and just one thing in mind.

First off, he drives 20 yards with the ball before forcing a save from Fabianski. 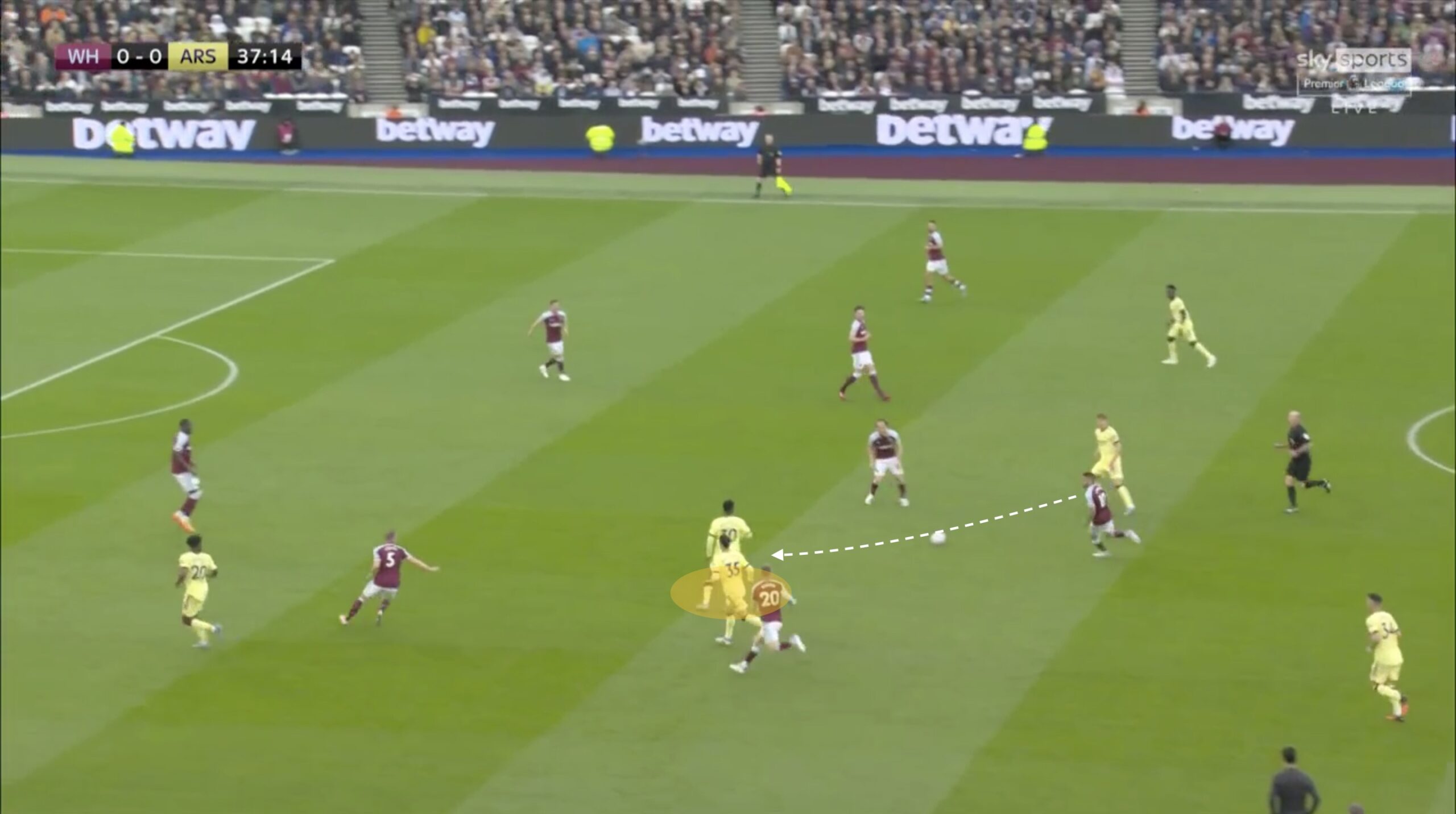 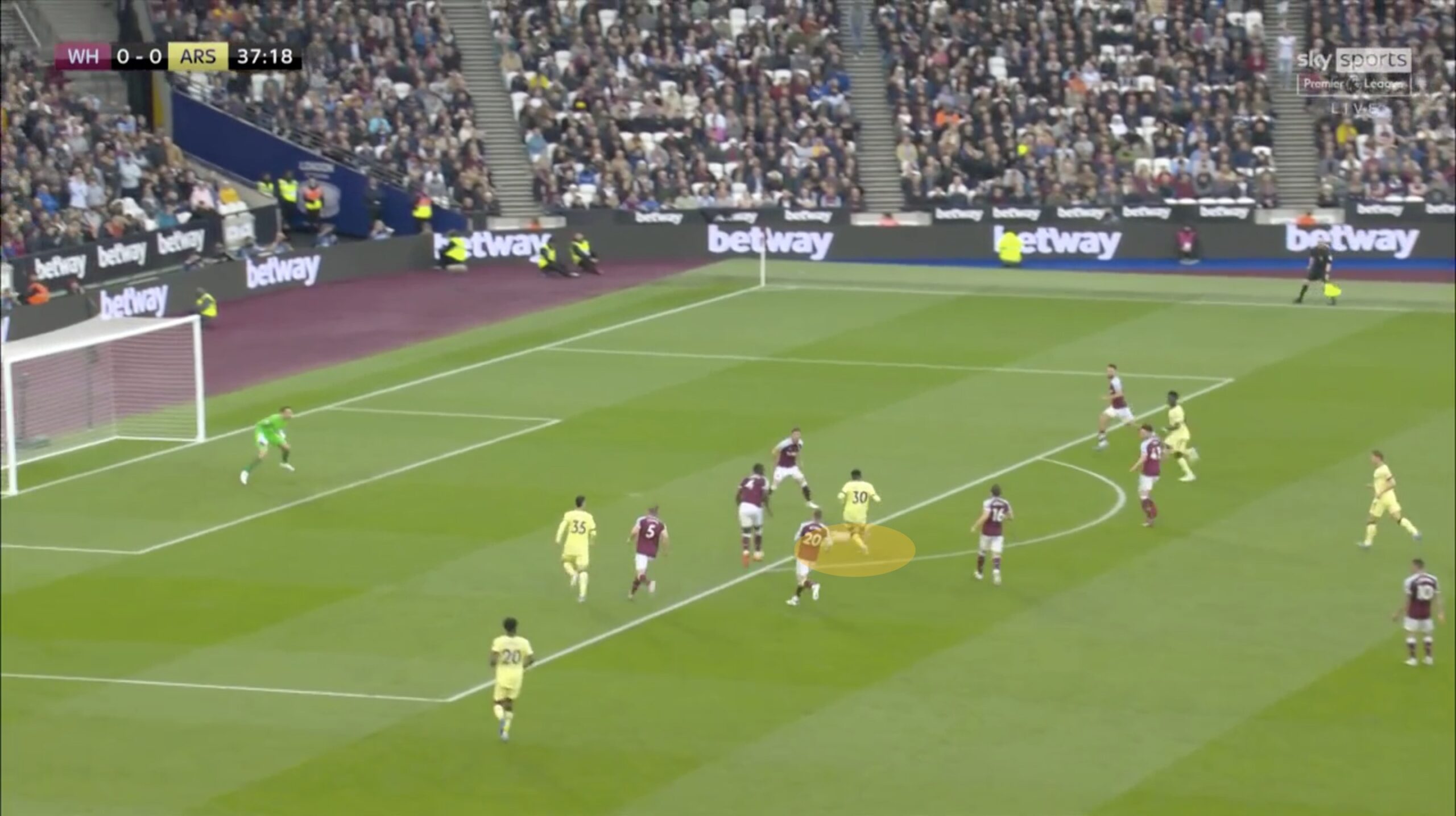 And then, after Arsenal retook the lead Nketiah became an outlet. Arsenal didn’t see much of the ball after Gabriel’s goal, with West Ham having 63.5% possession between that and the final whistle, but kept West Ham down to just one shot while taking seven. Nketiah took four of those and they were almost all identical.

Fancying his chances against Zouma in a race, the Arsenal striker would peel off to the left and the ball came his way again and again. 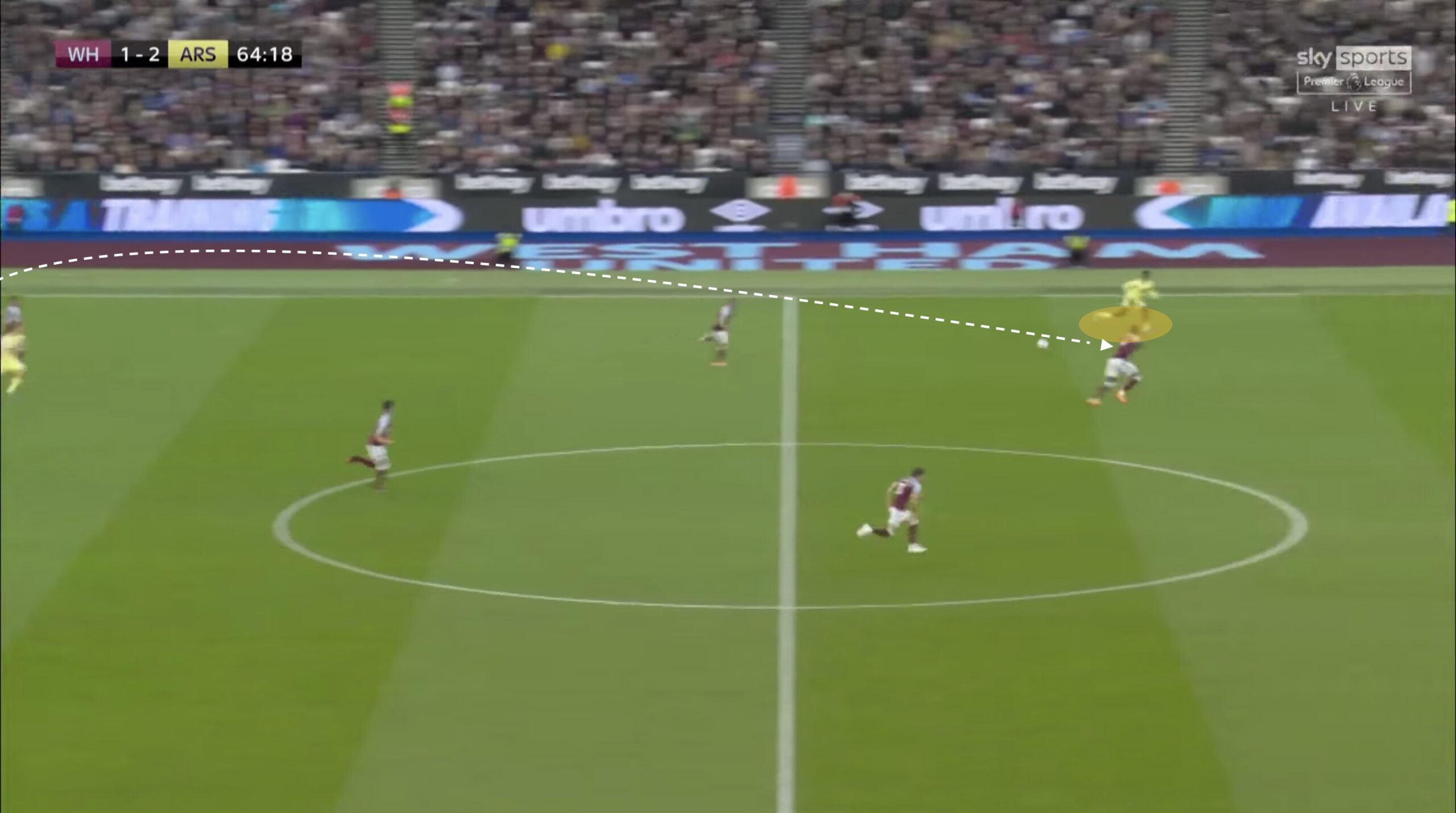 There could have been some better decision making at times but Nketiah didn’t waste an of these moments, getting upfield and taking his shots. 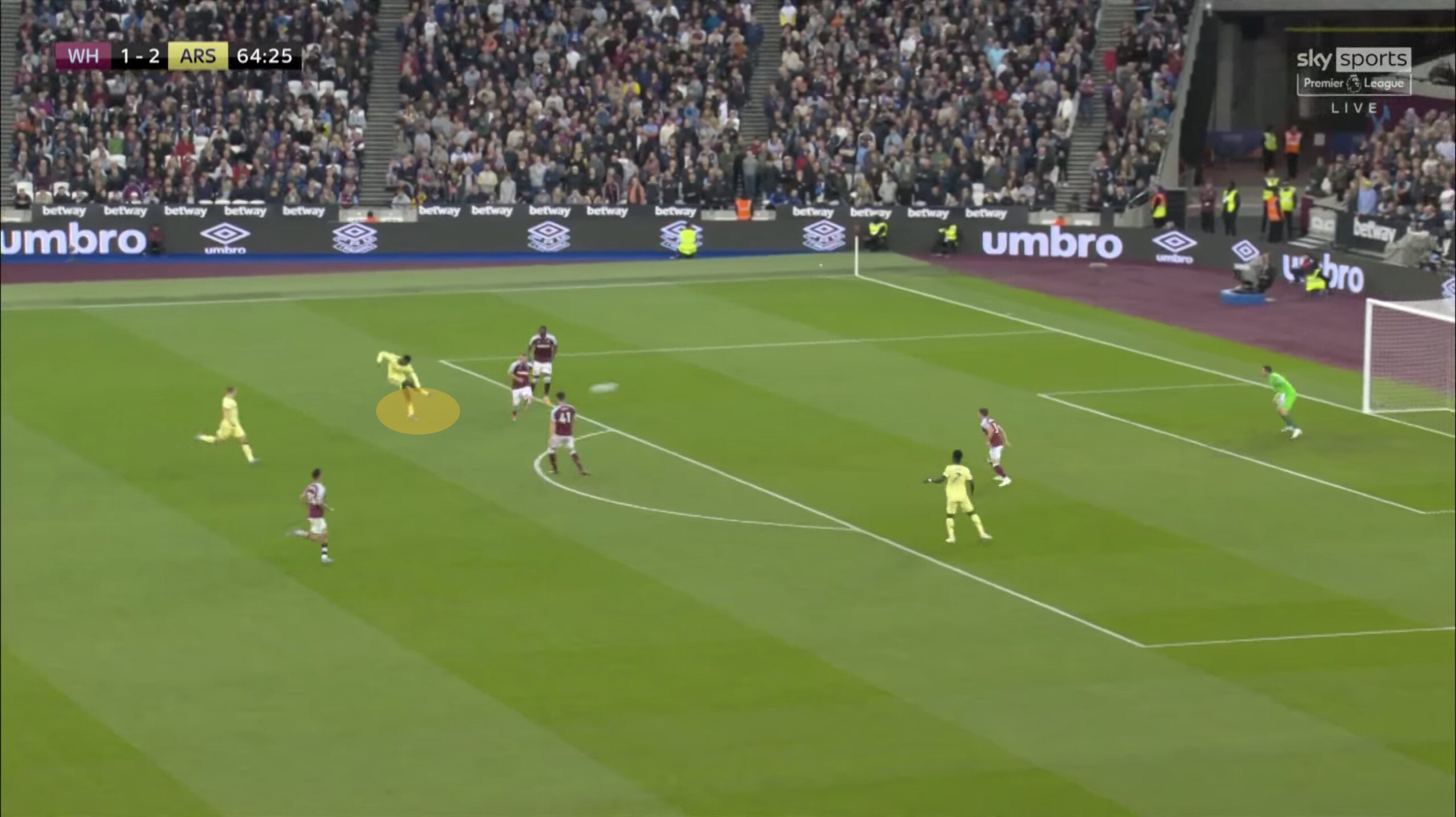 As soon as the counter was there to be had, he was peeling over to Zouma’s side and pushing the defender back. 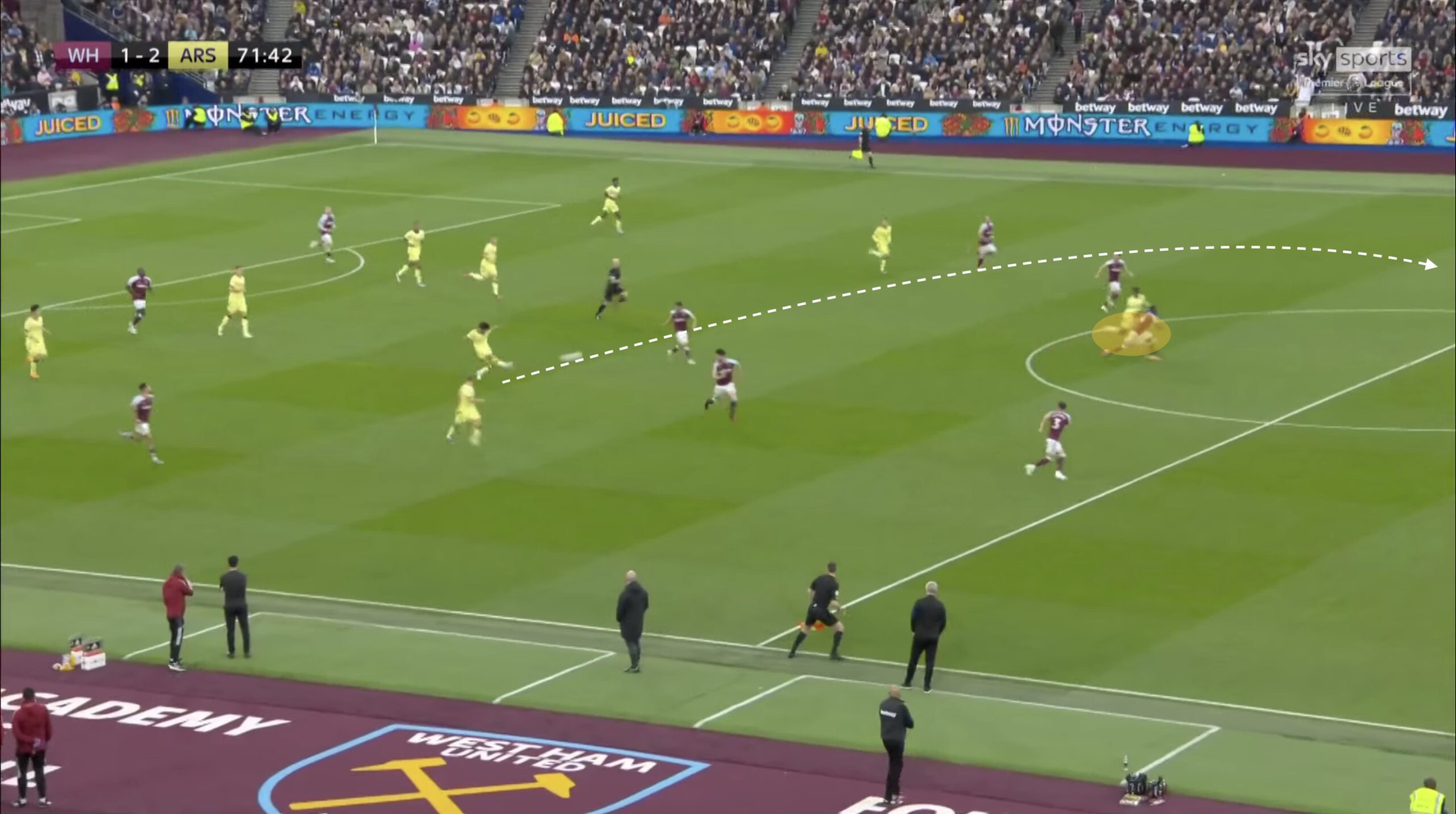 The sheer distance he carries the ball each time, controlling it closely enough not to ever really be challenged, was impressive and he was incredibly unlucky to just miss the far corner on this occasion. 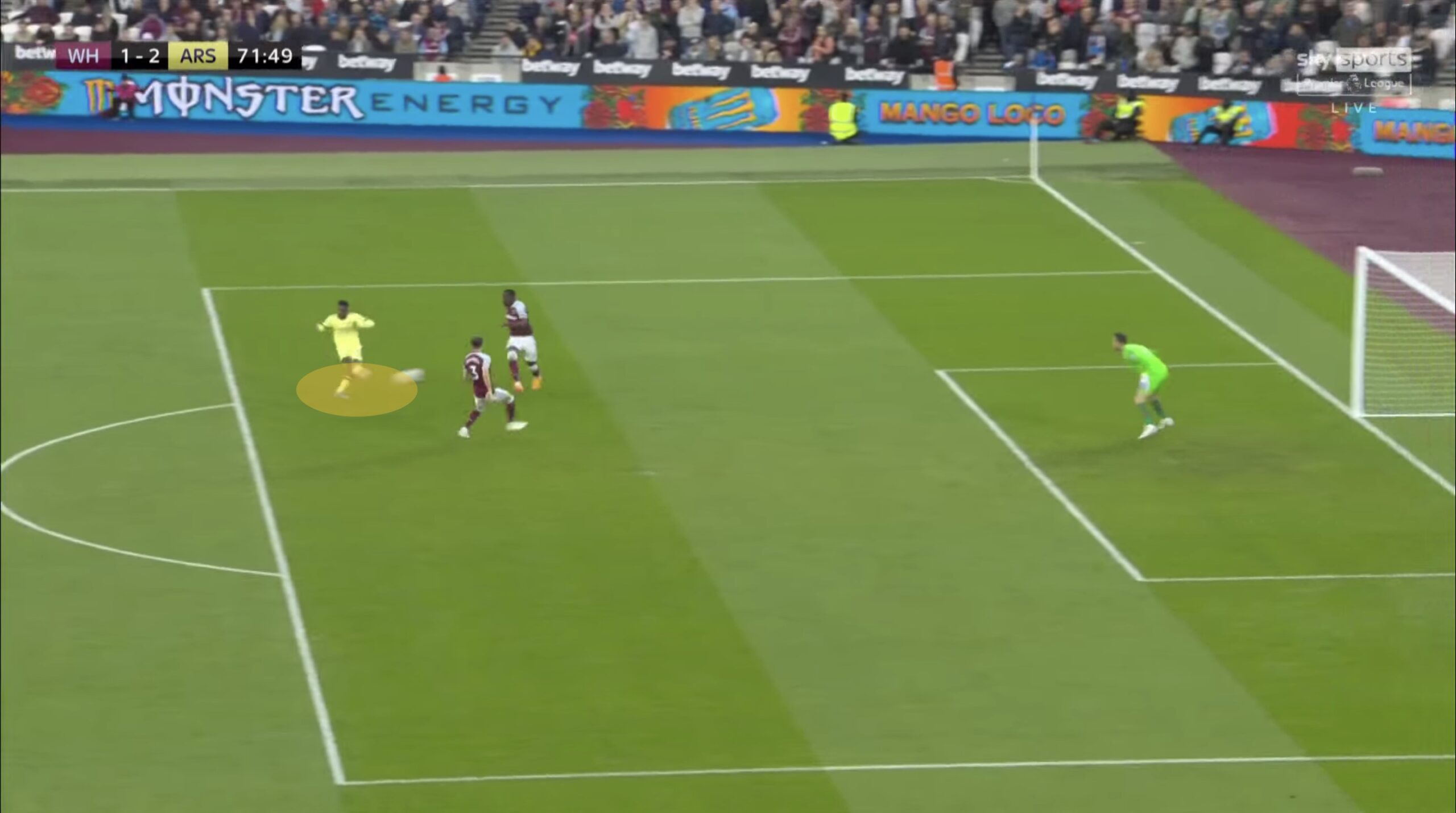 But he wasn’t undeterred and made the same run off the ball again. 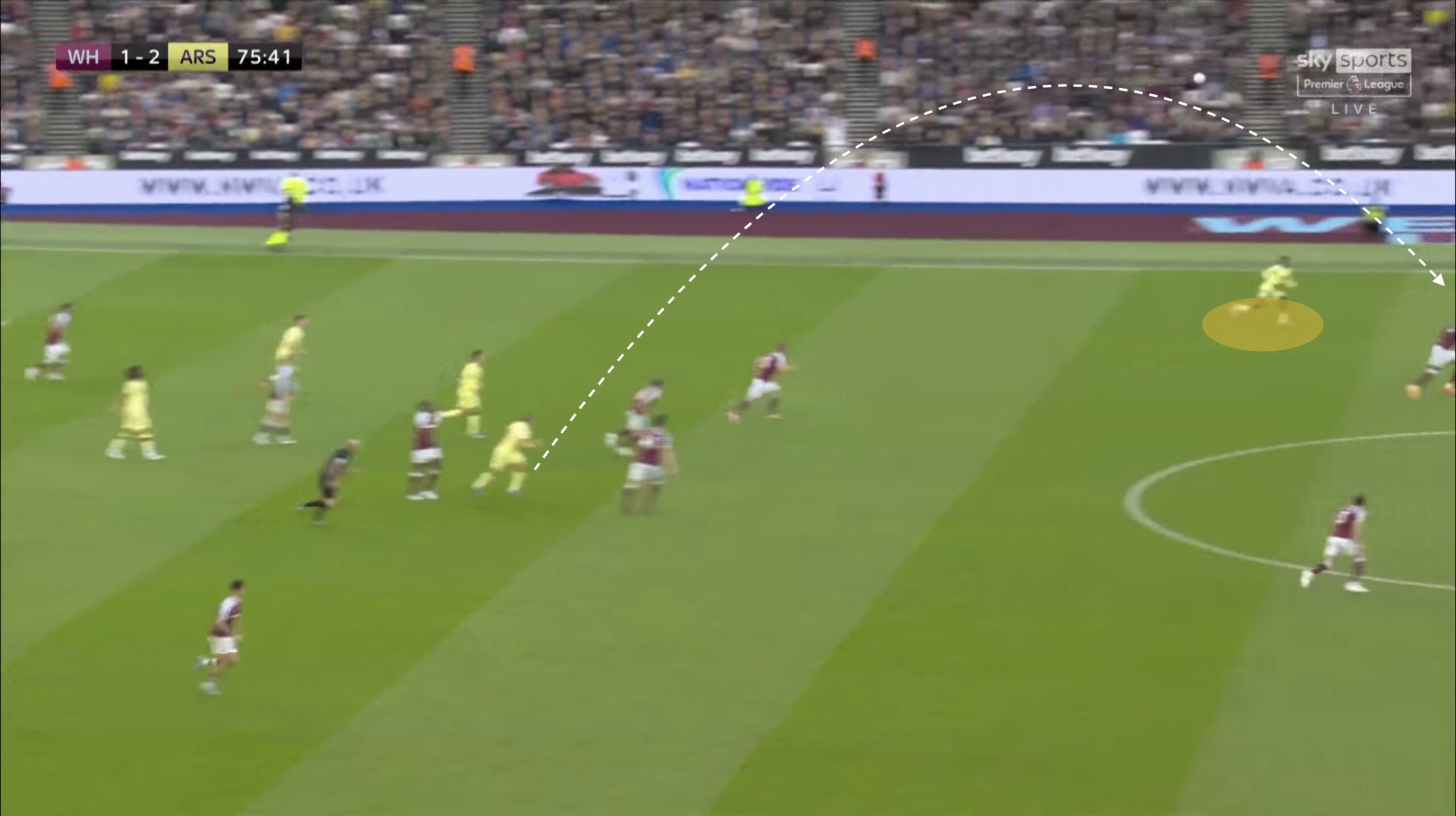 On that occasion there was no shot but Nketiah carried the ball from his own half to the corner of the West Ham penalty area.

And then he drove forward again when, like against Chelsea, he pounced on a loose backwards pass from an opposition defender. 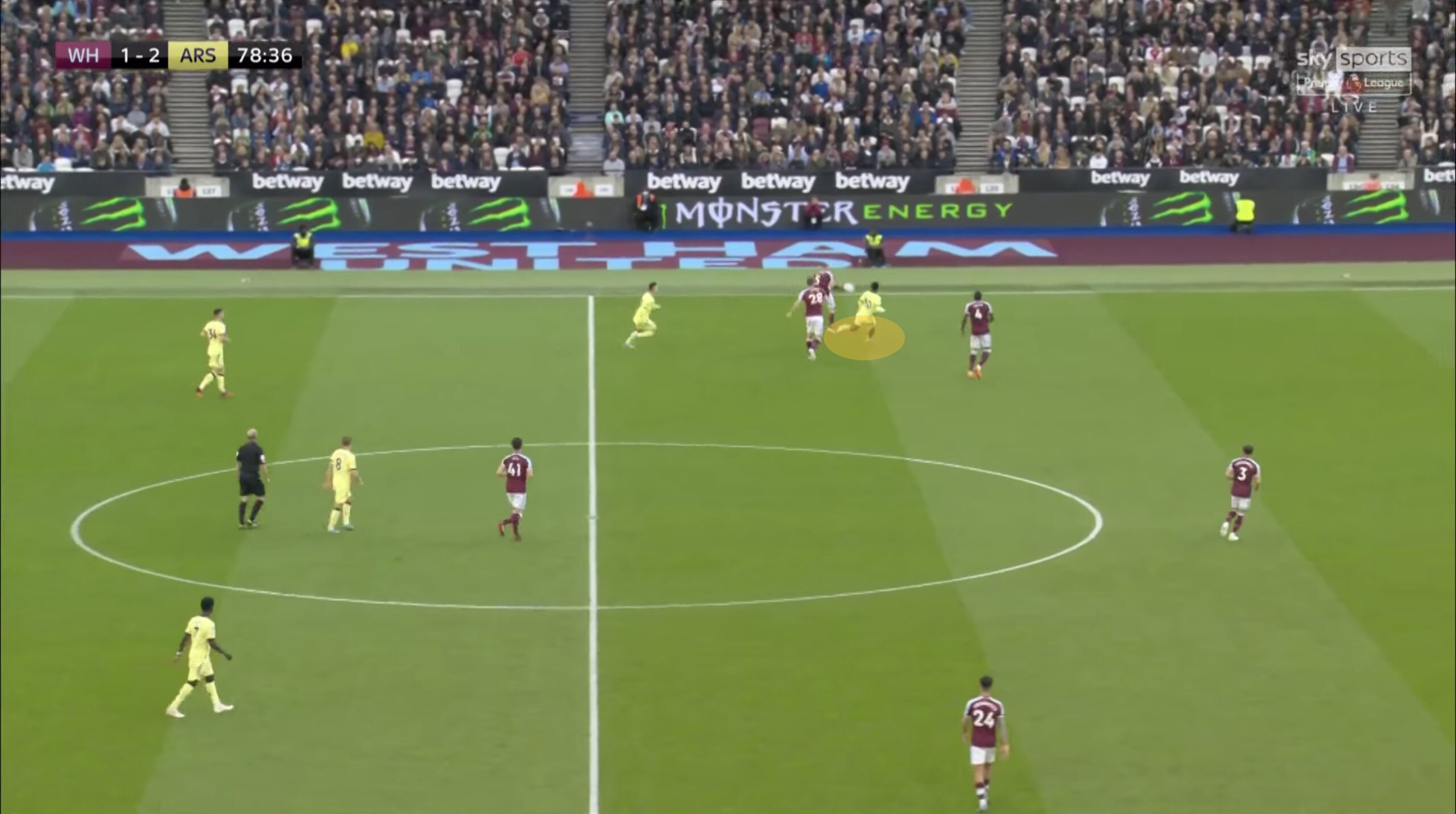 Before forcing Fabianski into another save. 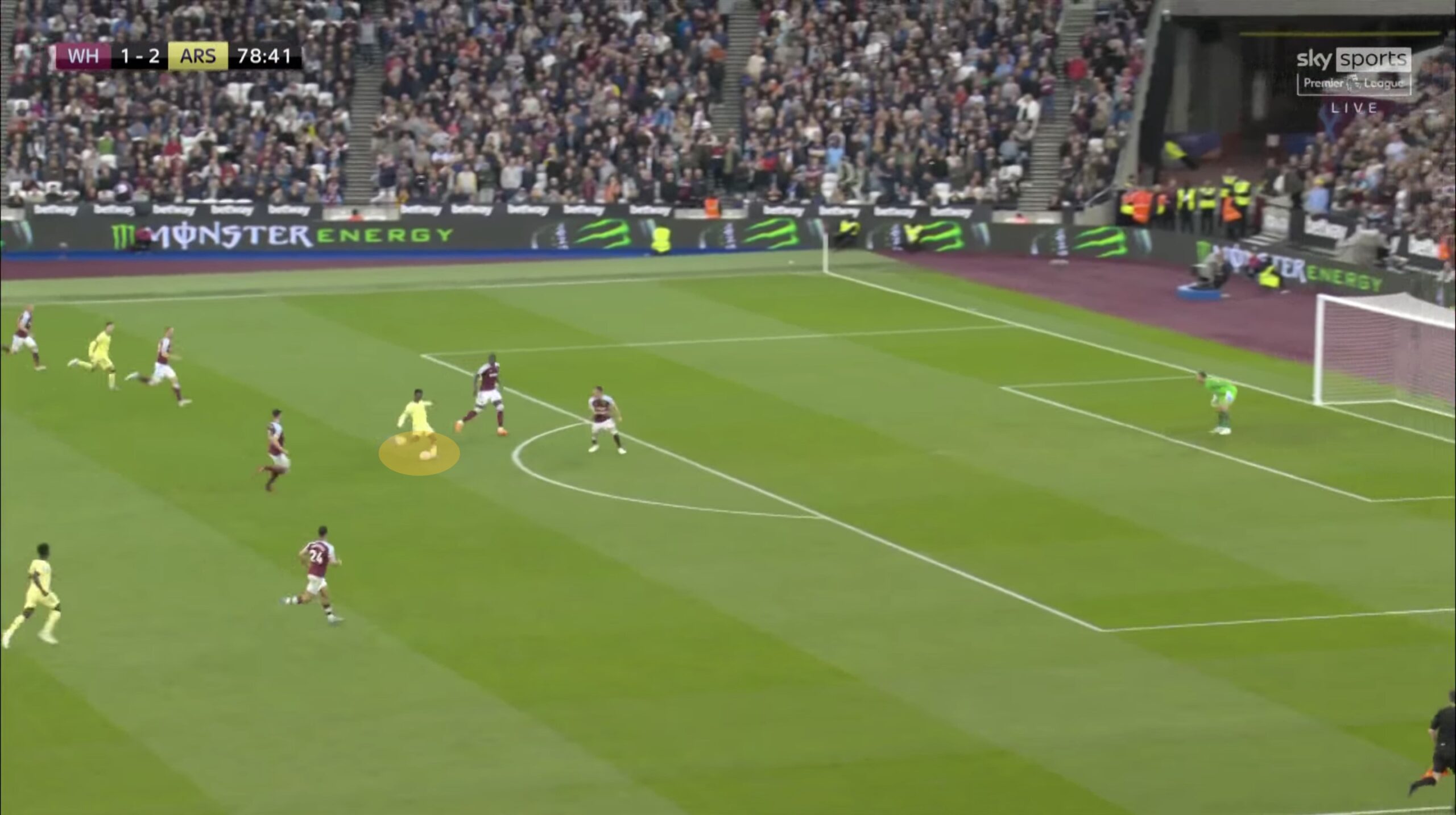 There was no reward in the form of goals and there will likely be no long-term reward at Arsenal — it feels like Nketiah has decided his future belongs elsewhere — but this was a superb performance from the 22-year-old.

He dropped deep to offer an option and link play. He was a viable option when Arsenal felt the need to go long. He drove at the defence and got shots away.

Whoever Nketiah plays for next season, they will have a striker with a lot of ability. And whatever happens at Arsenal in the meantime, Sunday felt like a glimpse of just how much a modern centre-forward should be able to offer the side when leading the line.