A 1-0 defeat to Southampton just over a week ago left Arsenal’s top four hopes looking slim. Very slim. A third loss in a row, the game on the south coast had seen the Gunners attempt (708) and complete (612) more passes than in any other Premier League game this season but chances were few and far between.

There weren’t as many passes in the loss against Crystal Palace two weeks earlier but the pass completion was even higher at 86.6% — Arsenal’s third highest pass completion in a game this season — in another toothless display.

And so it seemed, with Kieran Tierney and Thomas Partey out, Arsenal couldn’t both control games and remain dangerous. But you can influence games without having the ball too. You can control your team, to an extent, and you can set up plans to make life hard for the opposition.

We saw Arsenal set up with a back three in the opening minutes at Chelsea on Wednesday, only to change to a back four, with Ben White at right-back and Bukayo Saka further forward minutes into the game. With Chelsea playing two strikers, instead of having Timo Werner and Mason Mount flank Romelu Lukaku in a 3-4-3, Arsenal didn’t need a third centre-back to match them man for man.

Mikel Arteta spoke about preparing the teams with different plans after the win:

But if it was simplified for some, there are clearly others who were more involved in discussions and what approach Arsenal should change. It took just a minute for Granit Xhaka and Martin Odegaard to signal to the bench … 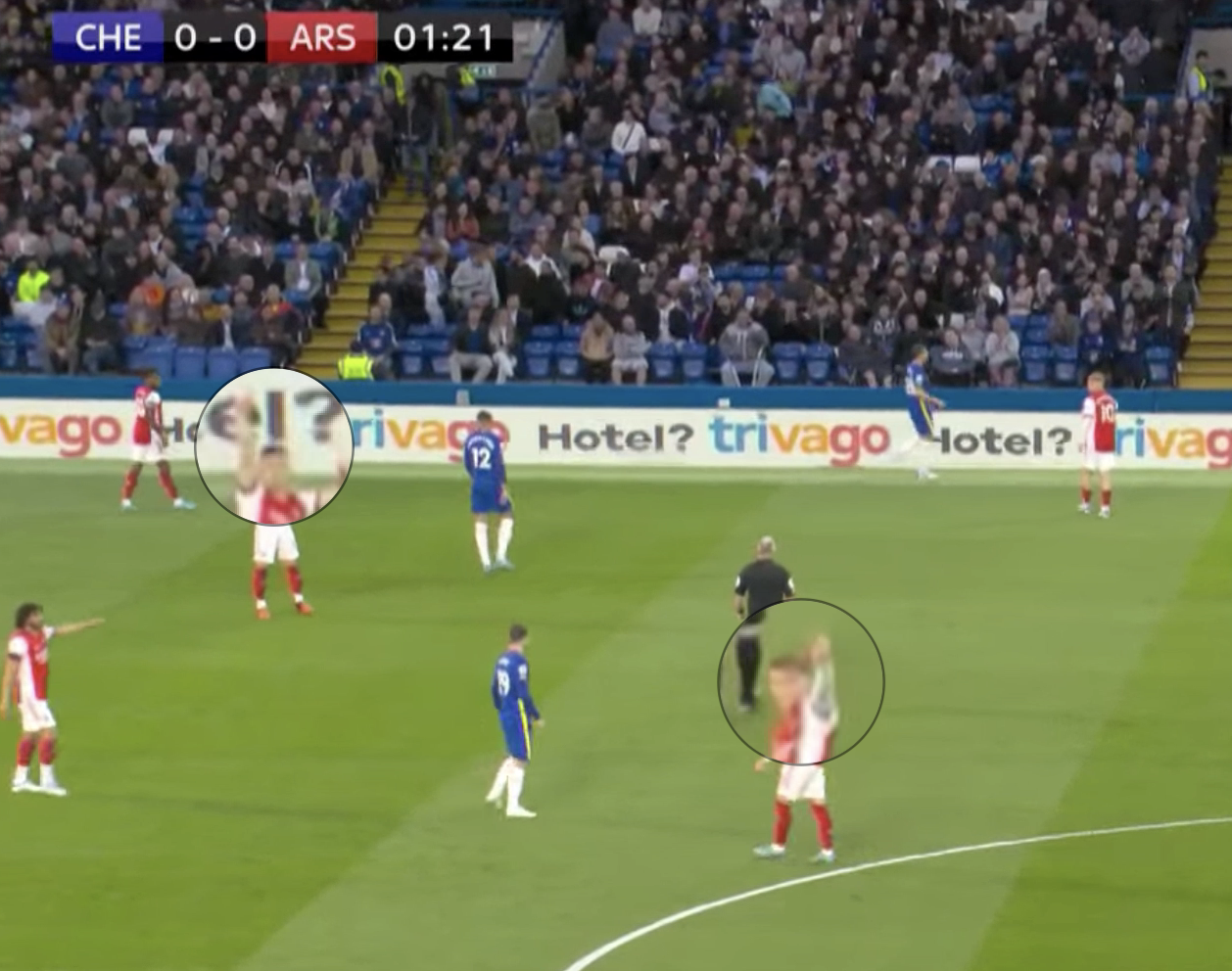 … and Arteta to acknowledge them. 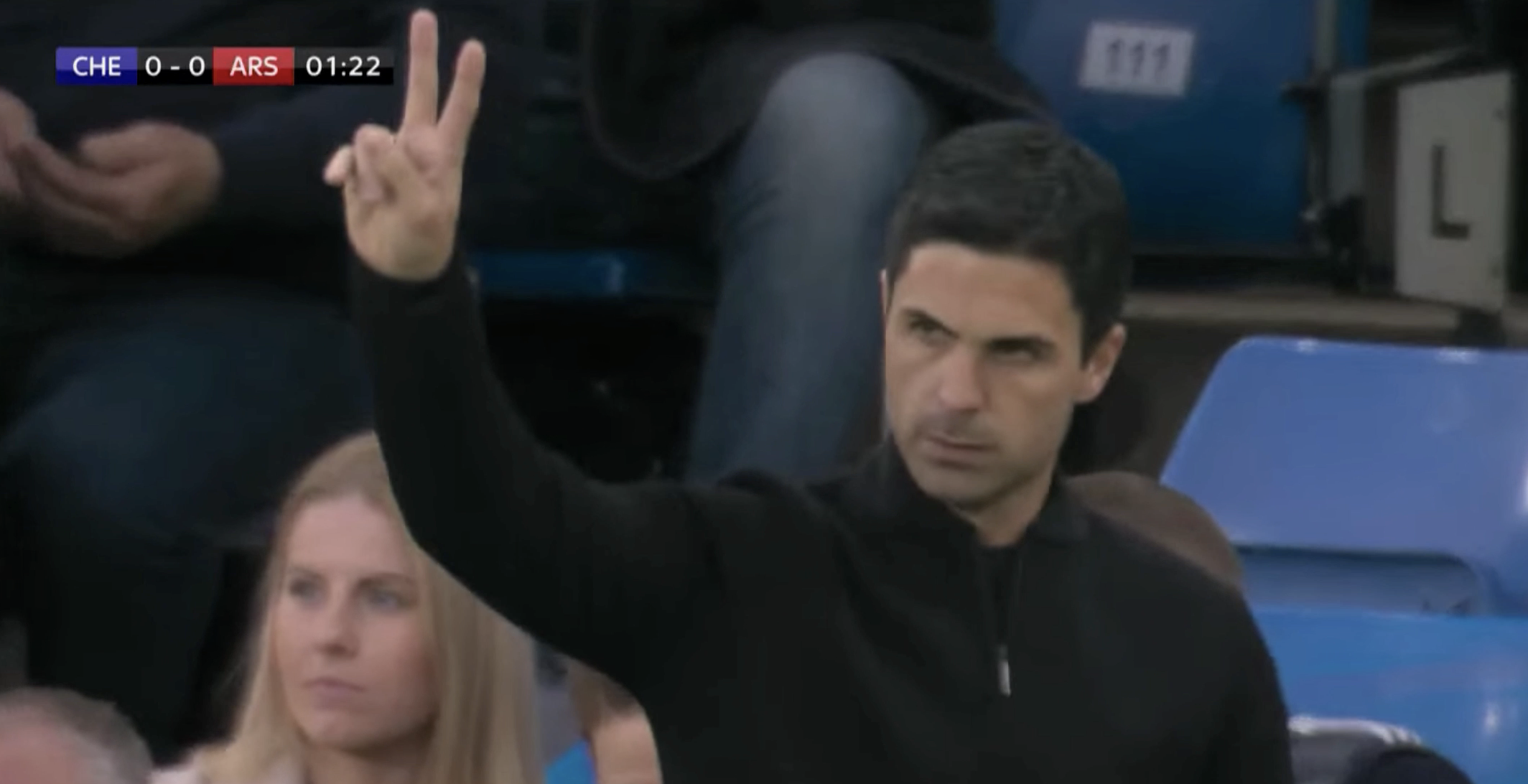 The plans may have been simplified but the two midfielders clearly knew what the were to look for in the opening stages and everyone knew how it changed their jobs. The idea from Chelsea early on, with a three-man midfield, was to get Mason Mount outside of Martin Odegaard, stretching Arsenal on that flank as Bukayo Saka was pinned back by Marcos Alonso. Malang Sarr had time and space on the ball at left centre-back and Arsenal were being pushed back easily, unable to press as Mount found space too far wide for Elneny to follow him without leaving gaps. 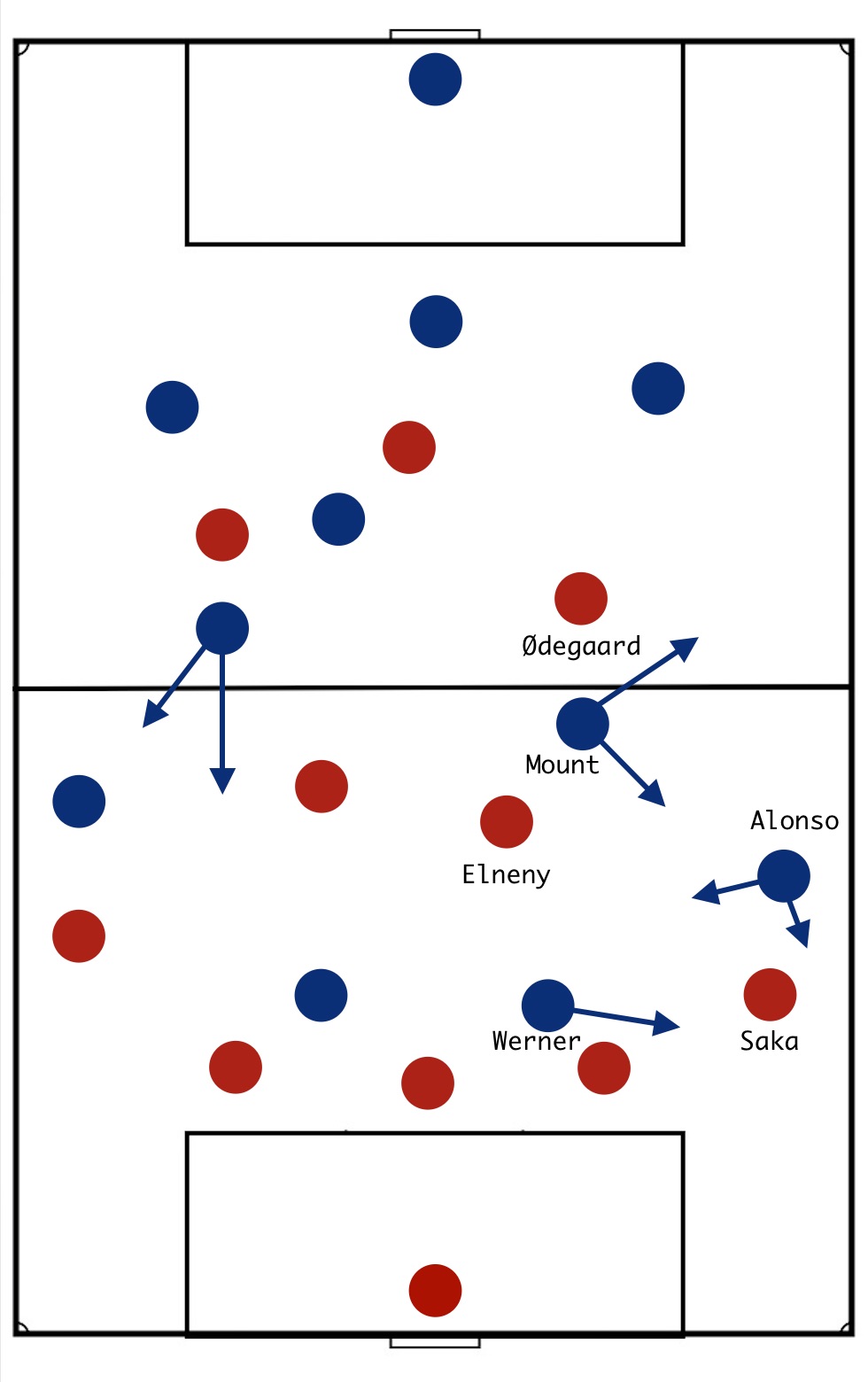 Arsenal adjusted to a back four and suddenly had a foothold in the game, with Saka pressing Sarr, Ben White moving wide to cover Alonso (or Werner, when he drifted out there) and Odegaard positioned more centrally on N’Golo Kante. Without the right so collapsed, White would mark Mount when the ball was on the opposite side and Elneny could move across more freely to cover the midfielder. 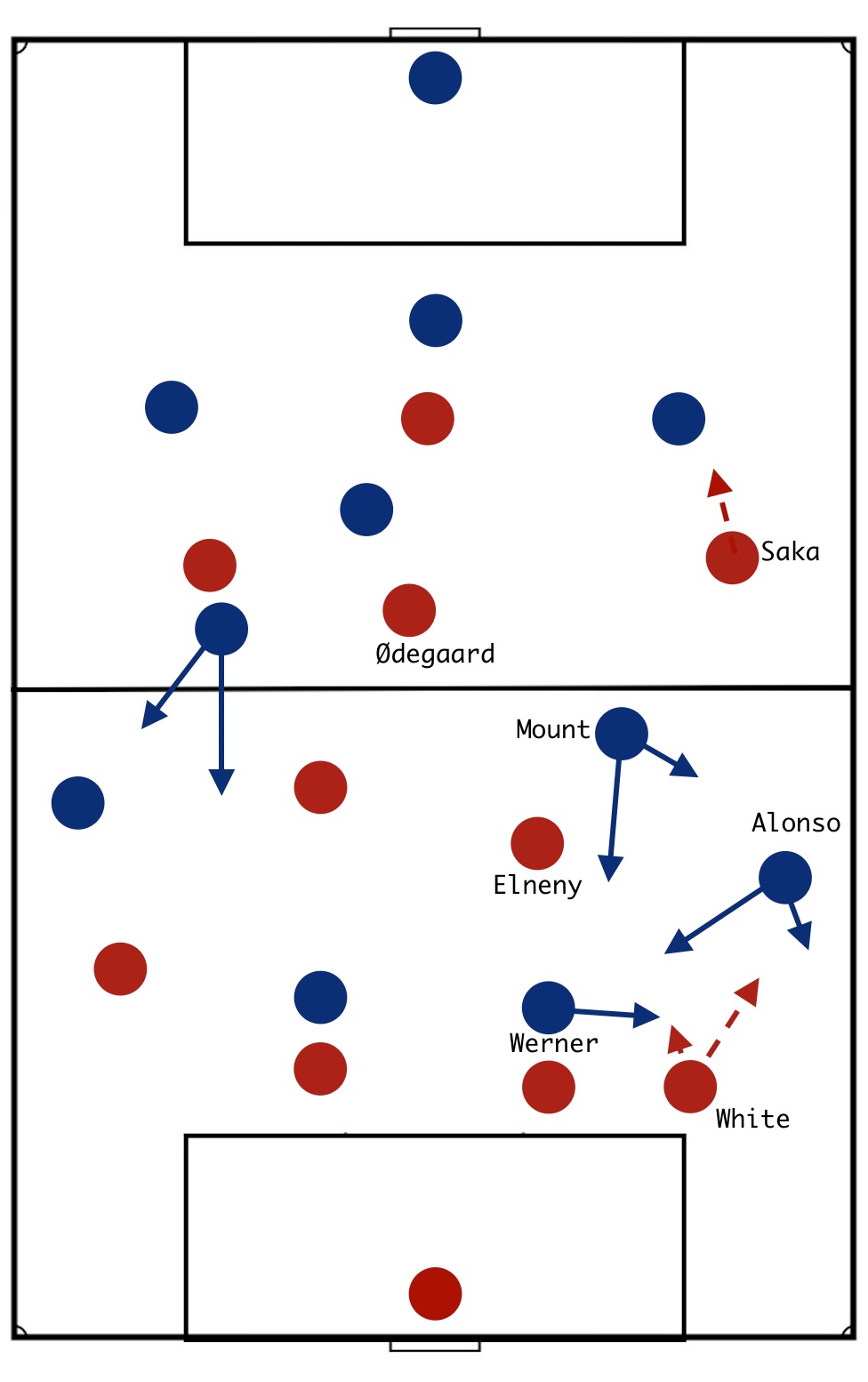 Arsenal pressed higher more effectively and played chicken on the right as Chelsea looked to overload that flank. Freed from having a five-man frontline to cover man-to-man, White could shuffle between pressing Alonso and covering Werner depending on the striker’s positioning. Mohamed Elneny could play closer to Mount, who could no longer drop into the areas between Sarr and Alonso with Saka stationed there, and Arsenal ran the risk of being stretched defensively in the knowledge that it meant Saka could be released higher up the pitch when the Gunners won possession.

It was effective enough. The game may have felt chaotic but Chelsea badly struggled to create clear chances: the Blues’ 0.7 expected goals was the fourth lowest they’ve created in a Premier League match all season.

Though Arsenal shifted to more of a back four, there was the typical asymmetry on the flanks that we’ve come to expect. Part of coping with injuries is finding ways to cover the flaws and use the strengths of the players who come into the side. Nuno Tavares is a player who does not have Kieran Tierney’s strengths but also adds things that Tierney can’t.

Tavares defends higher up the pitch and more actively, where Tierney is more likely to hold his position and not dive into tackles. The Scot is nowhere near as aggressive and makes the team more defensively secure.

But there are positives about the Portuguese too. His more aggressive nature allows him to steal possession more often and higher up the pitch.

With the ball, Tierney is a much more accomplished and consistent passer but Tavares adds drive and unpredictability, regularly beating his opponent and getting into the box.

It was his effort to get into the area that saw him score the opener against Manchester United on Saturday and it was his high positioning that meant Cesar Azpilicueta was one of the Chelsea players reluctant to close down Emile Smith Rowe as he arrived to put Arsenal 2-1 up at Stamford Bridge. 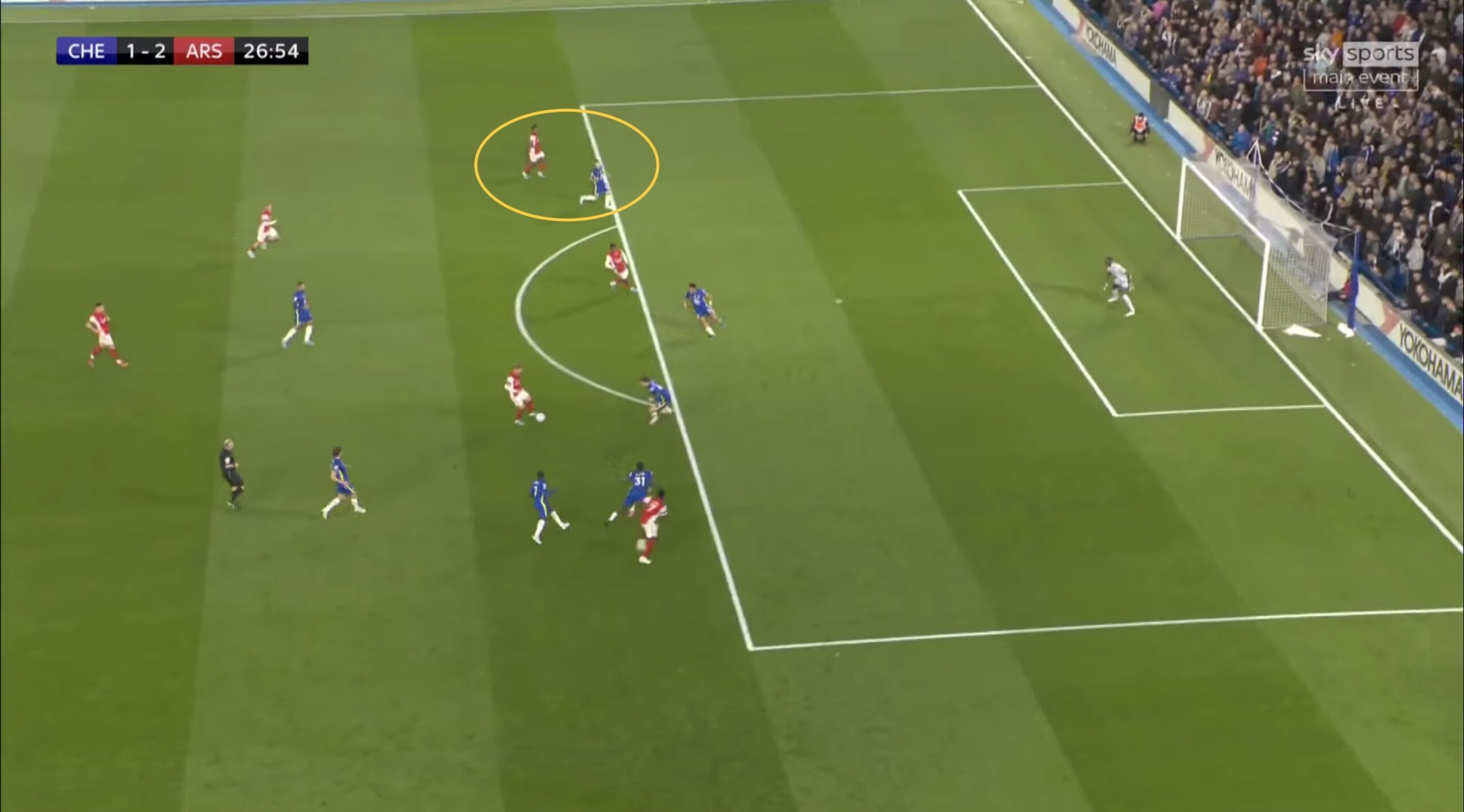 Instead of worrying about the parts of Tierney’s game Tavares can’t replicate, with the team considered a finely-tuned machine that has to play a certain way, Arsenal appear to be focusing on what he can add to the team. Hopefully his defensive flaws will matter even less when Takehiro Tomiyasu returns for Cedric Soares and the right-hand side of the backline becomes more solid again.

The same goes in midfield. After Albert Sambi Lokonga struggled to have an impact against Brighton and Southampton, Mohamed Elneny has come into the side for the two wins in the past week. Nobody in the squad can match Partey’s ability to win the ball back in duels and break through pressure. Arsenal initially seemed to hope Lokonga could fill Partey’s shoes, Arsenal now seem to be leaning into what Elneny can do and trusting Granit Xhaka to pick up the slack when it comes to moving the ball upfield.

Elneny plays it very safe in possession, never dribbling past a man and rarely completing a progressive pass, and boasts the best pass completion in the entire squad this season. But Arsenal are playing a more attack-minded left-back and have Xhaka who can break lines very effectively. The focus is switching from the middle of the pitch to the flanks again.

What Elneny can do, as well as always showing for and rarely losing the ball, is win it back quickly. He sniffs around the edge of the area and hunts play down, pouncing on loose balls. He tested David De Gea by doing just that in the first half and he teed up Xhaka for his goal in the second. Elneny can be truly useful to the team, using these moments to not just snuff out counter-attacks but help Arsenal keep the pressure on for a second or third phase of an attack that seems to have broken down.

The added threat at left-back with Tavares is being combined by Emile Smith Rowe’s abilities to combine play rather than Gabriel Martinelli’s more gung-ho, head down, full throttle approach. Could a team really afford, in big games especially, to have two turnover machines in Martinelli and Tavares down the same flank?

It’s all about balance. Arsenal can’t replace Tierney at left-back or Partey in midfield but they are finding ways to make the team function with replacements who aren’t exactly like-for-like. So they have shuffled the pack in a number of areas, and literally shuffled the shape against Chelsea, to find solutions.

Arsenal are more predictable in midfield without Partey but have a less predictable left-back to make up for it. How erratic he is can be balanced out by using safer options in midfield and ahead of him on the wing. It feels like Mikel Arteta is now leaning into the options available to him and having them produce the football their capable of, rather than trying to figure out ways to bend the team to his own will. He did that to an extent during the 2020 FA Cup run but it meant defensive football and it doesn’t look like that this time around, with games still not under Arsenal’s control but more open. Games are still being decided by the odd goal but matches look more likely to end 3-2 than 1-0.

The question now is to what extent Arsenal can keep the chaos under wraps against teams who are less likely to attack them. Unsettling the game and then defending rigidly worked against Chelsea but an unsettled and open match actually gave a poor Manchester United team a chance to snatch a result on Saturday. Chaos will be necessary for a team that can’t control games as it would like but chaotic football is not something that cannot be managed and how well Arsenal over the next five games will decide the fate of the team this season.