“In the first half especially we had many moments where we pressed them high, sometimes they broke our press, they’re a great team so they have many solutions, but even on the goalkeeper, we tried to press them high many times and ended up winning the ball in their half. So we were ready to go on the high press, but against this Man City, sometimes you are forced back, but when you are in your own half, it’s about how you defend compact and break from that and we did that a few times really well.”

Albert Stuivenberg explained that “frustration and being proud of the performance is both there” after the New Year’s Day defeat to Manchester City and you’d be hard pressed to find an Arsenal fan who felt differently. The post-match talk was largely about the performance of the officials but this was the best Arsenal display against a top team for years.

Manchester City are well on course to stroll to a fourth Premier League title in five years and have now won all 10 Premier League games in that time but Saturday’s game was different: it was the first time in that run that Arsenal can genuinely feel hard done by. City obviously dominated, both before and after the red card that ultimately changed the course of the match, but they didn’t do all that much with it.

The first half saw Arsenal press high, denying any access into Rodri, who usually serves as City’s hub in midfield. The Spanish midfielder has completed more passes (1274) than any other midfielder in the league this season: he is crucial to City circulating possession, keeping the ball, drawing teams in before they cut through the press. Martin Odegaard did a superb job of blocking City’s route through the centre while also applying pressure on the ball and the champions often struggled to play out with their deepest midfielder completely cut off from the backline. 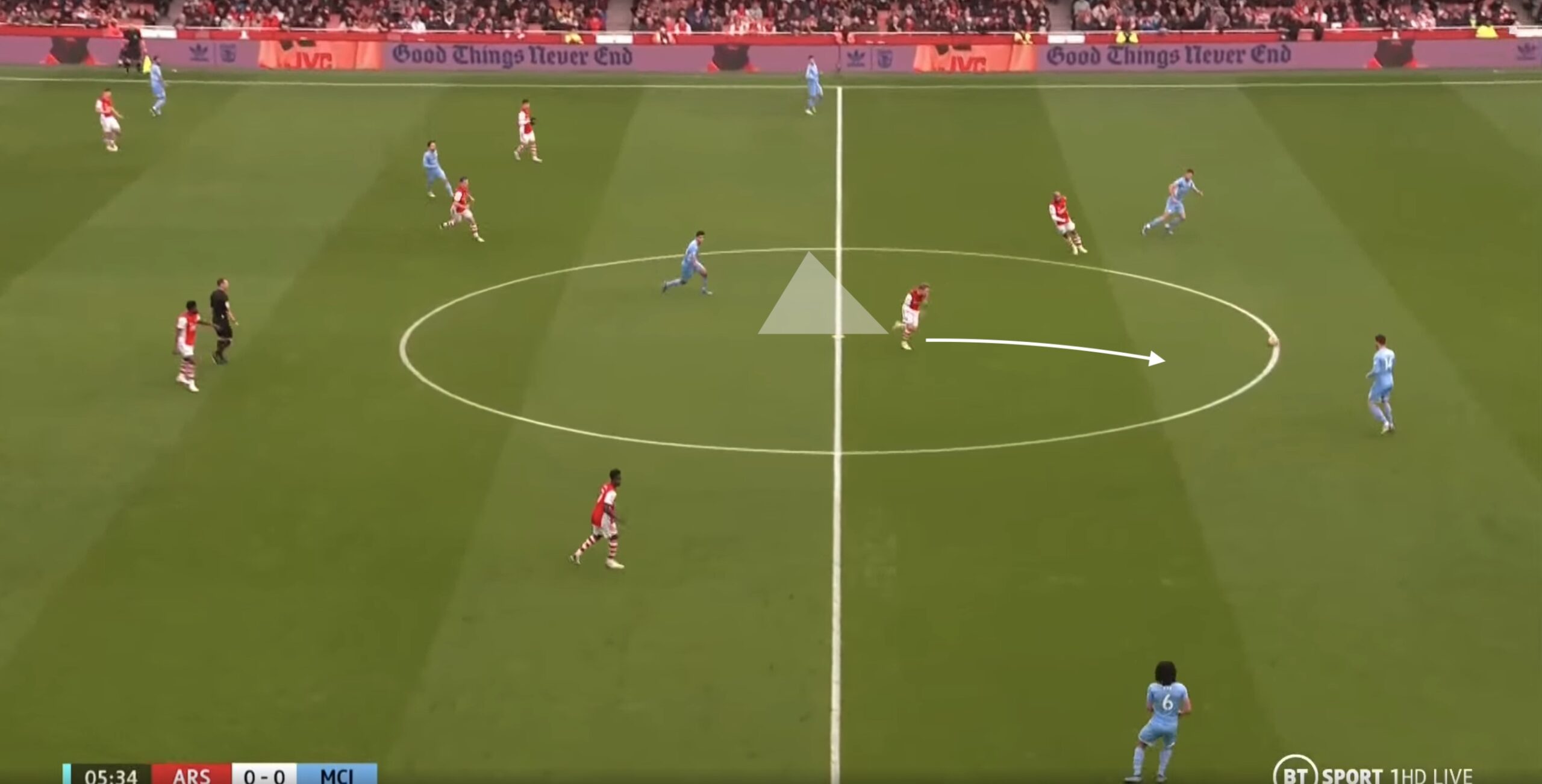 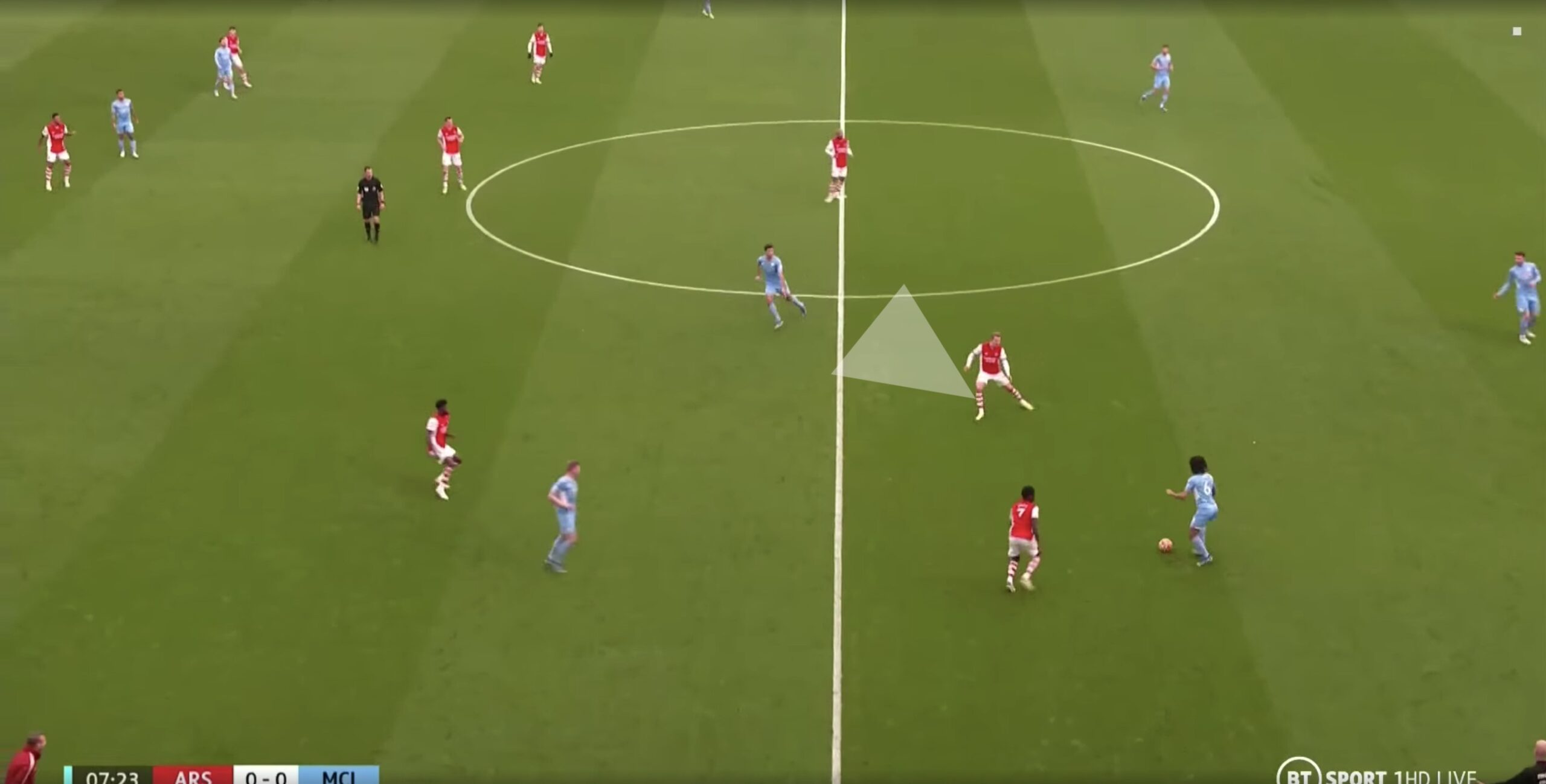 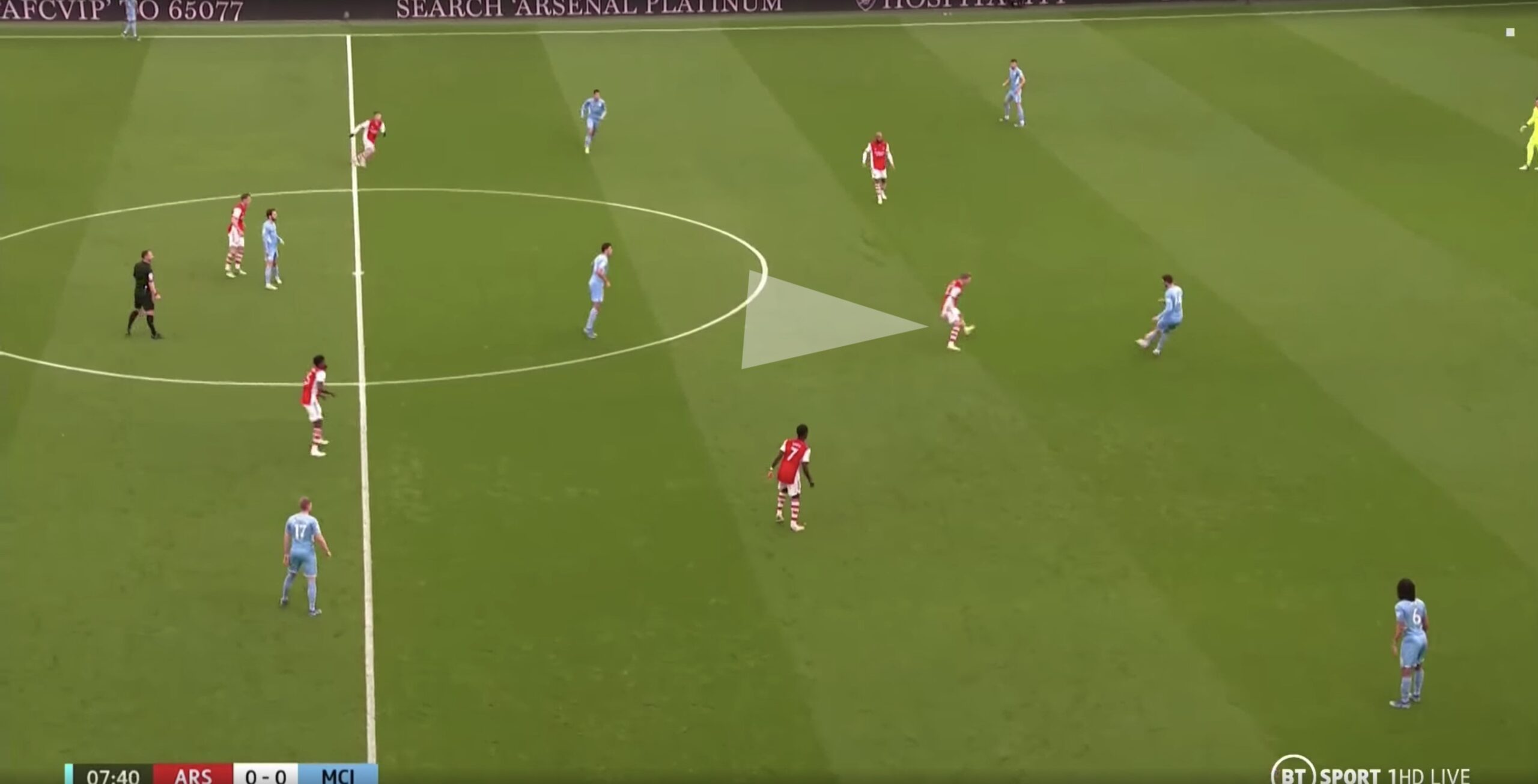 Arsenal were totally in-sync for most of the first half. If Odegaard moved higher to press a defender on the ball, one of Granit Xhaka or Thomas Partey would usually push up in his place, marking Rodri tightly so even a couple of quick passes he wouldn’t become an option. Odegaard has become the team’s instigator when it comes to pressing high, blocking passing options, and forcing the ball wide so teams can be pressed more easily or are forced to go long and Saturday showed he and the rest of the team are now ready to do that against the most efficient of opponents in possession.

The lack of ability to play through midfield saw City forced back and Arsenal didn’t tend to stop there, man-marking all options on the ball and pressing aggressively when a ball was underhit, played too ambitiously, or forced a City player to have possession facing their own goal. The result was Pep Guardiola’s side frequently struggling to play out, hitting the ball long (where Arsenal can dominate, with the physical prowess and aggressiveness the back four) and the Gunners learned from the poor pressing against Chelsea early in the season, with Kieran Tierney remaining in the back four and Gabriel Martinelli (when the ball was in City’s half) and Granit Xhaka (in front of the Arsenal penalty area) sharing the job of tracking Joao Cancelo as he drifted infield, rather than allowing Tierney to become outnumbered.

The numbers (per Statsbomb, via FBRef) only underline how effectively Arsenal pinned City back. Arsenal forced possession back so well that Ederson attempted the most passes (44) of any game all season and the most long passes — passes over 30 yards — (21) of any game this season as his options short were cut off with the game 11 v 11. As per Opta, he attempted 31 passes in 59 minutes up to the red card and just seven passes in the time after as Arsenal had to defend deeper and take fewer risks. It’s not about having or not having the ball, but about where the ball is, and most of the first 45 minutes took place in the Man City half.

The visitors had the second highest proportion of their touches in their own box (11%) and their own third (32%) of games in 2021/22, with their away game against Liverpool the only match where they have had a greater proportion of their touches in those areas. Arsenal won three tackles in the final third, nobody has bettered that count against City this season, and made 72 final third pressures, both a high for Arsenal in any game this season and a high for any opponent facing the champions. And those pressures  were fruitful: Arsenal have only had more successful pressures (a successful pressure is counted when a team wins the ball within five seconds of pressuring an opponent) against Leeds this season and no team this season has had as many successful pressures against City this season as Arsenal did on Saturday.

And all that is despite playing a third of the game with 10 men. Following Gabriel’s red card Arsenal defended deeper but with excellent discipline and compactness. All that added up to an excellent defensive performance. City’s 14 non-penalty shots was their third fewest in a game this season. Their non-penalty xG was just 1, their third lowest in a game this season, and their average shot was taken from 18.4 yards, the third furthest figure of the season. Ultimately they scored from their only two shots on target.

Arsenal didn’t have many touches — the third fewest in a game against City this season — but had the ball in dangerous areas. A huge amount of the game was played in City’s half whether Arsenal had it or not. 114 of Arsenal’s 363 touches (31%) came in the final third and 20 (5.5%) in the penalty area. No team has had such a high proportion of their touches against Man City in such advanced areas in 2021/22 so far.

The attack has clicked lately and Arsenal played the ball quickly and played it forward whenever possible, making the pitch big with Gabriel Martinelli and Kieran Tierney on the left and Bukayo Saka on the right before attacking with superb movement. Odegaard’s penalty appeal came from Saka making a brilliant timed run inside, dragging Nathan Ake across and opening a space for the Norwegian to move into as he collected the ball. For the Arsenal goal, Martinelli stayed wide, keeping Cancelo with him and opening up space for Tierney to drive into while Arsenal overloaded Ake at the back post. Saka scored with his first time shot but could have even passed to Odegaard, making a late run in behind Ruben Dias (who had been drawn to the ball) as the City defence were dragged around.

Losing, and especially losing so late, felt like a real kick in the teeth but that in itself is a different feeling to the one Arsenal fans have become accustomed to in these games. For all the talk that this season’s wins have ‘only’ come against Norwich (twice), Burnley, Tottenham (pre-Conte), Villa, Leicester, Watford, Newcastle, Southampton, West Ham and Leeds, only the top three have won more times this season and Saturday’s performance against arguably the best team in the world should dispel any doubt that Arsenal’s current place in the table is thanks to nothing but the fixture list.

Something has clicked over the last couple of months and the Gunners, while still a work in progress, are showing us plenty to be excited about.