Tactics Column: How different will Arsenal be this Premier League season?

After finishing eighth for the second successive season, a big summer was on the cards at the Emirates Stadium. With the new season just days away, it hasn’t quite happened yet.

As things stand, Arsenal have lost David Luiz and loanees Mat Ryan, Dani Ceballos and Martin Odegaard from last season’s squad. Loanees have returned in the shape of Ainsley Maitland-Niles and Joe Willock (who is set to sign for Newcastle), while Ben White is the only new face brought in with a place in the starting line-up ready for him. Nuno Tavares and Albert Sambi Lokonga, both 21, are likely to provide backup and options for rotation in their first seasons in England.

As for the way Arsenal approach games, we can’t expect all that much to change with more or less the same players. The glass half full take would be to focus on the impact of the pandemic lessening and the footballing calendar now looking more like we’re used to. Though that applies to all clubs, it applies a little more to Arsenal and Mikel Arteta, who has not ever really had the chance to work with his players. With no European football — an advantage that doesn’t apply to all teams and to none of our direct rivals — he’ll have so much time on the training ground he won’t know what to do with it.

More time between games and fewer games in total, we could see Arsenal use that physical advantage to press higher and with more intensity, with the players more capable of handling and repeating the task. If Arsenal are ever going to press with more intensity under Arteta, it has to happen soon. If it doesn’t, it will be very hard to escape the conclusion that he simply doesn’t want these players to do it or doesn’t believe that they can.

The early indications from pre-season are that the team will play with a higher defensive line, with White’s arrival (and a potential partnership with Gabriel) lending itself to the approach. Both players like to defend on the front foot, looking to nick the ball where possible, but also have the pace to cover in behind.

All signs right now point towards Arsenal continuing to use a 4-2-3-1 again this season, with the back three that helped us win the FA Cup used just once (at Stamford Bridge) in the second half of 2020/21. The two big questions this summer have been about the midfield.

One — who will partner Thomas Partey on a regular basis — has seemingly been decided with Granit Xhaka now set to remain. Albert Sambi Lokonga looks promising, calm and intelligent on the ball, and is, I think, more ready for regular football than many seem to have imagined. He may be more of a Partey alternative, with his similarly long legs and eye for a line-breaking pass, than a potential partner, but at just 21 he can still be moulded into something slightly different.

The other, much less asked question but the biggest in my mind, is who will play on the left for Arsenal on a regular basis? It’s no secret that the team’s biggest issue was creating chances last season and that that improved when Bukayo Saka and Emile Smith Rowe featured regularly. Either Saka or Nicolas Pepe will play on the right and Smith Rowe, as things stand, will start centrally. All three of those players are options on the left, as are Pierre-Emerick Aubameyang and Gabriel Martinelli, though the pair are both more ‘forwards’ than they are ‘midfielders’.

Playing Aubameyang on that flank is, as far as I’m concerned, no longer a defensible decision. Now 32, there are limited yards left in his legs. Martinelli adds a factor of chaos and unpredictability, a player reminiscent of a wind-up toy. Just watch him go. But the Brazilian is still more of a forward than a creative player, more likely to force his way into chances and pounce on bobbles than link up with his team-mates.

This could be what Arsenal need in some situations but it was a lack of combinations that really hurt the team in the final third last season. An Arsenal that couldn’t combine last season was an Arsenal that resorted to crossing the ball more and picking up fewer points. The real standout period when it came to crossing was also the team’s most barren run in the league. 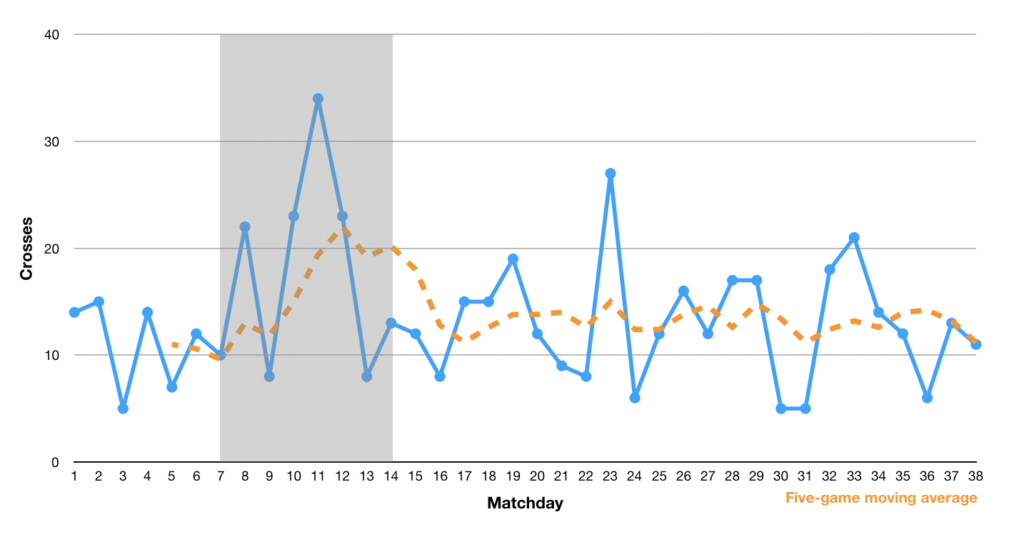 The links with another attacking midfielder who is capable of combining well with others make sense as they would allow Emile Smith Rowe to reprise his ‘wide creator’ role from the left. Perhaps his performance of 2020/21 came from that flank against Tottenham in what was also one of the team’s best displays of the campaign. He is more than capable of making that role his own should Martin Odegaard return or someone like James Maddison arrive.

Arsenal need more players like that who naturally link up with each other, setting and then  changing the pace of the game with movement of the ball and shorter, sharper passing. It’s the type of play Smith Rowe and Saka are well suited to but Aubameyang is not. Nor is Joe Willock, a player more built to get on the end of moves rather than help constructing them, making his departure to Newcastle more palatable as long as it does help lead to Arsenal bringing someone else in.

For now, there are more questions than answers. More business to do – for the first XI, at least – than business completed. And a lot of weight on some very young shoulders, some from Hale End and some forged elsewhere and brought in more recently, if Arsenal are going to make big improvements on back-to-back seasons of disappointment.