With Matteo Guendouzi leaving for Marseille and the futures of Granit Xhaka, Lucas Torreira, Joe Willock, Ainsley Maitland-Niles and Mohamed Elneny uncertain – Arsenal had to refresh their midfield options this summer.

Before making a much-needed marquee signing in that area, the club have secured a deal for Anderlecht midfielder Albert Sambi Lokonga. But who is the Belgian, what will he bring to Arsenal and why is he costing €17.5 million?

Anderlecht are – by some distance – the most successful club in Belgium ahead of Les Trois Grands rivals Club Brugge and Standard Liège. But their recent struggles have been awfully timed, matching significant debt with falling out of European football and COVID-19 hitting their finances. A major rebuild has since commenced with changes at boardroom level, senior players leaving and with prodigal son Vincent Kompany returning as head coach – a newfound faith in youth.

And central to that rebuild has been Albert Sambi Lokonga who found himself donning the captain’s armband at 21 years of age, having led the entire Anderlecht squad for minutes played last season. The midfielder is no stranger to senior football after making his initial breakthrough in 2018/19 before a serious knee injury curtailed his progress – keeping him sidelined for seven months. But he returned stronger and quickly established himself as un-droppable for the Brussels-based side.

What instantly stands out about Lokonga is his tailor-made suitability for modern football. He boasts mobility and athleticism to compete in central areas, with technical quality and bravery to facilitate ball progression. Under Kompany, Anderlecht often deploy a 4-3-3 formation which involves the midfielder dropping deep and dictating play, having previously been the more ‘attack minded’ member of the pivot (alongside a more defensive option).

Traditionally, deep-lying midfielders are usually one of two types: destroyer or tempo setter. Lokonga is the undoubtedly latter and what will be music to Arsenal fans’ ears is his capacity to progress the ball. Compared to other Pro League midfielders last season, the 21-year-old sat in the 93rd percentile for accurate passes into the final third and progressive passes (Wyscout data) and the 94th percentile for accurate through passes – defined by Opta as ‘passing between lines to find teammates’. 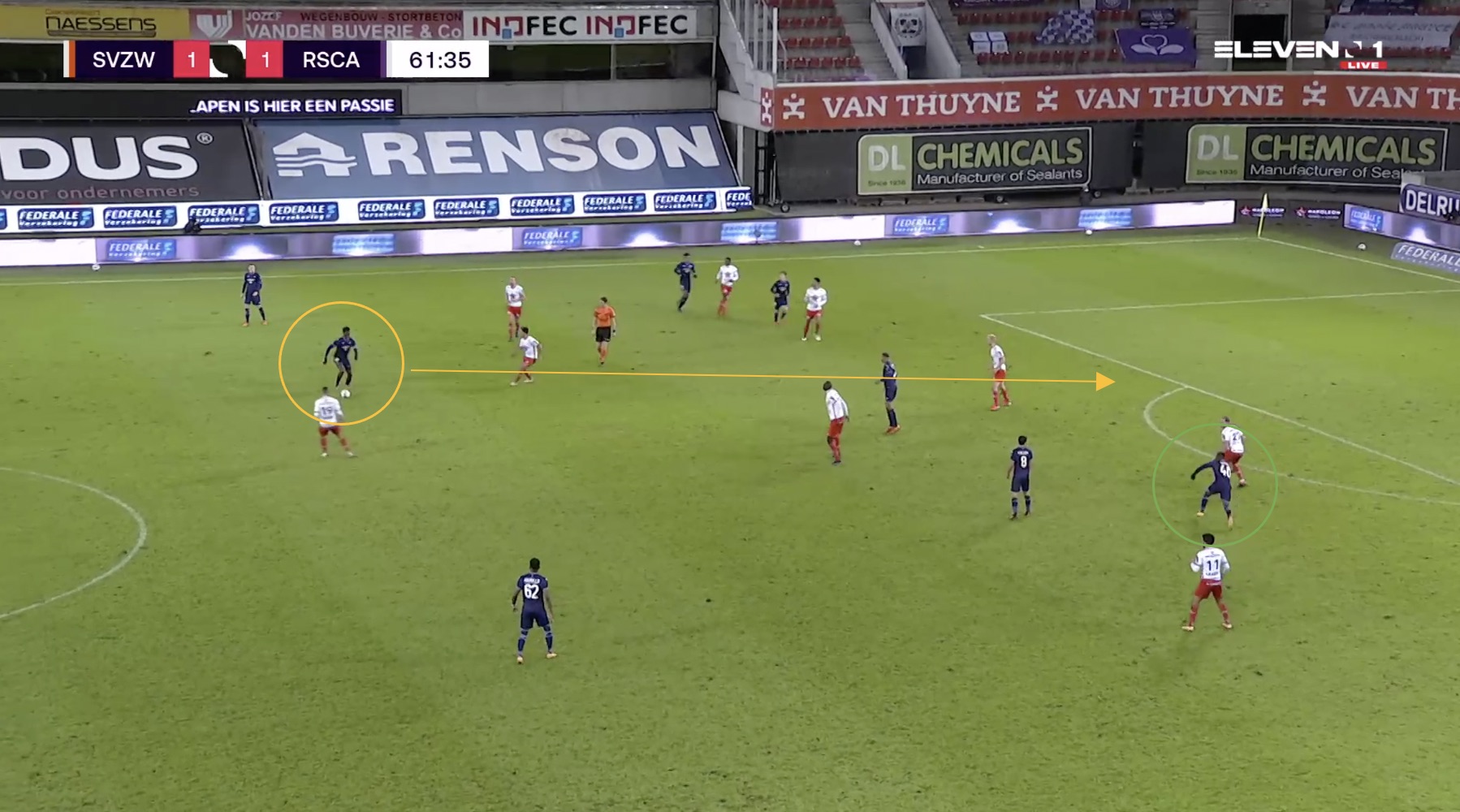 During their dismal run of form between October and Boxing Day last season, the Gunners struggled to build from deep with Thomas Partey injured and Granit Xhaka largely ineffective. But Lokonga can provide some much-needed tonic for that issue – his primary thought is to always pass forward. When opportunities present themselves (on either foot) he prefers the ambitious passes that hold greater risk, but greater reward should he break deep defensive lines. His pass selection is intelligent, his technique is clean and his proactivity injects speed into Anderlecht’s play.

Not only is the Belgian an impressive distributor, but an ambitious ball carrier as well, which is again backed up by data – sitting in the 92nd percentile for successful dribbles and the 93rd percentile for progressive runs per 90 (among Pro League midfielders). What becomes clear when watching Lokonga is his willingness to receive the ball in any situation, and despite his tall frame, shows great agility in spinning markers with body feints or shoulder drops. He is wonderfully agile and constant scanning – an extremely valuable skill in midfielders – allows him to photograph the pitch mentally, which naturally aids his smooth movement and timing. 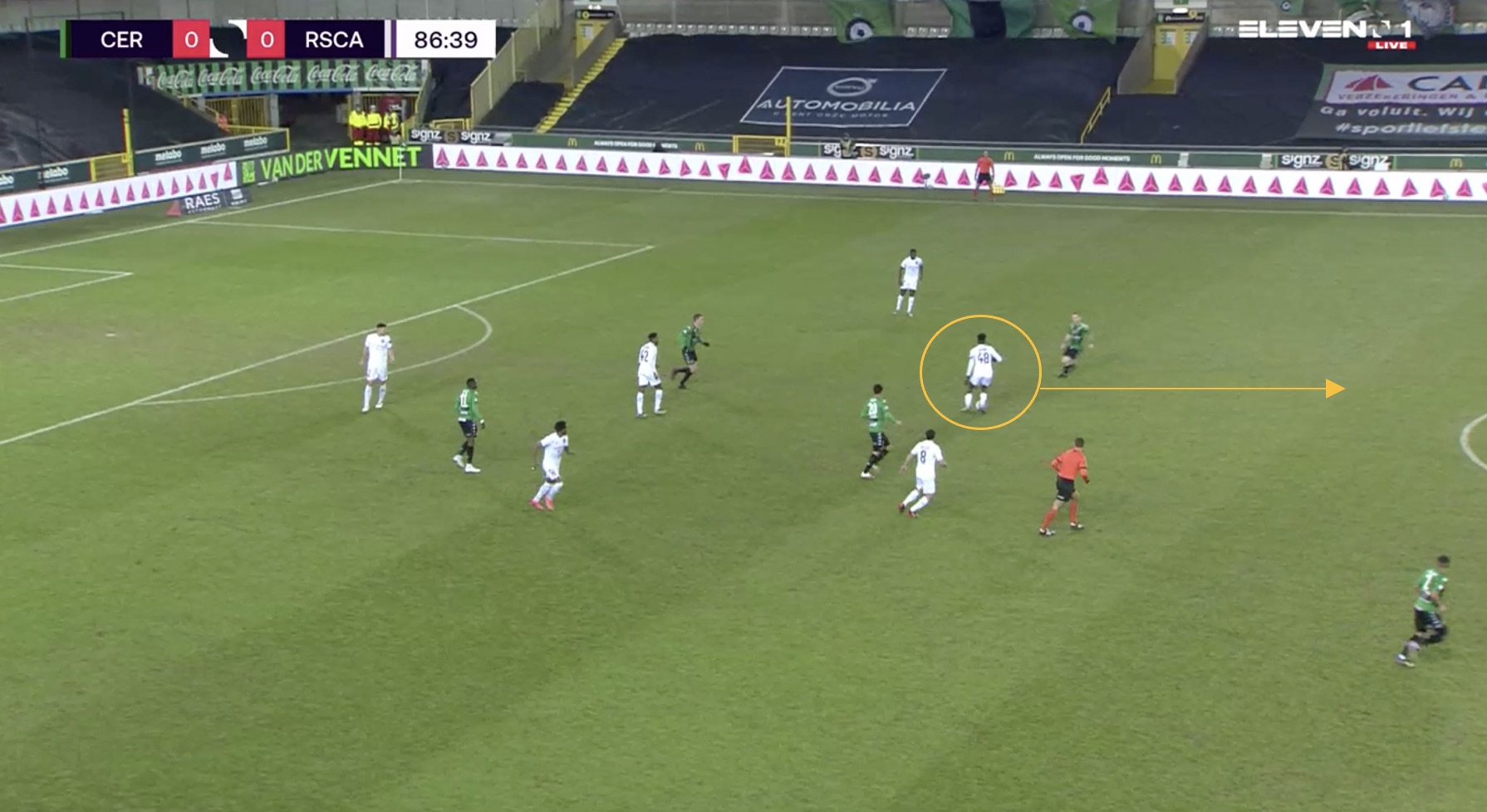 However, there is work to be done defensively. Lokonga is energetic and dynamic, making him useful in pressing situations and his ability to cut passing lanes stands out; the 21-year-old averaged 2 interceptions per 90 in the Pro League last season – leaving him in the 89th percentile among midfielders which is encouraging and surprising for a possession-based side.

But the Belgian will have to hone his frantic puppy energy in English football. His eagerness to win back possession results in him gambling – either in challenges or based on where the ball could drop – which can be costly as the deepest midfielder. His technique in duels could also improve, as he approaches 1v1 situations at break-neck speed and without balance, leaving little room for readjustment. Sambi is also guilty of holding onto the ball too long at times.

“When you look at his age and quality, he definitely stands out for me,” Kompany explained when asked about Lokonga in February.

“We are very demanding of young players but Sambi loves to take responsibility, and this is why we trust him with such an important role as captain.”

This natural blend of leadership and ability offers insight into why Lokonga is such a coveted prospect. The midfielder welcomed greater responsibility at Anderlecht and grew with the armband, before his performances were rewarded with a senior Belgium call-up in March. Roberto Martínez even included him in his provisional 26-man squad for the European Championship after impressing in training – although he failed to make the final cut.

Today, one of the biggest talents in @ProLeagueBE –

Elite Ball progressor – one of the few who can progress ball via pass & carry both!

Due to playing in various positions for his boyhood club, some Arsenal fans have taken issue with his versatility, unsure of whether he arrives in the Xhaka mould, Partey mould or ready to fill the absence left by Dani Ceballos. His rounded skillset will have undoubtedly appealed to Mikel Arteta and the Arsenal hierarchy but his best position is arguably with freedom as a number eight; where he can link play, facilitate, move the ball and progress the ball. He looked entirely comfortable in a deeper role for Anderlecht but playing this role in England, as opposed to Belgium, will present different challenges and place unnecessary weight on his shoulders. The jump from Pro League to Premier League football could resemble advanced origami having just mastered the paper aeroplane.

Lokonga – much like the signing of Nuno Tavares – will not come in and be expected to change Arsenal single-handedly. But what he will do is increase the floor of this squad, provide depth and considerable excitement for the future.

There is a justified feeling of mistrust towards the club hierarchy from Arsenal fans, but this signing hints to intelligent scouting and sensible squad planning. Lokonga is one of the most coveted young midfielders in Europe who certainly has the raw ingredients to thrive in North London.