Following the departure of David Luiz and with William Saliba spending yet more time away from North London – Arsenal had to strengthen their central defensive options this summer.

After failed pursuits of Jules Koundé and Edmond Tapsoba, the club eventually secured a deal for Brighton defender Ben White. But who is the Englishman, what will he bring to Arsenal, and why is he costing £50 million?

Born in the large, coastal town of Poole, White suffered serious autoimmune issues from a young age and in between long spells at the hospital, took antibiotics every day until the age of eight. However, his condition improved after being encouraged by doctors to keep active and despite playing several sports, eventually settled on football when Southampton invited him to their youth set-up. He spent eight years with the Saints before being released at the age of 16, eventually joining Brighton where his ascent through the English football pyramid began.

The defender spent time with Newport County in League Two, Peterborough United in League One, and Leeds United in the Championship, where his stock rose in their title winning season under Marcelo Bielsa. It became clear that White was worlds away from the traditional rough and tumble centre back, tasked with building The Whites’ attack with raking diagonals and confident forays forward. He was also an ever-present for Brighton last season – with more Premier League minutes (3,004) than any other player – before impressing Gareth Southgate enough to earn a shock inclusion for his final Euro 2020 squad.

Unusually for a defender, what makes White such an interesting prospect are his on-the-ball qualities. Playing primarily as a right centre-back for Brighton, the 23-year-old was tasked with progressing the ball either through his distribution or forward carries. Having played at right back and in midfield throughout his career, White boasts impressive technical security and looks effortless when breezing past players in the middle third. As per FBref, compared to other centre backs across the top five European leagues, his 0.78 dribbles completed per 90 leave him in the 93rd percentile, while his 0.55 progressive passes per 90 place him in the 89th percentile – clear of any other Arsenal defender last term.

Alongside his ability to play through the lines, White is an accomplished long range passer and will often play raking diagonals or clip balls in behind. This was much more evident at Leeds than Brighton but being able to mirror those David Luiz-esque qualities will have pricked the ears of Mikel Arteta. Arsenal likely identified the defender as somebody who can replicate that type of distribution, but also identify and attack space, which in-turn unsettles deep blocks and frees up space for others. During his time at Elland Road, White ranked second in the Championship for progressive carries into the opposition half (88) and third for direct carries from goal kicks (31). 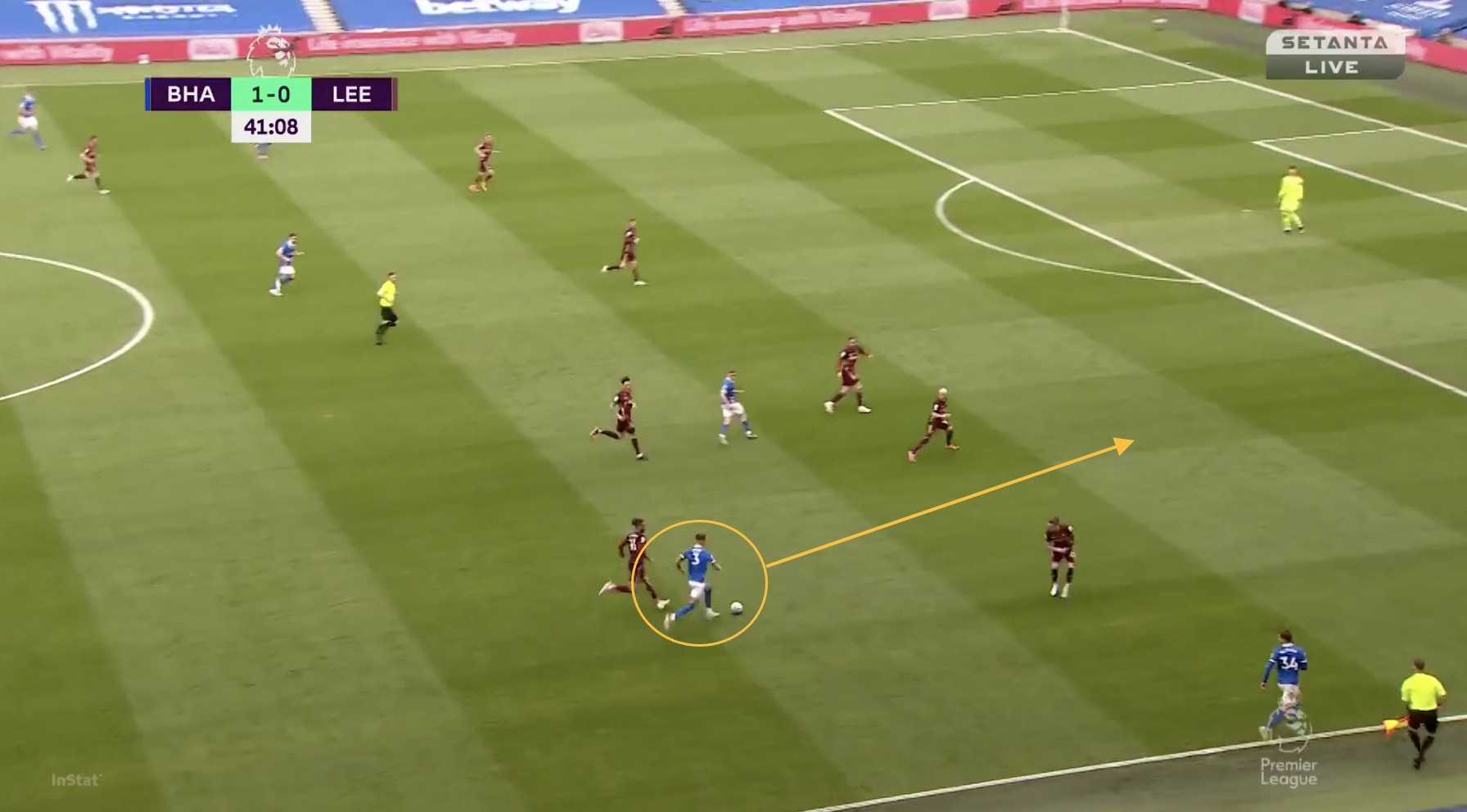 Where he does differ from the Brazilian, is how he engages the opposition defensively. The 23-year-old embraces contact and will often stay touch tight to forwards, as opposed to Luiz who would retreat due to his lack of pace. White backs himself physically and likes to nick the ball with an outstretched leg or slide tackle, but can also match players for pace should he need to cover ground.

The defender averaged 1.9 tackles per 90 last term, more than any other Brighton teammate and his Arsenal counterparts, sitting 10th overall in the Premier League. However, he will have to curb his habit of diving in and going to ground too easily, which could prove costly with Arsenal playing a higher line. An improved sense of timing will hopefully arrive with further experience.

Another area of concern is his aerial ability. The 23-year-old is not the tallest defender around (standing at 6ft) but his 1.4 aerials won per 90 was dwarfed by every other Arsenal teammate last season. It’s worth noting that in a back three responsibilities are shared, with Lewis Dunk and Adam Webster far more accomplished in that sense. But playing in a back four at Emirates Stadium places further weight on his shoulders and with their mixed set- piece record during pre-season, this should be worth noting. 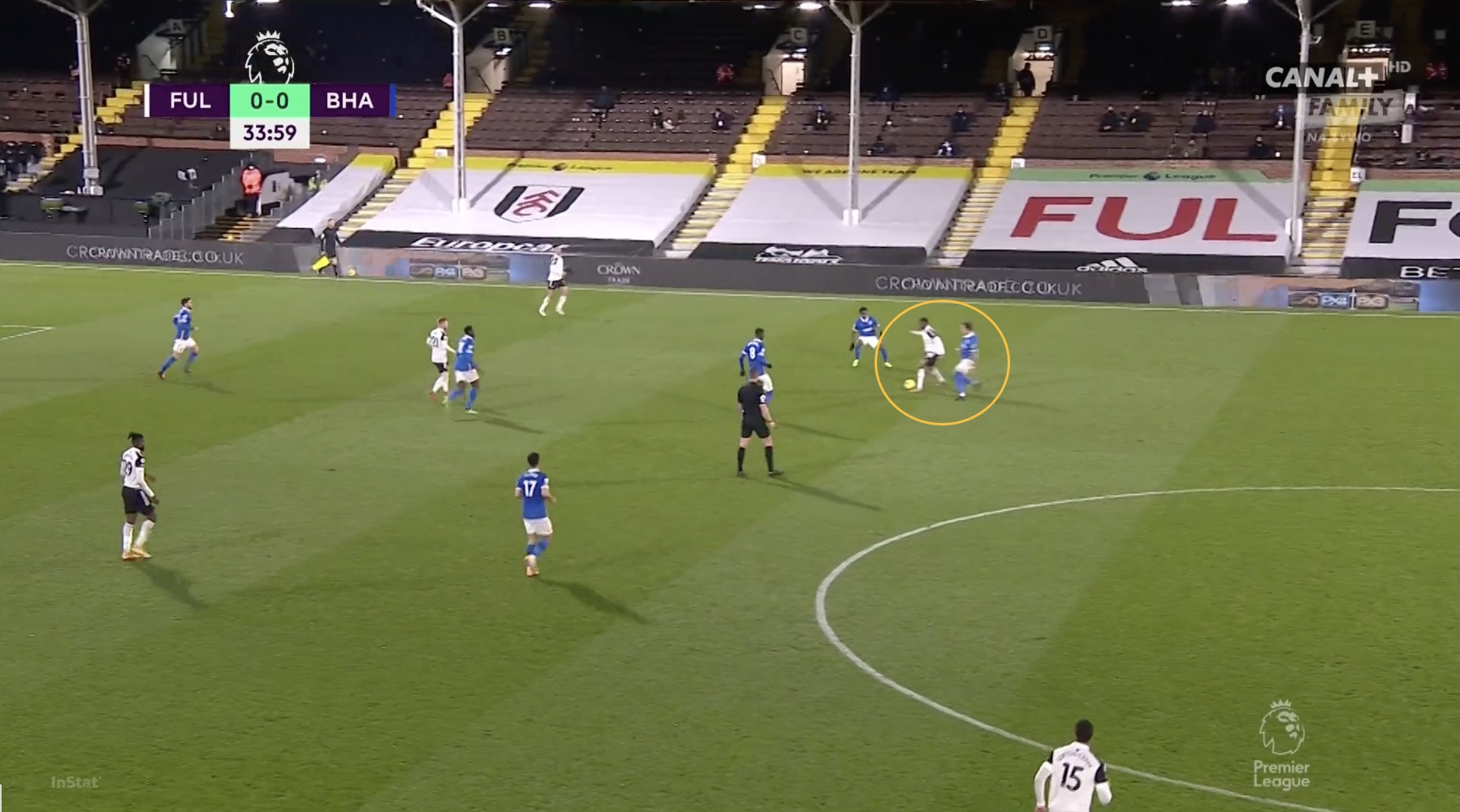 “I’m really happy with Ben and his development,” Graham Potter beamed when asked about the defender in January.

“He’s come back from Leeds and been brilliant, and we’re probably looking at the next young English defender to break through.”

Ultimately, this transfer will be viewed through many different angles. In the red corner, fans are excited at the arrival of a young, exciting defender whose progressive qualities can help Arsenal smooth their play from deep. In the blue corner, some are understandably baffled by his price tag and view this signing as a misuse of funds with more pressing issues at hand. Those in the middle are stepping back and waiting to see what happens.

But while concerns about his price feel justified, dig a bit deeper and this is simply the norm for young, homegrown talent – particularly defenders. Manchester United signed Aaron Wan-Bissaka for £50m, Chelsea signed Ben Chilwell for £50m and Manchester City signed John Stones for £50m. There will always be a premium to pay and if the club believe in White, they could potentially have their right-sided centre back for the next six or seven years. Technically and stylistically he certainly ticks the boxes.

👊 Get yourself a defender who can do both. Ben White is just that. #LUFC #EFLWonderkids pic.twitter.com/BZBky0L1n2

It’s also worth noting that the defender has ‘done his time’ in different footballing conditions. His boyish, Love Island charm does him a disservice – he has played against men on difficult pitches, in physical leagues and across a multitude of levels. White certainly has the steel to match his more modern qualities.

Joining a club like Arsenal (as their third-most expensive transfer in history) puts you under the microscope. But White ticks boxes both on a traditional and more analytical level, he follows the current recruitment plan of signing exciting, young players and offers the side variety in how they want to play. He will need time to settle and growing pains are expected, but the defender has some promising core attributes that can hopefully buck the trend of some miserable recent talent ID.