“We are really happy for what happened in the last four or five days, to beat probably the best two teams in Europe is not an easy thing to do. A lot of credit goes to the players for what they are doing and the performances and the level of fight and decision-making they are showing on the pitch.”

Fight and decision making were crucial on, they always will be, but there was a hell of a lot more than that behind the win.

Arsenal lined up with a few changes from the side that beat Liverpool on Wednesday, with the inclusion of Ainsley Maitland-Niles the only real surprise. His place in the starting XI led to discussion over whether it would be a back four or a back five. It was the latter, as it has been in recent weeks. Man City were expected to be in a 4-3-3 shape but surprised Arsenal early on by using Kevin De Bruyne deeper than expected, alongside Ilkay Gundogan to form a 4-2-3-1. 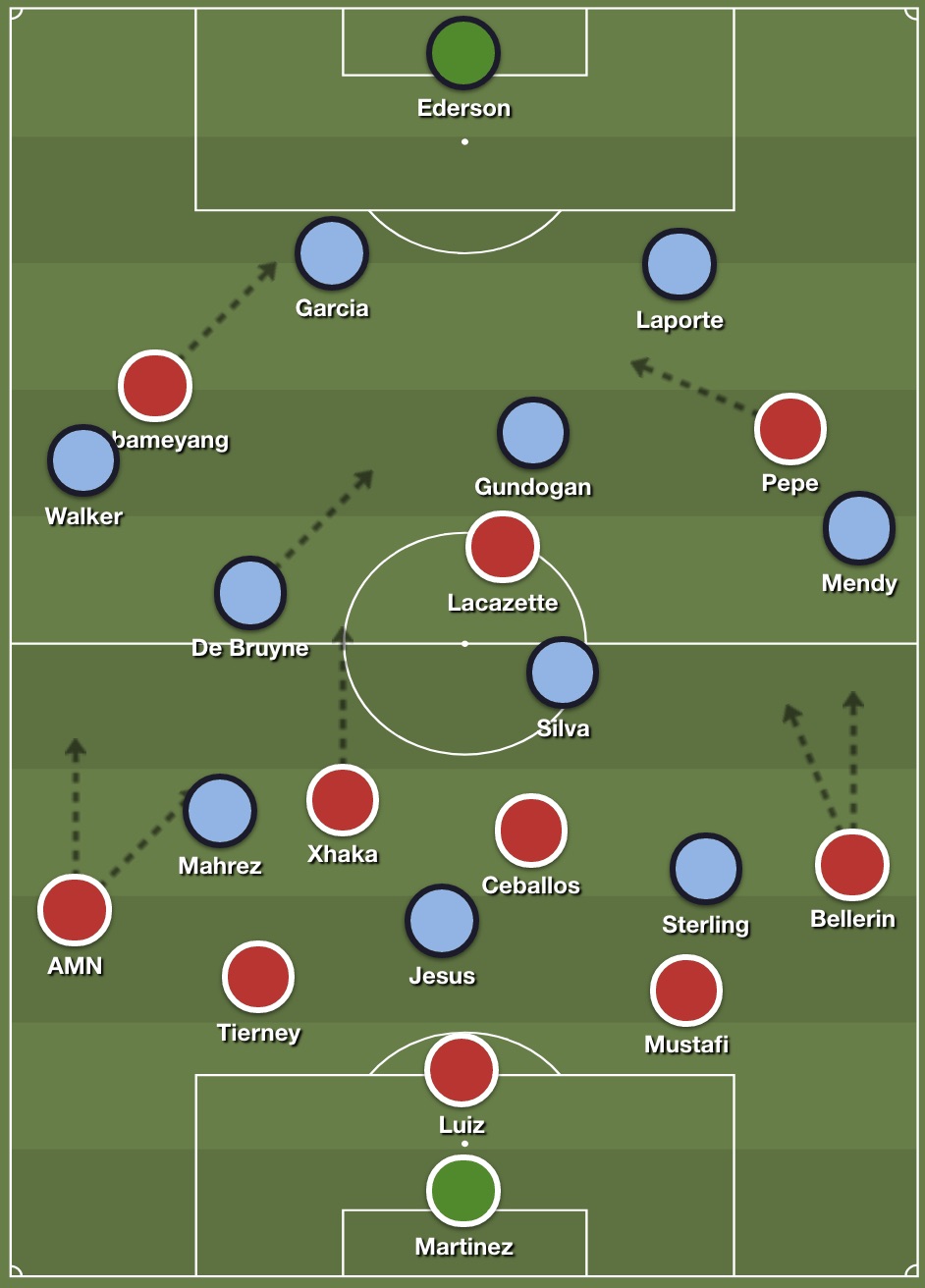 De Bruyne’s deep positioning early on caused Arsenal problems and helped City dictate the opening stages. It looked like it could be a long evening, with City dominating possession and asking questions early on.

It was clear Alexandre Lacazette had been tasked with shutting down Gundogan, expected to play as a lone deep midfielder, but De Bruyne’s positioning helped make City hard to press and gave them control of the ball. 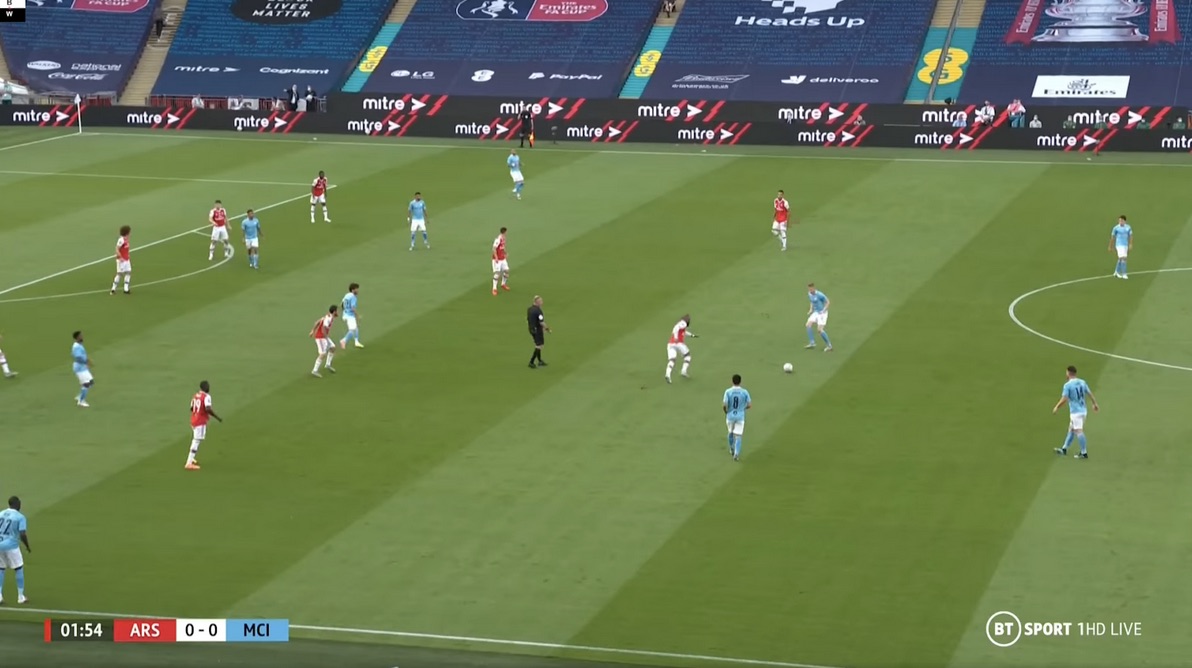 We’ve seen it all before; Arsenal teams of yesteryear would have dropped back and tried to hold on for as long as possible. This Arsenal didn’t, and they swung the impetus by pushing Granit Xhaka further upfield.

The Swiss moved higher and higher, blocking off De Bruyne as an extra out ball, matching City deep in their own half, not allowing them to outnumber the Arsenal press. If they let them do that, they slice right through you. Xhaka moving further upfield could’ve created other issues too, with the space in behind him, but having a third centre-back allowed an Arsenal defender to push on aggressively too. When City were forced to play the ball long, they were outnumbered when it arrived. 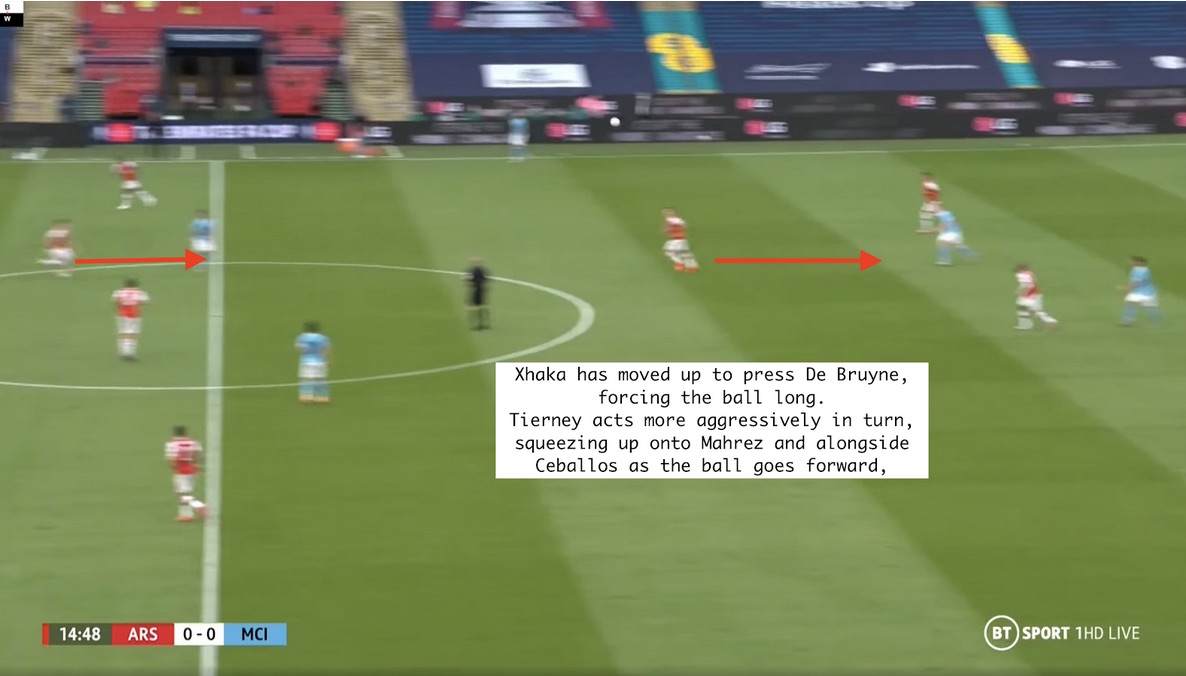 Once Arsenal got to grips with City’s shape, the pressing was excellent. Lacazette stuck to Gundogan, Aubameyang and Pepe threatened passes to the centre-backs and used their cover shadows to block off long balls to the full-backs. As City struggled to progress the ball, David Silva dropped deeper, but Ceballos went with him too. With a three-man backline behind them, there wasn’t the sort of fear about pressing high in numbers as there can be with a 4-3-3 or 4-2-3-1 formation.

Bellerin or Maitland-Niles would also operate aggressively, alternating depending which side of the pitch the ball was on, leaving a quasi-back four as the back five pendulated from one side to the other. In the example below, Laporte plays the ball long and David Luiz wins it before putting Aubameyang through on goal. It wasn’t the only time Arsenal’s high press almost led to a goal. Again, Lacazette stuck to Gundogan and De Bruyne looked to exploit that by dropping much deeper than his midfield partner, but Xhaka went with him and stole the ball. Aubameyang’s pass was poor and a chance never materialised. Pressing high, effectively, and winning the ball back leaves you almost no work to do. It leaves you close to goal, with the defence disorganised. If Arsenal can start doing this regularly, it’ll create chances against any side.

But the pressing was just one component of the win. Patient possession play from the back was also huge. The approach is one of risk and reward, we know that already, and we got away with one when Sterling tackled Mustafi inside our own box. Plenty of people would like to see Arsenal kick it long in those situations, but if we did we never would’ve scored the opening goal.

In last week’s north London derby defeat, our inability to create stemmed from not being able to provoke Tottenham from leaving their positions to win the ball. It was different here, with City always wanting to play aggressively.

To play through that requires a cool head, excellent positioning to provide options for the man on the ball, good decision making, and technical quality. Arsenal displayed the lot. There were a couple of chances early on where we broke free – Pepe misplaced a tough long ball for Aubameyang in one case (around 11:20), AMN lost the ball after another good build-up to escape pressure from inside our own box (14:20) and it didn’t take much longer for it to pay off.

Pass after pass after pass…@Arsenal's first goal was a mesmerising display of the beautiful game ?#EmiratesFACup pic.twitter.com/RtvfJrg6ni

Another feature of our attacking play was the positioning of the fullbacks. I’ve talked in this column before about Arteta’s Arsenal always having a ‘front five’ when attacking, covering the width of the pitch. But at Wembley there was a lot more variance to it, with AMN and Bellerin both comfortable moving inside. Bellerin tucked inside for the goal, stopping Gundogan from doubling up on Pepe. And that wasn’t the only occasion. 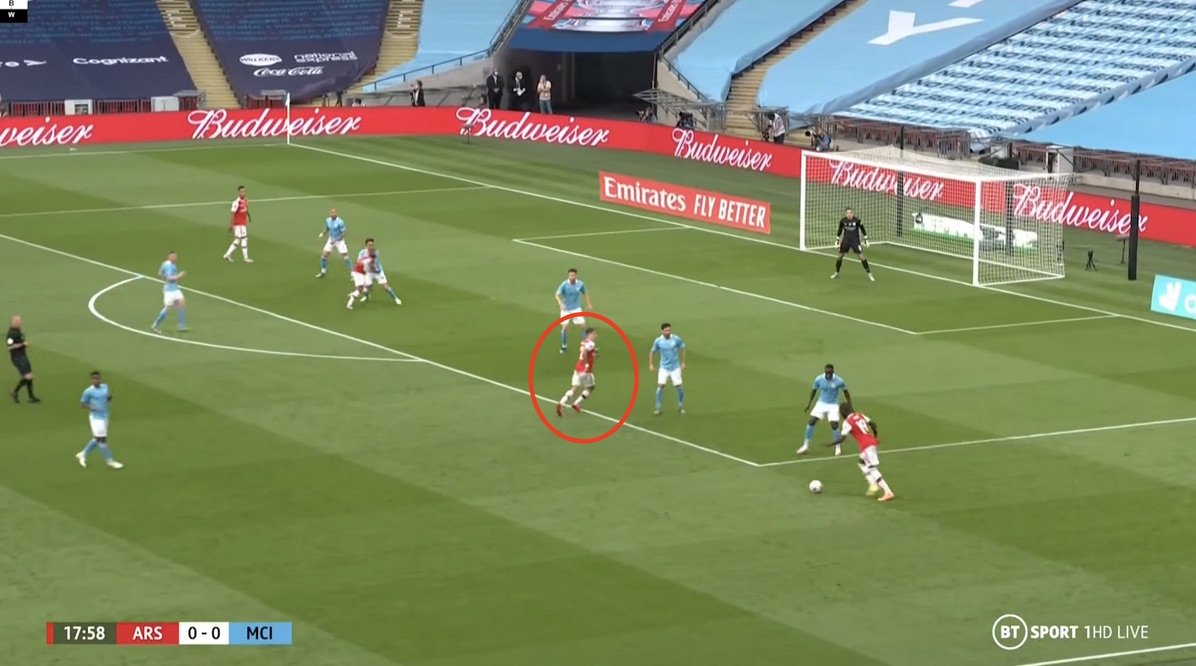 The movements felt natural, posed City defenders questions, and made Arsenal less predictable. In the example below, Mendy is in two minds over whether to cover Pepe and tuck in closer to Gundogan or mark the wide option, Bellerin, on the flank. On the other side of the pitch, Aubameyang holds the width while AMN tucks in, leaving Kyle Walker outnumbered and City stretched if the ball moves to that side of the pitch. 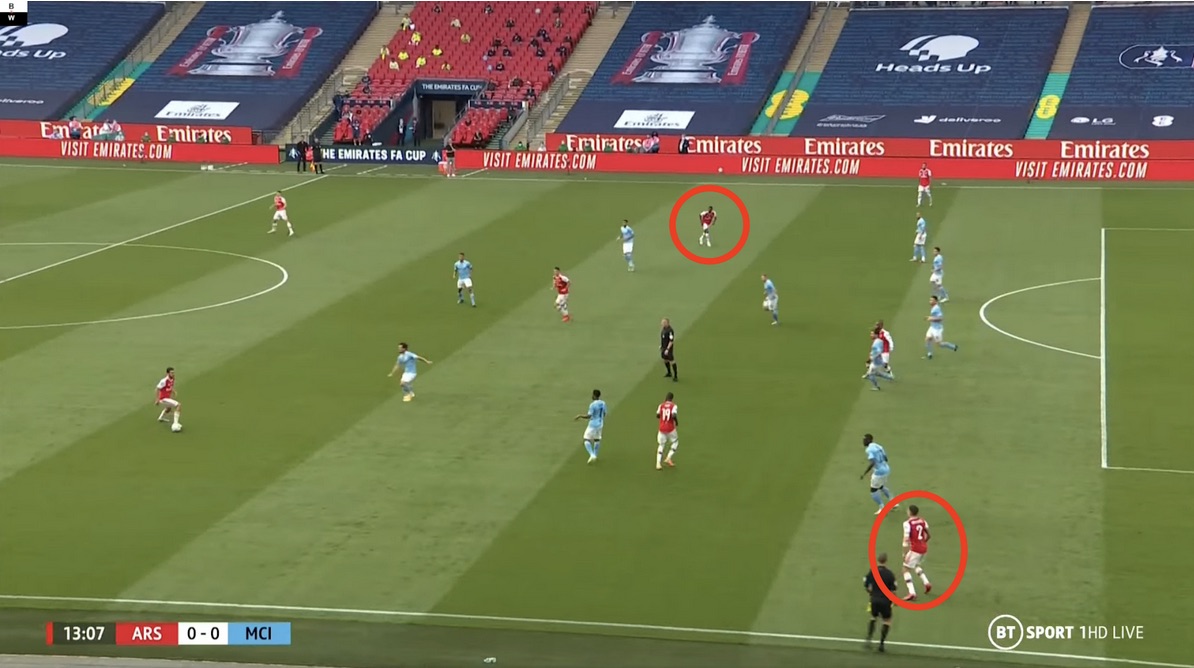 On other occasions, both wing-backs were wide. We’ve seen this plenty of times since Areta took over, that front five with someone always in place to retain shape, but not with this level of variance. 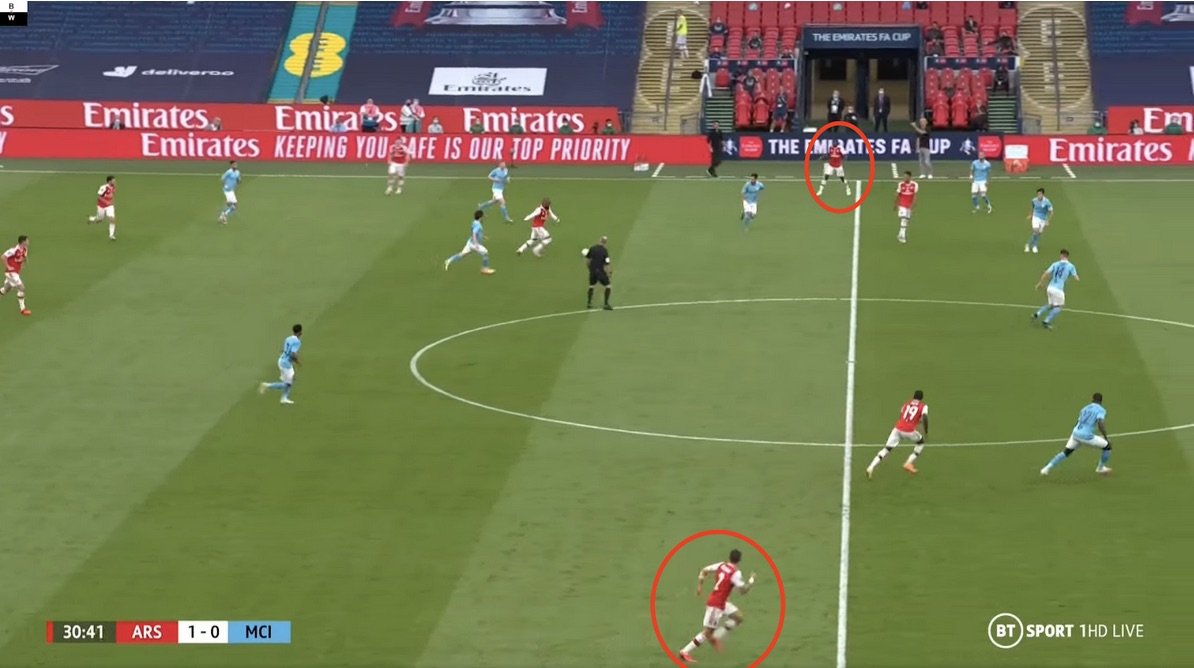 The first half was, truly, a brilliant well-rounded performance. The second was more challenging. 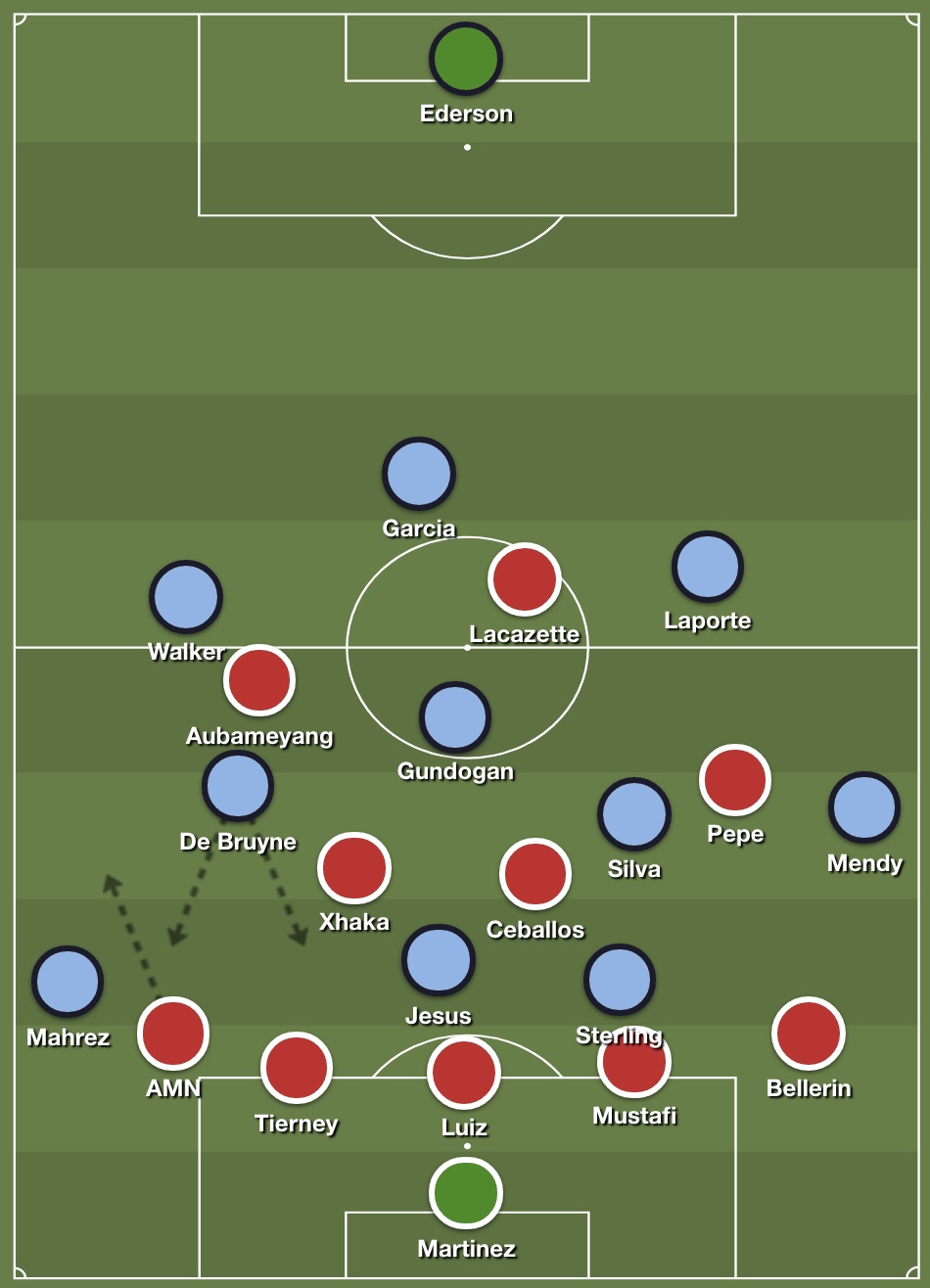 Man City made an important switch after the break, shifting to a back three in possession with Gundogan just ahead of them. Kyle Walker acted as the third defender, while Benjamin Mendy provided width and depth on the left. The shape made the Arsenal press redundant.

Aubameyang and Pepe stayed with the nominal ‘fullbacks’ but the asymmetry of their roles meant Arsenal were outnumbered as City played with the ball from the back. With Aubameyang orientated to Walker’s positioning, De Bruyne was released to find space in an advanced role to the right and he had a much bigger impact on the game as a result. 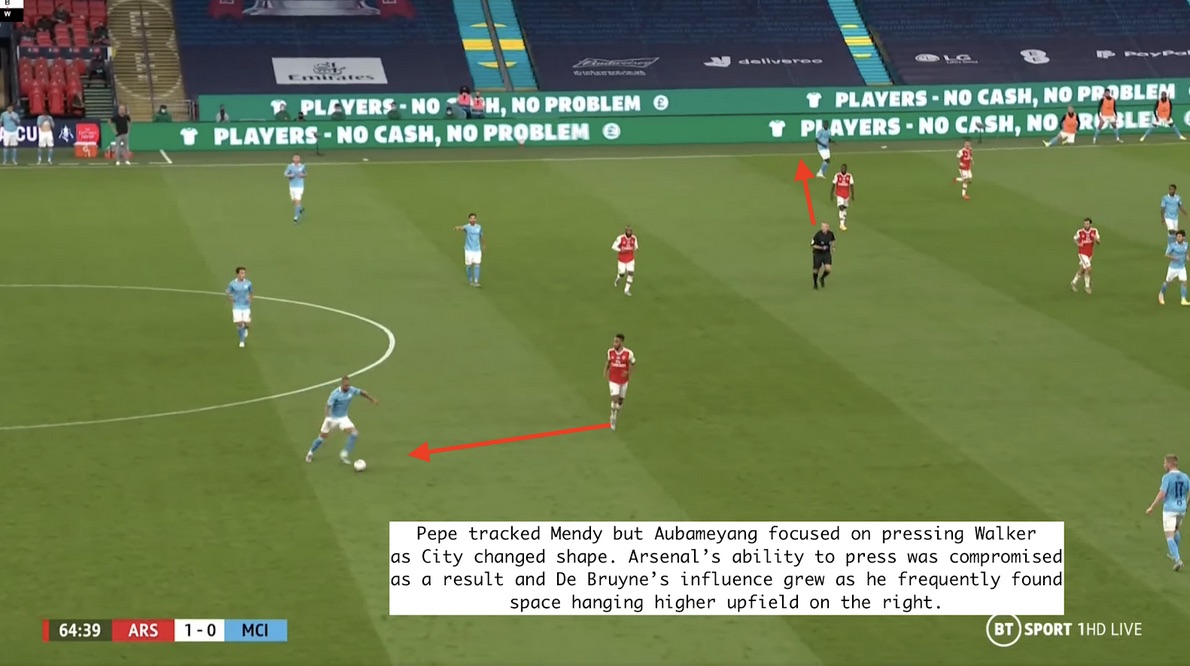 Walker’s role also led to positives for Arsenal, though. While it meant City had better coverage on the break, it also meant he was playing much more narrow. It was no accident that the Gunners then looked dangerous down that side of the pitch – in the opening 15 minutes of the half, Aubameyang and Maitland Niles combined to threaten down that wing on three occasions, only for the final ball to let them down.

Defending deep, Arsenal kept spaces to a minimum, causing problems for even the most technical of players. The second goal came at a perfect time, with Arsenal clearly tiring, but the team defended superbly with their backs to the wall and, despite all their possession, City barely created a clear goalscoring opportunity. The first half was excellent and gave us the platform to win, the second was a solid, gritty, mature showing to get the win over the line.

A good game-plan and a bit of luck are both necessary not always enough to beat a team as good as this Manchester City side. You need a bit of luck, you need to take your chances, and you need a lot of players to have a good day. With all that, Mikel Arteta earned the opportunity to lead his Arsenal side out at an FA Cup final just seven months and 28 games into the job.