“Maybe one thing that I’ve picked up straight away is that when nobody’s pressing you, you don’t need to pass the ball. What you can do is just get the ball, drive the ball forward a bit and wait for someone to come to you, commit a player, then pass it. Then that man will be free or that man will have less pressure on him. It’s just attracting players before you pass the ball off, which will help our team-mates a lot on the pitch.” – Bukayo Saka on what Mikel Arteta wants from his players.

But what happens when the opponent never commits themselves to winning the ball?

Against Wolves, Arsenal struggled to progress the ball as Wolves wouldn’t press high. It was hard to commit those bodies. But the Gunners went wide as a result, with Wolves outnumbering us in the middle of the park.

We encountered similar issues against Spurs, but they played with a narrow four-man midfield in a 4-4-2 shape. The back three is where Arsenal had a numerical advantage and Mourinho played it perfectly against a conservative Arsenal side crying out for creativity. 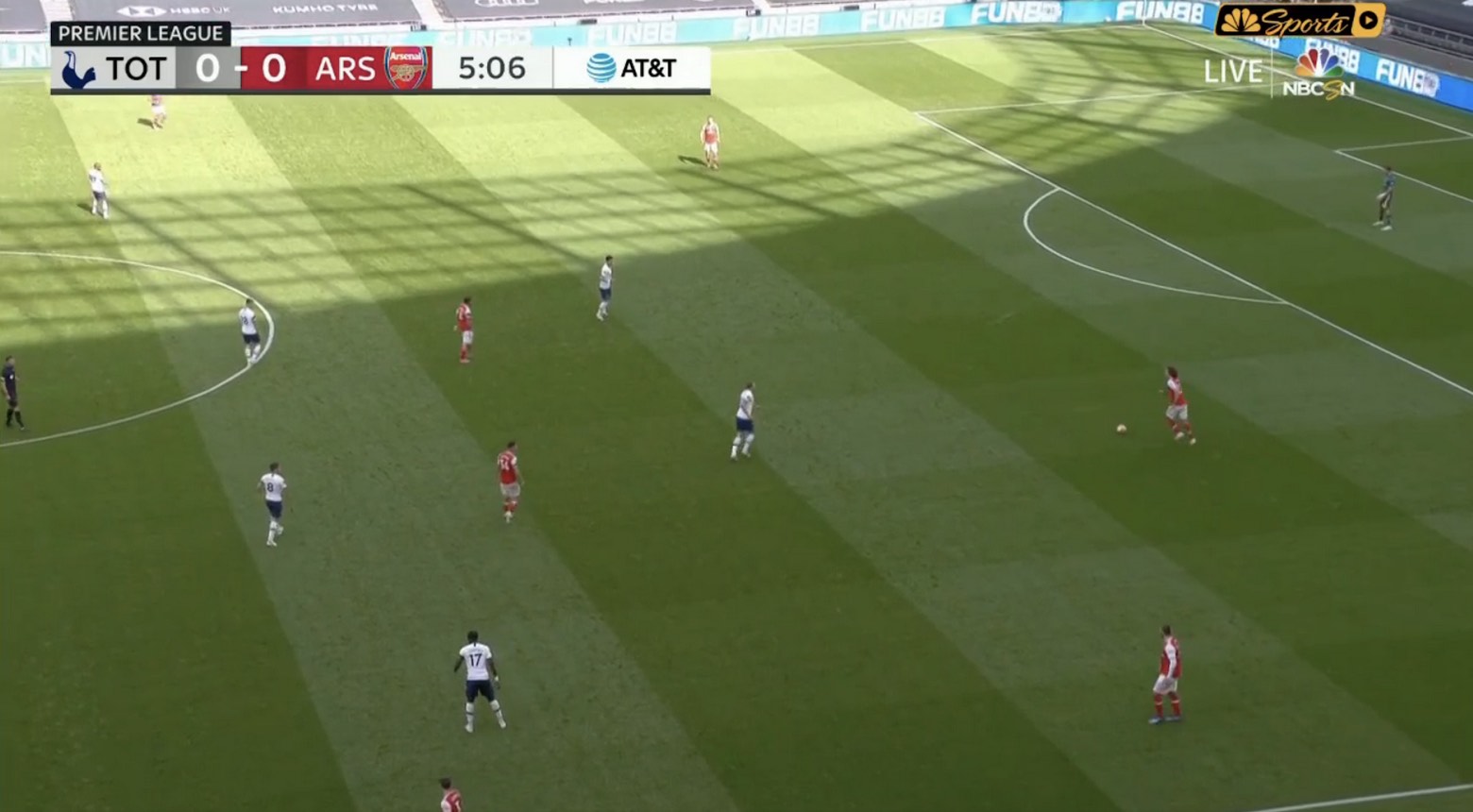 From the very beginning, Spurs looked to stop the ball going into the centre of the park. Kane and Son were happy to watch Arsenal’s defenders play the ball to each other slowly, blocking off a route into the midfield pair of Granit Xhaka and Dani Ceballos. When the ball did reach either of those two, they were immediately pressed by Lo Celso or Winks behind them, forcing possession backwards or sideways. With just two men in the Arsenal midfield, Mourinho could afford to match them up instead of lining up with three himself. The Spurs coach is, after all, about stopping the opposition from doing their thing. Arsenal’s slightly surprising lack of flexibility played into his hands.

This was clearer than ever for a 90-second spell from around 25:30-27:00. Only Arsenal touched the ball, but Tottenham were in complete control. Possession moved around the back three, and Emi Martinez, with Arsenal looking for a way forward. Kane and Son shifted across, happy to block off a ball into midfield and waiting for a grievous error like the one that saw them score the equaliser. Arsenal had the numerical advantage but it was useless. A pass into midfield would immediately be pressed from behind by Winks or Lo Celso, forcing possession back to the defenders over and over again. 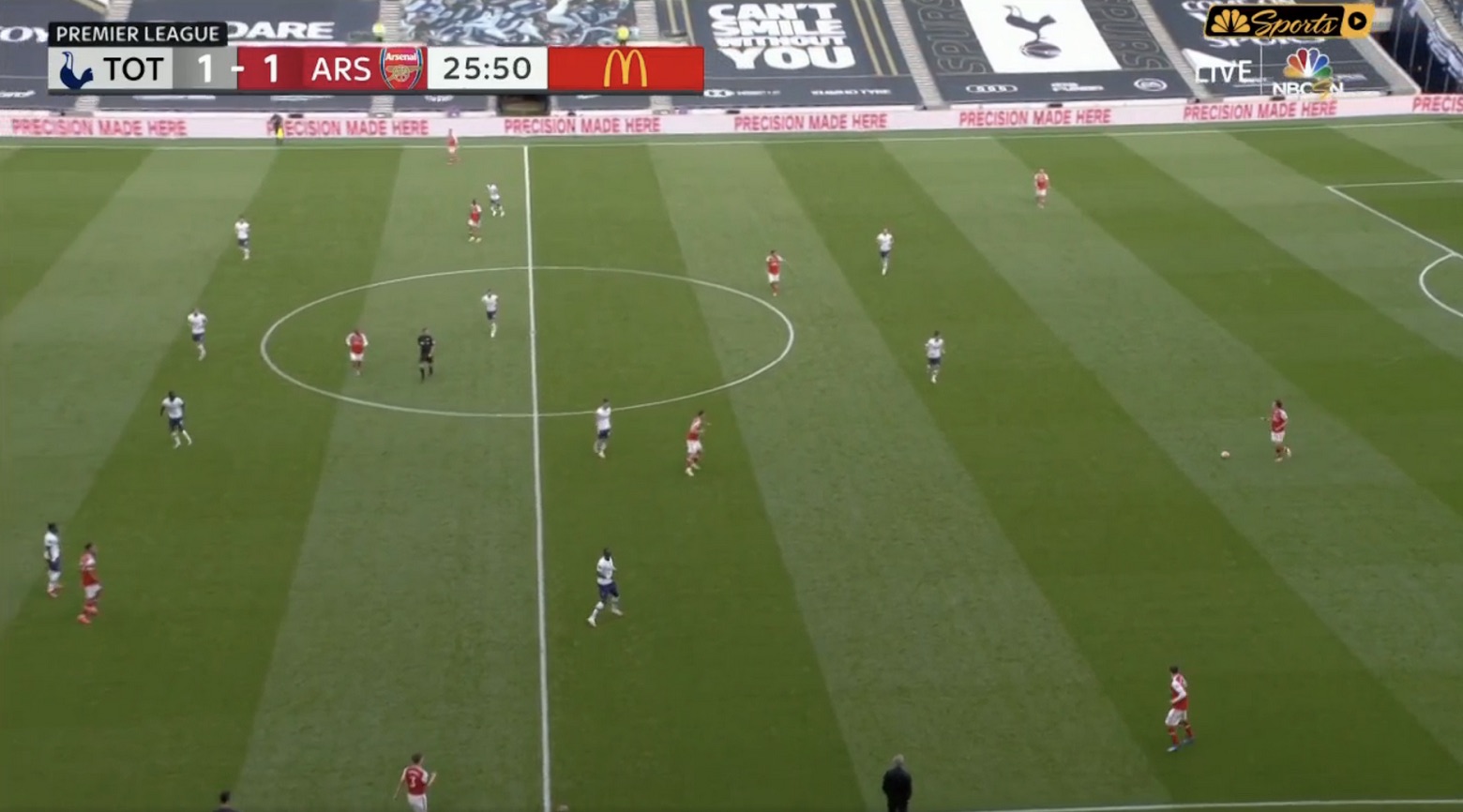 If Arsenal are under instruction to wait for an opposition player to commit themselves, what do they do when it never happens?

Eventually, Dani Ceballos dropped deeper and joined in. But leaving a hole in midfield, he had nobody to pass to. The players clearly had different ideas on how to progress. See below, where Mustafi is desperate for Lacazette to show for the ball but the striker doesn’t want to drop so deep; after all, what’s the point of progressing play if it just leaves Arsenal hugely outnumbered when they get upfield anyway? Dani Ceballos, meanwhile, is telling Mustafi to just pass it backwards again. Stay patient. Wait for the opening. 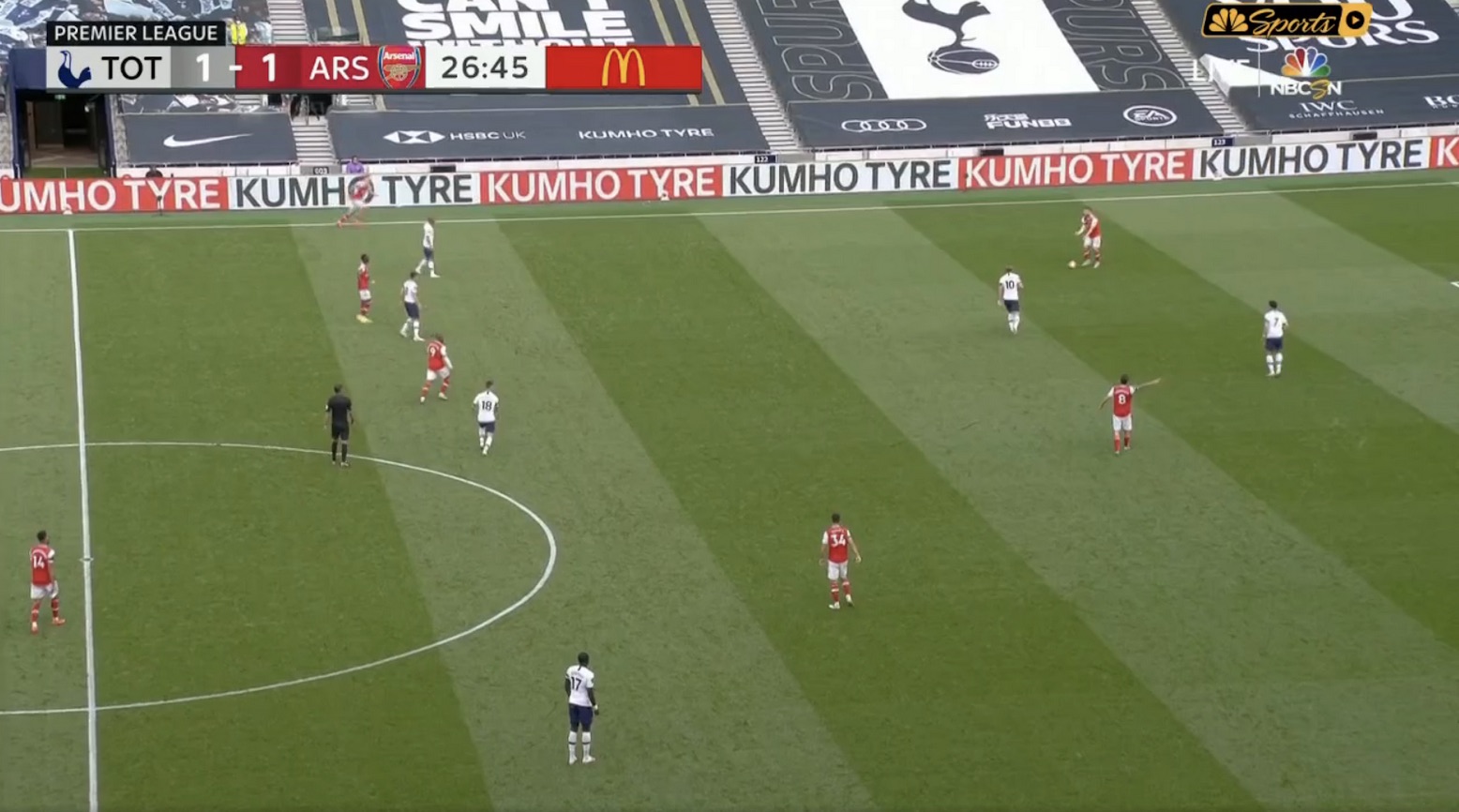 But there was no opening, and Lacazette finally gives in after a minute-and-a-half of waiting. But then what? Arsenal are six against eight, if we’re being a bit generous, and there’s no obvious path forward. There are certainly no options to hurt the heart of the Spurs defence. The ball ultimately goes out to Hector Bellerin but, with nobody to aim for in the middle, he massively over-hits his cross. 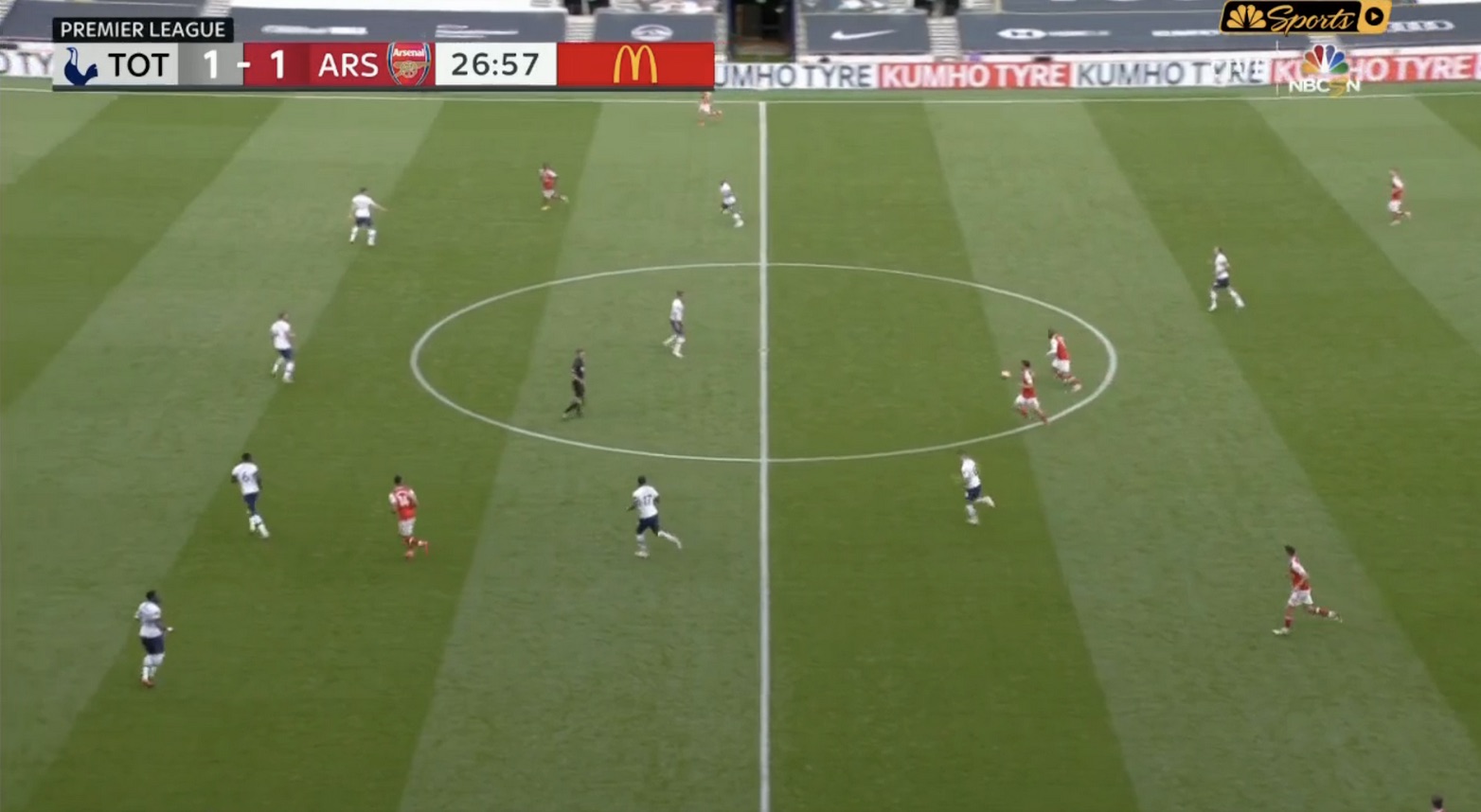 As I saw mentioned on Twitter on Sunday evening, this was very much a case of ‘illusionary domination’, a phrase favoured by Arsene Wenger when commenting on a team that had all of the ball but little imagination, guile, threat. Post-match, Arteta sounded like he’d taken another quote from Wenger’s past.

“I am disappointed and frustrated and really sorry for the boys first, because the way they played today and the personality they showed today, to come into this ground and show who we are, to nullify the opponents and press them high, forcing them to kick the ball long and defend in a low block. That’s exactly what we wanted to do.”

Those are very much the words of a Wenger/Guardiola disciple. And that’s no bad thing. Arteta’s right that Arsenal would have won but for silly mistakes, and there was some promise in the performance. But the team still struggled to create. Mourinho will feel his side were in complete control of the situation for the majority of the match. It’s about what you control and while Arsenal had the ball, they only used it where Spurs allowed them to.

It was surprising not to see a change at half-time – either Bukayo Saka for Kolasinac with Tierney moving back, or a switch to a back four – but it feels like Arteta isn’t trying to do too much at once with this team.

And the second half was actually better, at least to begin with. Spurs looked tired and Arsenal made it past Son/Kane with time to turn much more often, working themselves into positions near the opposition box. When there, they didn’t ask enough questions of Spurs but still managed to create more than before the break. Some smart play and a good pass from Granit Xhaka saw him find Hector Bellerin inside the box but the right-back’s first touch was too heavy for anything to come of it. 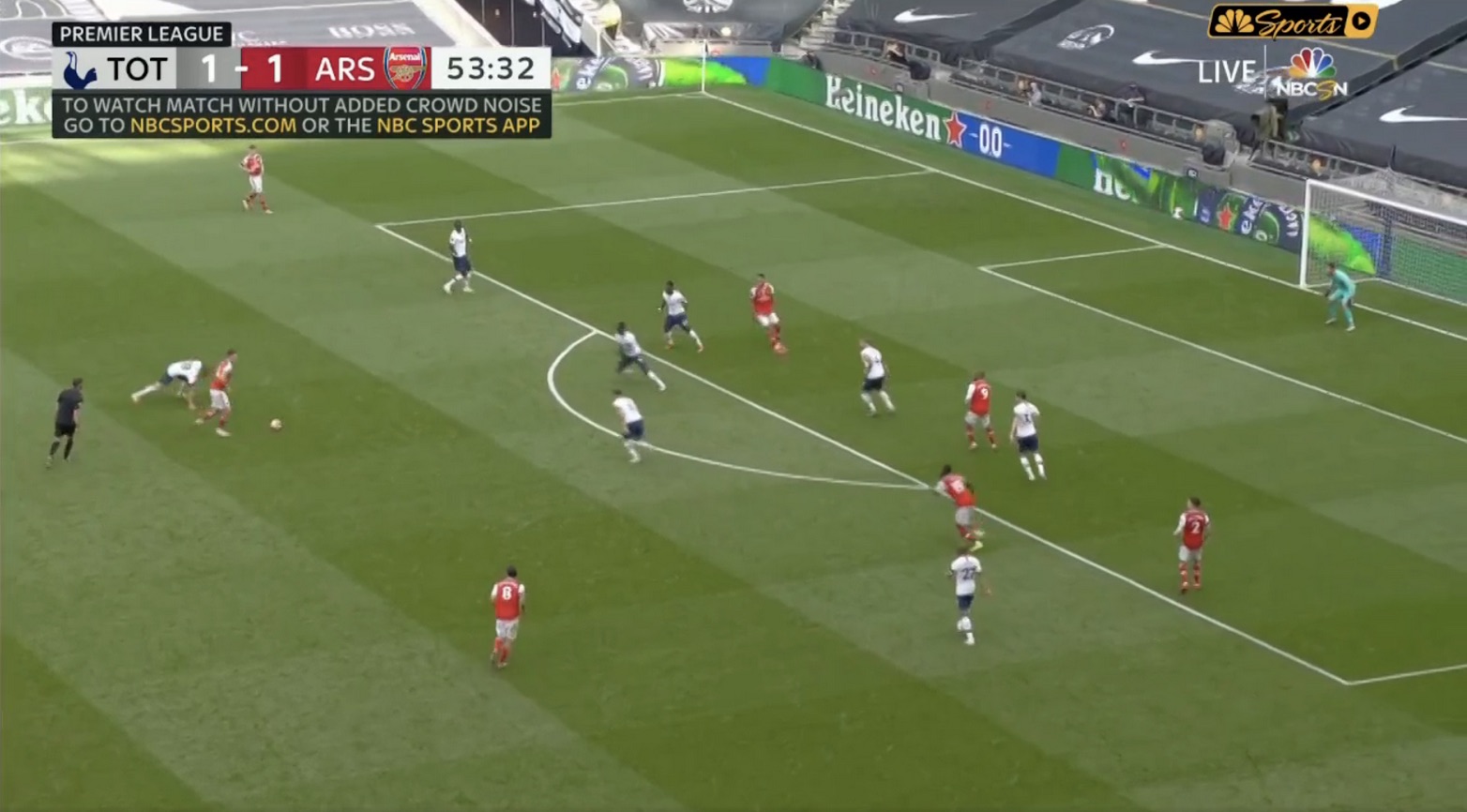 The good news was, Arsenal were finally getting numbers into the box, making runs, stretching Spurs and making life uncomfortable for them.

Options for quick combinations were there in the final third with Aubameyang shifting more central. Against a deep defence, his out-to-in role is only useful in the final 20 yards of the pitch, where he can drag the backline out of their positions and exploit the gaps that appear. 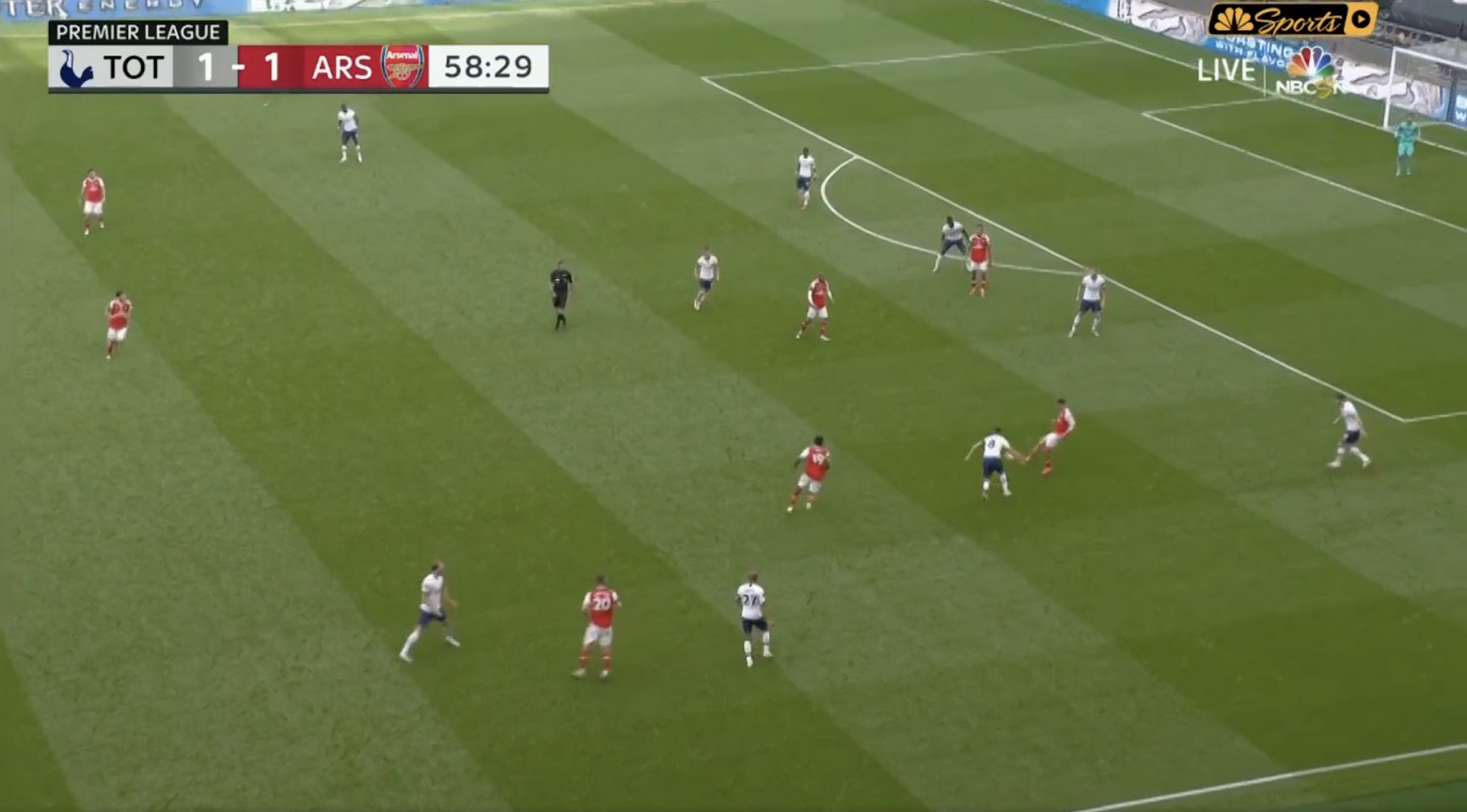 Pepe actually neglects the option to play the ball into Lacazette or Aubameyang (above), a sign that this really isn’t an Arsene Wenger side, which would have been stacked with players who wanted possession in those areas to commit defenders and shift the ball quickly. But the ball was worked to the left, then back inside, while Aubameyang intelligently worked himself some space outside of the back four and was unlucky to hit the bar.

The rest is a familiar story. Arsenal struggled to create, conceded ANOTHER goal from a set-piece, then lost their heads defensively and struggled to do anything offensively as they chased an equaliser.

So that’s now Wolves and Spurs who have decided not to really bother pressing the Arsenal defence into action, and the team have really struggled to break both of them down. The solution against Sheffield United who pressed, but not as much as Leicester or Norwich, was to include Joe Willock, a midfielder with a lot more verticality and off-the-ball threat, rather than the Xhaka-Ceballos combination.

Willock is far from ready to play for Arsenal every week but, crucially, he’s different from the other midfielders at the club. He impacts the game when he doesn’t have the ball, he isn’t desperate for possession at all times, and his movement from midfield can both exploit or create space.

Ultimately, since moving to the back three, Arsenal have improved defensively and are better at keeping the ball but are not completing anywhere near enough passes near the opposition goal. The team doesn’t create enough, and therefore doesn’t score enough, to win consistently. People may like to point to profligacy but Arsenal have outperformed expected goals handsomely so far this season. 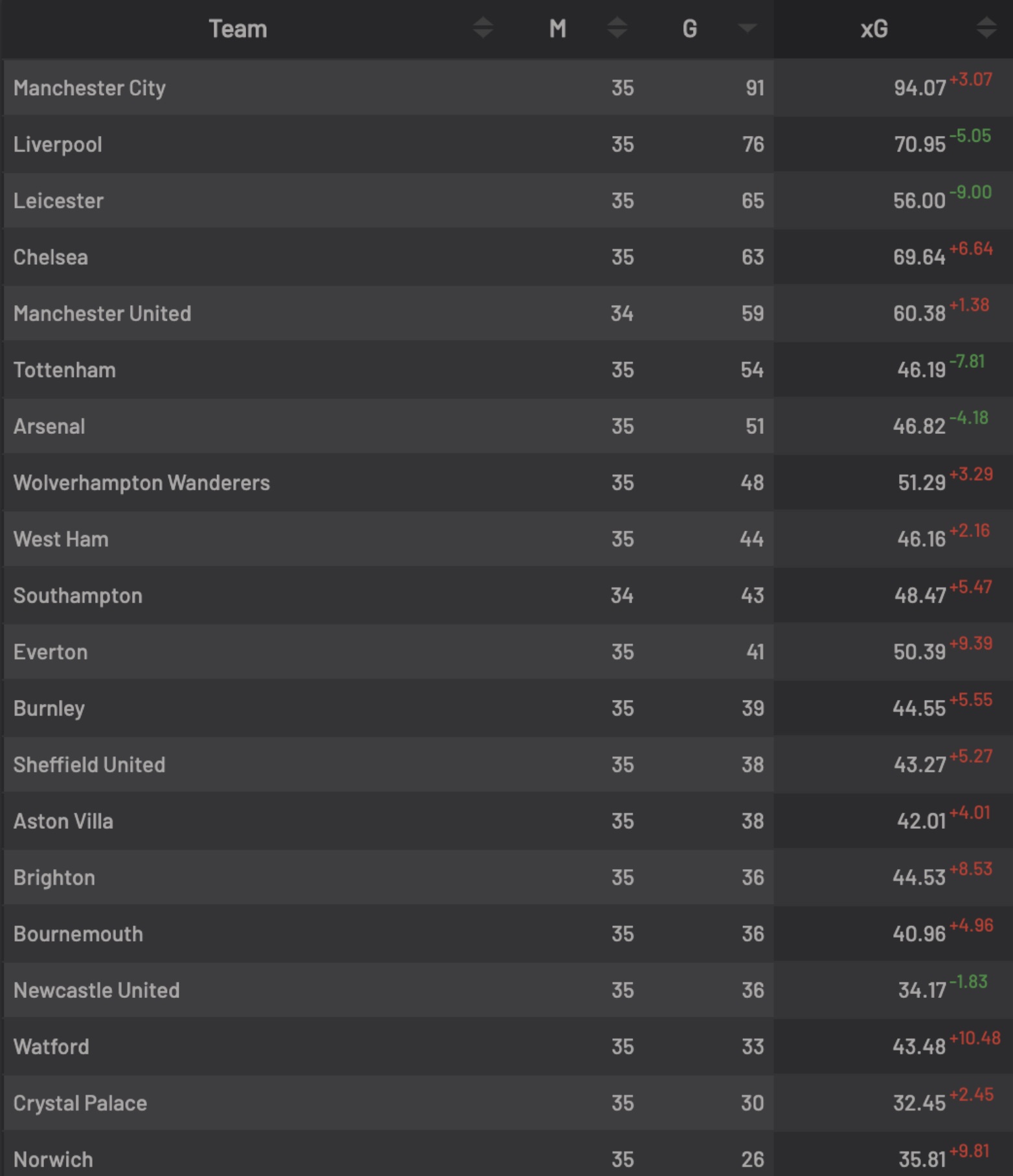 And a considerable amount of that over-performance has come in the five matches since the switch to a back three (Understat).

This isn’t a team wasting chances. The crux of the issue is creation and where Arsenal have the ball. There is little penetration and no consistent probing of the opposition defence. Long gone are the days of Arsenal ‘trying to score the perfect goal’ and the team being full of creative talents who wanted the ball all the time like Messrs Fabregas, Nasri, Cazorla, Arshavin, Wilshere to name but a few.

Looking at passes completed within 25 yards of the opposition goal since the switch to the back three, only Wolves and Burnley fare worse from the teams in the top half of the table. Manchester United (having played a game fewer in that period), like Liverpool and Manchester City, are miles ahead. 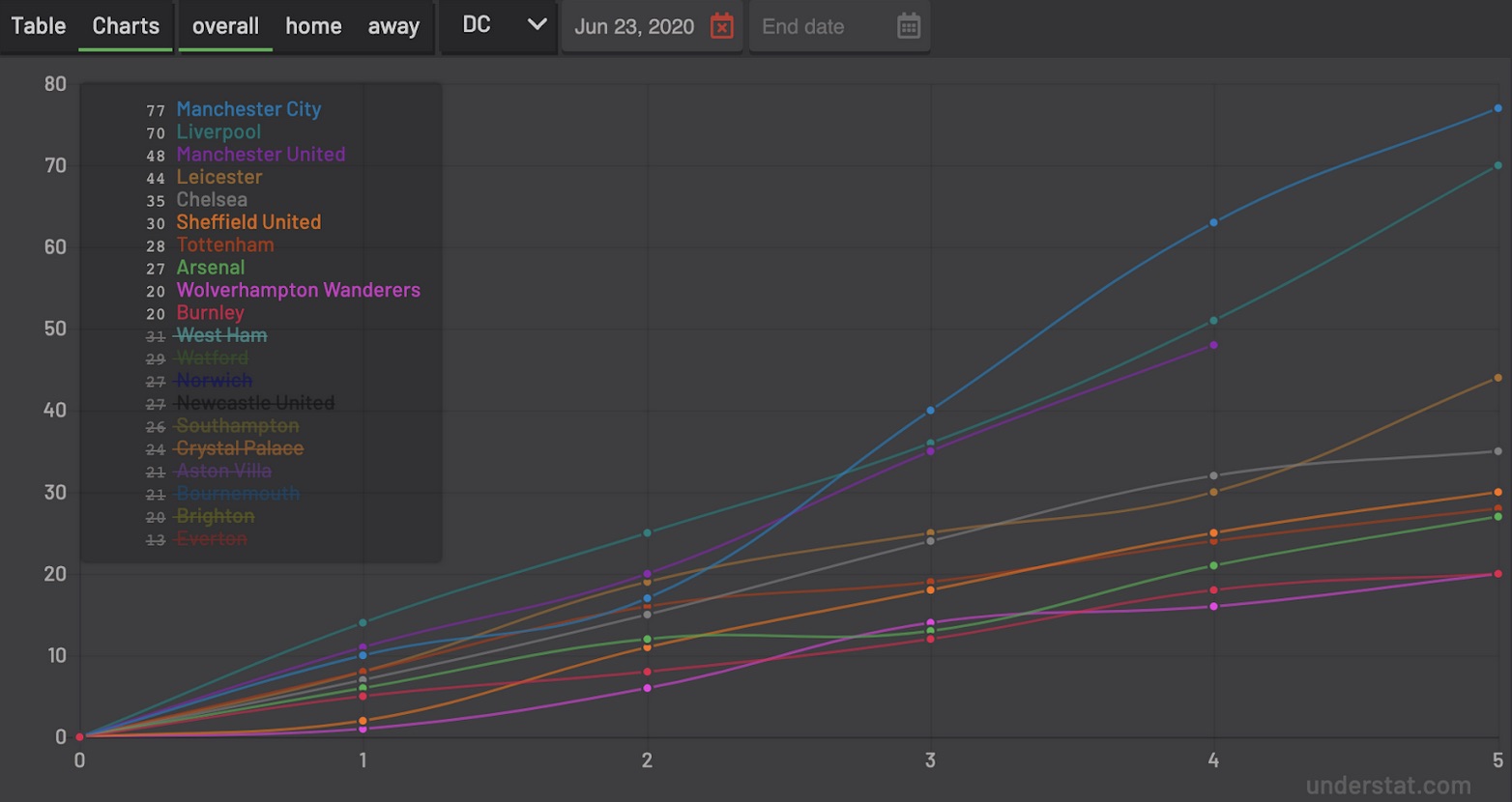 Casting aside the burning question (should a blanket ever actually be used to cover one’s head?!), the issue at Arsenal is obvious. Without much defensive reliability, Arteta is playing an extra centre-back in an attempt to make Arsenal more stable in their own third, but it’s starving the forwards in a team already lacking in creativity.