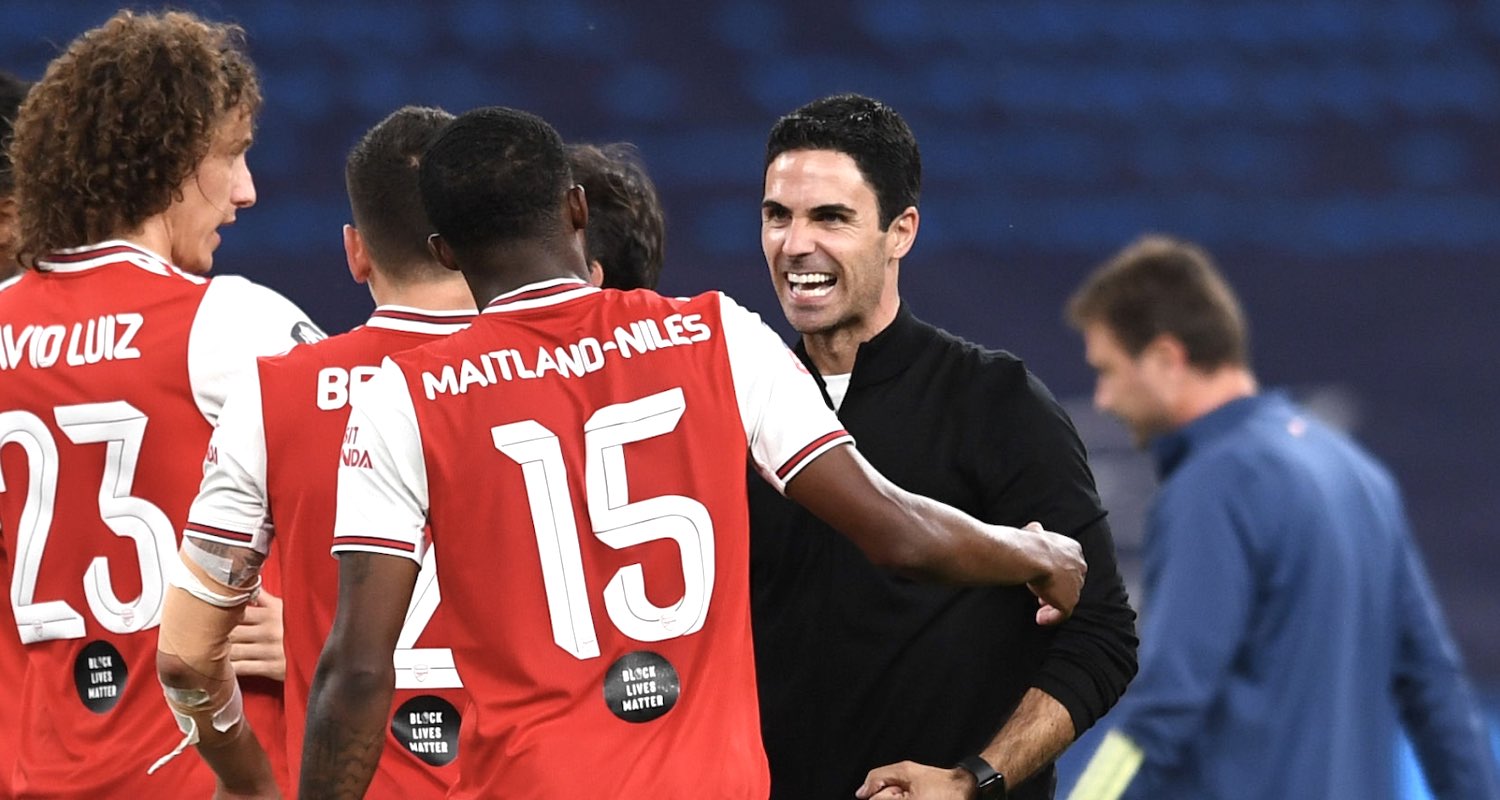 Sometimes, after a bad result, it’s hard to know where to start with the blog. Strangely, that can also be true after a good one, because there’s so much spinning around in your head that you want to talk about. And there was a lot going on at Wembley last night.

I guess the best way to do it is to say that we’re through to the FA Cup final after a thoroughly enjoyable/nerve-wracking 2-0 win over Man City. What we saw last night was an Arsenal team fully committed to dealing with an excellent opponent, a team that put in a huge effort, and which got its reward for that.

As expected, City dominated possession and the game was played in our half. We needed to be switched on defensively right from the start, Kieran Tierney and Granit Xhaka’s alertness saved us early on, and we got away with Mustafi doing an early Mustafi in our box. Perhaps an omen that if you can survive one of those, and we did it by defending that mistake, things might go your way.

After a while though, despite City’s dominance, something clicked from an Arsenal point of view. Lacazette put the ball in the net but it was ruled out for a very tight offside; and proactive defending from David Luiz high up the pitch was followed by a slide-rule pass to Pierre-Emerick Aubameyang, but with just Ederson to beat he smashed his shot straight at the keeper. It felt like we might regret that, because chances were going to be so hard to come by, but then we produced a genuinely excellent goal.

We kept calm at the back, passing it around in tight spaces – it’s always a bit of a worry, but there’s really no other way to play against a team that presses high, other than lump it long and lose it. We shifted it out to the left hand side where Tierney absolutely clattered the ball into Lacazette. I loved the intention and the power he put on that pass, and it was matched by a superb touch, control and shift to the right by the striker. From there Bellerin fed Pepe, and his cross to the back post was wonderfully poked in off the far post by Aubameyang. That was not an easy finish, but one which the move that led to the chance deserved. By any standards you want to set, that’s a brilliant, brilliant goal.

There was a lot to like about our first half. We still had to defend but we caused City some problems. Aubameyang’s decision making after we’d pressed them and won the ball high up the pitch was off momentarily and a chance was squandered, Mustafi had a header tipped over, and despite the obvious gulf in quality between the two sides, we held our own.

Clearly, Guardiola gave his team a rocket at the break because they came out fired up, more intense and even more dominant. The game was being played primarily in our half, and it needed us to be solid. There were moments – and I’m thinking of the chance Sterling put juuuuuust wide – where we rode our luck a little, but the fact that City ended this game with just one shot on target tells you everything about what our players gave out there from a defensive point of view.

It’s almost impossible to single out individuals, because they were all so good. However, I have to give David Luiz his props for what was his best performance in an Arsenal shirt. He’s not my favourite player, but credit where it’s due. It was the kind of game you need a 33 year old with his experience to have, and as the man in the middle of that back three he kept things organised. To be fair, Tierney and Mustafi either side of him were excellent too, the Scotsman has taken such steps forward now that he’s back to something like full fitness.

Granit Xhaka and Dani Ceballos worked so hard in midfield, winning tackles, and when you consider what Arteta has done with the Swiss international, as well as Mustafi – players who looked like their Arsenal races were well and truly run – it’s remarkable. The wing-backs were great, in particular Ainsley Maitland-Niles, a surprise selection on the left, but in a week in which his future was cast in doubt, the manager showed faith in him by selecting him and was rewarded. Arteta’s post-match comments don’t sound like the 22 year is a player he wants to lose.

Our second goal owed plenty to Pepe who may not have had as eye-catching a game as some but still made a big contribution. He kept the ball alive in a tight space near halfway, played it back to Tierney whose ball down the line for Aubameyang is what he lives for. With his pace, and all that green grass to run into, it was so hard for City to defend. He drove into the box at top speed, checked where Lacazette was, then nutmegged the goalkeeper to make it 2-0. I really enjoyed the deliberateness of that finish through Ederson’s legs, as well as Tierney’s post-game modesty, insisting it was all down to the striker. Auba’s response?

Come on that’s a f*cking assist bro and thank u for That ?????@kierantierney1

At the other end, Arsenal bodies got in the way of shots and crosses to snuff out danger; there was a chance for Sterling when Mustafi flicked the ball which took it away from Luiz, but it hit the England man and bounced into the arms of Emi Martinez. In the warm glow of the win, it’s perhaps easy to forget how relentless the City pressure was in the final 20 minutes. But we won header after header; Arteta’s introduction of Joe Willock for Pepe might not have pleased the Ivorian, but it was smart, giving us someone sitting a bit deeper and with more defensive nuisance value; Laporte shot just wide; but as time ticked slowly towards the end, it became clear this was a storm we were going to weather.

Guardiola’s resigned posture on the sideline told you plenty as Arteta continued to bark orders in various languages at his players.

Seven minutes of injury time felt a bit cruel, but the celebrations at the final whistle were evidence of relief, reward for that massive effort, but also a team which has found something within itself after facing the two most challenging opponents in English football in such quick succession.

I did not expect us to beat both Liverpool and Man City this week. I’m not sure too many people did, so to have come out on top in both of those games has been a lovely experience and a bit of a surprise. I always thought this was a project that would have ups and downs, that the ups have come in this fashion is very pleasing. Clearly there’s still so much to work on and get right, but a performance like last night’s – where every single player is committed and buys in to what’s required for the collective good – is a fantastic building block. Without that, you can fudge your way through games, but you’ll never find consistency.

We are really happy for what happened in the last four or five days, to beat probably the best two teams in Europe is not an easy thing to do. A lot of credit goes to the players for what they are doing and the performances and the level of fight and decision-making they are showing on the pitch.

He also spoke about what he’s getting from players who are suffering the physical effects of so much football in such a short space of time. This was our 10th game in a single month:

It doesn’t matter, we have players with injections, players that were sick, but they’re willing to play. At the moment I have a feeling that I can pick anybody that is ready to play and perform at that level.

The celebrations at the end between Arteta, his staff, and his players, were great to see. We all know there are improvements to be made, we all understand investment is required, but that connection between the manager and the team is not something money can buy, and it’s so important. He demands a lot of them, he tells them that if they suffer together they can achieve things, and this week has demonstrated that they believe him when he says that.

These two results also illustrate perfectly why Arsenal have to back Mikel Arteta properly. I don’t simply mean with money in the transfer market, although clearly that’s hugely important, but I think it’s pretty obvious we have a very smart, very thoughtful, very impressive young manager with a lot of potential. Given our current status, which is not where anyone wants a club like Arsenal to be, the work he’s doing will make plenty of other clubs with big profiles sit up and take notice. Arsenal have a chance to rebuild under Arteta, but as much as he loves the club – and I really think he does – he has his own ambitions for his coaching career. We have to make Arsenal a place where he realistically feels like he can fulfill those.

But look, those are discussions for another today. This morning we need to focus on what was a great evening at Wembley, and an outstanding win over a very good side. There are still two important Premier League games to play before the final, but what a thing it would be to finish this madcap season with a trophy. There is an element of bittersweet to it all, of course: the fact that fans can’t be there to enjoy it properly. I thought it was another little demonstration of Arteta’s awareness and intelligence that almost the first thing he did in his post-match interview was acknowledge the absence of Arsenal supporters, but all of that is out of anyone’s control right now.

For now, have a great Sunday, we’ll keep an eye on the other semi-final later to see who it is we’re going to play, and James and I will be here tomorrow with what promises to be a very goodly morning on the Arsecast Extra.