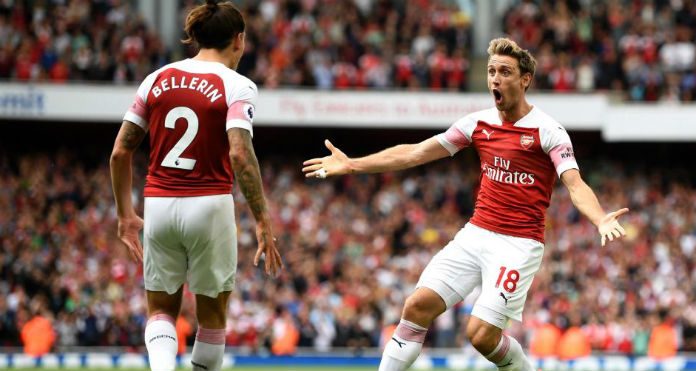 Good morning from Brixton where the moody, grey skies make for a truly autumnal morning.

The vast majority of the Arsenal squad should be back at London Colney by tomorrow as Unai Emery steps up his preparations for the trip to Newcastle on Saturday afternoon.

September’s second round of Interlull fixtures drew to a close last night with five Gunners in action. In Leicester, Stephan Lichtsteiner and Granit Xhaka went head-to-head with Danny Welbeck as Switzerland lost 1-0 to England in a friendly.

I didn’t watch any of the game but I’ve read positive things about Xhaka’s first half performance. The 25-year-old, who returned the captain’s armband to Lichtsteiner having worn it against Iceland, pulled the strings in midfield but was left frustrated by his team’s lack of cutting edge.

“You don’t get 20 shots on goal against such an opponent, that’s why you have to take your chances.”

Welbz was apparently busy, but ineffective in his 61 minutes on the pitch.

Elsewhere, Sokratis played 90 minutes as Greece lost 2-1 to Hungary in the UEFA Nations League and further afield, a couple of our loanees were also in action. Dave Ospina kept a clean sheet against a Messi-less Argentina in New Jersey – yes, I’ve checked…he did go down injured –  and Takuma Asano grabbed an assist off the bench as Japan beat Costa Rica.

There are two more Interlulls coming up this year with the next just 26 days away. By that point we’ll have played seven games across three competitions.

After the trip to St. James’ Park, our Premier League fixtures include visits from moneybags Everton and in-form Watford before we head to Fulham. Brentford visit the Emirates in the Carabao Cup and we’ve matches with Vorskla and Qarabag in the Europa League, at home and away respectively.

It’ll be interesting to see how Emery treats squad rotation during the period, especially as the rigours of regular football start to take their toll. Hopefully, it’ll stand us in good stead that 12 of the first team squad (Cech, Leno, Martinez, Bellerin, Holding, Monreal, Mustafi, Mavropanos, Ozil, Guendouzi, Lacazette and Iwobi) have been training as normal since being granted a couple of days off after the Cardiff game.

Jeorge Bird reports that those numbers were bolstered by seven guys from the Academy. Gedion Zelalem (back from an ACL injury), Emile Smith Rowe, Julio Pleguezuelo, Robbie Burton, Charlie Gilmour, Nathan Tormey and Talaji Bola all took part in first team sessions and may harbour hopes of being part of upcoming cup competition squads. A couple will likely be involved in tonight’s Checkatrade Trophy game with Coventry City.

By and large, the vibes from the training ground are good going into this busy period. Lucas Torreira, subbed with a tight calf at the weekend by Uruguay, was pictured listening to an Emery team talk. I think we can assume he’s fit for the weekend. And the club also shared a video of Laurent Koscielny, possibly a bit ahead of schedule, kicking a ball for the first time since his Achilles injury.

What’s more, as I inferred on Monday, Emery really seems to have captured the imagination of the players, even though they are being worked physically and mentally every day. Before the Spaniard arrived, there was a lot of talk about him introducing long video analysis sessions, if that is the case, Nacho Monreal doesn’t seem to mind.

“In training, he likes that every single player gives his 100 per cent in any moment.

“Training is one hour and a half, one hour 40, whatever, all the time we must give our best performance. If we have to run, we have to do it, don’t save any energy.

“After that, he loves that we enjoy and have a good atmosphere in the group. While we are training, it is ‘come on guys, do everything’ and after you will have time to relax and enjoy with your team-mates.

“It is good for the team. With Unai Emery, we work more tactically. He is a Spanish coach and in Spain we work a lot on tactics, set-pieces – I think we are improving in this aspect.

“This is our idea for this year – have more possession, don’t lose stupid balls in the middle of the pitch and be more compact than how we were before.”

I love the simplicity of that last bit.

Despite some pretty spurious rumours linking him with Barcelona, Monreal also confirmed that he’s in contact with the club about a new contract. The left-back last put pen-to-paper in January 2016 and will be a free agent next summer.

On the progress of negotiations, he added:

“At the moment we are talking with the club. I’ve always said I am really happy, I feel very happy playing for Arsenal. I came six years ago. I have a good relationship with them.

“We are in contact in any moment so don’t worry about that. I am happy here. That is the most important thing.”

Few could have predicted Nacho’s impact at the club when he signed from Malaga for £10 million five years ago. He’s a beautifully understated, underrated and hard-working member of the squad. And he’s a real threat from set pieces. If he wants to stick around, we should do everything to keep him.

Right, that’s all for today. If any further team news breaks, we’ll cover it on Arseblog News.