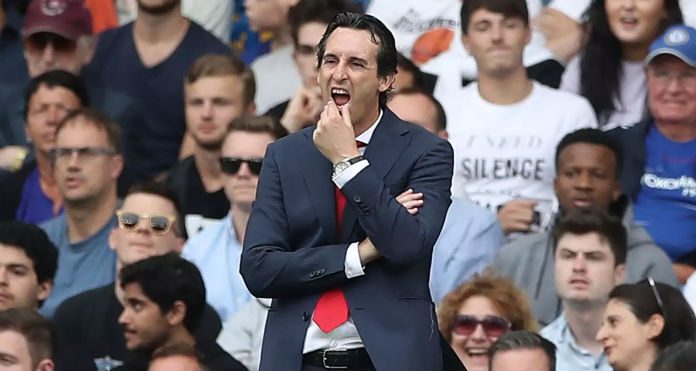 In yesterday’s post, I touched on why I feel there’s room for optimism at the Emirates after the first month of the season.

My positivity boiled down to the following; the head coach seems to have the faith of the players, we’ve won away, our new midfielders are showing promise and we’ve bagged a few goals.

I caveated all of the above by admitting it’s very early in the season; we’re only at the hand holding stage and the players and the coaching staff have a lot of work to do if they’re to persuade me to go to third base with them. So to speak.

I, like a lot of you, have been left in a fragile state by the way the Arsenal of the late Wenger years constantly found a way to self-destruct. It wasn’t just the tonkings at the hands of the big sides, it was knowing that a Glenn Murray header for Brighton was as inevitable as an Arjen Robben curler for Bayern. Our mental brittleness seemed to feed on our tactical unpreparedness, repeatedly leading to costly mistakes by individuals.

I think the scars run deep and I’m not naive enough to believe a change of coach can repair them overnight. Rebuilding confidence and strengthening trust inside the camp will take time. As Arsene used to say, “You go up by stairs and come down by the lift.”

Of course, time isn’t something that’s on the side of coaches in modern football. Arsene may have stuck around for 22 years but you have to axe two decades off that to get the Premier League’s average managerial tenure. In other words, Unai Emery has his work cut out. He needs to fix enough of what’s broken as soon as possible to engineer a route back to the Champions League places or the Emirates crowd, who are currently on his side and showing patience, may succumb to grumbling again.

I like Unai. I admire that he has a specific vision for how he wants his team to play. I just fear that it’s the game of a perfectionist and pulling it off with our current personnel is going to be a tall order in the ever more competitive Premier League. Our players, left to roam free for so long, have picked up some bad habits. Others, it could be argued, have never been up to the required standard.

Not only is he trying to teach them how to build play from the back (more on that in a bit), he’s also trying to instil the discipline and tactical know-how needed to pursue a high press game. Oh, and he’s working on their fitness because unless you’re a few goals up, you can’t afford to ease off the gas playing such tactics. It’s disastrous if you do, you get torn to shreds.

The goals conceded at Chelsea were embarrassingly bad, West Ham scythed through us repeatedly on the counter-attack and our unwillingness to close down crosses followed by our inability to deal with high balls into the box is something the coach lamented after the win in Cardiff. I’m not touching the City game, I’ll let Unai off that one. Worryingly though, we’ve already made six errors leading directly to opposition shots this season, more than any other side in the top division.

Defending with a high press is a collective effort, but obviously, the collective suffers when individuals make poor decisions or their fitness wanes. From the strikers through the midfielders, the aim is to regain possession as quickly as possible. In possession, you have to break quickly and move the ball through the lines and use the flanks.

So far it feels like Emery’s experimentation – he’s mix-and-matched Aaron Ramsey, Granit Xhaka, Mesut Ozil, Alex Iwobi and Henrikh Mkhitaryan to fill the midfield in his preferred 4-3-2-1 formation – has played a part in leaving the defence exposed at times. These players, learning on the job, have either not closed down space rigorously enough or, in possession, have been profligate in dangerous areas of the pitch.

Ozil hasn’t done enough to unshackle himself from his reputation as a luxury player, Xhaka’s mobility and tackling technique (or lack thereof) remain questionable and Ramsey’s attacking prowess often comes at the expense of positional discipline. Iwobi and Mkhitaryan may have hustle and bustle but their consistency on the ball is up for debate. I like what I’ve seen of Matteo Guendouzi, who has brought youthful energy to the centre of the park, but he’s 19 and very raw. Lucas Torreira, a player with experience as a defensive midfielder, has so far played only 119 minutes out of a possible 360. We need to see more of him to know if he’s the man to bring better balance.

Not only does Emery need to settle on a first choice midfield who knows what it is doing, the backup players, who’ll be needed in the cup competitions and if we get any injuries, also have to buy into what’s required. Do we have the squad depth? I think it’s strange that Mohamed Elneny hasn’t had any minutes at all yet. Ainsley Maitland-Niles is an interesting prospect, but he’s currently sidelined.

At the back, there are plenty of question marks. And fewer options. With Calum Chambers on loan, Nacho Monreal needed at left-back, Laurent Koscielny injured and inexperienced duo Rob Holding and Dinos Mavropanos being held back for the lesser cup competitions, Sokratis and Mustafi are what we have to work in the middle. Unfortunately, I’m yet to be convinced that the German and the Greek have the defensive nous and technical quality to work in the long-term. In theory, the fact they both like to win the ball back quickly should fit our high press system, but it doesn’t feel that way. The imbalance feels similar to when we coupled Koscielny with Thomas Vermaelen.

Sokratis has been more composed on the ball than I expected, but Mustafi remains a gung-ho presence capable of a mistake at any moment. His predilection for going to ground has always made me nervous. When he does stay on his feet – see his efforts against Alvaro Morata – he looks equally culpable of engineering a balls-up. Some people might say I’m being harsh or point to the fact he wasn’t coached properly under Wenger, but we did shell out £35 million for him. That’s a lot.

In the wide positions, it feels as though our full-backs are still coming to terms with the optimal moment to press. In the build-up to Pedro’s opener at Stamford Bridge, Bellerin charged into no man’s land leaving a huge gap for Jorginho to exploit behind Mkhitaryan. In Cardiff, the Spaniard came too narrow after Granit Xhaka gave away the ball and was late in his attempts to cut out the cross that led to Victor Camarasa’s goal. Hector has been a great attacking outlet so far this season, but if we’re not going to give him more protection he may have to curb some of his final third enthusiasm for the sake of balance against better opponents. Either that or we should give the experienced Stephan Lichtsteiner a go.

Of course, more than ever the spotlight is on the defence given Emery’s desire to see us build play from the back. It goes against everything that a traditionalist would ask of a keeper or defender, but when implemented properly it can help teams break down opponents looking to sit in compact lines / park the bus. It’s also very useful combating a high press.

It’s a high-stakes game that requires every player to have full confidence in their technical ability and well-attuned spatial awareness. Spend too long dawdling on the ball because your teammates haven’t made an angle to receive a pass and a tenacious forward or attacker will be snapping at you in no time. You may have spotted Cech growling at Guendouzi in Cardiff for not coming short to collect a pass after the keeper had carelessly given the ball straight to Harry Arter. On that occasion, the duo just about got away with their mix-up. The keeper should have cleared his lines, but the teenager could have made life easier in the first place.

I still think Cech’s a very good shot-stopper and I agree with Tim Stillman that, even at this late stage of his career, he’s intelligent enough to adapt his game, but that doesn’t hide the fact he’s looked unconvincing knocking balls about at the back. In addition to a couple of awkward moments at Cardiff, he nearly put the ball in his own net against City and was shaky in the early stages at the Bridge. He’s also not the quickest, so playing the sweeper role doesn’t come naturally.

It’s worrying that rumours have surfaced that we’re turning a blind-eye to Cech’s struggles because summer signing Leno, who does have a reputation for being good with his feet, hasn’t impressed in training. I guess we’ll find out soon enough what the German is like in goal; he’s likely to be handed a chance in the Europa League. No doubt Sven Mislintat will be watching closely…possibly from behind the sofa.

Overall, I think it’s right that the squad persists with the learning process, but I can’t shake the nagging feeling that our current personnel are going to concede loads of chances in the coming months. In turn, that could upset any momentum we build, both during games and on an ongoing basis. If the attack doesn’t pick up the slack, we’re going to drop points. That’s a big burden to put on them.

In his first press conference, Emery said: “I like possession with the ball, I like good pressing against the other team. I prefer to win 5-4 than win 1-0.”

I’ve seen enough to believe he wasn’t lying. Strap in.

On the news front, it’s still relatively quiet. Stephan Lichtsteiner, whose Switzerland face England tonight, insists he’s not retiring from international football. There’s talk of AC Milan giving up their chase for Ivan Gazidis, meh. And guff, that I won’t even link to, claiming Ozil could move to Turkey.

If you missed it yesterday, Blogs – dialling in from Spain – and James put together an Arsecast Extra for your delectation. They talk Hector, Santi and the weekend’s Legends game. As always, it’s well worth a listen.

Finally, it’s to my shame that I neglected to mention Arsenal Women’s winning start to the new WSL season in yesterday’s blog; they spanked Liverpool 5-0 with Dutch striker Vivianne Miedema hitting a hat-trick. Top work.