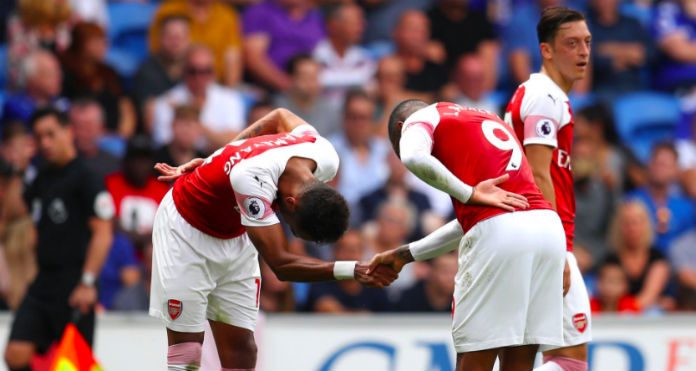 Exactly a month ago, I wrote in the 2018/19 preview on these pages that I thought Unai Emery’s debut season in England would be a ‘tough transition year’ for Arsenal and that we were ending the transfer window with an unbalanced squad.

Since then we’ve been swatted away by Manchester City, frustratingly lost to Chelsea and relied on our firepower to overcome West Ham and Cardiff.

It’s ridiculously early to be passing judgement on what the coaching staff and players keep referring to as a ‘process’, but after a couple of awkward first dates, we’re getting to know this team a little better. Joint bank accounts may be a long way off, but holding hands is a possibility.

“Being convincing is the most fundamental thing to coaching: the players have to believe in you.”
Unai Emery, May 2018.

So far, the players seem to trust Unai Emery’s vision. While the Spaniard has a reputation for being something of a tactical perfectionist – the type of coach who’ll stop a training session to physically manoeuvre a player taking up an incorrect position – you also get the feeling he’s told his squad that trying to implement his football philosophy will inevitably lead to errors and that mistakes, for the time being, are just about acceptable.

In that respect, he’s buying himself and his players time to get it right. If you’re going to play out from the back, you need players who are confident in their technical ability, confident in their teammates and confident in the coach’s vision. They also need to be able to do it quickly and that comes with practice. I don’t think it’s a coincidence that he’s kept faith with the same back four/five (injuries to left-back aside) despite the teething problems.

Hector Bellerin’s comments in The Times (£) at the weekend were telling:

“I am impressed with Emery. We lost our first two games but we were very close both times. After the match, the players could feel that things were coming together…Emery is very focused on preparing a plan for our next opponents, whoever they may be. It is very detailed and very professional. The next few months are going to be very exciting for all of us. We will reach a higher level.”

A renewed tactical focus isn’t the only thing that has changed at London Colney, word from the training ground is that the players enjoyed being worked to the bone in pre-season and that there’s a renewed competitive spirit being fostered by the performance team led by Darren Burgess.

A win on the road

“Once you’re in a negative spiral like that, it’s very difficult to get out.”
Arsene Wenger, May 2018

It feels vaguely ridiculous that an away win against a middling team like Cardiff should necessitate a bullet-point all of its own, but our form on the road has been so bad in 2018 that securing three points away from the comfort of the Emirates is a big fillip for this team. Remember, we lost seven in a row between January 7 and May 9. Seven!

In some ways, it helps that Neil Warnock trotted out the usual pre-game guff about trying to kick us off the park. He won’t be the last manager to say something along those lines, but at least we’ve seen it off on this occasion.

Yes, the game was scrappy. Yes, we still looked nervous playing out from the back. Yes, we didn’t deal with long balls into the box. But we won. When our midfield clicked – Ozil dropping deeper to get on the ball in the second half – our attackers had the quality to make space and take their chances. It’s vital we keep the momentum going at Newcastle before a run of homes games across three competitions.

“He is hungry – he wants to improve, he wants to learn every day, every match. He is doing it his way, with character and quality.”
Unai Emery on Matteo Guendouzi, August 2018

Let’s be honest, nobody expected the 19-year-old with the Sideshow Bob hair to have played more minutes (306) than anybody else in our midfield after four Premier League games. He’s still raw and prone to the odd lapse in concentration but you can’t fault his willingness to drop deep, to own the ball as often as possible and to move play forward quickly. It’s to his credit that Emery felt him the best option to start the season as our ‘water carrier’ and he’s justified his selection so far. He’s not all about neat passing either. An aggressive presser and decent reader of the game, he’s already racking up decent stats for interceptions and tackles.

Guendouzi’s game time has come at the expense of Lucas Torreira, who, having started pre-season a little late following the World Cup, has only played 119 minutes so far, all off the bench. At 5ft 6” he cuts a diminutive figure in the centre of the park but he’s looked very neat and tidy so far. Like Guendouzi the 22-year-old likes to keep the game ticking over and he’s also capable of spotting a forward pass; his ball into Lacazette for the Frenchman’s winner at Cardiff was beautifully weighted. It went unnoticed at the time, but you’ll also notice the Uruguayan charging into the box after that pass, ready to pick up any scraps from a saved shot. No doubt, he’ll get more game time in September and we’ll get to understand his full range of qualities.

“It is nice to play with Aubameyang because I think we complement each other, so it is always good to play with good players.”
Alex Lacazette, August 2018

Since drawing a blank against City, we’ve found the back of the net eight times. That’s not to be sniffed at. If we’re not going to be defensively solid this season, and it’s looking that way, then it’s vitally important that we create chances up front…and take them. We learnt that the hard way at Stamford Bridge when Iwobi, Mkhitaryan and Aubameyang should have put the game beyond the home side. Emery mentioned that the Gabon international was struggling for confidence after that match, but he’s found his stride with a fine Henry-esque curler at Cardiff and added to his season’s tally with a goal for his country against Burundi.

That Auba’s goal in Wales came while playing to the left of Alex Lacazette also gives Emery food for thought. The Spaniard was reticent to play the duo together from the start but after the French striker’s man-of-the-match showing – a performance full of hustle and bustle, as well as attacking prowess – you suspect he’ll stick with the set-up. Having struggled with injury last season and missed out on being part of France’s World Cup winning squad, you get the feeling Lacazette is a man on a mission. He appears to have overcome the self-doubt that racked him earlier in the year and in Auba, he’s found an extrovert with whom he seems to match both on and off the pitch.

Welbeck’s goal against West Ham was a timely reminder that he’s still a dangerous presence off the bench and Mustafi was quick to remind everyone that his recent header wasn’t an anomaly; Arsenal do score a lot of goals from set pieces even without big Olivier Giroud on the books (9 from corners was the EPL’s joint highest last season).

In our early-Noughties heyday, what set us apart was goals from midfield. Messrs Pires and Ljungberg were double-figure regulars and that’s where we’ve struggled recently. Can we find a system that affords Ramsey the chance to make those deadly late runs into the box more regularly?  Might Mkhitaryan rediscover the scoring form that he was known for at Shakhtar and Borussia Dortmund? Can Iwobi and Ozil weigh in with a few? Here’s hoping…

Optimism doesn’t come easily to me…so, to balance things out, I’ll be back tomorrow with why I still have concerns about this team.

If anything Interlully happens today, we’ll cover it on Arseblog News.