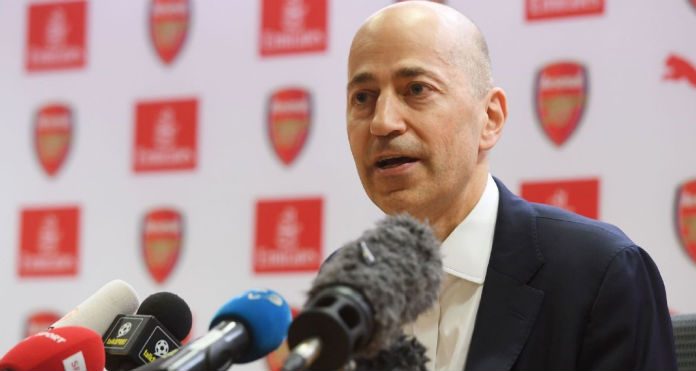 It looks increasingly likely that Ivan Gazidis will leave his position at Arsenal to become the new CEO at AC Milan.

Elliott Management, the US hedge fund that owns the Italian club, identified the 53-year-old as their number one target for the position when they completed a takeover in July and the two parties have been negotiating a suitably agreeable financial package ever since. After something of a stand-off, the big Italian publications reported yesterday that a breakthrough has been made.

Gazidis has a 12 month notice period at the Emirates, but it won’t be in Arsenal’s interest to stand in his way. If he wants out, he’ll be allowed to go.

The job on his hands at the San Siro is not insignificant. Milan may have a reputation as one of the continent’s most glamorous and successful clubs, but their financial situation is a mess.

Owned for 31 years by former Italian president Silvio Berlusconi, Milan was sold to a Chinese-led consortium for €740 million in April 2017 but fell into the hands of Elliott Management in July 2018 after Li Yonghong, the frontman of the new regime, defaulted on debts he owed them. In short, Li spent huge money gambling on a quick return to the Champions League and lost. To rub salt into the wounds, his ‘investment’ drew the wrath of UEFA who deemed the spending to infringe their Financial Fair Play regulations.

The Court of Arbitration for Sport recently overturned a ban from this season’s Europa League, but the emphasis is firmly on Elliott, who’ve injected more cash, to steady the ship at the San Siro. It’s Gazidis’ hand they want on the tiller.

On taking over at Milan, Paul Singer, Elliott’s co-CEO and an Arsenal fan, said: “Financial support, stability, and proper oversight are necessary prerequisites for on-field success and a world-class fan experience.”

I reckon Ivan would happily call a premium-rate number to listen to words like that all night long.

Gazidis, previously the deputy commissioner at the MLS, was an understated hire when he joined Arsenal in 2009. Arsene Wenger, who’d played a big role in the interview process, described him as ‘a competent man’ capable of dealing with the ‘extreme pressure’ of life in football’s spotlight.

His immediate remit as CEO was to take the strain off Arsene and Ken Friar on the transfer and contract front. In the long-term, he was charged with growing the Gunners global brand and strengthening our financial muscle.

Despite the grandiose responsibilities, it was Arsene’s world in which Ivan began to operate. In the aftermath of David Dein’s exit and the move from Highbury to the Emirates, and against the backdrop of Stan Kroenke and Alisher Usmanov’s burgeoning ‘Cold War’, the Frenchman had made himself the lightning rod for Arsenal-related attention. From signings and sales to the results; he was the most powerful figure at the club and he knew it.

Only in the last year, with a significant restructuring of the club’s football operations and Wenger’s dismissal, has Gazidis stepped out from the Frenchman’s shadows. That wrestle for power should have taken place far sooner. Easier said than done? Perhaps. But it’s on his watch that we’ve deteriorated on the pitch, doing so within four years of him declaring, “We are moving into a new phase where, if we make our decisions well, we can compete with any club in the world.”

On first hearing the Gazidis exit rumours, the unrivalled Swiss Ramble took to Twitter (full thread here) to share his analysis of the 53-year-old’s tenure at the Emirates.

He noted that Arsenal’s revenue has grown by an impressive £198 million since January 2009, outpaced only by Manchester City and Manchester United in absolute terms. However, this was the second smallest percentage growth of any of the big six clubs and £125 million of it came from TV money.

On the commercial front, he added that despite a headline-grabbing deal with Puma and the renewal with Emirates – both deemed ‘slam dunks’ – we’d achieved the second lowest total of that same big six. Worse, our second successive failure to qualify for the Champions League will likely see the financial gap between us and Bayern Munich, a club long admired by Gazidis, return to what it was before we made those gains. We’ve not made the progress we should have.

Gazidis, like Arsene, firmly believed that Financial Fair Play regulations would play in Arsenal’s favour and that the transfer playing field would level out after years of billionaire cash injections. That trust, for various reasons, was misplaced. Maybe he never really believed it and just wanted to downplay the hindrance of Wenger’s parsimonious tendencies.

By July 2016, he seemed to hint that Arsenal should take a leaf out of Leicester City’s book. Instead of pitching us as a powerhouse to be feared, he suggested we follow the lead of a club who’d achieved a once-in-a-lifetime success by, amongst other things, scouting lower league players.

He optimistically stated: “I think we are looking at new dynamics. I think Leicester are the vanguard of a changing dynamic within the Premier League. I don’t think general perception has yet woken up to that, but I think it will over the next season and the years ahead.

Few would argue Leicester’s achievement was anything other than an anomaly. Granted, there was some logic to Gazidis’ thinking, he wanted a renewed focus on cutting-edge enhancements on the medical, fitness, analysis and psychology fronts – improvements we’re now making – but it also sounded like a tacit admission that competing financially with the game’s superpowers was not going to happen. His love for a slick soundbite really bit him on the arse.

I think Arsene was right when he described Gazidis as competent. He’s a safe pair of hands. A smooth operator at boardroom level. And he’s always been open to keeping a dialogue open with the supporters; something that may well die out with his impending exit and Kroenke’s full takeover. That said, he’s also been bloody expensive and has pocketed the best part of £21 million from us. I don’t believe his departure should be feared, despite the awkwardness of the timing.

Maybe history will be kinder on Gazidis’ time at Arsenal. We can only hope that the foundations that he’s laid are strong and that the club under Unai Emery, Sven Mislintat, Raul Sanllehi and Huss Fahmy can start competing at football’s top table again soon. We’ll find out soon enough. Now the search for a new man must begin.

Elsewhere, Freddie Ljungberg’s under-21s kicked off their Checkatrade Trophy campaign in style with a 3-0 win over Coventry City. Emile Smith Rowe, Eddie Nketiah and Joe Willock, three players who all featured on our tour of Singapore, got the goals. I’ve not seen any of the action yet, the match wasn’t broadcast, but the result against senior opponents speaks for itself. Well done lads.

I’m expecting Unai Emery to face the press later ahead of Saturday’s trip to St James’ Park so that should give us plenty to talk over tomorrow. In the meantime, we’ll cover all the quotes as they are made available on Arseblog News.