In a summer not lacking discussion points at Arsenal, Danny Welbeck’s contract situation went somewhat unremarked upon. With a change in manager and five new signings to talk about and with Welbeck on England duty at the World Cup, the subject did not surface often. On reflection, it seems a little bizarre that Arsenal did not appear to try to sell Welbeck or to renew his terms.

While the player himself missed a large chunk of pre-season, players are not exactly heavily involved when it comes to contracts and transfers. As far as I am aware, Welbeck’s agent was not part of the England squad, it seems odd to me that nothing could be done until the man himself was in his training kit at London Colney.

A 27 year old England international forward ought to have made good money on the domestic market, with mid-table Premier League clubs now awash with cash. Southampton have pledged £20m to signing Danny Ings after all. Some stories appeared a few weeks ago that the Gunners were looking to move Mohamed Elneny’s wages off the books.

Many publications carried this story, which suggests that the media were briefed to this effect. Casually writing off a potential transfer fee for a 27 year old England forward doesn’t seem like the appropriate course of action for a club enduring sleepless nights over Elneny’s £5m a year salary. Contract and transfer management are two areas where Arsenal seriously need to improve.

Liverpool’s recent transfer largesse has been funded by logical ‘asset management.’ Players such as Suarez and Coutinho had their contracts renewed shortly before jumping ship to Barcelona. Liverpool probably knew both players were not longed for Merseyside, so they made sure they were well compensated when the call came from Catalonia.

In conjunction with this, Liverpool have secured good fees for players they no longer had use for- they took north of £50m from Crystal Palace for Mamadou Sakho and Christian Benteke and Southampton will pay them £20m for Danny Ings next summer. The revenue has been used to buy players they do want. Arsenal have seriously floundered in this respect in recent years, allowing even squad players to dictate to them.

There has been a move to address that this summer. New contracts for the likes of Alex Iwobi, Calum Chambers, Ainsley Maitland-Niles and Reiss Nelson should be viewed as a form of asset protection, as opposed to an emphatic show of faith. Likewise, Granit Xhaka’s deal had 2 years to run prior to his latest renewal this summer, it made sense to tie him down now even if his long term future is not totally decided.

That makes Welbeck’s situation all the stranger. With Alexandre Lacazette and Pierre Emerick Aubameyang ahead of him, it is unlikely he will muscle his way into the starting XI, so the prospect of renewal seems faint- especially as the player himself can look forward to a healthier salary if he leaves on a Bosman transfer next summer. There is still some squad surgery to do and limited funds to do it with, Arsenal could have used the money from a Welbeck sale to perform some of it in future windows.

Nevertheless, since Welbeck is here, he can be a useful and interesting squad player for Emery. Danny’s career has been blighted by an identity crisis to this point. He is not ruthless enough to be a centre forward, but he is also not quite cute enough to be a devastating wide forward. He is an intelligent, multi-functional player with good physical gifts, but he sits firmly in the ‘jack of all trades, master of none’ category.

The presence of Lacazette and Aubameyang provides him with significant obstacles as he seeks to cement a place in the first XI, but conversely, their dual presence is helpful for the occasions when he does play. Welbeck is a good foil for a more predatory partner, more sidekick than gunslinger. Playing with either one of Lacazette or Aubameyang suits him far better than being the torch bearer at centre forward.

Emery asks his wide forwards to play in the half spaces and allow the full-backs to provide the width. This explains why we have seen Mkhitaryan and Bellerin combine to good effect so far this season in an attacking sense. It also partially explains why the Gunners have been a little exposed defensively- Emery doesn’t really play with wide forwards in the traditional sense. 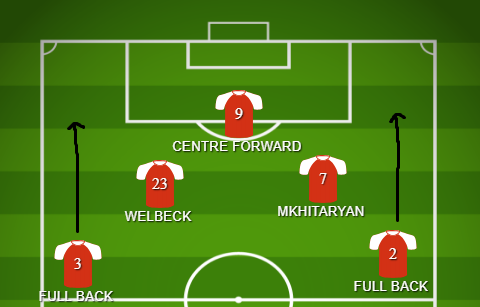 They come in-field to form an attacking triangle and I think Welbeck could perform well in such a role. He began last season quite well in a similar role. Welbz is generally good at following tactical instruction and he works hard off the ball too. He is well suited to enact the high press that Emery favours, but playing in the corridor between centre forward and the wing would suit him well I think.

This hybrid role where he would be expected to be neither wide nor central could go some way to abating his identity crisis. He has a good sense for when to join a centre forward and combine and when to drop in and provide security off the ball. His diligence potentially makes him very useful- he is also conscientious about protecting his full-back- an area where Arsenal are still fine tuning.

Arguably, Welbeck is a better fit for this hybrid role than Aubameyang, but the Gabonese’s overall quality makes him an obvious pick ahead of Welbeck. Welbeck has formed good partnerships during his time at Arsenal, combining to excellent effect with the likes of Sanchez, Walcott, Iwobi and Alex Lacazette.

Nice run from Lacazette to take Balbuena away from Welbeck. https://t.co/ftNmN3aUsJ

Welbeck and Lacazette in particular combine well, the Frenchman’s cute front post run created space for Danny’s goal against West Ham last week. We see something similar for this header against Bournemouth last season, with Welbeck returning the favour later in the same half with a fine piece of combination play to tee Lacazette up.

In an article earlier this year, I compared Welbeck (favourably, I might add) to Emile Heskey. He does not necessarily impress with his individual feats, but he does have a knack of extracting the best from a more prominent partner. In a sense, he is like a set of stabilisers for someone like Aubameyang or Lacazette. He combines especially well with athletic colleagues.

In Emery’s system, Welbeck doesn’t need to be a tricky winger or to try and beat a man. He would be stationed a little closer to the centre forward without being asked to lead the line and I think that could suit his qualities quite nicely. Arsenal certainly should have resolved his contractual situation one way or another this summer, but he can be a useful player in the forward line this season.

In the meantime, Emery will get a little closer to finding out whether Eddie Nketiah and / or Reiss Nelson could take his place in the squad next summer. Having written off a presentable transfer fee for Welbeck, it would prove quite convenient if Arsenal did not have to spend money replacing him in the market.