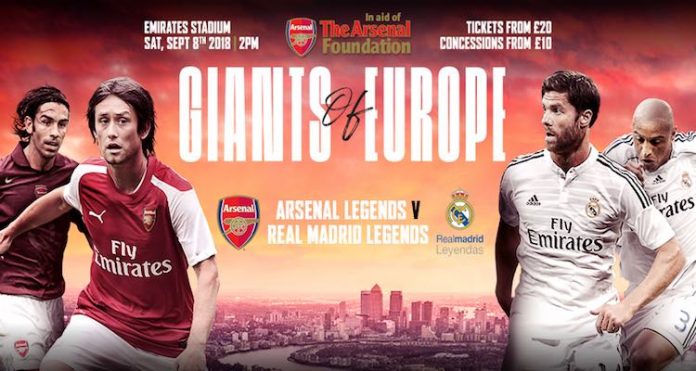 Arsenal Legends are preparing for the return leg of their match against Real Madrid Legends at Emirates Stadium on Saturday 8 September (kick-off at 2pm).

We’ve teamed up with Gunners to offer a lucky reader a pair of VIP tickets to this unique game, at Emirates Stadium.

The match, which sees net proceeds from ticket sales donated to The Arsenal Foundation for a ground breaking new football project, is the second leg of this charity fixture which ended 2-1 at the Santiago Bernabéu, on Sunday 3 June 2018.

With David O’Leary, alongside Assistant Coach Pat Rice at the helm, a number of Arsenal Legends including Robert Pires, David Seaman and Fredrik Ljungberg will put on the Arsenal shirt once again for a great cause. Real Madrid Legends travelling squad will include Brazil’s World Cup winners, Ronaldo and Roberto Carlos amongst others.

For the opportunity to enjoy a day out in style at Emirates Stadium during the September international break, just answer the following question:

Which Arsenal Legend made 564 overall appearances at their time at Arsenal?

Send your entries to [email protected] before Friday at midnight.

Tickets are still available, from £20 adults and £10 concessions – get yours here.