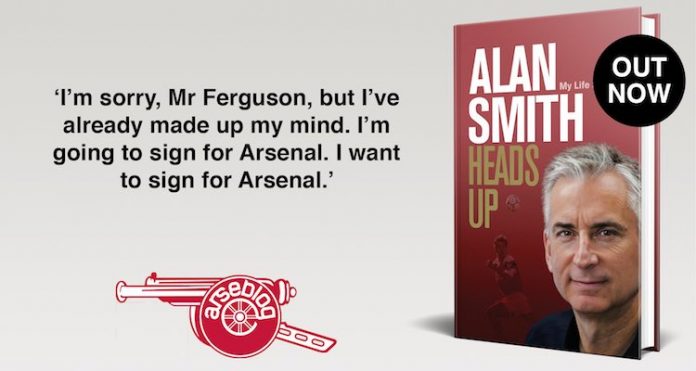 Thanks to Little, Brown Book Group we have 10 signed copies of Alan Smith’s brand new book: Heads Up – My Life Story to give away.

It’s launching this evening in the Tollington, so if you’re in the area get down there and pick one up, but if you’d like to enter the competition, simply answer the following question.

Was it a) Lincoln City b) Birmingham City c) Leicester City

Answers to [email protected] before midnight on Sunday, and we’ll announce the winners on Monday’s blog.

In the meantime, here’s an extract from the book as Alan reflects on one of his most famous goals.

I hadn’t experienced anything like this: a European final, a different story altogether from domestic triumphs. To come good on this stage added something valuable to your CV, confirming you as a player capable of adjusting to and thriving against a different style of football. In short, it meant a great deal.

We had to win first, though, otherwise, in years to come, my goal would be reduced to a tiny footnote. And the prospects of victory began to look bleak when Parma continued where they had left off. In other words, throwing everything at it. Zola was at the forefront, first going close with a free-kick before forcing Dave Seaman to pull off his best save of the night.

After that, there were several nervy moments that could have gone the other way – offside decisions and last-ditch tackles. Lee Dixon, for instance, can’t help laughing when remembering a scything challenge in the box that poleaxed his man. Somehow, the ref waved play on. In the end, then, a combination of acute defensive nous, sheer determination and a bit of luck saw our heroic back four emerge unscathed. Against all the odds, we had come out on top. When the final whistle blew, the Arsenal flags waved, the fans went ballistic and the players jumped around, struggling to believe we had actually done it.

My emotions were a jumble as teammates rushed across to say well done. Of course, I was happy, but at the same time something held me back. This couldn’t compensate for the lack of enjoyment over the last few seasons. I would have swapped this moment in a flash for scoring fifteen to twenty goals in each of those campaigns, for returning to the confident figure of years gone by. I looked up to the stand, trying to pick out Penny, just as I had at Anfield in 1989. In moments like this, you desperately want to see loved ones that have lived through the tough times as well as the good. Penny had been my sounding board, someone willing to listen. Among all the faces, I couldn’t pick her out.

The trophy handed over, a scrum of photographers yelled for me to hold it aloft. OK by me, for a short time anyway, but after a bit I felt uncomfortable, standing there taking the glory.

Back in the dressing room, I slumped down next to Bouldy. ‘You’ve done it all now, Smudge,’ he grinned. ‘A goal at Anfield, two Golden Boots and now this.’ I looked across at my mate, happy to just smile. In the short time since the final whistle, I hadn’t given a thought to the broader context – for all of us really, not just me. Since the majority came together in 1988, this group had won every domestic honour going. This felt like the icing on the cake, only Arsenal’s second European trophy in history.

The short flight home was filled with champagne and song, including a chant to salute my contribution. Much to my embarrassment, ‘Walking in a Smudger Wonderland!’ rang out several times. Being the centre of attention has never sat right. Mind you, more was to come. After walking through customs at Stansted in the early hours, Tony Adams, the boss and I stood posing for photos with the shiny trophy, looking a little dishevelled in our Arsenal blazers.

Alan Smith – a super strike for the Gunners