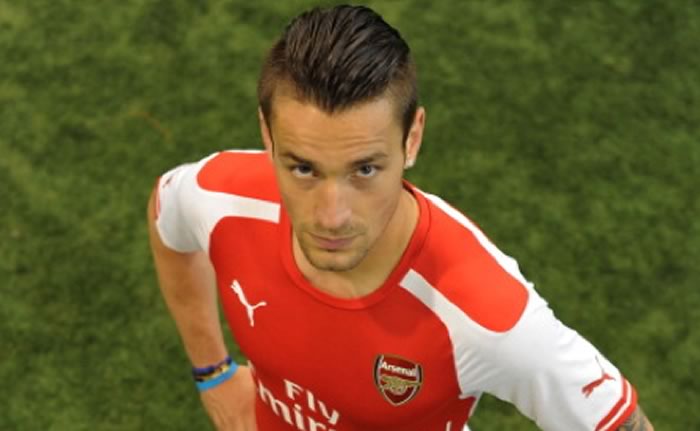 So, the second signing of the summer was confirmed yesterday and what a bolt from the blue it was. Mathieu Debuchy joins from Newcastle. Somebody really should have said something before now. Where were all the ITKs?

Obviously he’s a direct replacement for Bacary Sagna. He’s taken his place in the France national team and now he’ll slot into his position at Arsenal too. Speaking about his move, the new boy said:

I’m very happy to be at Arsenal, and to sign for this big club. I’m very excited to get going. Arsenal are one of the biggest clubs in the whole world. I am very proud to sign for Arsenal and to wear the colours.

We are delighted to welcome Mathieu Debuchy to Arsenal Football Club. He has shown he can perform at the highest level with his club sides and also for France. He is a quality defender who has good Premier League experience and I’m confident he will fit in very well with us.

The player spoke about how the lure of playing Champions League football was part of the attraction and he arrives after 18 months at Newcastle which will ensure there’s no settling in period, no adapting to English football and I think that’s been a factor in the manager’s decision making too. Sagna was a important cog in that back four and Debuchy is a signing designed to make the transition as seamless as possible.

He’ll wear 2 on his shirt, like any good right full-back should, which means that both he and Kieran Gibbs are sporting the correct numbers for their positions after years of wonky digits there. He’s clearly first choice, and that does have some implications for Carl Jenkinson. If he, as Sagna’s understudy for the last two-three seasons, was hoping to given the nod then he might be feeling disappointed today, however, the boss has challenged him to fight for a place in the team, saying:

There’s an interesting fight there. He is going to compete, of course. There is nobody today who can play 60 games at the top level – that’s why you always need two players.

Yet, what he says about Debuchy indicates that what the manager wanted in Sagna’s replacement isn’t yet found in Jenkinson:

He’s a guy who will bring something to the team with the departure of Sagna. We needed to sign somebody and I think Debuchy is the perfect signing.

In the Mirror this morning there’s a story about how West Ham want Jenkinson, either on loan or in a permanent deal, and from what I understand our interest in Atletico Madrid’s youngster Javi Manquillo is still ongoing, so I don’t think Jenkinson’s future is exactly clear just yet.

What I do know is that if he does stay he’ll give it 100% every time he plays and although the very early part of his Arsenal career exposed him to a certain extent, I think he’s been a steady performer and has developed well since he joined. When Sagna was out of the team with his broken leg, Jenkinson stepped in and for the most part played well for a guy still learning his trade at the top level.

Remember, it wasn’t long ago he got a call up to the England squad because he was playing well enough for that to happen. So if he stays I have no problem with him as deputy to Debuchy. However, it wouldn’t surprise me at all if he were to go out on loan – but I believe that’s dependent entirely on what happens with Manquillo. The manager has often spoken about a player’s future as if it were cast-iron only for them to move shortly afterwards, so I guess we’ll just have to wait and see.

For more on Debuchy, including a Newcastle’s fan view and some vague statistical analysis, check out this post from a couple of weeks back which gives you all that and more.

Overall, I think it’s a solid piece of business, with the fee believed to be around £10m. And it continues the encouraging start we’ve made to our transfer shenanigans. We needed a forward, we went out and got a forward. We needed a right back, we’ve gone out and bought an experienced international, and it’s still only mid-July.

Obviously there’s more work to do to get this squad 100% ready for the new campaign. There will have be further arrivals, and with the 25 man squad limit, it’s safe to say there might have to be a couple of departures too, but there appears to be a fastidiousness to what we’re doing this summer that there hasn’t always been. Let’s hope we keep that up in the coming weeks.