A Newcastle view of Debuchy + round-up

We’ve got some World Cup later, which we’ll come to in a bit, but the main story this morning is that the Mathieu Debuchy deal seems pretty much done. I think all we’re waiting on now is official confirmation of the transfer. There’s some speculation that it might include a part-exchange with Joel Campbell or even Carl Jenkinson going the other way, but I’d be surprised if that were the case. I reckon it’s a straight up cash deal.

In terms of what he brings to the squad, I’m sure you’ve all seen the defensive comparison but just to refresh your memory here’s a graphic via squawka.com. 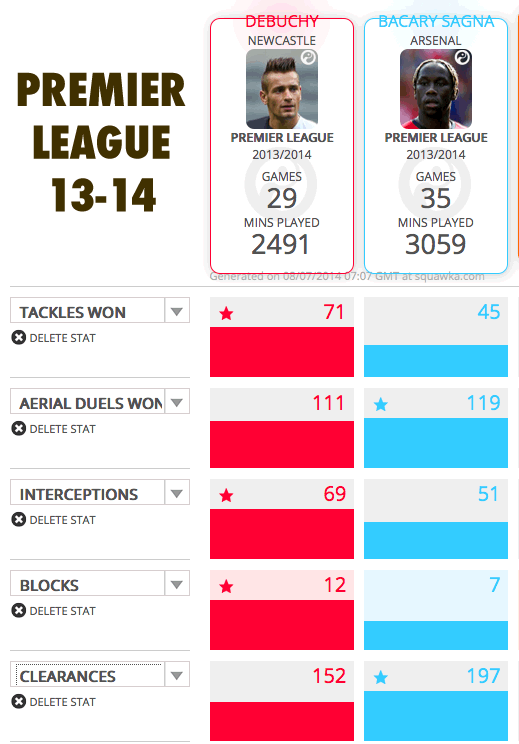 Offensively they’re very similar too, with the same number of goals and the Newcastle man slightly out in front in terms of chances created with 23 to 21. The aerial duels stat is also an interesting one because one of our tactics in recent seasons has been to aim goal kicks towards Sagna and that outlet can continue with Debuchy (in the absence of somebody with more aerial ability in midfield).

What would concern me slightly is the pass completion stat. Sagna’s was around the Arsenal average of 85%, with Debuchy’s at 73%, which is definitely something he’ll have to work on. Some of that, I guess, is down to how Newcastle play and he may be under instruction to get it forward rather than play it safe. A key indicator there is the fact that he played just 267 backward passes in the season compared to Sagna’s 791, an indicator that Arsenal are prepared to retain possession with a more cautious approach.

However, we know stats don’t tell the full story, so to get a better idea of what he’s like, I asked Ed from nufcblog.com for his views on the player. He watches him week in, week out, I don’t, so here’s what he had to say to the questions I posed to him.

1 – What would you say are his strengths?

He’s a very good attacking full back, gets up the wing quickly and he can put a good cross over. Mathieu gets forward as much as he can – and when given the chance he’s also got a decent shot on him.

Mathieu goes forward so much that he sometimes gets caught up-field and out of position. When he started out on Tyneside he was also a bit reckless with some of his tackles inside the box and gave away a couple of penalties. But he improved a lot in the 18 months he was at our club, and he’s a much better player than when we initially signed him.

3 – I’ve seen some Newcastle suggest there’s a lack of discipline with him, both in terms of his positional play, and also because of cards he’s picked up. Is that something that should be a concern?

He does tend to pick up some cautions, but as I said before he’s improved his discipline and other elements of his game – and there’s still room for improvement for him at Arsenal. Don’t think it should be a concern.

4 – One of Bacary Sagna’s strengths was his aerial ability, how is Debuchy in that regard?

He’s a decent header of the ball and probably on  a par with Bacary in that element of his game.

Newcastle fans are sad to lose him for at least a couple of reasons – he was one of our best players last season and he’s only been at the club 18 months – and since he gives 100% in every game and has a great temperament – most of our fans will be sad to see him leave. Unfortunately he wants Champions League football and we cannot give that to our players in the foreseeable future.

6 – Any other observations not covered by the questions?

He’s a very good professional and a positive lad too. I still think he will get better at Arsenal.

So there you go, and thanks to Ed for that. Perhaps he’s not the signing everyone would have wanted, but it does seem as if it’s a sensible enough one. There’s some work to be done on certain aspects of his game, but from what Ed says he seems like the kind of guy who’d be up for that and his age (28, he’s 29 at the end of this month) does allow the younger guys like Jenkinson and Bellerin to continue to develop and provide back-up without completely shutting the door on their Arsenal futures.

Meanwhile, in answer to something I mentioned on yesterday’s blog, it turns out the boss is still in Brazil. Thanks to Chris and Barry for the info (and a picture too from Barry with Arsene in a rather demure black t-shirt and shorts!), but it does look as if things are progressing on the transfer front without him being back in England. I assume that means Steve Bould is taking charge of the early part of pre-season training, but much of that is general fitness work anyway, so I’m sure Arsene has delegated to his coaching staff.

Tonight, we’ve got a World Cup semi-final between Brazil and Germany. I think the Germans are favourites, especially as Brazil’s attacking thrust has been diminished severely with the injury to Neymar. It’ll be interesting to see if Per gets back in the team after missing out last time, but Mesut Ozil’s so-called ‘flop’ of a World Cup has been defended by the Germany assistant coach, and he should start.

In other news, David Court, a long standing member of the youth set-up, has become a casualty of the new regime, but at 69 years of age, his time was always going to be limited. I’m very interested to see how Andries Jonker sets about improving things at that level, even if it’s going to be some time before we get to see the results of his work.

Finally for this morning, James and I will be recording the Arsecast Extra in a little while. If you’ve got questions, send them to us via Twitter (@gunnerblog and @arseblog), use the hashtag #arsecastextra and we’ll do our best to get to yours. The podcast will be available before lunchtime today.