A central defensive signing is crucial for Arsenal this summer

It’s quite interesting to look at Arsenal’s squad on the official site. For all the talk of Sami Khedira, and people still going on about Loic Remy for some reason I can’t really fathom, the shortcomings further back are blindingly obvious. 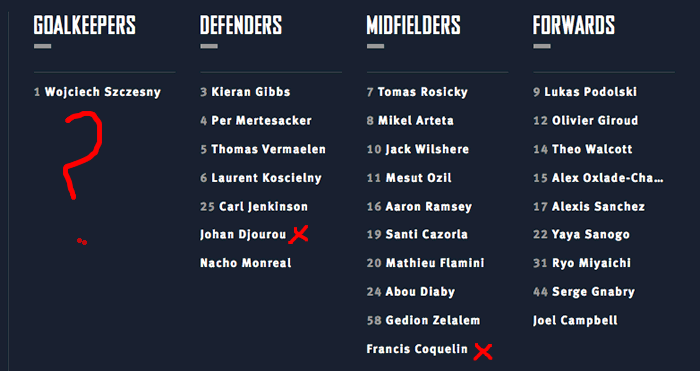 I think we know there are efforts being made to rectify the fact we have just one goalkeeper. A new signing is inevitable there, and a third choice keeper promoted from within – most likely Damian Martinez – sorts us out for the season.

However, is it time to be concerned that as it stands we have just six first team defenders in the squad? I think we’ll be adding Mathieu Debuchy to the list sooner rather than later, but even still I believe we’re short a centre-half. With Per Mertesacker given an extended holiday due to his World Cup winning antics with Germany, that leaves us with just Thomas Vermaelen – who apparently wants away – and Laurent Koscielny.

Johan Djourou’s name is there but that situation is a strange one. Towards the end of last season there were reports that he’d triggered an appearance clause in his loan deal with Hamburg which made the deal permanent. Indeed, he’s even listed on their website with no mention whatsoever of him being on loan from us.

If there’s anything to be gleaned from his web presence, it’s that he appears on his official website in a Hamburg shirt. His Twitter and Facebook are fairly neutral, but having lost his way at Arsenal it seems unlikely that after more or less two seasons away from the club he’d be considered an option even if we do retain his rights. So let’s count him out.

For all the talk of us being unlucky with injury last season, we also had a fairly decent slice of good fortune in that neither Mertesacker or Koscielny picked up any serious knocks. Vermaelen’s availability was, as it has been since he arrived, somewhat sketchy and there were periods when our only back up at centre-half was Bacary Sagna. The Frenchman’s versatility provided the manager with a little bit of wiggle room but now that he’s gone there’s nobody else in the squad who can do the job.

Some people have suggested Carl Jenkinson might be earmarked as a back-up central defender, but I really don’t see that happening. He’s a player whose skills are best suited to full back. His energy, commitment and delivery mean what he does he does best down the right hand side. I don’t think he’s got the aerial ability to play at centre-half and I’m not sure he’s quite as assured as you need to be on the ball.

So, with Mertesacker unlikely to be properly fit and ready until the end of August at the earliest, that leaves us with Vermaelen and Laurent Koscielny to get us through the Community Shield, three league games, and two Champions League qualifiers. It’s why, at this moment in time, I cannot see us sanctioning the sale of the Belgian, the circumstances simply don’t allow it.

Yet it also highlights our need for another central defender regardless of those circumstances. I think we rode our luck getting through last season with just three. I believe you need four players for that position if you want a squad with the requisite depth to get through all the games we’re going to have to play between August and May. Premier League, Champions League, FA Cup and Capital One Cup – and let’s not forget all the internationals that take place during the season which do have an effect on players in terms of injury and fatigue.

There have been whispers that we’re after a young centre-half, possibly Jamaal Lascelles from Nottingham Forest, but beyond that, for all the rumours that fly around in the off-season, I can’t remember us being linked with any other candidate for the centre of the defence. Perhaps we’re doing it the right way, keeping things under the radar as much as possible. I’d very much like to believe that, and with Arsene Wenger back from Brazil it’d be nice if something got done because as the upcoming schedule show, it’s an issue that is somewhat pressing in my opinion

Sanchez is a great signing, adding depth and quality to our forward line. If we sign Khedira, then I think our midfield is as strong as anyone in Europe, but I don’t think we can ignore the fact that there’s work to do at the back. There’s little point having such a potent forward line and so many options in midfield if a kick here or a red card there leaves you scratching around for a fill-in player in one of the most important areas of the pitch.

Speaking of Khedira, there’s little new. His agent told the press yesterday that they weren’t negotiating with Arsenal or Chelsea, which could mean a hundred things. Maybe they’re not negotiating right now, or maybe they’ve already done all the negotiating they need to do.

Khedira is a player I’ve been told by somebody very close to the situation is keen to go Arsenal. Does that mean Madrid are as keen to sell him? Does that mean that Wenger is prepared to meet the valuation of a player who is out of contract next summer? I’m not so sure.

I think a reluctance by us to pay over the odds for a player in the last year of his deal is much more likely to be what’s holding things up than the player’s wage demands. As Gunnerblog pointed out on Twitter, it’s rare for a buying club to make contact with a selling club without already knowing more or less what the player wants.

At this point, I think I’d be more surprised if it didn’t happen to be honest, and if it does it’s hard to argue with the way we’re doing our business this summer. But in doing so, let’s not ignore the defensive elephant in the room that’s obvious because there is no elephant.

We need an elephant.