As footballing weeks go, this one has been a bit like finding out John Terry is your biological father and that your conception was captured on Ashley Cole’s camera phone and the footage sold to the News of the World. In fact, the last two months has been like some kind of maudlin Clockwork Orange style scenario where we’ve all been strapped to our chairs, our eyelids held open by rusty hooks as we’re played repetitive footage of Rory Delap’s long throws, Harry Redknapp’s twitching nutsack of a face and Phil Brown singing Perry Como covers to your Nan. All this whilst getting a lap dance from Sam Allardyce. Last week I wrote about the seemingly attractive figure of hope having sashayed into view on the dance floor. Turns out it was Richard Keys in drag. The hands should have been a dead giveaway. The simian twat.

As such the red and white corners of the interweb have been in meltdown with the latest stream of foam mouthed bile. Indeed, as the final whistle sounded at a sun-kissed Reebok Stadium, I headed for the exit with the speed of Kevin Davies chasing a hotdog van. (The locals did raise a smile with their rendition of “Bolton’s a shithole, you should’ve stayed home” as I made my frantic search for stage left). The air turned very poisonous, though there was no orchestrated chanting to the effect, there were plenty of anguished screams for the manager’s head. Frankly, I didn’t really want to stay and have my ears erode clean off the side of my face due to stray acid laced spittle.

I won’t go too much into the minutiae of the last two games – save to confirm that since you’re reading this, I obviously escaped from White Hart Lane alive! No thanks to some shoddy policing. The police thought it would be a good idea to momentarily prevent the away fans from blending seamlessly with the home support on the Tottenham High Road and instead left us like sitting ducks for a few nervy seconds; affording the knuckle dragging factions of the home support ample time to identify us, before we were released into the lip of the lion’s cage. If anyone from Haringey Police happens to be reading, please police all future North London derbies in exactly the opposite manner that you policed this one. Cheers. 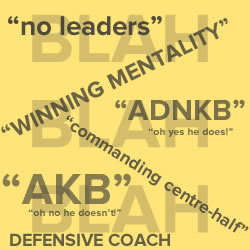 Having dropped, or rather given away, points in each of our last three games, internet forums have become a cauldron of ideas and half solutions. Unquantifiable and therefore completely disprovable buzz words are rolled out en masse. “Leadership”, “winning mentality”, “commanding centre half.” Even the word “capitulation” now seems to be firmly entrenched in the Gooner lexicon. In truth, I think a lot of the solutions offered are rather half baked. Since none of us know exactly what happens on the training ground, it’s difficult to come to the sort of concrete conclusions that so many appear convinced of.

For instance, I’ve seen many a call for a specialist defensive coach to come in and help aid the team’s obvious vulnerability to set pieces. Yet Arsene Wenger, Pat Rice, Boro Primorac, Neil Banfield and Steve Bould all earned their corn as defenders and all are on the training ground every day. Would another defender really make a difference? Perhaps it’s the opposite? George Graham was a centre forward that sculpted one of the meanest defensive units the English game has ever seen. Who knows, perhaps that’s what we are missing in those situations? A centre forward’s perspective. Let’s get Duncan Ferguson on the payroll, get him to knock our centre halves around a bit when they practice corners!

We have now conceded 3 goals from the last 25 corners we’ve faced and scored none of our last 47 won. In that respect, it’s probably not difficult to guess why the team is so poorly drilled at defending corners. They probably look like expert set piece repellers at London Colney, as van Persie sends another delivery dribbling across the daisies to be hacked away at the front post by Laurent Koscielny. There are plenty of calls to freshen the coaching staff up – with Pat Rice’s likely retirement at the season’s end that might be an enforced eventuality anyway – but the truth is none of us are privy to what goes on at the training ground, so it’s hard to see how people can say with such conviction that that is the solution. Don’t get me wrong, it might well be, but ultimately we’re all of us pissing in the wind a bit here and it wouldn’t hurt some of us to admit it.

My own guess (and it is a guess) from the evidence I see on the pitch is that there maybe the need for a slight reconnection with some basics. The team that lost to Bolton and drew with Spurs was largely the team that was shoeing all comers back in January and February and keeping clean sheets galore along the way. But simple things appear to have deserted us and perhaps we need to reassert those faculties. Delivery of crossing, defending and taking of set pieces (whatever happened to van Persie’s free kicks?), shots on goal, marking opponents. We know we can pass triangles all day long, that quality hasn’t deserted us. Neither has effort been lacking. But our profligacy and tendency to over elaborate has been just as much a devil in the detail of the last two months as the shoddy defending of set pieces. 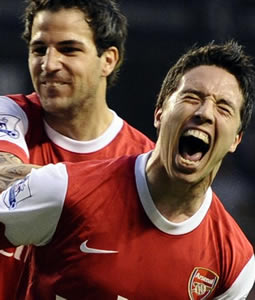 I don’t believe that achieving that requires wholesale changes to either the playing staff or the coaching staff; though I could be wrong. For all the talk of beastly defenders and new goalkeepers, I do rather worry that our creative options are not as well stocked as they might be. Cesc Fabregas has an assist for every 171.6 minutes played this season (thanks to @Orbinho for that one) and Robin van Persie has 20 goals in his last 21 club and international matches since January 1st. Beyond those two, it’s difficult to see where an Arsenal goal will emanate from at the moment.

Nasri and Arshavin can create for themselves in isolated moments of inspiration, but we regularly face ten man defences and nobody but Fabregas has the guile to split them in twain. It’s an incredible burden Cesc takes at the moment and one I think he takes manfully, but I don’t think it would hurt to augment our options in that department. Particularly now that Tomas Rosicky has burned all of his earthly possessions and trotted off to live with the jackals.

There are palpable divisions in the fan base at the moment, which baffle and infuriate me. It’s like that Life of Brian sketch, The People’s Front of Judea versus the Judean People’s Front. I guess it’s a symptom of party politics and religion, but everybody seems to want to conceal themselves in little boxes. That way, all intelligent debate is eliminated. You’re either an AKB or you think Arsene’s a stubborn old cunty chops that should be marched off and shot and don’t you dare try and assert an opinion anywhere in between lest you be cast asunder! It always brings me back to this Chris Rock sketch.

That brings me finally onto the notions of a supporter protest prior to the Villa match. I really struggle to see what it’s trying to achieve. Yes, yes, I’ve seen the manifesto, but aren’t these issues that existing organisations such as the AST or AISA could take up with the club? Who goes on a march about retweaking commercial strategies? It reminds me of a quip Armando Iannuci made on Have I Got News For You a few weeks back about organising a march for those that don’t necessarily believe in stringent Government cuts, but do concur that the Government’s administrative budget could do with a rethink. The transfer window does not open until July 1st, the club ownership has changed so recently that the documentation is still in transit. And would this march, walk, whatever be going ahead if we were top of the league, or even if we were still 3rd but had won the Carling Cup?

Again, I can only speculate, which is all any of us can do. Let’s hope a win over Manchester United makes the world a brighter place when I speak to you again this time next week. Until then, whatever your opinions, Up the Arse!
LD.

Previous articleExperience and competition + protest thoughts2
Next articleBeware the Goroallas