“Mikel Arteta has helped them both to make a lot of actions near to the box. The qualities one against one, we say to the wingers when you receive the ball, if the control is good, the shape is good, go, go, it doesn’t matter if you lose the ball – try it.” – Pep Guardiola

As City’s assistant coach, Arteta was trusted to work with players on their play in the final third. Their movement, their decision making. And it paid off massively.

Which brings us to Arsenal. Arteta seems to have decided to move captain Pierre-Emerick Aubameyang back up front permanently, leaving no place in the side for Alexandre Lacazette. The burden for goals is going to have to be covered by improvement from other areas — the rest of the squad doesn’t contain a single prolific goalscorer.

So what a relief it was to see Emile Smith Rowe and Bukayo Saka both netting their first league goal of the season in Sunday’s north London derby.

It’s a sign of things to come from those two. Smith Rowe is fantastic at balancing an attack by offering runs in behind or coming short to distract a defender, that was clear as he played more centrally and aided Nicolas Pepe against Brentford in the opening day defeat. When tasked with running in behind and adding more of a final third threat, he can do plenty of that too.

He was brilliant from the left against Tottenham last season and excellently balances the requirements of the position in Arteta’s system — drifting inside to give Arsenal another central player, combine with Kieran Tierney on the overlap, get in behind the opposition defence. But he wasn’t getting enough chances. That may be changing. In 2020/21 so far, he has taken twice as many shots per 90 minutes compared to last season and his xG per 90 minutes has also doubled.

Smith Rowe is a player who can bend to the will of the manager and with Martin Odegaard now added permanently, there is less need for the Englishman to get on the ball to create, but he can instead play to his strengths and driving in possession and accelerating attacks, hopefully leading to him arriving in the box more often as well.

Which brings us to Bukayo Saka, who has a knack for that kind of thing. He may have only scored 13 Arsenal goals up to this point but he has played a fair chunk of his first team football at left-back and we forget that he has only just turned 20. Even when further forward he’s had to play on the left a lot to accommodate Nicolas Pepe. There has been plenty of talk about that of late and I didn’t think it mattered too much — Saka is good enough to have a big impact from either side — but now, it’s hard to argue against him being first choice from the right.

His most threatening attacking displays — Leicester, Wolves (2019/20) and Newcastle, West Brom, Southampton (2020/21) — have come from that side and Sunday’s win was just another example. Saka is happy to go on the outside, he scored and assisted with his right foot, but he also arrives at the back post more consistently from there, Robert Pires style. Raheem Sterling style.

With a better delivery arriving, or a different bounce on the ball, or a couple of saves or deflections, he was in a prime position to take advantage throughout the first half. 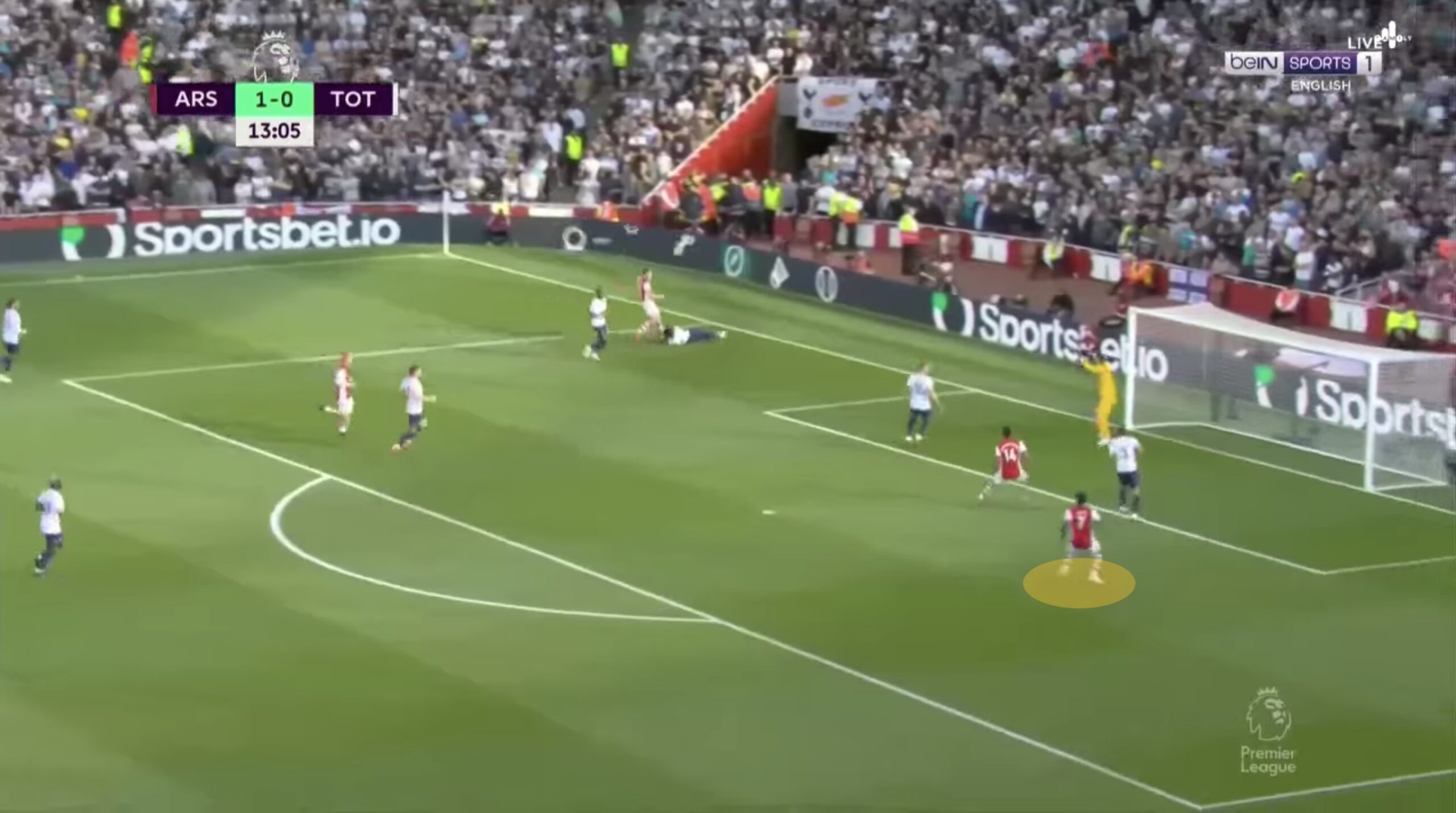 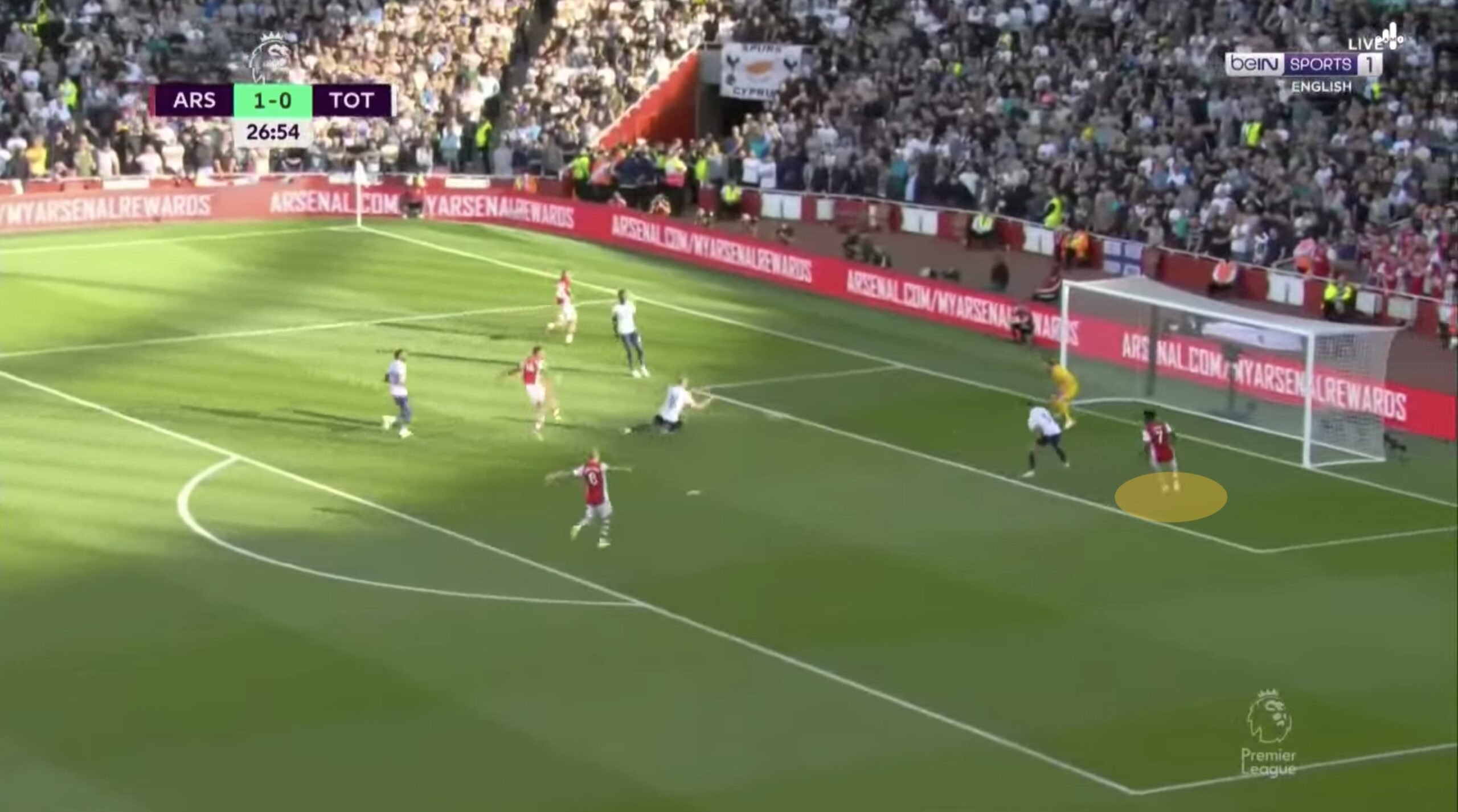 Smith Rowe’s movement for his goal was excellent and Saka was consistently in positions to capitalise himself, even though, oddly enough, Arsenal didn’t get into the Spurs box too often. You don’t really need to when you’re already three goals up after 35 minutes.

A big key to how successful Arsenal can be this season will be how many goals the players behind Aubameyang can produce and it’s huge to have Smith Rowe — who also missed big chances against Norwich and Burnley — and Saka off the mark. There are plenty of doubts around Mikel Arteta still but that’s three league wins in a row and if there’s one thing he has definitely coached successfully before, it’s how to get talented wide players scoring more often.