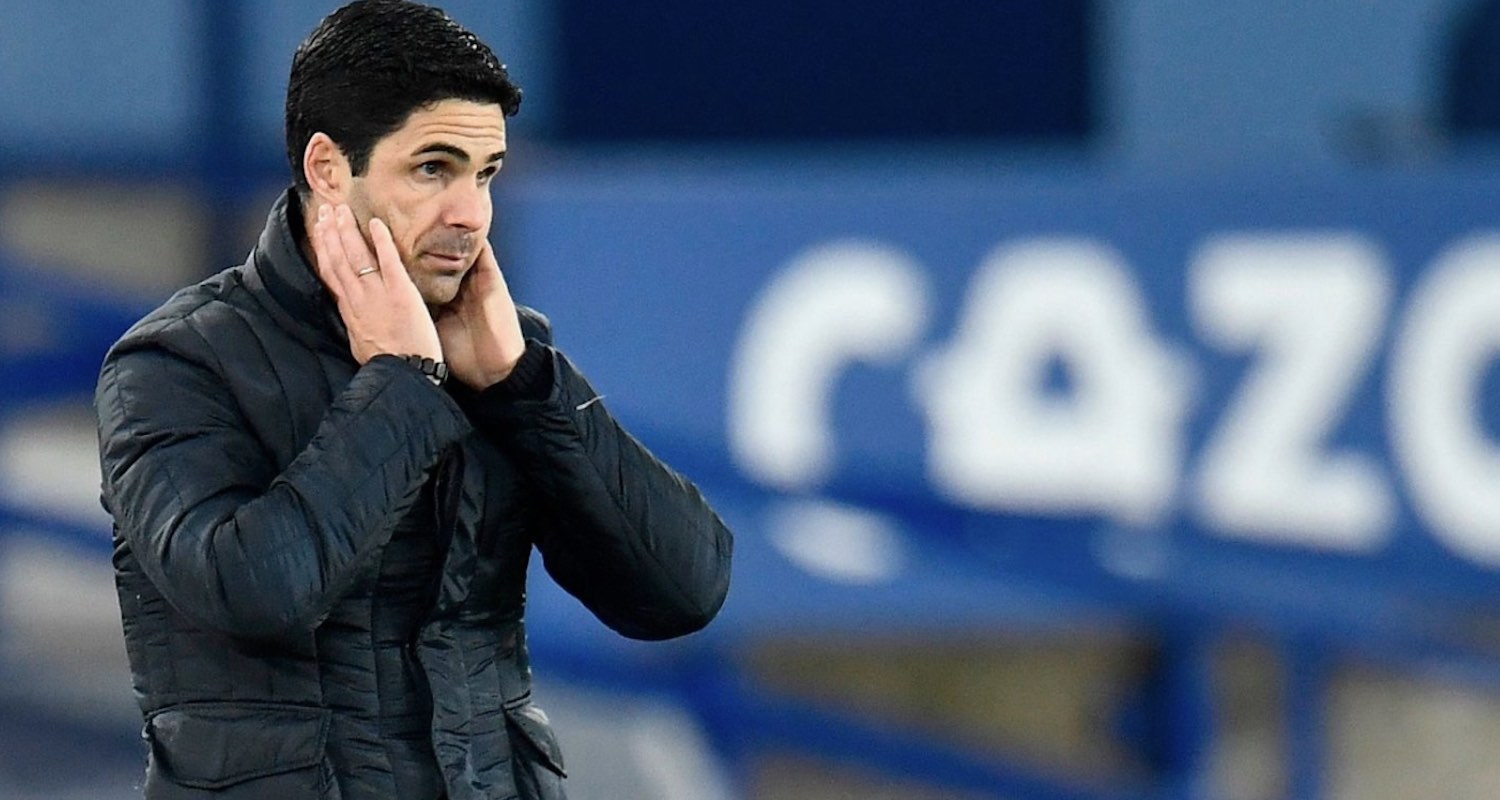 It’s rare for me to sit looking at a blank ‘page’ for as long as I have this morning, but I don’t really know where to start.

Our 2-1 defeat to Everton last night was our eighth of the season. We have won just a single game from our last ten in the Premier League. Mikel Arteta talks about ‘small margins’, reasons why we’re not gaining more points, and while he might have good reason to feel like he can focus on those, it’s not a particularly convincing argument.

Yes, we’ve had men sent off, but we could have avoided those with better behaviour. Yes, there was an own goal last night, but don’t bemoan the bad luck when a header flicks off a defender’s knee and into the goal, focus on what we didn’t do to prevent the cross coming in in the first place. You can’t talk how difficult it is to score against teams that play with a low block when we played that way against Everton out of possession and still conceded two.

It wasn’t until injury time in the second half that we had a shot on target. How on earth can you expect to win games when that’s the case? On Sky they put up a graphic of attacking stats, ranking each team since the last Interlull.

Arsenal have had 27 shots on target. Rank 19th.

It’s not bad luck. It’s the way we play. It’s the decisions we make. It’s what we tolerate and accept.

The absence of Pierre-Emerick Aubameyang last night was obviously a blow, especially as he’d just broken that long goal drought. Arteta continued with Eddie Nketiah up front, and played Willian from the left. The Brazilian’s first half infuriated me more than any individual performance for a long time. Sometimes a player is out of his depth, he just doesn’t have the quality to play for a team, but that’s a separate thing from what I saw last night.

I saw a player who has a track record of being decent at Premier League level stroll around the pitch like he just didn’t care. From the very start he showed zero intensity, he was careless and lacklustre, and I have never seen a player with such an uncanny ability to get out of the way of an opposition cross in my life. He’s coasting, picking up a huge pay packet, and comfortable knowing he’s gonna get picked every week. With each passing week his signing looks worse and worse. Maybe he’s a convenient scapegoat, being an ex-Chelsea player, but fans can tell the difference between someone playing poorly and someone who is taking the piss, and he is. Get him out of the team.

While I could easily go to town on him for the rest of this blog, what’s the point? He doesn’t pick himself. This one is entirely on the manager. Yes, Willian was better in the second half, but when you set the bar so very low that’s not praiseworthy, it simply highlights the dismal nature of his first 45 minutes. Those who would say we lack options, we could easily have played Hector Bellerin at right-back, put Ainsley Maitland-Niles where Bukayo Saka started, and played Saka on the left side of the front three. Maybe not ideal, but it has 0 Willian, which is a vast improvement for me.

The Brazilian was half-hearted defensively for their first goal, Iwobi’s cross found Calvert-Lewin and Rob Holding was unlucky with the deflection. Our equaliser came via the penalty spot, nicely tucked away by Nicolas Pepe after Maitland-Niles was fouled, but Everton went ahead just before the break from a corner. Credit to Calvert-Lewin who forced a good save from Leno, but we were weak in central midfield in the build up, Mohamed Elneny was  turned and shrugged off too easily from a Pickford clearance downfield.

The second half was a lot of huff and puff from Arsenal, a lot of possession, but few clear chances. I saw players hiding in plain sight, gesturing for passes while putting themselves in positions where they couldn’t receive the ball. Eddie struggled and should have come off sooner. Pepe wasn’t great either but that he was hooked and Willian stayed on was crazy for me, and the only real silver lining was the return of Gabriel Martinelli. It’s great to see him back, and while it was too much to expect him to return as the saviour last night, having another attacking option is a genuine positive.

Our end of game flourish, in which we really put some pressure on Everton was nice to see, but left me wondering why we couldn’t play the same way in different periods of matches. I understand that game state, and the fact there’s an element of desperation for both teams, plays a part, but even a little of that from the first whistle would be useful. In the end, Everton hung on to cap what has been a superb week for them. Wins over Chelsea, Leicester and now Arsenal have lifted them into second in the table, while we languish in 15th, looking over our shoulders at the likes of Brighton, Burnley and Fulham.

So, where do we go from here? I really wanted Mikel Arteta to be the right man for us, and I’ve fully supported the idea that someone has to sort out the mess at Arsenal because what’s happening right now is a consequence of years of mismanagement … and worse, but managers live and die by results. That is how football works. You can have great ideas and plans for the future but if you can’t win games, you will pay the price.

The fixture list isn’t kind, with Man City next in the EFL Cup and then Chelsea in the Premier League. As I said this time last week, this might not be rock bottom. There’s still some way to go. I cannot see the club making any kind of change now, but after that we have a run of fixtures which I think will decide Arteta’s future.

Brighton away, West Brom away, Crystal Palace and Newcastle at home. Win them, make some additions in the January window, and the mood could change. Without the right results in those games though, it’s difficult to see how he can continue. Arsenal may well hold their nerve and I dearly hope that it pays off because it hurts to see how badly we’re struggling right now. However, we’re already in the kind of territory where a rookie manager is going to have to produce an almost unprecedented turnaround as he nears the point of no return. Can you remember any manager going through a run like this before and making it right?

People reference Ralph Hasenhuttl at Southampton last season, where they lost 6 from 8, including a 9-0 defeat to Leicester, but he had experience to fall back on. Arteta has got David Moyes’ former assistant and some coaches in their mid-20s. At the very least he needs help. When there are some top football executives like Luis Campos and Ralf Rangnick available right now, Arsenal would be very foolish not to be touching base with them, because this club needs proven talent/experience to get back on track.

And yet, as I said to someone last night, the man who has the power at football level, the one who could make those recommendations etc, is the one whose job is on the line. Well, there are two of them, because Edu should be skating on the very same thin ice that Arteta is.

It’s a real mess, all our eggs are in one basket, and the basket is falling apart.