When I saw the teamsheet I was worried.

The only change from the North London derby was Mohamed Elneny in for Thomas Partey, and that was enforced by injury. Other than that, it was the same guys who had stupidly lost to the old enemy. I know that options are a bit limited right now, there’s no Nicolas Pepe because he’s still serving his suspension, and Reiss Nelson was not selected – I assume because of the head injury he reportedly picked up in training – but the same guys were given yet another chance in the vague hope they might be less crap than they have been for weeks.

It’s not like the defeat last week was a one off. It was our fifth in seven Premier League games. Some of these players didn’t not deserve to start last night, and Mikel Arteta’s apparently unshakeable faith in them is simply not warranted.

The first half was a bit rubbish. Burnley should have gone ahead in the 14th minute when Chris Wood headed wide from a few yards out with just Bernd Leno to beat. The defending was bad. There were some moments when Arsenal looked not completely terrible. Alexandre Lacazette’s poked shot after good build up was our best move of the half, and Gabriel headed wide from a Willian cross – more or less the same position he scored against Wolves from, but I don’t think we need to castigate a centre-half for missing a chance. Our problems run far deeper than that.

Here’s an example of one of our (many and varied) problems. Granit Xhaka, a central midfielder, drops back into the defence. He is deeper than both Gabriel and Rob Holding. Lacazette, nominally the number 10, is where a defensive midfielder should be, receives the pass, does well to get beyond one Burnley player, but then immediately passes the ball straight to the opposition. 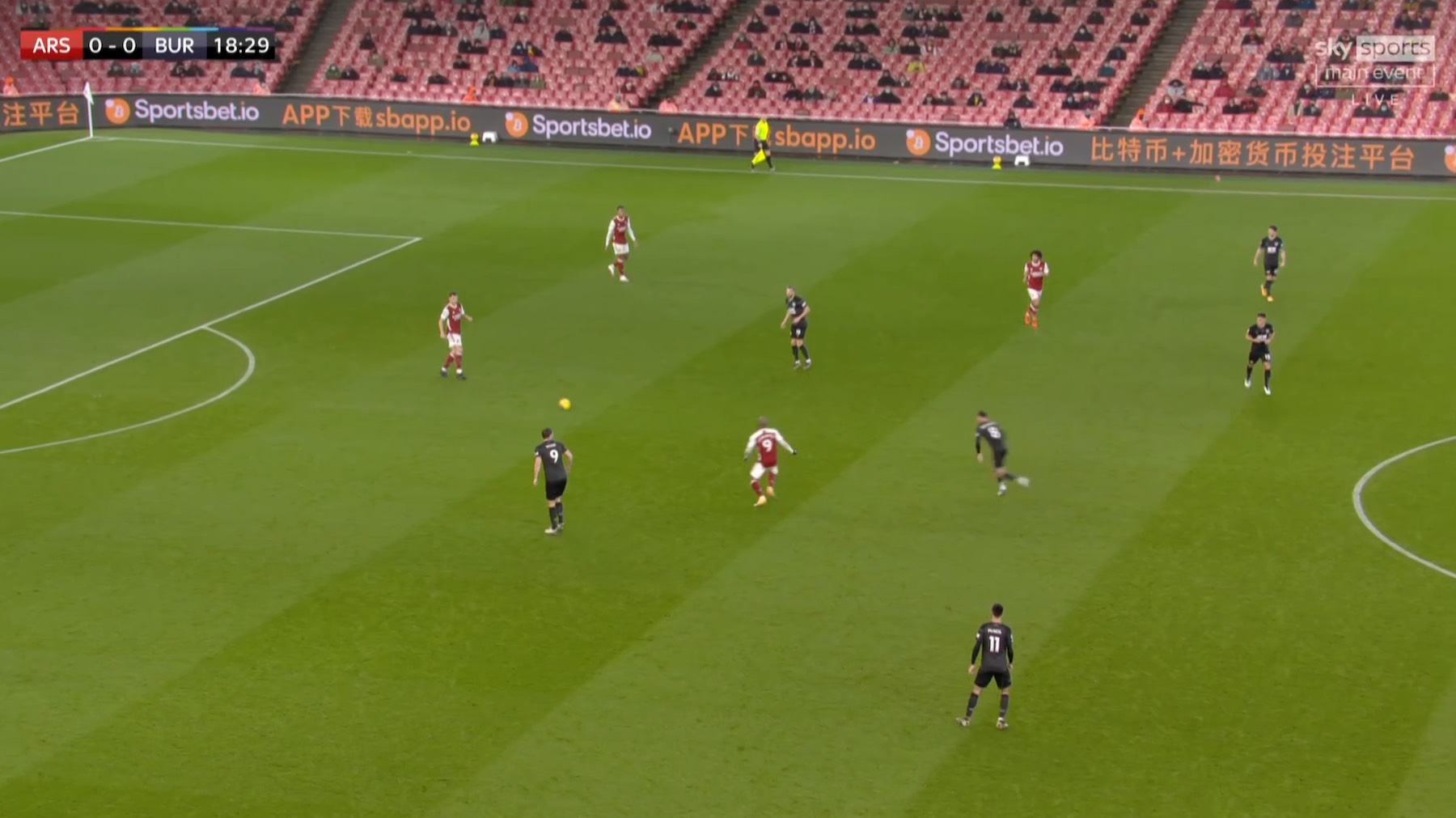 What are we doing? What is this?

I can’t fault Lacazette’s effort, and I don’t highlight this next bit to be critical of him per se, but what if we had a genuinely creative passer looking for Aubameyang in the situation below? 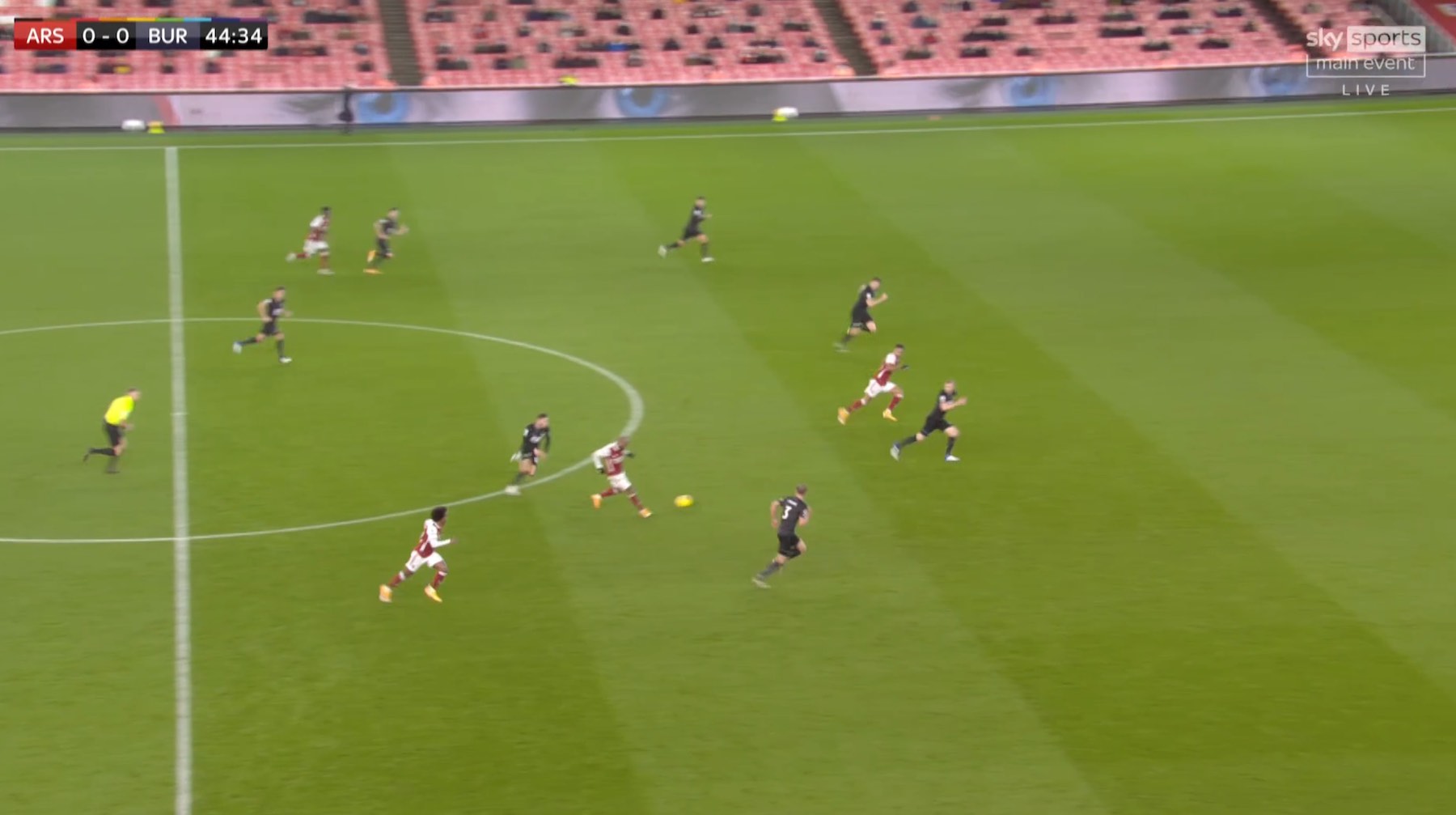 He’s being asked to play a role which just doesn’t suit him at this level. It’s one thing to be competent at it in the Europa League, but the step up – even playing against a team that had only won once all season in the Premier League – is too big.

The second half began brightly. I suppose there’s something quite typical of this Arsenal side that we made three decent chances, and two left footed players had to take shots with their right foot, and Aubameyang’s was a header (not his strong point), but there’s no question we were playing better and putting Burnley under some actual pressure.

Then, step up Granit Xhaka, King of the Idiots, Mayor of Moron Town, Captain Muttonhead. As someone who has often advocated the kind of foul he committed, I can’t criticise him for stopping a Burnley move by taking out the man in the opposition half. In fact, I thought that was good.

His reaction to the rest of it though? Idiotic. Take your yellow card and walk away. Instead, he got involved in some nonsensical pushing and shoving, and in the process took exception to an accidental trip, putting his hands on the throat of a Burnley player who was actually doing him a favour and trying to take him away from it all. VAR did what VAR does, the referee had a look and wiped out the yellow card and replaced it with a straight red.

It was so needless. It immediately killed the momentum we had been building and put us at a disadvantage in terms of numbers. In any context it’s unacceptable, but in our current run of form, and at that stage of the game, it demonstrated a selfishness that I just can’t abide. This fake hard-man bullshit is exactly that. It’s an act for his own benefit only.

“Oooh, look how much he cares.”

Bollocks. It’s utterly selfish. You can’t say it 100% cost us the game. We might never have scored because, you know, we never score any more, but it definitely made it much more difficult for us to win it. He’s now suspended for three games, and while I always want as many of our squad available to us as possible, I’m glad he can’t play. We should be looking to move him on in January, and this should be the straw that breaks the camel’s back when it comes to our reliance on him as part of our midfield. Enough is enough. You can say a manager can’t legislate for a player doing something that stupid, but when said player has a fairly solid record for doing stupid things, you can’t hide behind that excuse.

Ceballos came on for Lacazette, before Elneny was lucky not to see red/concede a penalty when he put his hands in the face of an opponent. His theatrics afterwards were pathetic. It’s like he looked at Xhaka and thought ‘I’ll try a bit of that myself’. I have no idea what he was thinking. If he was thinking at all.

Aubameyang’s struggles to score at the right end of the pitch made his own goal feel all the more 2020. That flicked header into his own net was enough for Burnley to take all three points, and to condemn us to a fourth successive home defeat. It’s the first time that has happened since 1959, which illustrates the scale of the problems we’re facing right now.

It’s my opinion, I can see it in training as well that they try and put the energy in. It’s the same today. A team that is struggling [like this] we don’t normally see play the way that they did today, and with the way they played against Spurs, the leaders, but again, we lost the game. We gave the opponent a chance and they scored. And it’s about winning football matches.

It is about winning football matches, and we’re not. We don’t look like we’re going to, and in circumstances like that, the manager is usually the one to take the fall. There is no defence or justification for our results and performances, but I will say this: even if the club were of the mind to make a change, it’d still leave us with too many players who just aren’t bothered. It’s 100% on Arteta that he keeps picking them, his belief in what they can do for him and the club on the pitch is his major failing, in my opinion.

But there are serious issues of quality and issues of character, and until we get rid of them too, we’ll never improve to any significant degree. One of the things I really wanted to see from Arteta was an environment in which there were consequences and accountability. There are obvious examples of that being put in place, mostly for behind the scenes indiscretions we’re not privy too. In those circumstances, you have to trust that the man in charge is making decisions for the right reasons.

However, when some players make familiar errors or behave on the pitch in unacceptable ways then just get picked again for the next game, you undermine that. Again, I know he’s not exactly replete with options, but unless there are some repercussions for playing badly, you create a comfort zone. The players aren’t worried about their places, and that’s not good enough.

I don’t know if this is rock bottom. It feels like there could still be a way to go. There will have to be changes for Southampton on Wednesday because Xhaka is suspended, so too Hector Bellerin after picking up his fifth yellow card of the season. We need more than that though. Obviously we have to pick a team that can at least have half a chance of winning the game – tough ask at this moment in time – but we also have to pick one that shows there are consequences to individual performances which are consistently, unacceptably, below par.

With Everton on the horizon too, it’s hard not to think back to more or less this time last year when Freddie Ljungberg was in temporary charge for the final time at Goodison Park.  He picked a clutch of young players, admittedly alongside some like Xhaka and Luiz, but the message was clear to Arteta as he watched from the stands. – these guys are your future. Here we are 12 months down the line, relying on too many of the same old disappointing bastards, and look at the league table and look at our form. If we can’t acknowledge the correlation, we’ll never make it better.

How exactly we stop the rot is the $64,000 question, but it’s got to happen soon because this runs dangerously deep now.