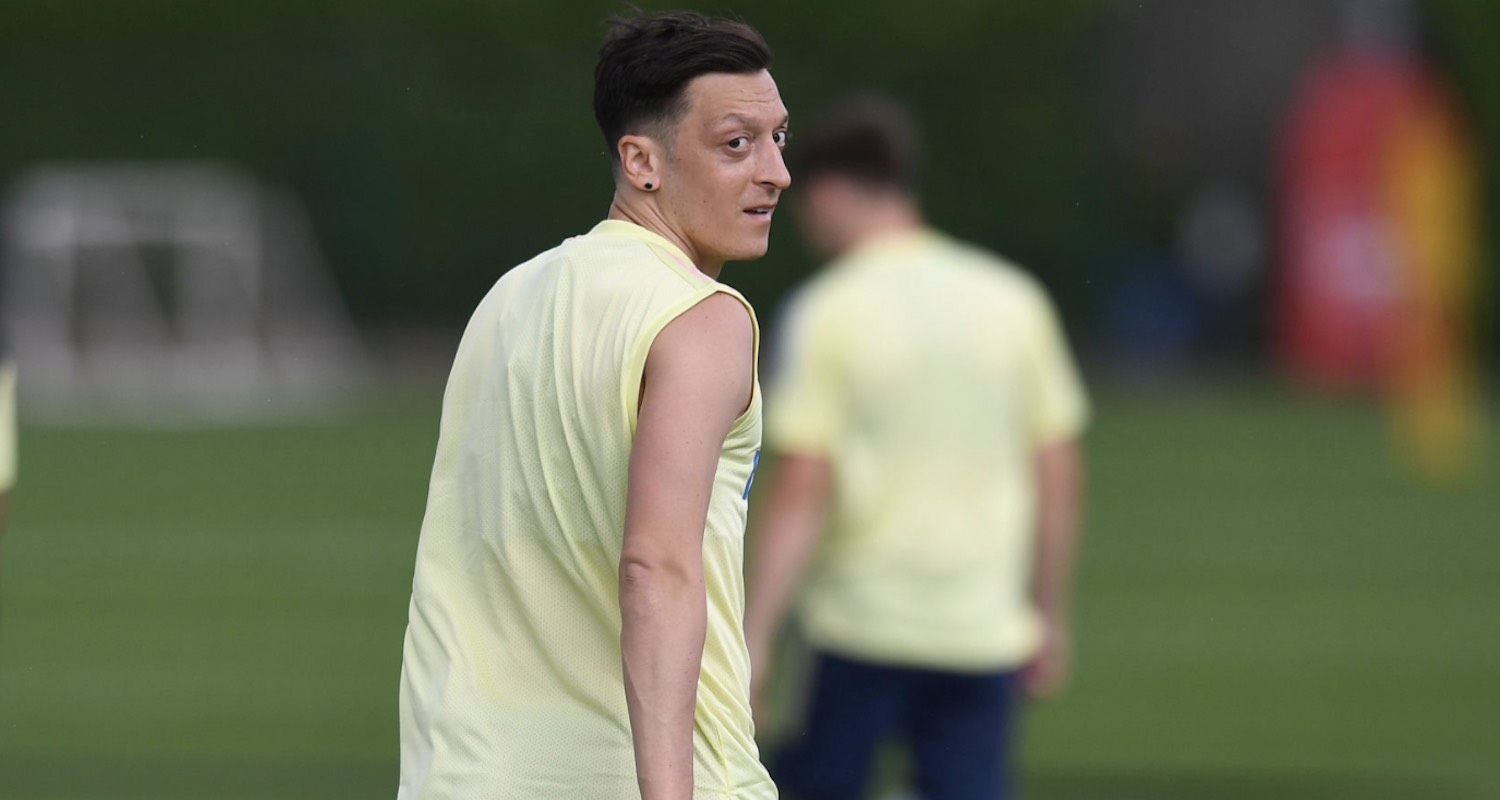 As expected Arsenal named their Europa League squad yesterday without Mesut Ozil or Sokratis in it. The restrictions on foreign players meant that Mikel Arteta had to choose two players to sit out our European campaign – a decision he has to make about our Premier League by October 20th too – and those were the two casualties.

It’s not a surprise based on what has happened this season. Neither player has been involved in a match-day squad, not even for the Carabao Cup, and there were efforts to move Sokratis on before the transfer deadline. It didn’t happen, but for some time it’s been obvious he has been some way down the manager’s pecking order.

When it comes to Ozil though, the lack of surprise doesn’t negate the fact it’s a big story, a major issue. He remains our highest paid player, in terms of stature and ‘star’ profile he’s miles ahead of everyone – only Pierre-Emerick Aubameyang comes close, and in response to the confirmation of his omission from the squad yesterday, the German posted a thank you to his 25 million Twitter followers for reaching that landmark.

So, where has it all gone wrong? I think the first thing to say is that this hasn’t been an overnight thing. The fact we’ve been talking about him and his situation at the club for so long means this has been a gradual decline, this has developed over time. In some ways it goes back to Arsene Wenger who was always willing to give Ozil extra considerations that others didn’t get. The Aaron Ramsey answer in this Soccer AM video obviously isn’t 100% serious, but it’s informative nonetheless. He’s asked who is the teacher’s pet:

Probably Mesut. He gets a few extra days off than the rest of us. He’s always in the boss’s room asking for something … and he seems to get it.

Under Wenger, Ozil was indulged, no question about it, and that’s not to be critical. If we look what has happened since the former boss departed, it seems apparent that this is the way to manage the player if you want to get the best out of him. He is the classic ‘arm around the shoulder’ player, not the ‘kick up the arse’ one. Where you stand on someone getting special treatment that others don’t receive is up to you, and I know there are other considerations when it comes to the team, its stability and so on, but Ozil was at his most productive under Wenger. All the same, we saw the start of his not-so-mysterious absences for those tricky trips up north, which have in some way laid the groundwork for where we are now.

In a team sport you need everyone to pull together, you need to feel like everybody is pulling their weight and up for the fight, and if it gave the impression that he didn’t fancy the more physical games, there was probably some truth in that. If Unai Emery arrived with doubts in his mind about the star player, it was in some part because of what came before.

The Spaniard tried to implement a strict level-playing field, nobody would be given special treatment, and within just a few weeks of his arrival he and Ozil were at odds. The player reportedly stormed out of training after learning he was going to be on the bench for a game against West Ham, and it spiralled from there. Emery never had the strength of character to manage the situation with consistency, and when he needed more in his team, he relented, Ozil returned, and the manager looked weak. Expediency won out, but when you’re trying to demonstrate your authority to a dressing room it’s going to cost you, and that was certainly the case with Emery.

Freddie Ljungberg managed us for five games, and even in that short period there was an incident with Ozil, and now – having featured regularly under Mikel Arteta – the third manager in a row has had an issue. There is only one common denominator here, but exactly why we are where we are is a question nobody really has the answer to. Of course there’s a lot of speculation about it.

Is it because of Ozil raising the horrendous plight of Uighur Muslims in China? Well, he Tweeted about that in December 2019, before Arteta was even officially named manager, and since then played 12 games for us, so I don’t think it’s that. Arsenal’s distancing themselves from his comments was extremely poor form, but I don’t think the financial ties and commercial interests there are such that this has anything to do with his current situation. Not least because it doesn’t match the timeline.

Is it because he refused to take the pay cut? Some will argue there’s a direct connection between the fact he’s not been in the team since then, but it ignores the fact he did make the squad as an unused sub for the first couple of games after the restart. Also, despite the fact Ozil was the only player publicly outed as not having taken the cut – an unfair leak against him in my opinion – he wasn’t the only one. There were two other players who refused it, and both of them play regularly, week in, week out, since football got going again. So that doesn’t really add up.

Is Mikel Arteta being forced by those on high to leave Ozil out? Some said it was Raul Sanllehi passing down this very dictate, but Raul is gone and Ozil is still out in the cold. It’s very clear that there are tensions between the club and the player, but I can’t get my head around the idea that Mikel Arteta would have his team selection dictated to by anyone at boardroom level. His job is to win football matches, he will pick the players he wants to pick, and for me that’s the bottom line on this one.

Ultimately, I don’t think it’s any one thing. I think it’s a combination of issues and circumstances. A player in decline under a manager who is strong enough to demand the ‘non-negotiables’ from everyone in his squad, regardless of their stature or pay-grade. If that means leaving out a former teammate – a player whose talent and ability he, as much as anyone, knows fine well – then so be it. As much as he has to operate in the here and now, a big part of his job at Arsenal is to build something for the future too, and a 31 year old in the last 9 months of his contract doesn’t fit into that.

And here’s the thing: I firmly believe that Arteta would have preferred to have that talent and experience to call upon during the end of last season, and even now. Yet he has to make decisions for the greater good, sometimes you have make difficult ones, to sacrifice certain things to implement your ideas and to cement your position as manager. I think this is one of those times.

So, what now? Well, for all the criticism, Arsenal gave Mesut Ozil the contract they did. He is as entitled to be paid, the same way as you or I, or any player is when they’re given a deal by a football club. Whatever happens, Arsenal are going to have to pay his wages. However, if he’s not going to play in Europe, and – as seems likely – he’s not going to be included in the Premier League squad – surely it’s now time to sit down and sort something out.

It’s not healthy for Arsenal, or Ozil himself, to remain embroiled in what is a toxic break-up playing out in full glare of the football world. Nobody needs for this to go on until next June when it will come to its natural end. Even if he is left out, his presence at training etc, will ensure that this remains a situation which could spark into life at any moment, with a click of a social media team’s mouse.

How realistic that is, I don’t know. I just think it’s an awful shame that the Arsenal career of a wonderful footballer, whose arrival so excited us in 2013, is coming to an end in this way. It’s sad. It’s ignominious. And for everyone concerned, surely the best thing is to try and find some way to make it amicable before it becomes even more rancorous.

Righto, I’ll leave you today with episode 600 of the Arsecast, which features an interview with the former Gunner Nicklas Bendtner. Enjoy!