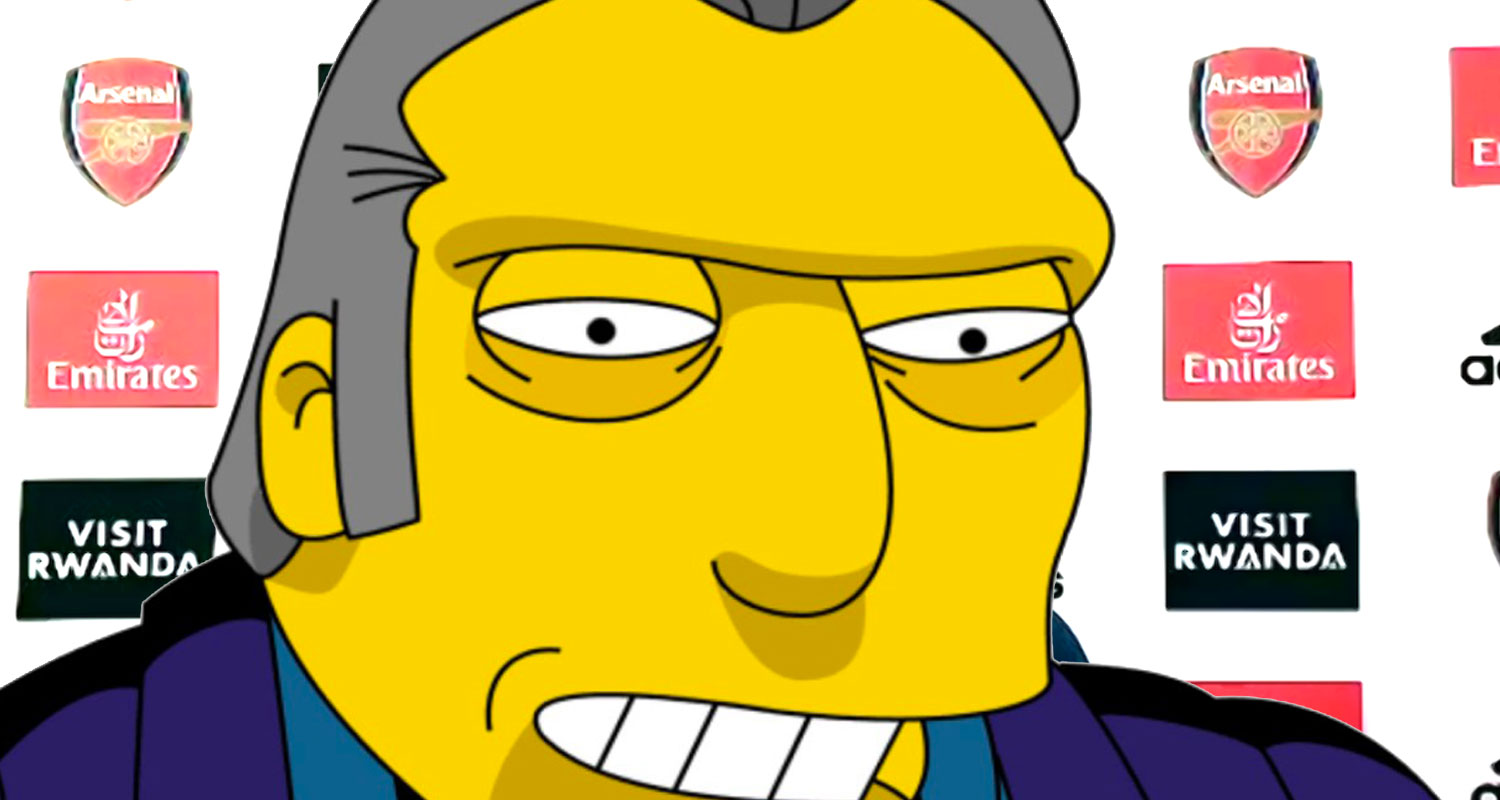 I was watching Mikel Arteta’s press conference yesterday, and listening to him being asked questions about transfers. It occurred to me, as he gave nothing away whatsoever beyond the admission that we’re still in the market for players, that the Arsenal manager is Fat Tony from The Simpsons.

Ok, he’s not fat, he’s not called Tony, nor is he a caricature of a mob boss, but his complete unwillingness to talk about transfer business in any way is very similar to the way Fat Tony operates when being questioned by Chief Wiggum.

Journalist: Do you have any news about Lucas Torreira’s departure.

Arteta: No, we don’t have any updates on Lucas or any other player at the moment.

Journalist: What about links to Jorginho.

Arteta: We are still open to improve our team, we are looking for different options depending on what happens with some of our players here so we are getting prepared just in case we need to do something.

Arteta: Sorry, but I cannot talk about players that play for a different team.

Journalist: It’s a position on a football pitch?

Ok, the last couple might have been made up, but no matter how hard they try, he will not give anything away in a press conference. It’s like Arsene Wenger on steroids. The former boss was long enough in the game that he might occasionally give a snippet of info, or a semi-smirk which was enough for people to say ‘LOOK! WHEN HE SAYS THERE’S NO TRANSFER NEWS HE VERY SLIGHTLY SMILED AND RAISED ONE EYEBROW. FROM THIS WE CAN EXTRAPOLATE THAT STORIES LINKING US WITH A TRIPLE SWOOP FOR SEBASTIEN FREY, HATEM TRABELSI AND SALOMON KALOU ARE TRUE AND ALL THREE WILL BE SIGNING IMMINENTLY.’

This was before the days of social media when such high quality investigation would result in 13 million Tweets to the @arsenal account saying ‘ANNOUNCE FREY! ANNOUNCE TRABELSI! ANNOUNCE KALOU! ANNOUNCE ANYONE!’

Now, despite questions from the press, a trillion memes and GIFs, and a man standing outside the house of the poor chap who runs the @arsenal account with a homemade sign saying ‘A NONCE PARTY’ – leading to entirely the wrong kind of people being attracted to the neighbourhood – Arteta is giving nothing away.

Maybe there is nothing to give away. Maybe we’re not close to signing anyone or selling anyone, but he’s just not willing to play that game. He wants what we do as a club to be discreet – as much as transfers can be these days with so many avenues for information to leak out. It’s hard to keep things under wraps when The Arsenal Wombat on Twitter notices that the brother of the girlfriend of a player we’re reportedly interested in has followed a man whose cousin’s company manufactures the boxes for the Arsenal Membership packs, but there’s nothing you can do about those external things.

From inside, Arteta’s Arsenal are going to play their cards as close to their chest as possible. Wenger’s classic ‘If we have some news, you’ll be the first to know’ is overdue an airing, and to be perfectly honest, I think it’s good. It’s the right way to operate because there are so many layers to transfer deals that even if a manager said something in good faith, it’s possible that a complication could make a ‘lie’ of it down the line. There have been countless occasions when players have been 99% in, and 99% out the door, but at the last minute something has happened which nixed the deal.

If rabid speculation about potential arrivals and departures is your thing, it’s not as if there aren’t countless outlets you can go to for that. If not websites and newspapers, then Twitter accounts which specialise in transfers. Some of them have good info, some of them are literally just wankers sitting in their pants making stuff up for likes and RTs, but then it’s up to you to decide who is worth your time/follow or not. If you can’t be arsed with any of that, it’s easy enough to filter out. And when there’s actual news, when something has happened 100% – then it will be rock solid from the official channel, or the manager if he decides to go with it.

In the meantime, with the transfer window hurtling towards its inevitable SLAMMING SHUT, Mikel Arteta needs to channel his inner Fat Tony again. As Josh and Stan Kroenke stand there wondering why the Arsenal boss is standing at their front door, he speaks:

“I’m afraid I must insist. You see, our fans, they have been most vocal on the subject of the transfer monies. ‘Where’s the money?’ ‘When are you going to get the money?’ ‘Why aren’t you getting the money now?’

Till tomorrow. I’ll leave you with a brand new Arsecast, listen/subscribe below.

Willian – it was really (nothing) … er … not very much