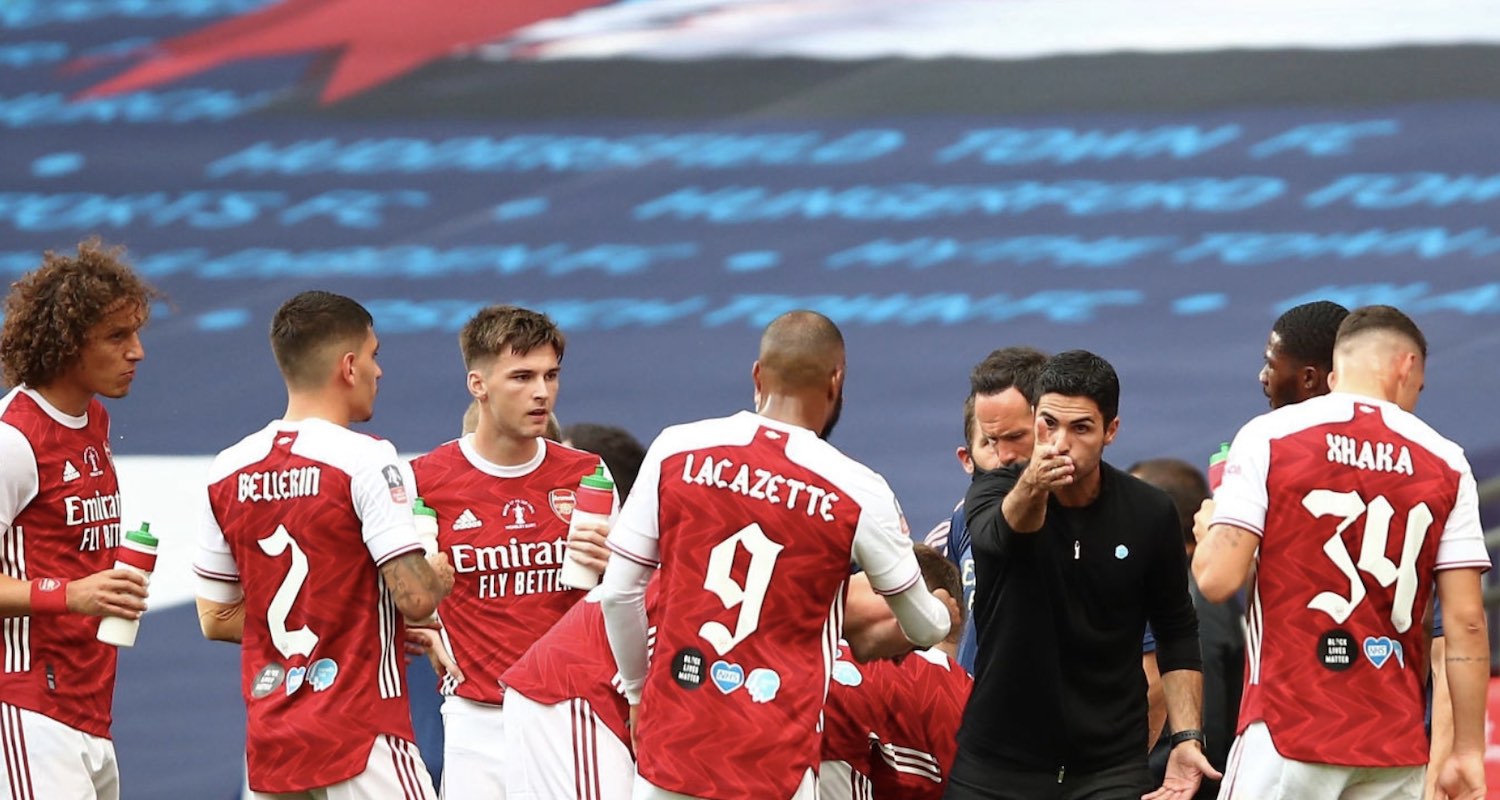 “We have to take into account that all of this is like a whole new language to them,” said ex-Pep Guardiola assistant Domenec Torrent just weeks into their time at Bayern Munich.

Learning a new way of playing, one without conventional positions but more flexible and interchangeable interpretations of roles and duties, does indeed sound like a pretty complicated concept. For Arsenal and Mikel Arteta, Saturday’s 2-1 FA Cup final win over Chelsea was not just a fine result, but maybe the clearest indication yet that these players are getting to grips with Arteta’s own footballing language. At the very least, they’ve nailed the alphabet.

Against the ball, Arteta opted for the sort of 3-4-3 style shape we’ve become accustomed to, with the only real question mark before the match hovering over the left wing-back role. It went to Ainsley Maitland-Niles, who performed so well in the semi-final. Talking about how Arsenal actually line up under Arteta, in terms of the shape of the side, is becoming an increasingly interesting challenge and this one was no different. 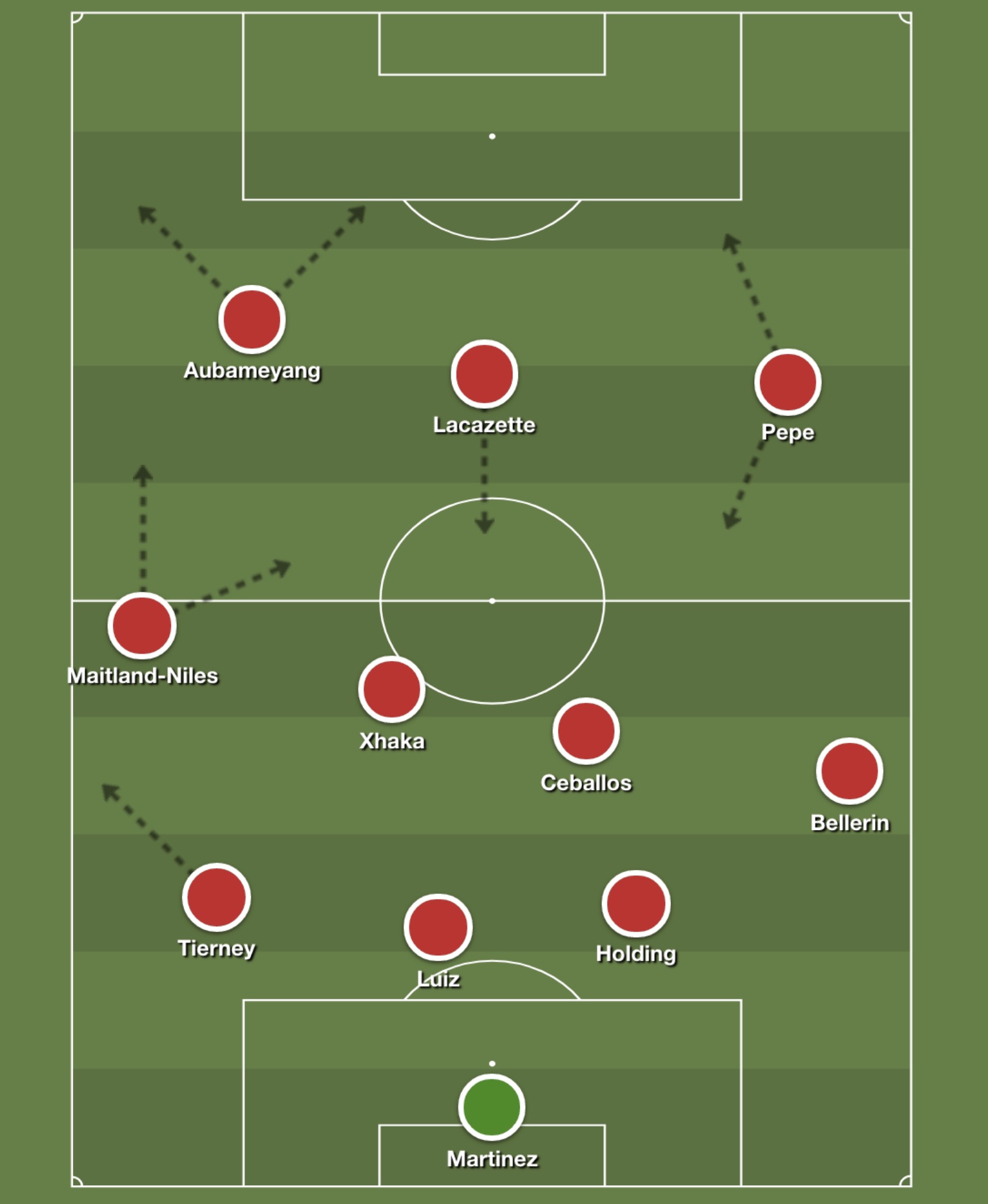 Chelsea matched us up with a 3-4-3 of their own. In some ways their shape was much less rigid – Christian Pulisic and Mason Mount essentially played free roles just behind Olivier Giroud, drifting from one flank, into the middle of the pitch, and across to the other flank – but in other ways, Arsenal were the much more flexible side.

It was the Gunners’ ability to adapt to Chelsea’s gameplan, and Frank Lampard’s inability to react to what Arsenal did differently, that ultimately meant Mikel Arteta went home with the FA Cup in his hands.

In the early stages, Chelsea’s fluid front three caused all sorts of problems. With Arsenal looking to press high, Dani Ceballos and Granit Xhaka were under instruction to man-mark their opposite numbers Mateo Kovacic and Jorginho. In previous games it’s fallen on Alexandre Lacazette to man-mark an opposition midfielder, but Chelsea’s shape meant the formations mirrored each other and Arsenal’s front three pushed onto Chelsea’s back three when they were building up. The problems came further back for Arsenal, were Mount and Pulisic drifted into the gaping space between Arsenal’s backline and midfield. Early on this caused major issues, with either of the Blues’ attacking midfielders often open to receive the ball, turn, and run at the defence. 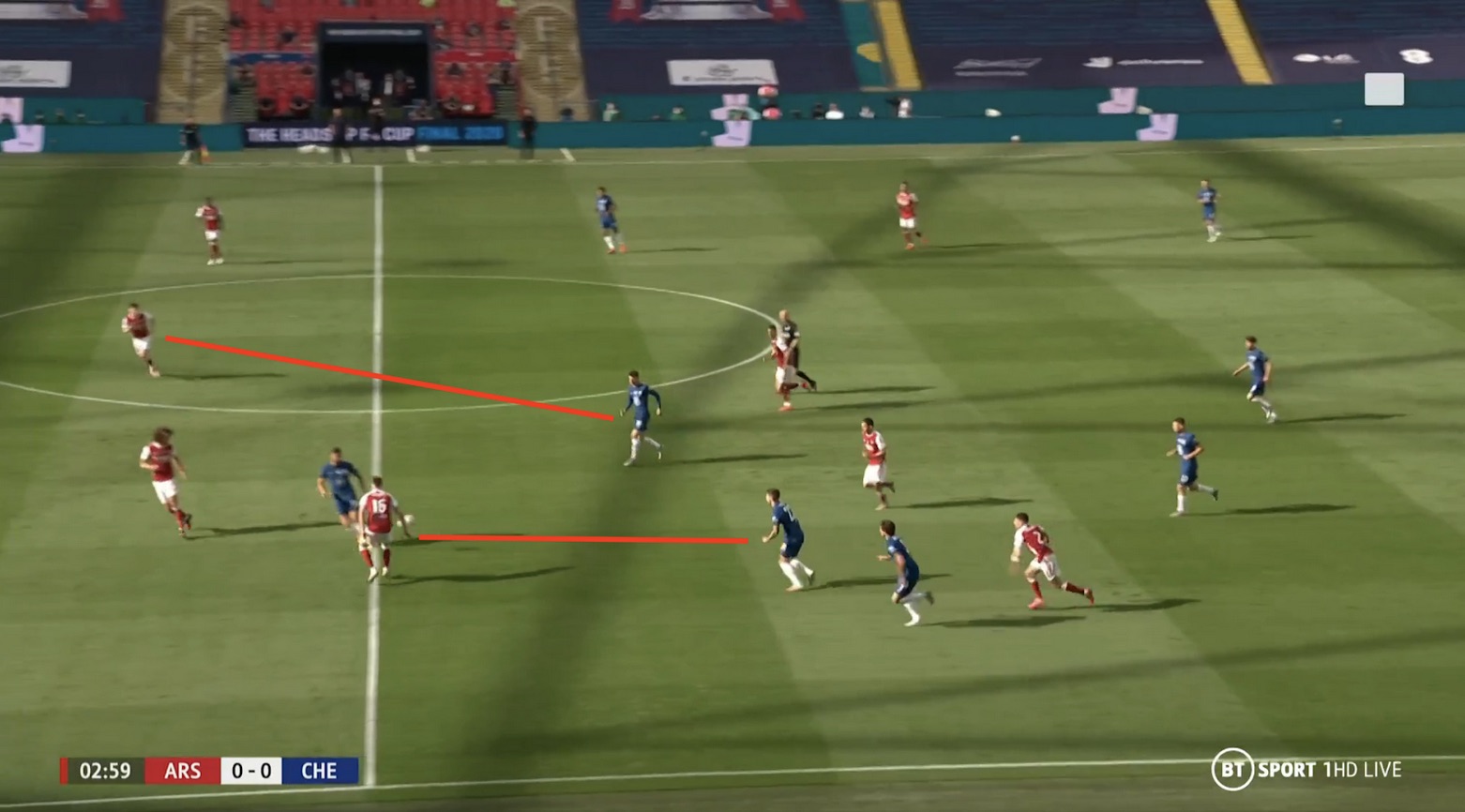 There were very early warning signs but Arsenal didn’t adapt and Chelsea made them pay, exploiting that gap between midfield and defence to feed Christian Pulisic, who brilliantly ran at Arsenal and created his own opening goal. When Pulisic received the ball, Rob Holding and Kieran Tierney didn’t even look to engage him. Holding (circled below) is focused on getting back in alongside David Luiz, even though he isn’t really needed there. 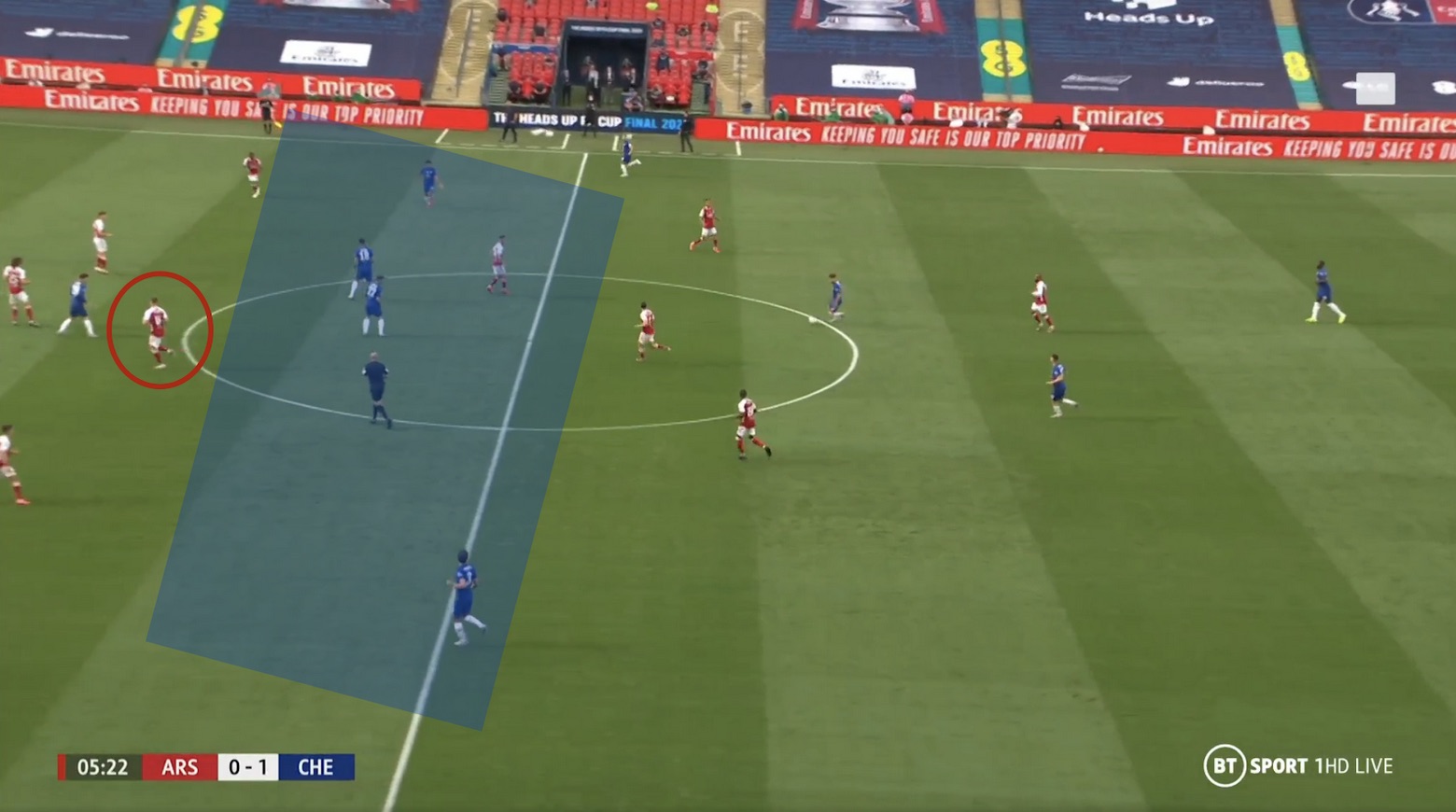 “They just caught us a bit flat-footed, it took us a little bit to get used to how they were playing,” Rob Holding said to BBC after the game.

“But then once we got it settled I think we grew into the first half and had the better of that half.”

Arsenal responded quickly and responded well by making a couple of changes. One was more pressure on Jorginho and Kovacic as they received the ball from the back, not allowing them to turn. More crucially, the wide centre-backs, especially Kieran Tierney, stuck very tightly to their men, supporting the press and now allowing those gaping holes between defence and midfield to emerge.

Chelsea weren’t allowed to turn and run at Arsenal in the centre of the park anymore. Indeed, there was no space for it. Tierney in particular was aggressive and snappy while never leaving himself exposed to a quick turn. And he adapted to the challenge almost instantly, learning from the goal. The image below is just a couple of minutes after the opener. Chelsea were in front but even then, they didn’t have the same impact on the game they had managed to exert in the very early stages.

Tierney followed his brief to the extreme. Not only did the Scot follow Mount out of the backline but he often pushed up far beyond Maitland-Niles, who retained his place in the backline to cover for Reece James. In the two examples above you could almost mistake Tierney for either a central midfielder, pushing up alongside Dani Ceballos to keep Arsenal compact.

While less aggressive, Rob Holding also stuck tighter to his man. But the extreme to which Tierney followed the attacking midfielder on his side underlined the change from the opening moments; this was no time to stand off or let Chelsea dictate the game and Arsenal had to be more aggressive to stop the Blues from finding those spaces that made them so dangerous early on. 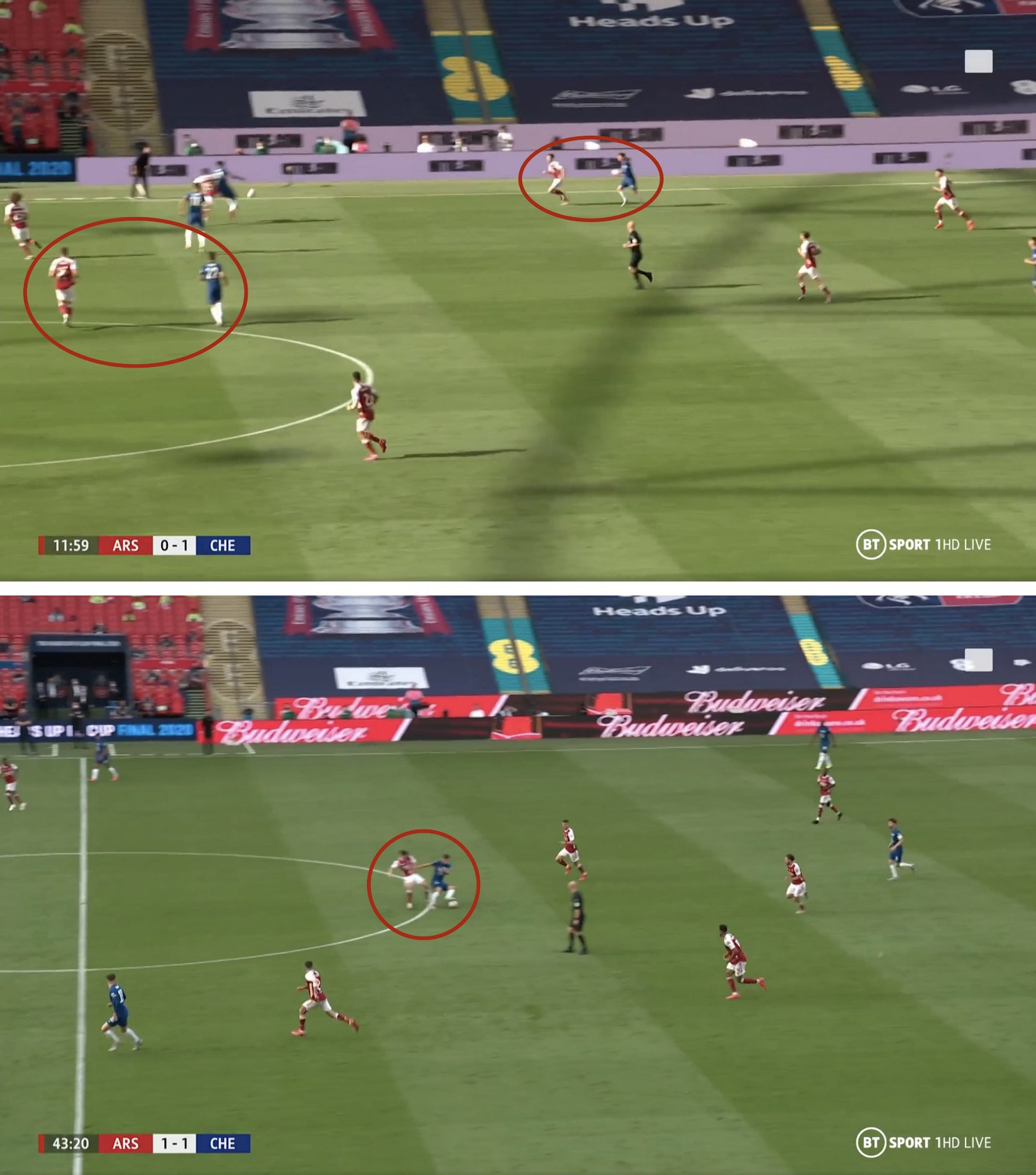 Indeed, in some cases that meant Tierney – playing centre-back on paper – could be seen chasing back with four or five Arsenal players behind him. The team mixed discipline with their aggressive approach and it paid off; Chelsea didn’t have a single shot on target after the opening 10 minutes.

While the change was more noticeable with Tierney, who has the recovery speed to make up for any positional errors, Holding also engaged his man higher up the pitch and deserves credit for it on an afternoon where he was far from the best Arsenal performer. 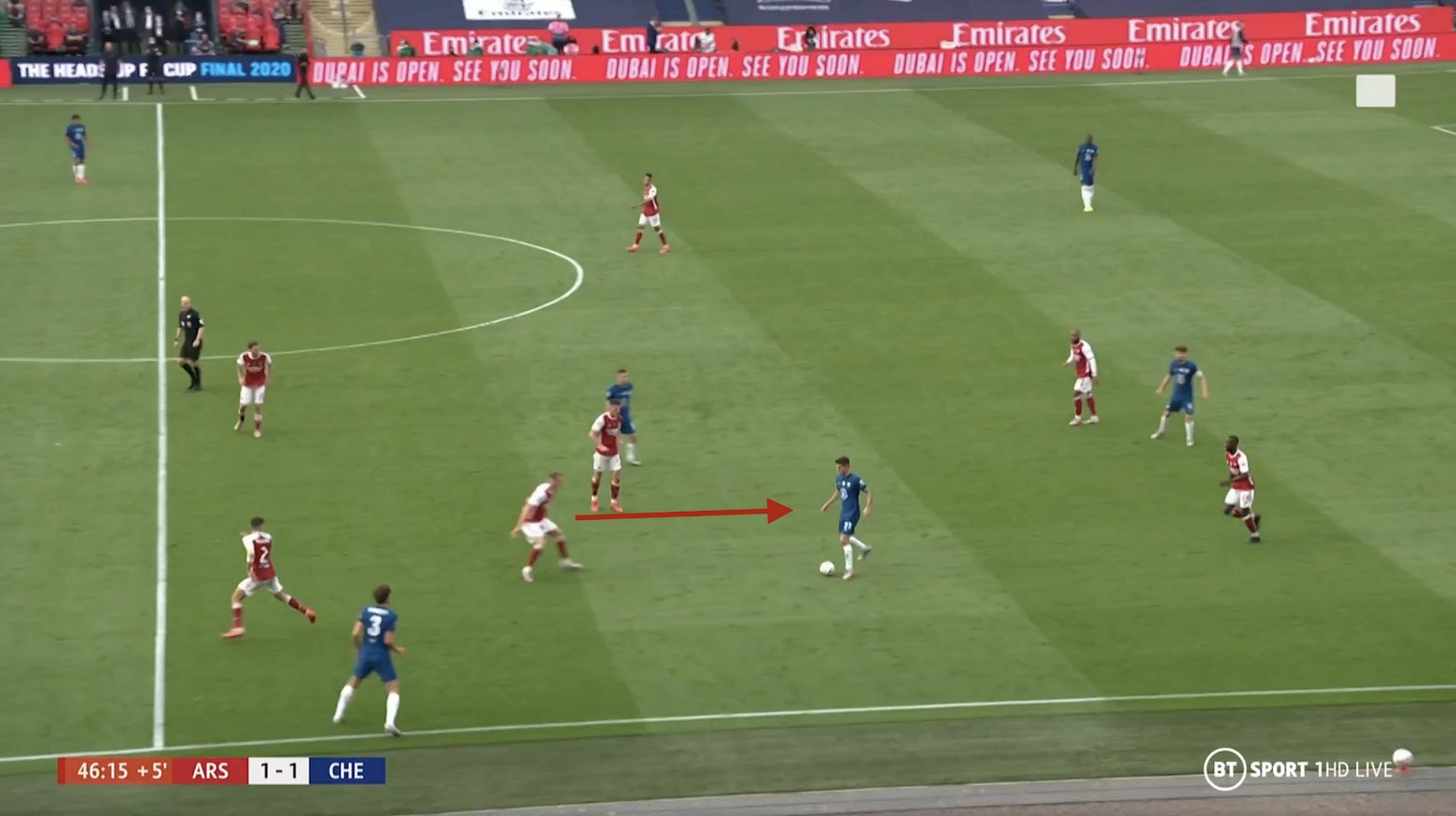 But you can get too tight when playing man-to-man, and losing an individual battle when you do defend that way can be costly. That much was clear early in the second half, when Pulisic and Pedro both turned Holding to create dangerous opportunities. At least when Pulisic spun the defender to go through, Arsenal were fortunate enough that he was struck down by a hamstring injury.

If losing your individual battles is one risk of playing man-to-man, the other big one is how easily your shape can be manipulated. Arsenal did just that to Chelsea to take away their ability to press high. After Granit Xhaka had been robbed by Mason Mount in the early minutes of the game, almost leading to a goal, Mount wasn’t really seen pressing Arsenal centrally again as Arsenal shifted shape in possession and the Englishman was dragged out wide by Kiernan Tierney’s positioning.

As I said at the top, Arteta’s Arsenal can’t really be defined by a general formation, at least not most of the time, and we saw some pretty extreme examples of that at Wembley. With Mount following Tierney to the flank, Arsenal pretty much played with a normal back four, at least when building up from deep. 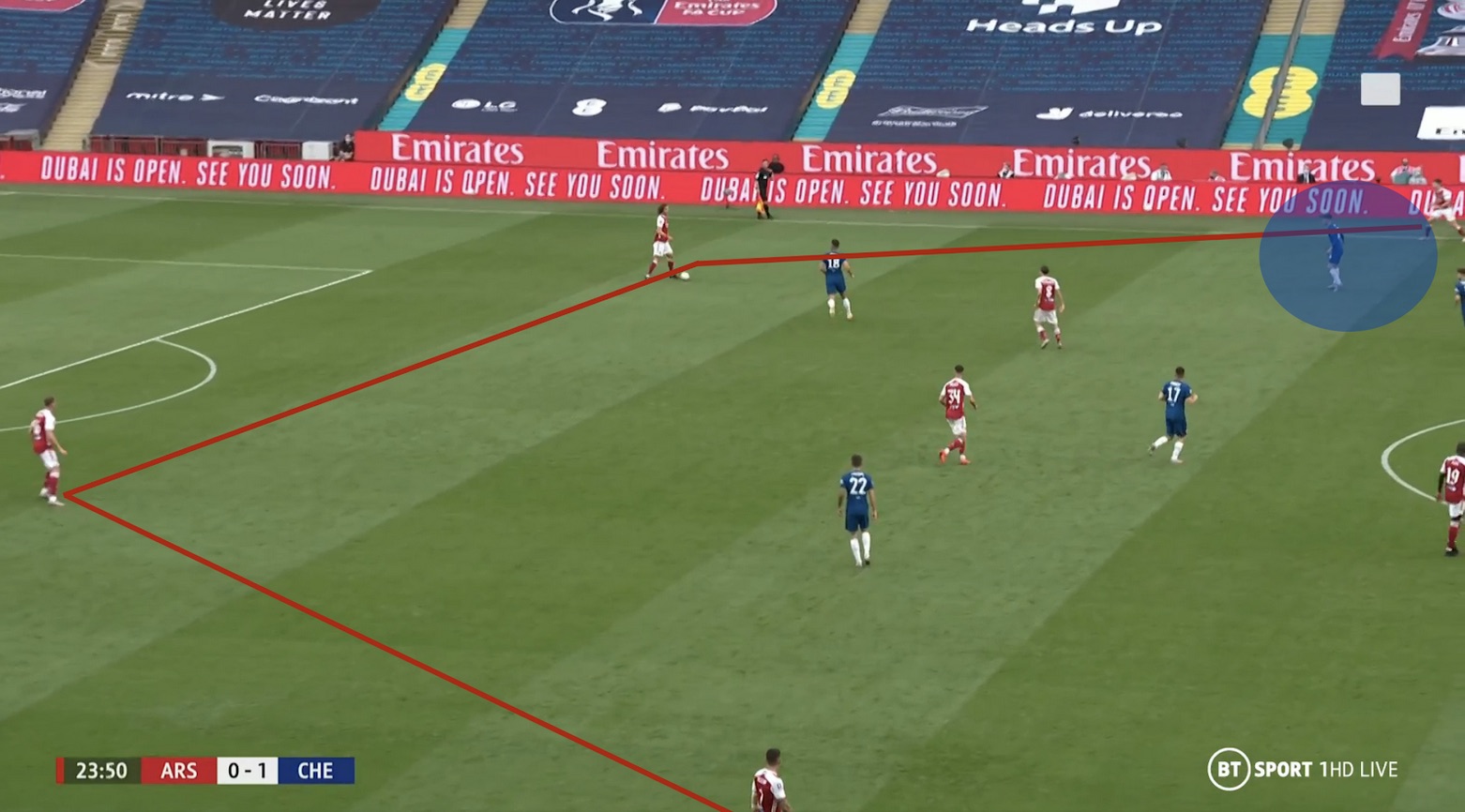 Pep Guardiola’s influence on Arteta is clear to see. Arsenal are getting good at shifting between different shapes in a single move and with players with the versatility of Tierney or Ainsley Maitland-Niles, the manager has plenty of options at his disposal without having to make a sub.

Playing their traditional positions so loosely, Arsenal shifted shape to stretch Chelsea both horizontally and vertically. One plan that became clear very quickly was to invite Chelsea on before playing a long ball over the top, targeting Chelsea’s right-hand side where Cesar Azpilicueta and the attack-minded Reece James came up against Maitland-Niles and Pierre-Emerick Aubameyang.

Arsenal found success with long aerial passes to those two in behind the defence regularly in the first half, including once in the very opening two minutes and the penalty call. 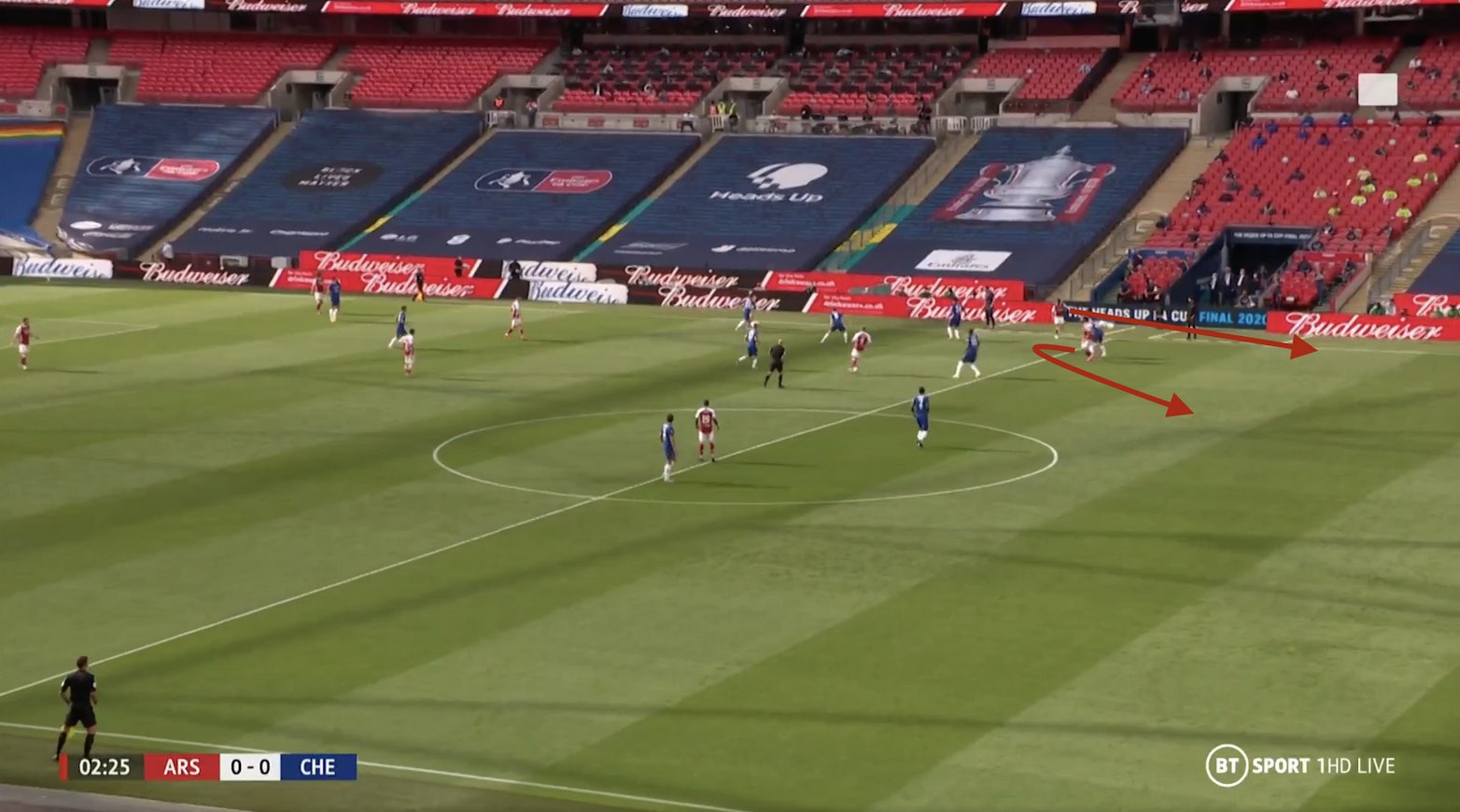 And those are just the most promising examples. While we’re on the topic of Kieran Tierney’s passing, take a moment to remember this ridiculous ball to Pepe. I don’t want to analyse it, I just want to remind everyone it was absolutely gorgeous. 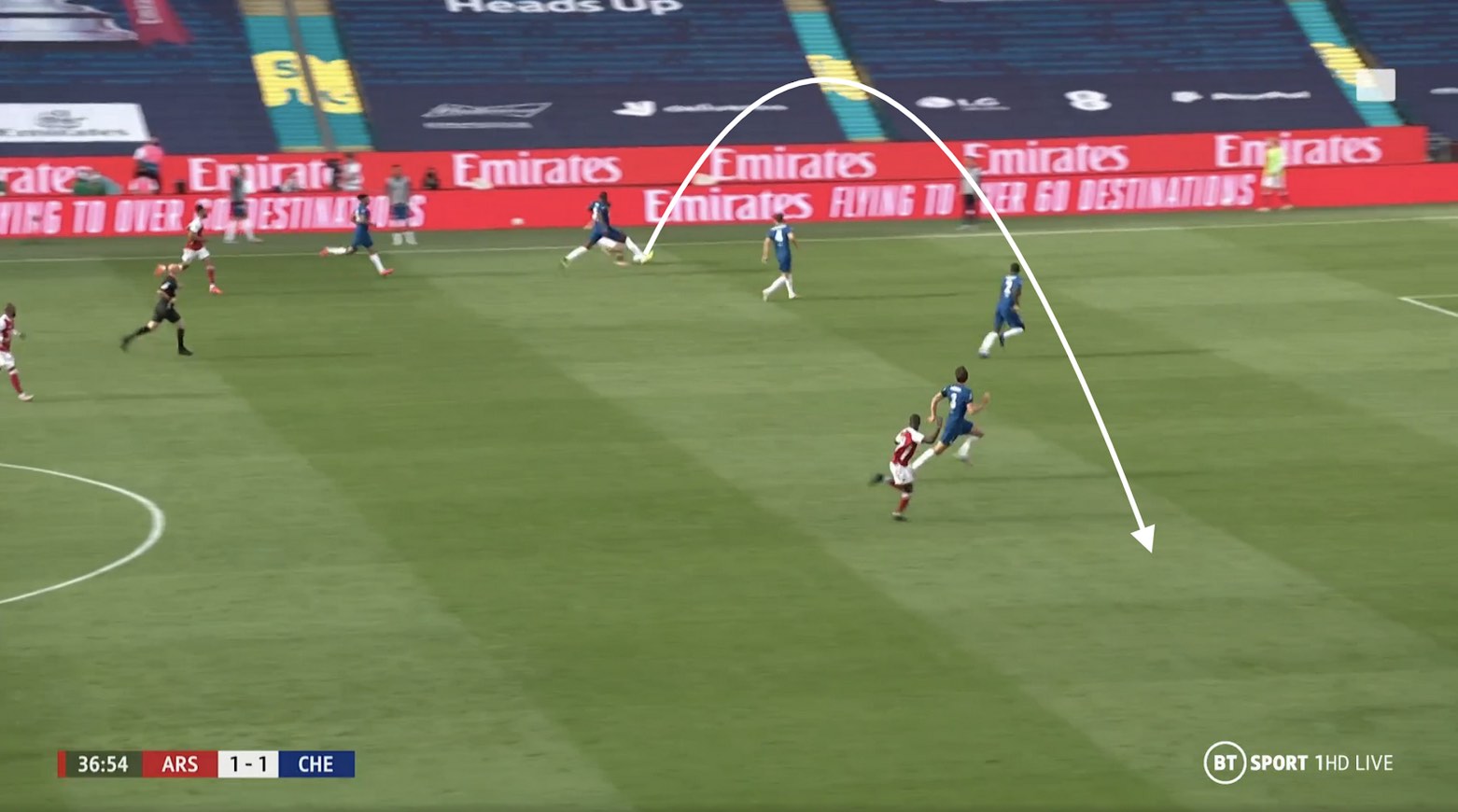 Anyway, these long balls were only so effective because Chelsea tried to press high. Even then, Arsenal mitigated the risks of playing it short by manipulating that press so well. As I already mentioned, Tierney’s positioning dragged Mount out of the centre. But then what? The teams could still match up pretty much 1v1 over the field.

Well, Arsenal’s use of Emi Martinez and interesting positioning meant Chelsea never really managed that. Using the goalkeeper in possession is crucial against a team pressing high, allowing you to outnumber them or force them to over-commit. The space in behind them has to exist before you can exploit it. With Xhaka and Ceballos dropping in between Holding and Luiz, Chelsea were left with questions to ponder. Let Arsenal play out? Or keep pressing? They tried to keep pressing – look how high Kovacic and Jorginho are in the picture below – but to no avail. Meanwhile, Pepe and Maitland-Niles crept inside to utilise the space. 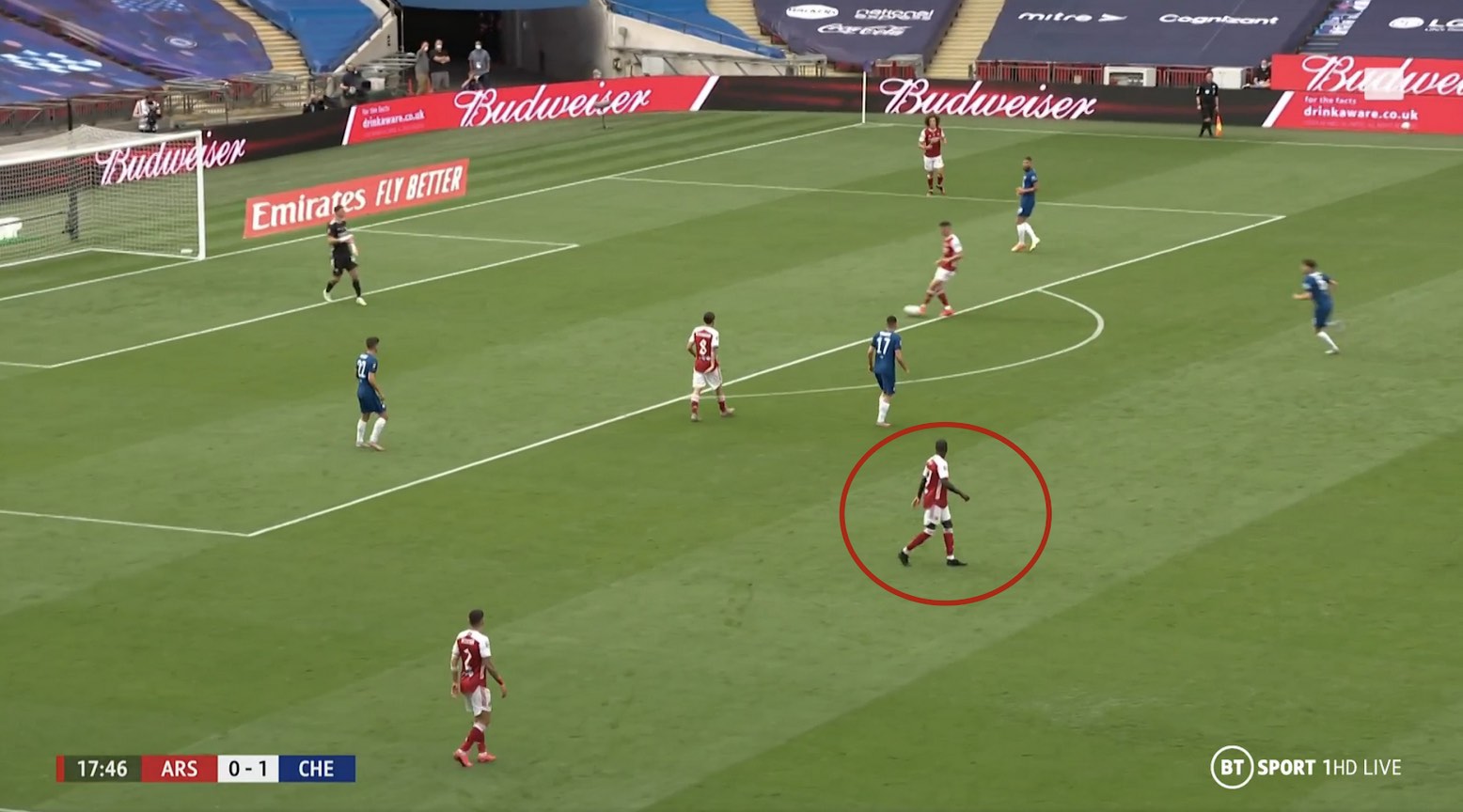 Mount isn’t even in the above image because Tierney (out of shot on the left flank) has dragged him away. Moving inside, Pepe helps Arsenal outnumber Chelsea centrally and leaves them with a difficult choice to make. Do they leave him open or do they risk one of their defenders playing 70 yards upfield to mark him? In that case, Pepe ends up roaming in that space across the pitch, just as Pulisic and Mount did to cause Arsenal issues early on, and almost slides Maitland-Niles through on the left. 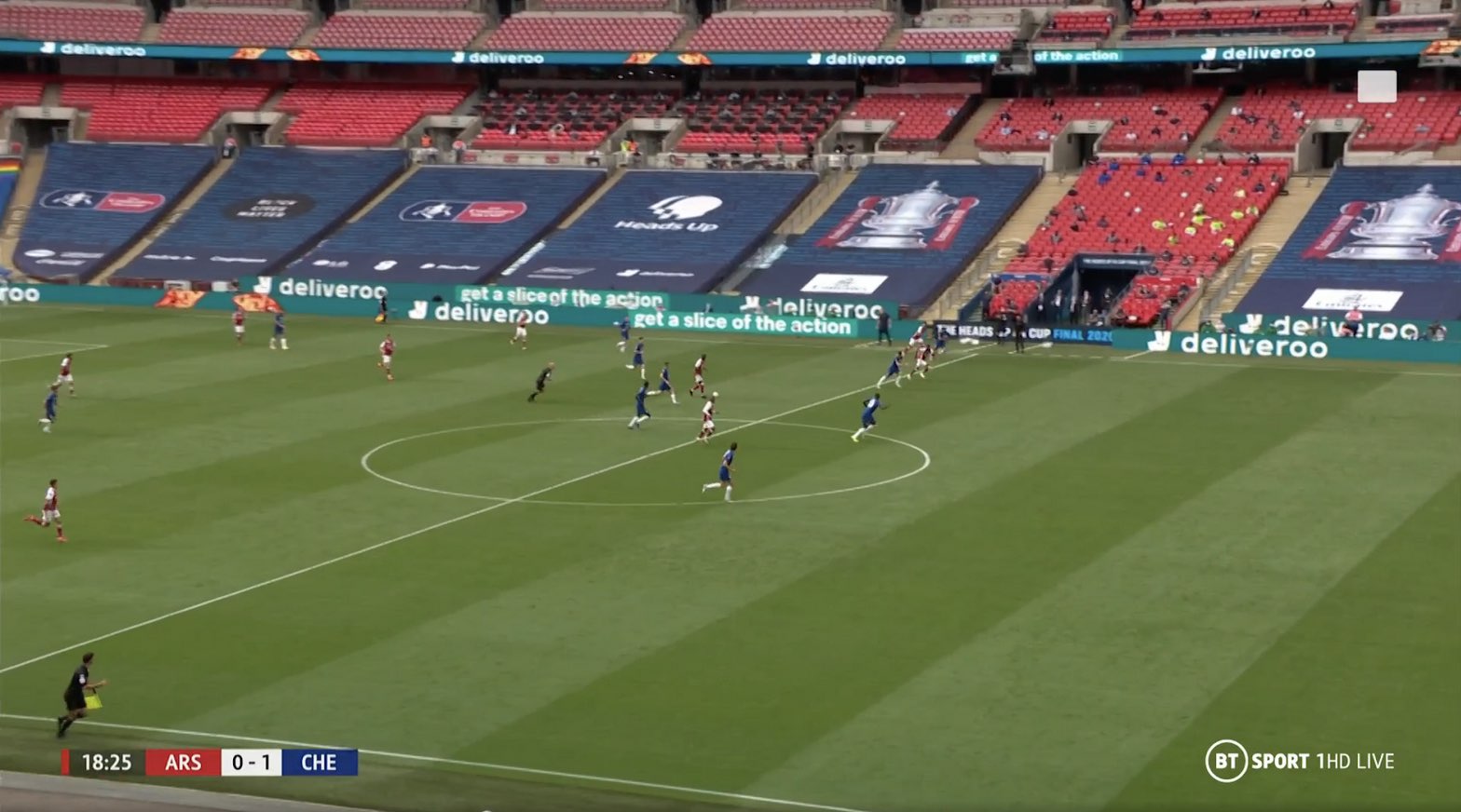 And when the ball was on the opposite flank, Maitland-Niles would often tuck in too. The key was that someone always held the width. It was usually Tierney but in the examples below, Aubameyang is sticking wide, keeping Reece James honest at right-back – the Chelsea youngster can’t press or mark Maitland-Niles and leave the Gabonese open. 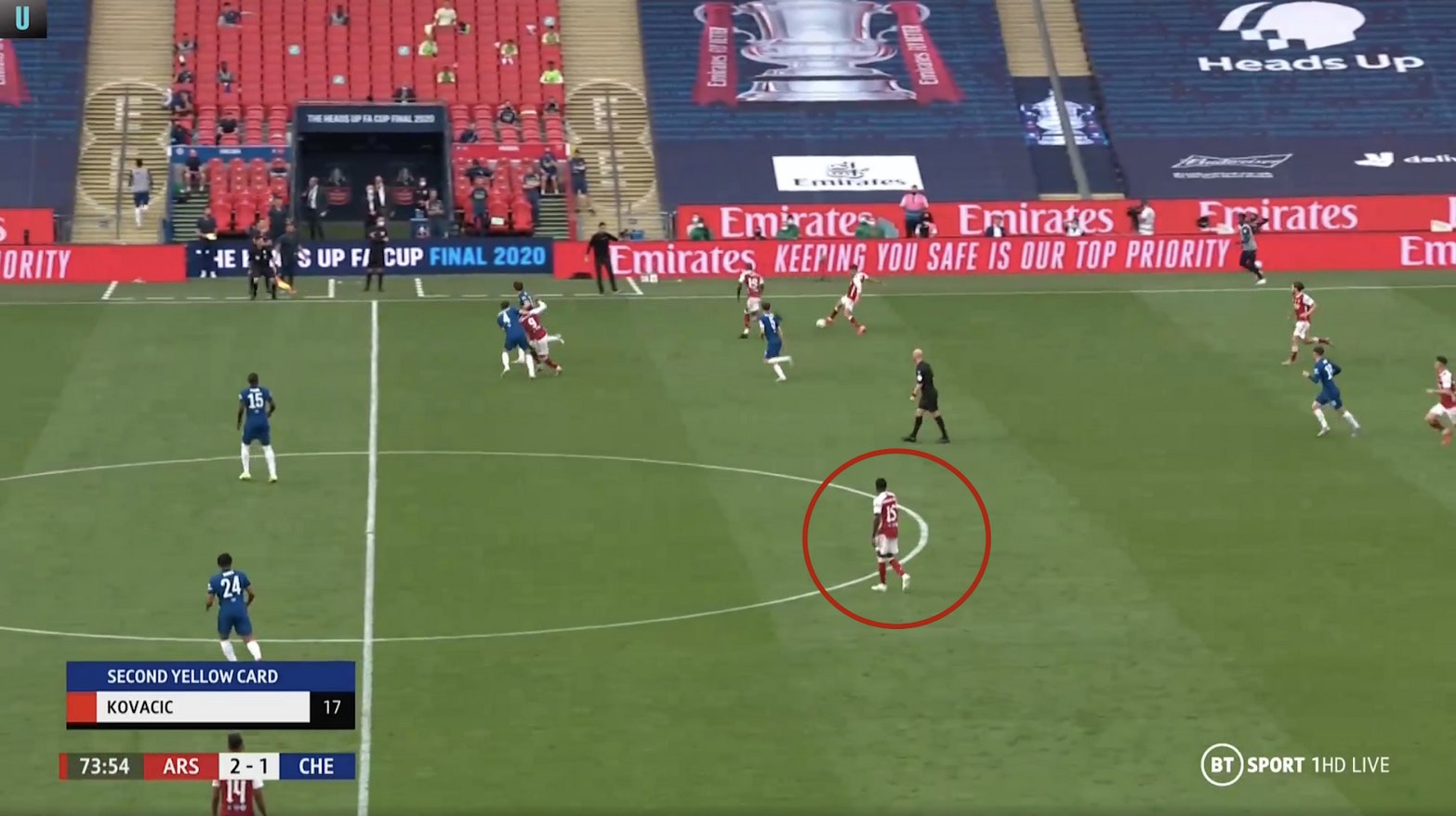 And the same happened further upfield on occasion too. Maitland-Niles is the furthest man forward here, with Tierney ahead of Xhaka and Ceballos. Arsenal used the full width of the pitch and with just four players, in the scene below, manage to force the entire Chelsea backline from committing. 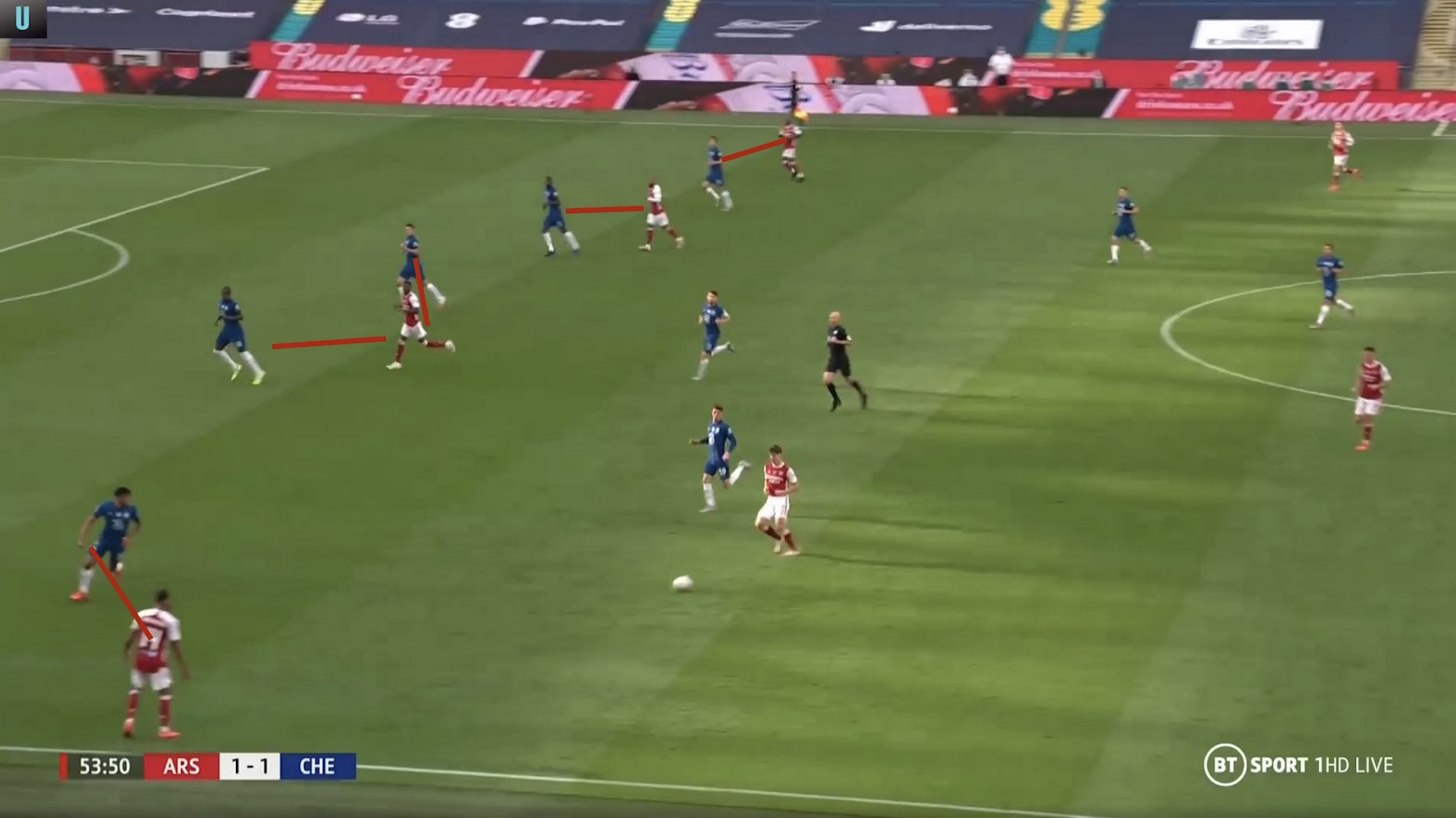 Aubameyang’s burst of speed and discipline to stay wide and follow the gameplan paid off. It saw him win a penalty, it saw Lacazette find him for a decent second half chance, and it saw him find the space to collect the ball for his glorious winner.

The captain was the star, the man who made the headlines, but watching the game back Tierney stood out. His defensive work, adapting to the threat that made Chelsea so good in the early stages, changed the game. His aggressiveness and diligence in that centre-back role stopped Mount having any impact on the match after the first 10 minutes. On the ball, he opened Chelsea up with his wide positioning, essentially playing two roles at once, and his long passing was as excellent as it was for the second goal in the semi-final.

Two managers lined their sides up in a 3-4-3 at Wembley on Saturday but only one of them had his players adapt and react to the opposition’s strengths while exploiting their weaknesses. Only one team, honestly, looked like their manager had given them the tools to adapt to what the game demanded of them. Just 28 games into his managerial career, Mikel Arteta has an FA Cup under his belt.

Let’s hope that’s the first of many.