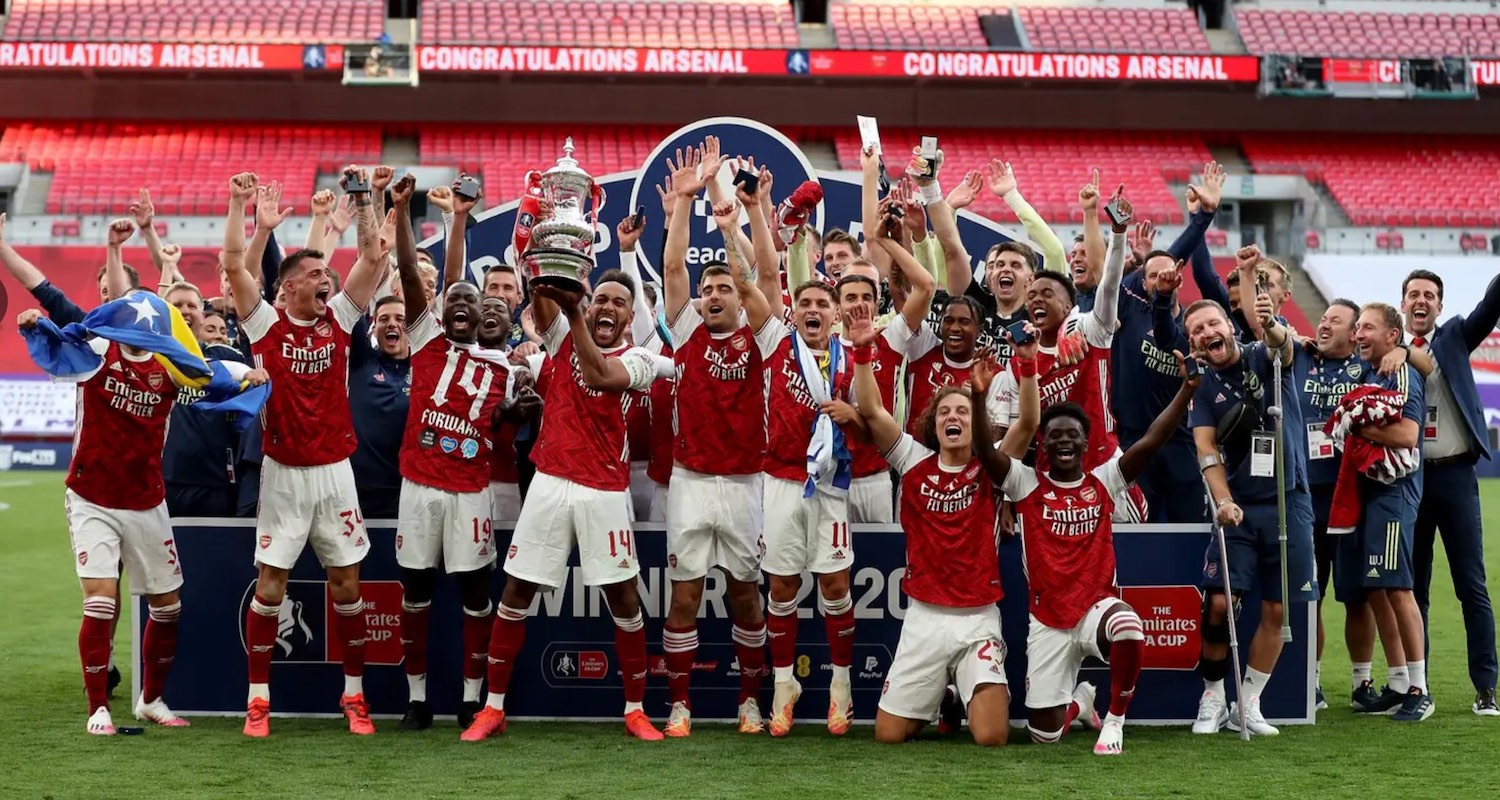 Does my head hurt a little this morning? Yes, yes it does. Am I as sad as Frank Lampard and Olivier Giroud? No, no I am not.

Arsenal won the cup, and I loved it. It was tense, my stomach wasn’t right, I felt stress, even my feet were sweating, and at the end when Chelsea were down to 9 men, I could see headlines about their late equaliser and stubborn resistance in extra-time to win on penalties, but that didn’t happen.

What did happen was Pierre-Emerick Aubameyang scored twice, just like in the semi-final, to win a record 14th FA Cup for Arsenal. The 14 driving us to number 14. After everything that has happened this season, almost 12 months of madcap, surreal, bizarre, frustrating, maddening, frightening, exciting nonsense that 2019-20 has served up, it seems somehow apt that we’ve finished it with success. A trophy, and all the other stuff it brings. More on that anon.

The main selection choice for Mikel Arteta was about the left wing-back position, and Ainsley Maitland-Niles’ sterling performance in the semi-final earned him his place in the final. A salutary lesson for some other squad members who weren’t even there yesterday, players who missed out on a big occasion because of their pride, their hubris, their ego, whatever you want to call it. Well, Ainsley has an FA Cup winners medal to his name this morning, what do they have but egg on their faces?

The game started badly, I think it’s fair to say. Chelsea looked sharp and on the ball, we looked a bit sluggish. The goal from Christian Pulisic, from a Giroud flick, was a bit of a wake up call. They’d had plenty of the ball, created some dangerous moments, and we paid the price for their bright start.

It took us until the first drinks break (please can we keep them next season coz we’re good after them?!) for Arsenal to really get going. All the same, I liked how we tried to play, using it at the back as we did against City and but for Maitland-Niles’ arse being offside Pepe would have scored a goal of similar quality to the one in that game after we worked it beautifully and deliberately from back to front.

The Chelsea defence never looked assured though, and our probing of them paid dividends just before the half hour mark. Kieran Tierney played a ball over the top for Aubameyang; he got goal-side of Azpilicueta who hauled him down and Arsenal had a penalty. I know there was a covering defender eventually, but I do think the Chelsea captain was a bit lucky not to see red. Anyway, as I said to my WhatsApp chums at half-time, let’s hope the referee’s decision wasn’t something we cared about at the end, and it wasn’t. Auba stepped up and slotted home the perfect penalty to make it 1-1. Azpilicueta went off crying.

We were by far the better side in the second half of the first half, and the first half of the second half began well when Pulisic did his hamstring when charging through on goal. He is a good player, so I was glad he got injured. Does that make me a bad person? I don’t care. It’s just a hamstring strain, he’ll be fine. But if you’re playing a strong team and one of their best players goes off, it’s something to relish. I was there in person to see Lionel Messi score four goals against us at the Camp Nou and it was genuinely an awesome thing to witness, but I’d have preferred if he reefed his groin to oblivion and didn’t do that. So it goes.

All the same, Chelsea could bring on someone with the experience and pedigree of Pedro who looked about 4 times as fast as any of our players which was a bit of worry. Did I mention the bit yet when Luiz went into the back of Giroud and he squealed and lay on the ground and then did nothing else for the rest of the game? I enjoyed that bit a lot. A LOT. Waggle those fingers of mild dismay until the end of time, pal.

Midway through the half, Hector Bellerin picked up a loose ball and drove towards the Chelsea box. The ball broke to Nicolas Pepe, he fed Aubameyang, and from there we saw something exceptional. He has scored lots of goals for Arsenal, but few like this one. He’s often used his pace, his experience, his uncanny ability to be in the right place at the right time, but we’ve rarely seen him bamboozle a defender like he did yesterday. You know in cartoons when a character like Bugs Bunny gives someone the old how-do-you-do, and they get turned inside out and their skeleton is on the outside? Can someone please check on Kurt Zouma to make sure his bones are where they should be this morning? Aubameyang did that to him, going one way, then the other, before clipping the ball beautifully beyond Willy Caballero.

What a goal. What a finish. What an FA Cup final winner that was.

What a contribution from the captain. There has been criticism in the past about his contribution in the biggest games, but a double against City in the semi, and a double in the final against Chelsea has put that to bed. On top of the sheer number of goals he scores in general for a team which doesn’t create as much as it should, yesterday demonstrated just how important he is to this team right now, and for the future. He is a player we have to keep, and if it’s more expensive now because of what he did at Wembley, oh well. That is the price of success.

I don’t really need to mention the Kovacic red card, but frankly it was absurd and never a second yellow. Ask me if I care though.

I could not give a fish’s tit.

There were some moments when my heart was in my mouth because that’s just the way it goes when you’re 2-1 up in a cup final, whether you’re playing against 10 men or not. There were seven evil minutes of stoppage time at the end in which I felt like anything could happen, but the only thing of note was Pedro picking up an unfortunate injury in an incident in which Emi Martinez demonstrated how important he’s been of late. He got down bravely to prevent danger, and in the end – after what felt like an interminably long stoppage – the referee blew his whistle and Arsenal had won the cup.

I watched Emi on TV start to cry because of how much it meant to him, and it almost set me off. The celebrations of the players, the manager, and the staff were fantastic to watch, and Aubameyang dropping the cup before lifting it was pure 2020. Mikel Arteta said:

Everybody worked so incredibly hard. I am so proud to represent these players and this club.

It’s a great start! “I had only one mission when I came here and it was to make the players and the staff believe that we could do it. We had to change that energy and that mentality.

Just by seeing them in the dressing room all together, the way they enjoy the professionalism and their time together… it makes me more proud and it’s a consequence of that, that afterwards we can achieve things and win titles together.

In seriousness though, it is. He came into a football club last December that was in complete disarray, and we’ve ended the season with a trophy, with success, and with European football for next season. I genuinely think that there was more pressure on this game than last year in Baku. At least then we had the safety net of knowing we had Europe whatever happened. The implications of losing yesterday were enormous, perhaps more than we might ever know, so to rise to the occasion and come out on top puts credit in the bank for the manager, and his players.

There has been a huge collective effort from 99% of his squad and it was repaid in the two games at Wembley. To beat Man City and Chelsea in this season, with their quality and stability and investment, was a long-shot, but we did it through hard work, smart tactics and players who bought into and believed what the manager was doing. There should be no consideration for those who were absent and who missed out, because that was THEIR choice. They weren’t there to help the players who put in the effort and it shouldn’t be forgotten either.

However, this morning should be about celebration, not recrimination. I felt so happy yesterday at the end, not just for myself, but for all Arsenal fans who have been through a very difficult season. To end it like this was was amazing. I also think it augurs well for the future, and Arteta can tell those on high ‘Look what I did in just 6 months (of actual season time) with an imbalanced squad and the most trying of circumstance imaginable. Back me and I can do more.’

It gives him incredible leverage to back up the demands he has made throughout his tenure so far to improve the squad. For me that can only be a positive thing. He has wrung everything he can out of these players, and on a big stage, under immense pressure, they delivered a record breaking 14th cup. The number 14 was the leading man, but the supporting cast all deserve their football Oscars too. It means we can go into next season with a spring in our step, with genuine hope and optimism, and the knowledge we can build on the foundations Arteta has put in place since December.

Finally, let me just say thanks to all of you as well. This has been a season like no other, with its ups and downs, and all the stuff that has gone on around it from a societal point of view. I know for some of you out there it has been extremely trying on all kinds of levels, and I hope that this morning what this crazy football club we support did brings you some joy and happiness. Thanks for sticking us with here on Arseblog throughout it all, I can’t tell you how delighted I am that we’ve signed off on this positive note, it feels like as a collective we deserve this, so whatever you today and the days to come, enjoy it because it’s so important to make the most of the good times.

There’s a bit of an instant reaction podcast over on Patreon for those who are members, but as ever James and I will be here tomorrow with an Arsecast Extra on what will unquestionably be a very goodly morning.

Willian – it was really (nothing) … er … not very much