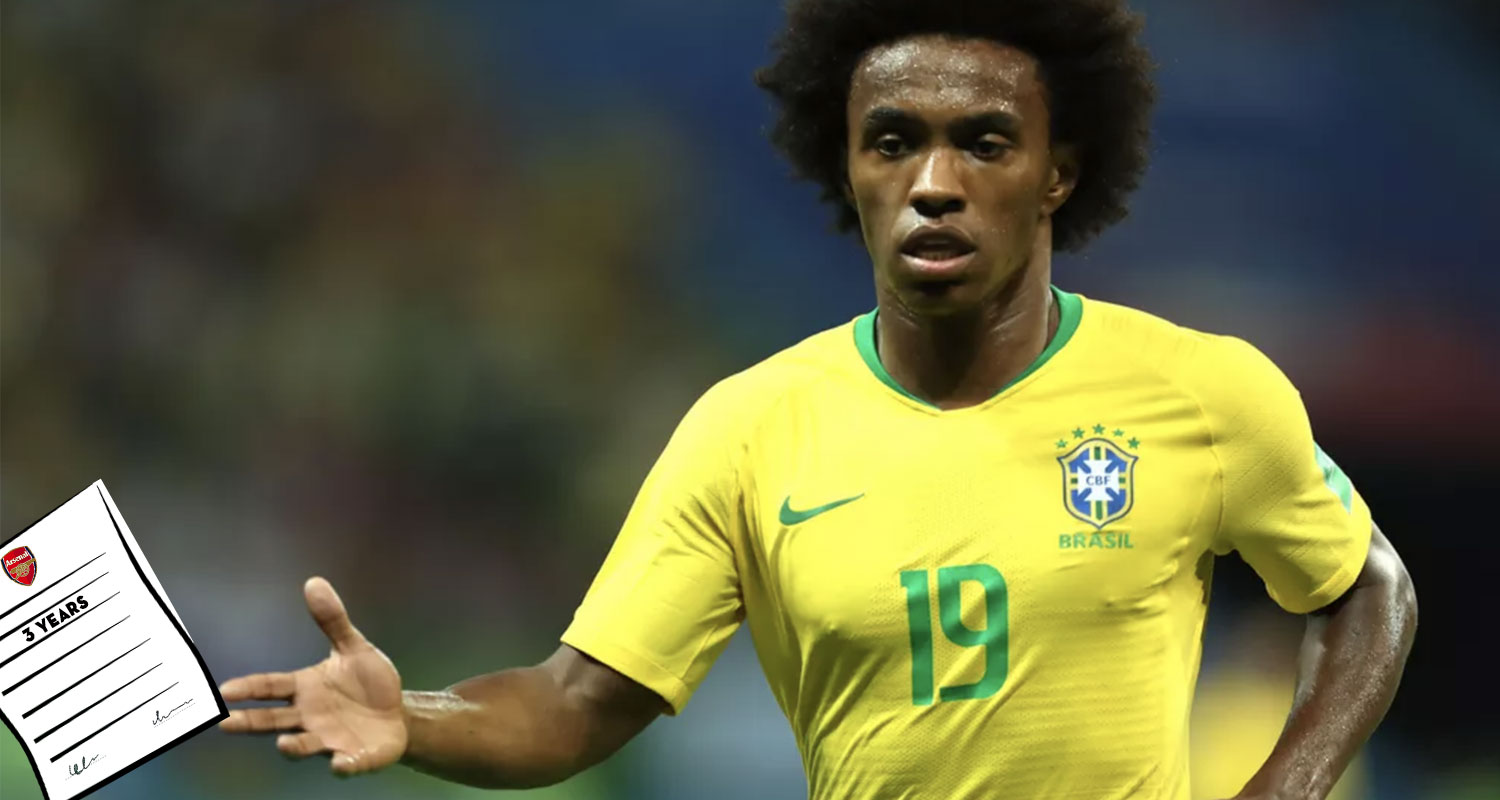 Good morning. It’s Monday, and who knows what excitement this week will bring. Contract renewals? New signings? A major departure? The disbanding of the entire ground-staff to be replaced by a herd of Anglo-Nubian goats because they will eat the grass and prove more cost-efficient than having actual people use lawnmowers? We shall see.

I suppose one thing that seems inevitable is the arrival of Willian after he wrote a letter to Chelsea fans to certify his Stamford Bridge departure. I tried to read it, but as it didn’t begin ‘Dear Cuntos’, I gave up immediately. In some ways I feel a bit responsible for this one, as James and I ‘joked’ about it so much on the Arsecast Extra we’ve somehow made it happen, but in truth that’s beyond our powers.

As and when it happens, I will comment further on it, but it’s not one which excites me a great deal. Maybe we don’t need excitement, maybe we need some experience, someone who can come in and do stuff immediately, but I’m struggling to get too invested in a 32 year old coming from Chelsea. A Chelsea who are also investing in the kind of young, up-and-coming talent to replace him that I’d love us to go for.

I realise the financial situations are very different. Chelsea have a billionaire owner with a net worth of $12bn, while our billionaire owner has a net worth of only $8bn. How can we expect to compete with that kind of extraordinary, incredible, grotesque wealth with merely ordinary, incredible, grotesque wealth? Please don’t try and remind me of the differences in the way the two clubs are run, by the way. I’m very well aware. I’m just making an obvious gag.

I know I’m not the first to make this point, but I also get very heavy Mkhitaryan vibes from the Willian deal. Except Mkhitaryan is now still younger than Willian is, and he was such an expensive flop – we’re basically giving him away to Roma to get his £200,000 a week off the wage bill. It’s hard not to worry about the way players of a certain age can lose so much from their games that made them effective. Even a few percent here and there makes a massive difference at this level, so we have to hope that physically he stays the course.

Willian turning up at Arsenal pic.twitter.com/plewDLOvCd

Anyway, more on this as and when it happens, and I think contract length may well play a part in how people react to this one. There are rumours of a three year deal which is generous, to say the least, given his age.

Meanwhile, after our departure lounge post the other day, there have been rumours involving Alexandre Lacazette. He is going to be part of a swap deal for Thomas Partey, but he is also going to Italy for £30m. This is an interesting one, because he’s got two years left on his current deal and, assuming we’re doing our best not have another contractual saga with a player heading into their final year, a decision of some kind has to be made about him during this transfer period.

We can either offer him a new deal, or sell him and cash in. I think we’re already seeing some signs that he’s physically declining, and handing a player of his age a new contract means we could easily find ourselves in another situation where we have an aging, less effective player on big wages who is very hard to shift. At the same time though, if he goes he’ll need to replaced. It places too much of the goalscoring burden on Pierre-Emerick Aubameyang, and we need more attacking depth in our squad than that.

Is Eddie Nketiah ready to make that step up, or do we go into the market and try and find a young striker to fill the gap? There are whispers about Odsonne Edouard at Celtic, but few other names doing the rounds at the moment. I know there are other priorities during this window. We need to address the dearth of creativity in the side, particularly in midfield, and I hope we bring in a centre-half too because the collection we have is sub-par if we’re being honest. However, because of the contract – an issue the club’s executives insisted we’d improve – something’s got to happen with Lacazette one way or another.

Finally for today, PSG are reportedly thinking about possibly maybe considering a move for Matteo Guendouzi. The Frenchman has been out of favour since the Brighton game, and apparently Mikel Arteta wants him gone. Fair enough, he sets the standards, and if Guendouzi can’t live up to them, off you go sunshine. Like Lacazette, he has two years left on his contract, and at his age he could bring in a few quid, no question.

I’ve seen figures like £40m bandied around, which seems kind of absurd to me. I know it would be great for us to get that, and I hope we 100% maximise his value, but if it were the other way around and we were set to pay that amount for him, I’d view it as conclusive evidence that the lunatics were running the asylum. He cost us £7m, if we can triple that and bring in anything north of £20m, I’d say that’s a good return on a player who catches the eye more because of his hair than his performances.

Right. I’ll leave it there for this morning. James and I are going to be an Arsecast Extra for you this morning. As ever if you have questions or topics for discussion, send to @gunnerblog and @arseblog on Twitter with the hashtag #arsecastextra – or if you’re on Arseblog Member on Patreon, leave your question in the #arsecast-extra-questions channel on our Discord server.