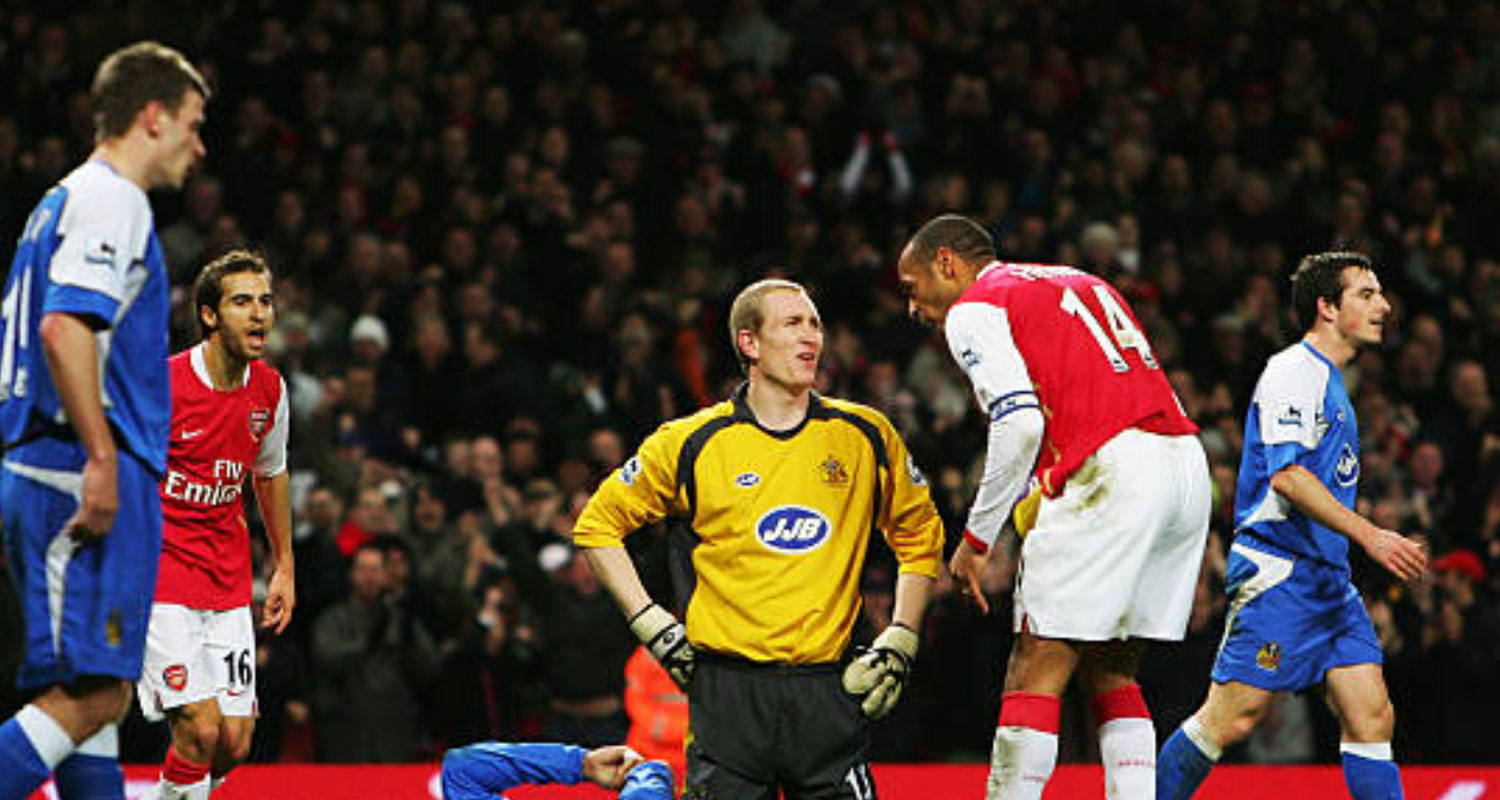 The Arsenal players versus Unai Emery thing continues again this morning as one unnamed squad member says ‘I had forgotten what real football was’, while the former boss says all the players are ‘stinky bum faces with poo breath’.

This thing looks set to run and run and … nah, that should be that at this point. The team will have returned from Dubai now and will get down to the serious business of preparing for Newcastle on Sunday. It’s a home game, we’ve had our fun in the sun, but now it’s time to start winning again. More on all that later in the week.

As it’s still the Winterlull, it’s very quiet so I thought I’d go back in time and relive a few stories from this very day in the past.

Newcastle player Laurent Robert is full of high drama after he is sent off against Arsenal in a 1-1 draw at St James’ Park. He stood over a free kick, denying the opportunity for us to take it quickly, and Dennis Bergkamp made sure the ref saw it by kicking the ball against the Frenchman. Having just been booked for a crude challenge on Lauren, the ref gave him a second yellow, leading to Robert saying of Dennis:

He was very cunning and unfortunately for me, the referee fell in the trap. I had just equalised, I had had a great game and I took this booking as a staggering blow.

I’m not sure how cunning it is to take a quick free kick when some dope is standing in front of the ball. It’s not like an elaborate ‘mouse trap’ scenario. He was always an annoying opponent because he was one of those players who was quite good but nearly always seemed to demonstrate that against us.

Arsene Wenger is dealing with the fall-out of Jose Antonio Reyes being duped by a Spanish radio station into thinking he’s speaking with Real Madrid’s sporting-director Emilio Butragueno.

There is no reason why I should sell the player. It does not take away from the challenge that we have, both Reyes and myself, in front of us to make him one of the best players in the world, and I think he can achieve that. We have a good Spanish troop here. He has integrated and is loved by everybody. That will help him to go through periods like that.

For those that don’t remember, a Spanish radio station called Reyes pretending to be Butragueno. It was mid-winter in England, the sunshine days of the early season had long gone (that 5-3 against Middlesbrough), and the young Spaniard was finding life in England tough. Believing he was speaking with a club he wanted to join, he made it clear how much he was struggling, and that he’d be open to leaving. He denied saying there were ‘bad people’ at Arsenal, but it was a huge embarrassment.

It’s also completely bizarre when you think back on it now. It was obviously underhanded and completely mean-spirited by the radio station in question (Cope), preying on a young man unsettled and going through a very difficult time. Between October and the end of that season, Reyes only scored three goals in 30-odd games. It was around that time that cracks started to appear in his relationship with Thierry Henry who was demonstrably cold towards him on the pitch a couple of times.

He was only 22 or so, and that ‘prank’ phone call was just lowest common denominator stuff. When you take into account this happened around the same time as Chelsea tapped-up Ashley Cole, and that situation was going from bad to worse to downright toxic, there was a lot for Wenger to deal with there.

Reyes stayed another year, scored just six goals in 45 appearances in 2005-06 and departed for Real Madrid in a swap deal for Julio Baptista who told everyone he liked to score overhead kicks.

There’s often been a sense that Arsenal have been unfairly picked on by the media, and for the most part I think this is down to a natural sensitivity we have as fans. We’re hyper-aware of how we’re treated, and perhaps our perception of criticism isn’t quite as objective as it ought to be. Other clubs all feel like they’re hard done by in the tabloids or by referees, but from our perspective we don’t see it.

Sometimes though, there’s an element of truth to it. In 2007, we’re playing Wigan at the Emirates, and they’re winning 1-0 though a first half goal. Their keeper, Chris Kirkland, is time-wasting throughout. It’s frustrating for us because we need a goal, but referee Phil Dowd isn’t interested in that, thinking instead of how he’s going to devour a large piglet and lots of mash after the game.

So, when we equalise with an own goal from a cross from an offside Mathieu Flamini, Thierry Henry picks up the ball and presents it to Kirkland as if to say ‘Do you want it now?!’ – you can just about see it in this highly pixelated video. In the grand scheme of things, hardly football’s most egregious crime.

On Sky they went to town on Henry though. David Platt said Henry should give Kirkland a public apology. I mean, really. A full page ad in The Times. Actually, now that I think about it, that would have been fun.

Andy Gray said players at big clubs don’t realise what it’s like to play for a small club and to be on the verge of a big result. Also nonsense. It’s a game of football. Players at big clubs and small clubs know what it means to win and lose, and when one side is time-wasting and the officials do nothing about it, it’s a frustration regardless of the relative stature of the teams.

The best bit though was after Tomas Rosicky scored what turned out to be the winner, Jens Lehmann was booked for time-wasting when he was retrieving the ball from behind the goal. Quite deliberately he threw the ball at the hoardings, causing it to bounce behind him so he had to turn around to pick it up again. Classic Jens.

“Oh there’s Jens Lehmann up to his tricks,” bleated Andy Gray. “It’s funny how it’s ok for one team to do it …”

Yes, you’re absolutely right for once, Andy. It’s hilarious. It was back then, and it remains so until this day.

Right, that’s our trip down February 12th memory lane from years gone by. More from me tomorrow as the news starts again.

REYES! STAND UP FOR THE CHAMPION