Arsenal have had an incredibly busy summer and it’s fair to say the vast majority of fans have been left feeling very satisfied indeed. Here’s a look at the first team incomings, from defence to attack.

Arsenal have signed a 32-year-old Champions League winning centre-back with 56 Brazil caps and 160 Premier League appearances for a measly £8m. Yet, somehow, not everyone is satisfied. Such is the power of David Luiz.

To say he splits opinion would be putting it mildly but this looks like an excellent deal for Arsenal. Luiz is certainly an impulsive defender, and that may not be exactly what’s needed at the back, but he’s also impressively uncompromising. For years Arsenal have lacked someone a bit mean and, frankly, skilled in the dark arts. Now they have the rugged Sokratis and the slightly more sly but no less aggravating Luiz. Strikers won’t have an easy time against them. (And, to be fair, nor may Arsenal fans given the introduction of VAR.)

Luiz’s all-action style will lead to mistakes – they’re all but inevitable – but he should make life uncomfortable for opposition players and that’s something that isn’t always true of Arsenal defenders. Gaps could appear in the defence – especially as Luiz focuses on the ball and not the space around him – but his so-called howlers in his game have diminished over recent seasons.

Lastly, Luiz is fantastic in possession. In true Brazilian fashion, he is both daring and deadly with the ball at his feet, even as a defender.

42 – David Luiz attempted 42 through balls in the @premierleague in 2018-19; eight more than any other player in the division. Geezer. pic.twitter.com/Mp6rSrOYoq

The ability to play out from the back, to calmly control possession, and to slice teams open is a huge boost, especially when he is likely to be paired with Sokratis, adding an extra element to Arsenal’s game in possession.

It’s always a bit hard to judge a player coming out of another league. It’s even harder when you’re not quite sure what level that league is at. One thing’s for sure: Kieran Tierney is very good at attacking.

The left-back will be expected to provide the same impetus from defence as Sead Kolasinac last season, though he will do so with a bit more grace. Fleet-footed and supremely comfortable with the ball at his feet, Tierney is extremely quick and, more impressively, retains control of the ball when running at speed.

Encouragingly, he also has an eye for a pass. If his time at Celtic is anything to go by, the 22-year-old isn’t interested in blinding running to the byline before flashing a hopeful ball across goal. That’s not to say he doesn’t cross the ball – he does, and he does so very often – but he is also happy to look inside for a pass into the channel, something that should suit the likes of Mesut Ozil, Dani Ceballos and Alexandre Lacazette, all of whom enjoy receiving the ball to feet.

The biggest question marks are over Tierney’s ability to defend. The indications from his time in the Scottish Premiership are that he is a fairly solid defender, but the quality of his opponents in the Premier League will be significantly higher (and the relative quality of his own team much lower). Once again, his pace is extremely useful in defensive situations, allowing him to make up for any errors of judgement,

If nothing else, Dani Ceballos should be a lot of fun. Early observers have compared his style to that of a certain Santi Cazorla and, honestly, they don’t seem too far wide of the mark. I dare opposition sides to press this man.

Ceballos isn’t, though, your typical attacking midfielder. He possesses excellent dribbling ability and a powerful shot from distance but don’t expect to see him bursting into the box and getting himself on the scoresheet.

Instead, Arsenal fans can be excited about a truly gifted midfielder who will help the side play out from the back and progress the ball excellently. Ceballos is a sensible passer who does take risks but it’s his quick feet that stand out most. Coupled with surprisingly impressive defensive output, his addition brings up the possibility of fielding a three-man midfield.

Ceballos could even slot in on the left-hand side though, again, nobody should then expect to see him contributing double figures in terms of goals. Figuring out how to get him in the team alongside Arsenal’s other midfielders will be the tricky part. He seems likely to takes Mesut Ozil’s nominal number 10 role but could also push Granit Xhaka down to the bench, a move that would see him partner Torreira in midfield.

Wherever he does end up playing (and whoever he ends up partnering), it should be fun watching the Spaniard in red and white this season.

The most exciting of the lot is, naturally, Arsenal’s record signing. A lot of focus has been on the defence in recent years, and it’s easy to see why, but signing an electric wide player already would have been my number one priority last summer. This year it was finally addressed.

“He is high volume, high risk,” Phil Costa wrote for Arseblog upon Pepe’s arrival. And he’s not wrong. A wide player who regularly attempts to beat his man and regularly tries to get shots away, Pepe drove Lille to a Champions League place with his spectacular performances last season.

As well as netting 22 Ligue 1 goals (nine penalties included), he also bagged 11 assists. A player who can create something out of nothing both for himself and for team-mates is incredibly valuable and bodes well for Arsenal.

Pepe will almost exclusively slot in on the right of Arsenal’s attack but that doesn’t mean he’ll be spending 90 minutes running in straight lines and getting chalk on his boots. On the contrary, the Ivorian is most likely to be seen collecting the ball in the half-space between the wing and the middle of the pitch before beginning a darting run. From there he can go inside – looking for goal – or outside, in the hope of his beating his man and finding a team-mate inside the box. The ability and willingness to go both ways should add a level of unpredictability Arsenal have been screaming out for in attack.

Maybe there are question marks over how hard Pepe will work, especially when he lines up alongside Mesut Ozil, but otherwise this deal gives Arsenal so much more verve going forward that it will be worth the occasional carelessness and the somewhat laid-back approach to his defensive duties.

Nobody knows woo much about Martinelli. This was true when he joined the club and it’s still true now, but the early signs have been very promising.

From his pre-season outings, Martinelli displayed a nose for goals and a willingness to make runs in dangerous areas, a trait that can only ever be positive. He also appears to be relatively quick, strong given his age, and more than decent dribbler.

The Brazilian only turned 18 in June but it looks like he will be a member of the first team squad this year. What that actually means in terms of playing time remains to be seen.

What does this all mean for the way Arsenal will set up?

Firstly, it’s worth noting that each of the new signings are athletically impressive. David Luiz can be a physically dominant defender. Tierney and Pepe may appear slight but are incredibly fast and can more than hold their own. Ceballos is surprisingly strong with his long stride. Martinelli, still just 18, is relatively tall, quite quick, and already looks large for his age. All this should benefit Arsenal in their attempts to press the opposition.

Well, it means Unai Emery will really want to find a way to get Pepe on the pitch with Pierre-Emerick Aubameyang and Alexandre Lacazette. That almost certainly means Aubameyang moves wide and Arsenal can expect to start the season with him on the flank and either Ozil or Ceballos playing in the number 10 role.

That leaves the squad, assuming Mohamed Elneny leaves, looking a little bit like this.

(Please note this is not what I’m suggesting should happen, but what I see as the most likely outcome!) 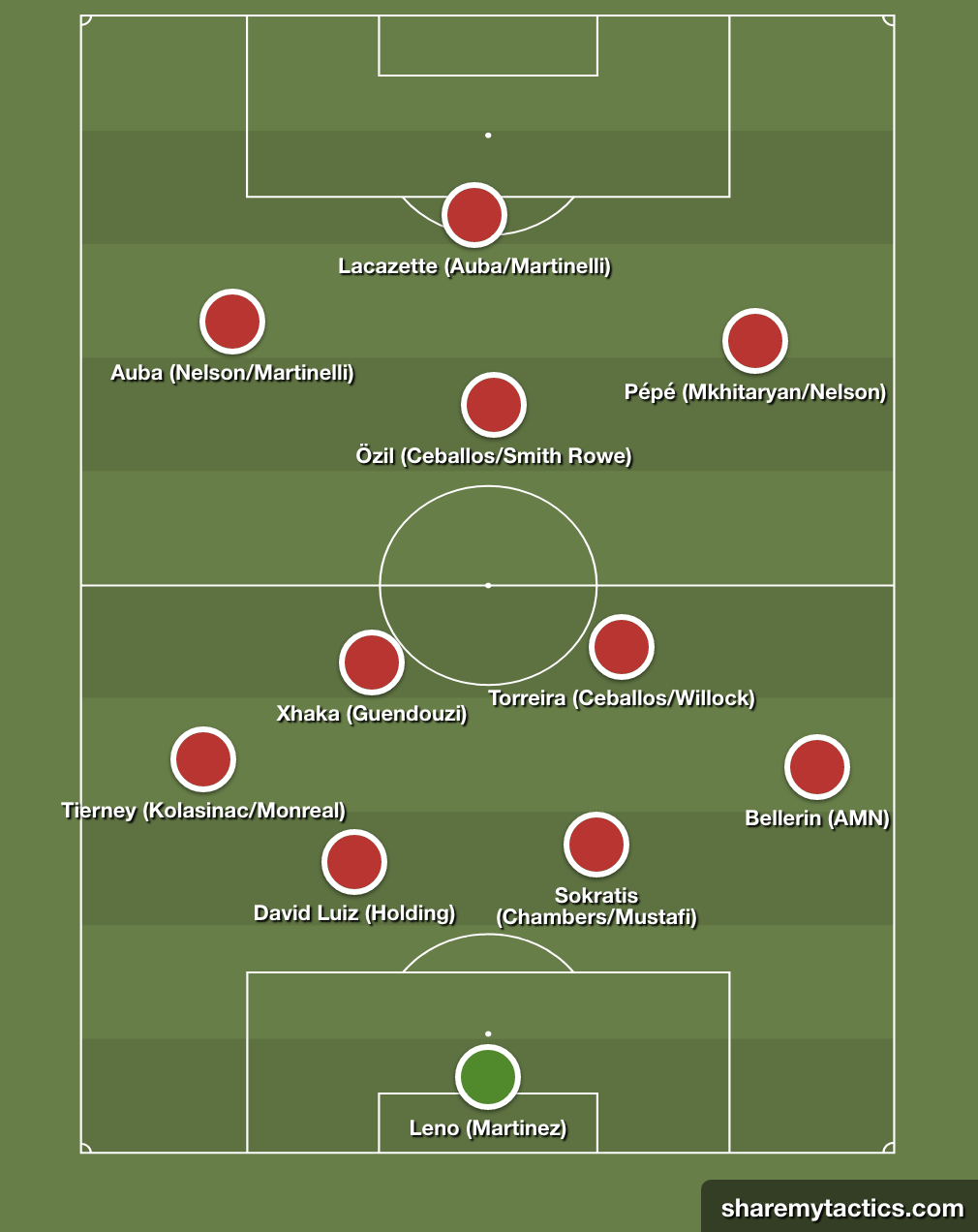 The obvious thin area is on the left where, following the sale of Alex Iwobi, there is no obvious first choice player. If Aubameyang leads the line, any of Reiss Nelson, Henrikh Mkhitaryan, Gabriel Martinelli, Bakayo Saka or Emile Smith Rowe could play on the left flank. Though, for now, Emery is most likely to revert to seniority.

The next obvious evolution of this Arsenal side would be a three-man midfield. It’s something we didn’t see last season, hence it’s mentioned second here, but the squad is really built for it now. The extra protection given to the defence would help unshackle Arsenal’s frontline, while the addition of Ceballos and emergence of Joe Willock could give Arsenal a truly balanced three-man midfield. 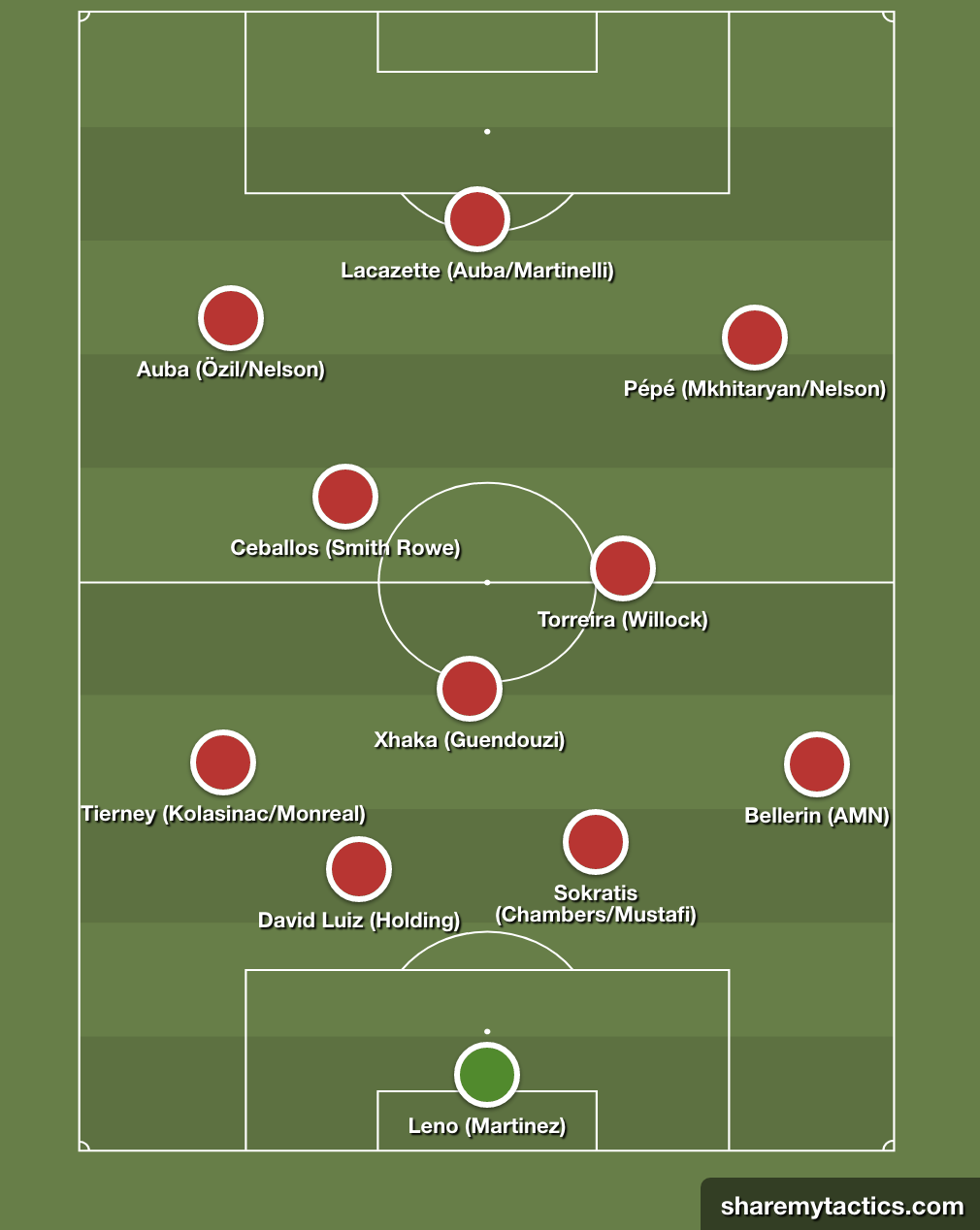 And then there is, of course, the option to return to a back three. This seems far from Emery’s priority for 2019/20 but if injuries strike in wide areas, don’t be too surprised to see the Gunners revert to something like this. 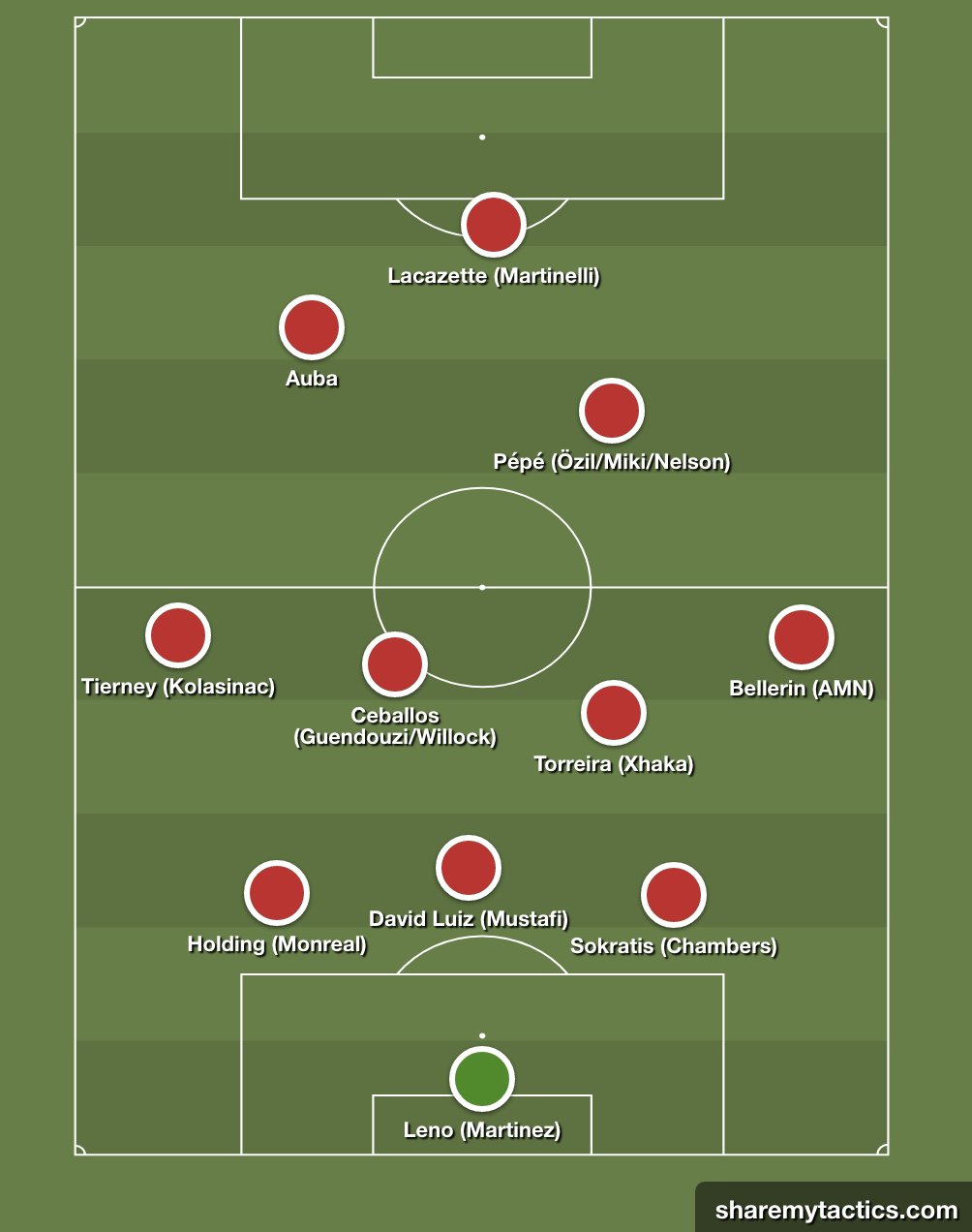 All in all, the transfer market added pretty much everything any Arsenal fan could’ve wanted when last season ended. The sale of Alex Iwobi does leave a hole on the left and could unbalance the attack but left-back and centre-back were problem areas and the club have also managed to add a central midfielder and the intuitive, flashy wide player the team has been screaming out for.