All formations have weaknesses. It’s why how you line up can be so interesting and so decisive in football.

The 4-4-2 lacks numbers in central midfield or support on the flanks, depending on how narrow you play. Using a 4-3-3 can be risky: either you don’t rely on the wingers to defend or you risk your striker becoming isolated in a 4-5-1 shape. Using a 3-5-2 demands enormous amounts of running, in both directions, from your wide players. And a diamond leaves you with the conundrum of how to deal with opposition fullbacks.

Arsenal have effectively used a 4-diamond-2 in the past under Unai Emery, switching to the formation to wrestle back control in last December’s north London derby win and then using it from the off to stifle Maurizio Sarri’s Chelsea. On Saturday, though, it saw the team pinned back at Anfield. Dani Ceballos lined up at the tip of the diamond, with Arsenal hoping Unai Emery hoping the pace of Pierre-Emerick Aubameyang and Nicolas Pepe would be enough to provide a threat on the break.

“We were thinking it could be an opportunity to play in the match with Pepe and Auba,” said the Spaniard. “Also, our moment was in the transition and they are two very strong players to do that. We made two or three chances to score.”

The plan wasn’t bad at all and Arsenal did, indeed, create openings. Pepe came close twice, once after capitalising on a loose pass, then setting off on a brilliant jinking run past Andrew Robertson, and arguably should have scored. The outcome, though, was always going to be about how well Arsenal could defend. How successfully could they limit Liverpool’s threat?

Sitting back would only invite pressure and, in theory, the diamond should have been a decent approach. With the strikers splitting to stop simple passes and press the centre-backs with angled runs, Arsenal should have been able to go man-to-man in midfield (with Xhaka covering Firmino) and given themselves a chance of at least forcing Liverpool to work hard to progress the ball. After all, Liverpool ostensibly used a diamond themselves, given Firmino’s tendencies to drop into midfield and the penalty area instincts of Salah and Mane.

But, from the off, Arsenal’s poor shape forced them back towards their own box. The game was just a minute old when Joel Matip found Andrew Robertson, who had the freedom to run unchallenged for 40 yards before delivering a dangerous ball across the pitch.

You shouldn't put pressure on the CBs and CMs if it leaves the fullbacks with acres to move into. Like this. pic.twitter.com/BBZBINt7es

Arsenal have consistently been forced to sit back and dig in (something the team just isn’t suited to) at Anfield over recent years. Realistically there are two ways to limit the amount this will happen, or at least attempt to. One is to play through the pressure– far easier said than done – and the other is to press high, making life uncomfortable for the hosts.

The diamond could have provided the platform for this. Last season’s Chelsea were much more predictable than Liverpool – they play through the deepest midfielder, rather than through the wings – and Arsenal had the benefit of facing them at the Emirates Stadium when a diamond was employed. Still, though, that game could have been more instructive than it was at Anfield.

Rather than have the striker split between the centre-backs and the fullbacks at Anfield, they seemed to almost exclusively press Van Dijk and Matip, puzzlingly leaving Alexander-Arnold and Robertson open. 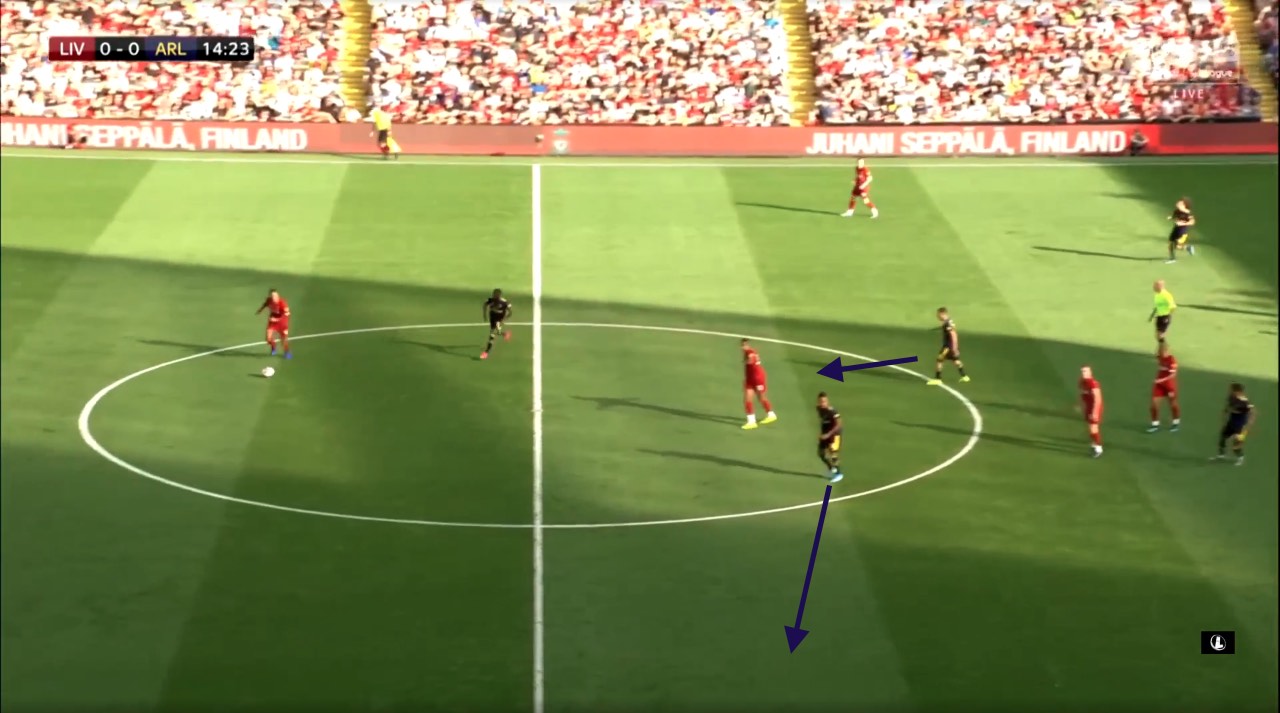 Looking at the Liverpool centre-backs in possession in the first half, the lack of sideways passing and lack of passing near their own box illustrates how easy Liverpool had it in on the ball at the back. 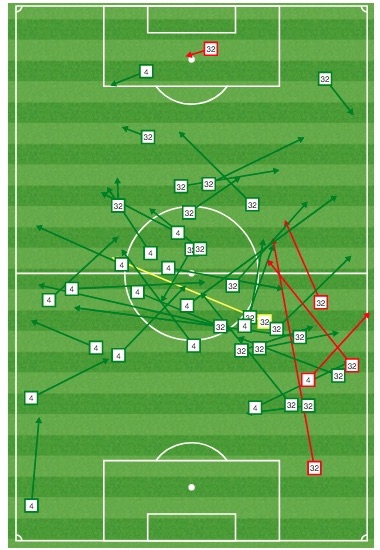 Compare and contrast to Arsenal’s defenders in the opening 45 minutes. 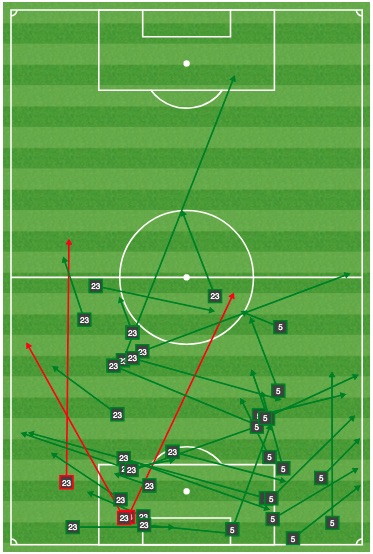 The shape employed by Liverpool when Arsenal had possession around the halfway line (not that it was often) was a perfect template for Unai Emery’s side. With a disciplined and balanced two banks of three, the hosts had complete control of the pitch without pressing intensely and without having the ball. Firmino – at times used as a number 10 in a diamond during his time at Hoffenheim – looked to force the centre-backs to play the ball wide, blocking an easy option in to Arsenal’s deepest midfielder Granit Xhaka.

The wide forwards went wider, preventing simple passes from Sokratis or David Luiz to Maitland-Niles or Monreal, but stayed narrow enough to support a pressing effort in the centre of the pitch. When Xhaka moved out of Firmino’s shadow, Fabinho would advance to prevent a pass into the Swiss. 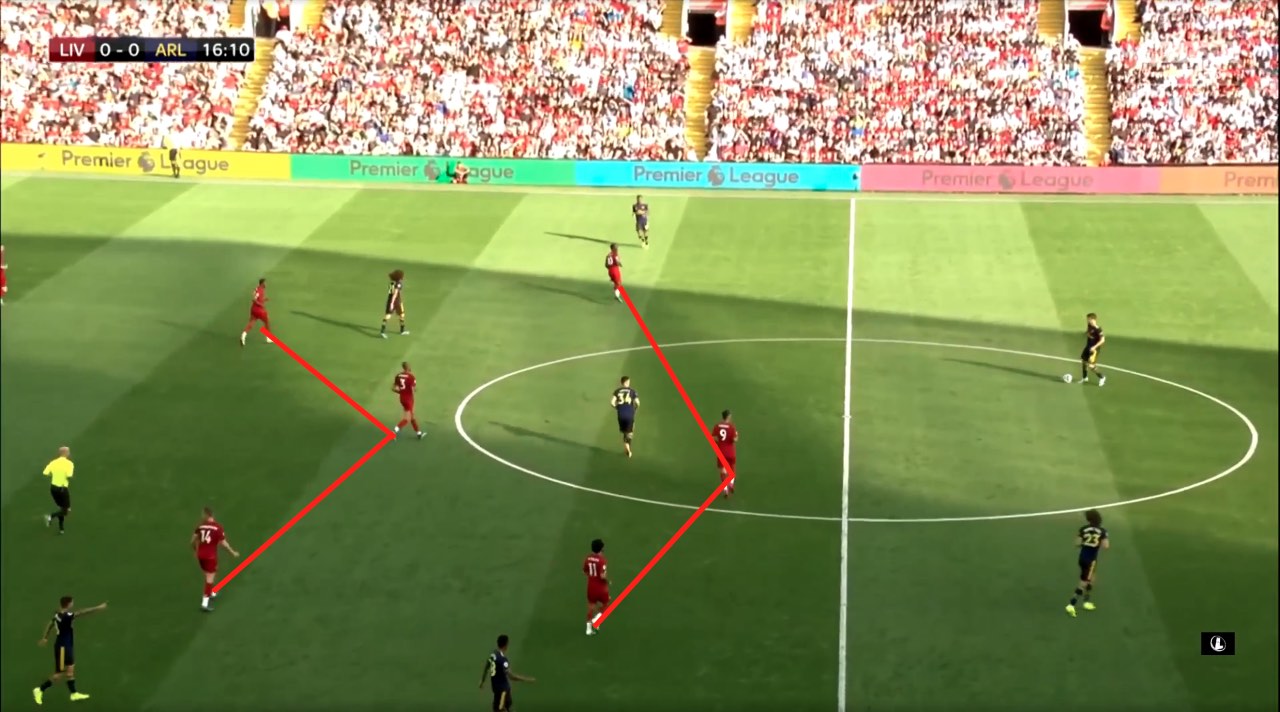 By splitting the strikers and allowing Ceballos to advance, Arsenal would have had a much better coverage of the pitch and a chance to force Liverpool back, rather than retreating to the edge of our own box time and time again. Much is said about the abilities of Virgil van Dij kbut defence starts at the top of the pitch and Liverpool’s greatest quality against the ball is simply preventing the issue by stopping teams from progressing upfield. Klopp is, after all, the most famous exponent of pressing as a means of defending.

Unai Emery admitted afterwards his team were far too deep and invited Liverpool on.

“In the first half we were very deep defensively because they used their two wingers and they were giving [them] the ball close to our box,” he said.

Emery himself mentions keeping the ball better and Arsenal could have done that more easily with some small adjustments in pressing. With Arsenal too narrow in the first line of pressing, Joe Willock and Matteo Guendouzi were needed to cover the flanks as well as the Liverpool midfielders. In order to cope with the work rate, Guendouzi eventually dropped deeper and deeper, effectively sitting in front of Maitland-Niles as a right midfielder by the end of the first half. With the team struggling to press, the midfield was completely flattened and Arsenal’s passing was too square, making it easier for Liverpool to press them.

Another possible alteration would have been a deeper role for Ceballos, whose qualities in pressing resistance are obvious, so his touches could have come more centrally rather than from drifting out wide. Instead, it was Matteo Guendouzi who supported Granit Xhaka. Captain for the day, the Swiss international had a solid game but you wonder how much Arsenal will progress in games of this intensity as long as he is a guaranteed starter. Guendouzi, for what it is worth, played relatively well. He could have been given more responsibility in helping the team control possession and, ultimately, his energy was wasted as he was forced to cover such a large amount of space.

The performance of Joe Willock was also encouraging. The academy graduate has real ability to drive with the ball and we’re yet to see a situation that fazes him. His bright moments in the first half were superb and it was his drive, in conjunction with Guendouzi aiding the build up, that led to what was probably Arsenal’s best constructed move of the game.

For a team that wanted to play out, Arsenal didn't do enough to outnumber Liverpool's press and stretch them across the pitch. On one of the few occasions they did, Willock's brilliant ability to dribble led to a decent chance. pic.twitter.com/RlUwWRYmoI

A lot has been said online about Emery’s decision to use a diamond but that doesn’t strike me as an inherently wrong decision. There will be gaps no matter how you play: 4-3-3 would have left a central striker isolated and a back three would have left Arsenal’s defenders on an island, one-on-one against what is probably the most dangerous front three in the world.

There is real cause for concern in the implementation of the formation – why use it if not to stop the service into the most dangerous left-back and right-back in the world? Instead, Arsenal looked to dominate the middle and, in doing so, gave space to a duo who provided 23 Premier League assists between them last season. If the intention wasn’t to press Liverpool and stop them from dominating territory then this was the completely wrong approach.

The game was lost two minutes into the second half when, once again, Liverpool’s defenders easy job of finding the fullbacks. Given the first half, it is inexplicable that Arsenal made no adjustments to combat this precise threat, whether that would be to move the strikers wider when pressing or asking Willock and Guendouzi to play wider. 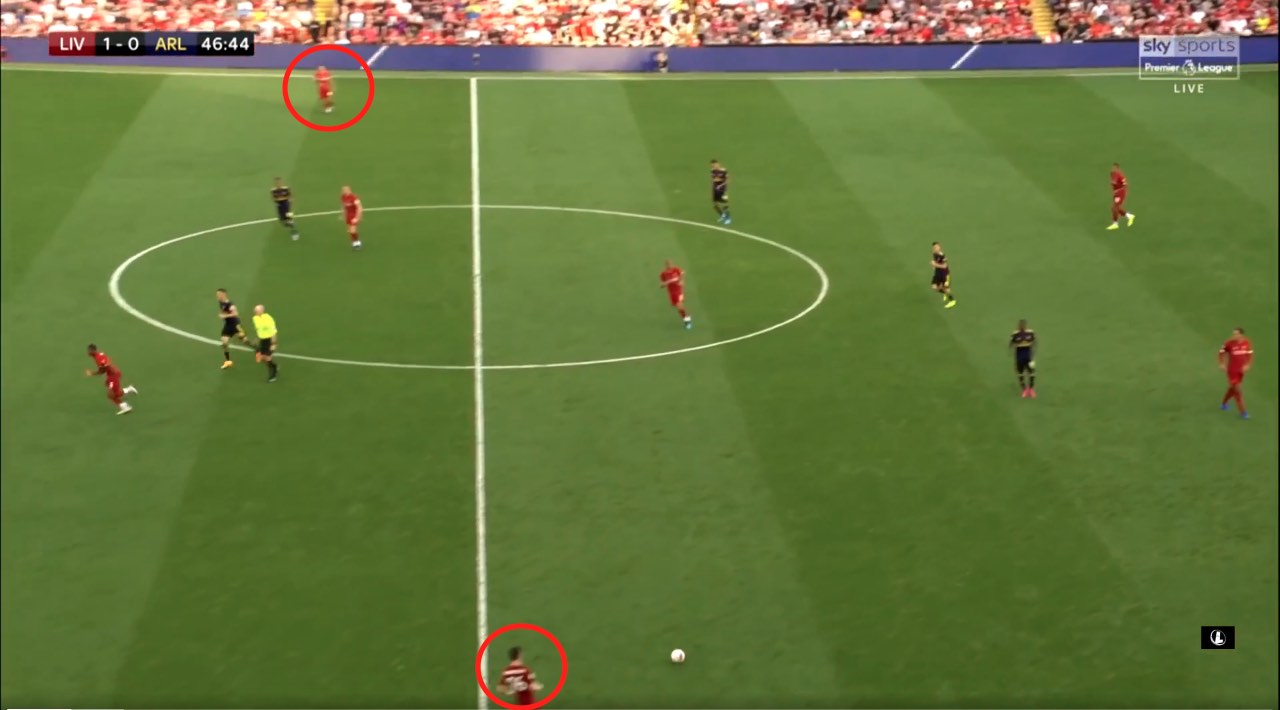 First the ball went out to Robertson, then it went out to Alexander-Arnold. At no point did a Liverpool player have to beat a man or play a tough pass. From the right, the ball came into the box and a moment of stupidity saw David Luiz concede a penalty.

Arsenal looked to cling on from there. The team’s first sub was to replace Dani Ceballos with Lucas Torreira. The Uruguayan went on to score but only after the introduction of Alexandre Lacazette, which came with 10 minutes to go with Arsenal three goals behind. Whether or not Lacazette’s introduction should have come sooner is a discussion to be had elsewhere.

Arsenal have shown already this season that there are reasons to be positive; talented youngsters are in Emery’s thoughts and a number of exciting new signings have started well. But, after two wins, the club (and fans) have been given a thorough reminder of how long the path back to the top is.

Next week, hosting Spurs, Emery and his players have the perfect opportunity to respond and retain the good mood around N5 that the season begun with.