Holding Out For A Hero

Last week, I wrote a piece analysing the differences that are beginning to emerge between last season’s Arsenal compared to the current model. My conclusion was that, at this stage, Unai has taken care of a lot of the low hanging fruit- or the ‘quick wins’ in corporate parlance. The team runs faster and harder and now looks vaguely competent away from home.

The bar was pretty low in both of these respects last season, but it is also clear that *something* is happening tactically, even if that something is not always simple to pin down. But that’s to be expected. My own expectation is that this will be a bit of a “sketch show” season for Arsenal, with ‘hits’ and ‘misses’ randomly interspersed.

In that piece, I also reflected on how the appetite for change among Arsenal fans has shaped and maybe even warped our perception at the speed and significance of it. During our last two league draws, I have heard various flavours of “we would’ve lost that game last season”, even though Selhurst Park was one of the few away grounds where Arsenal did actually win during 2017-18- and they came back from 2-0 down to draw 3-3 with Liverpool last December at the Emirates.

In the wake of the enthusing performance against Liverpool, Granit Xhaka has joined the pantheon occupied by Alex’s Iwobi and Lacazette and Hector Bellerin as men reinvented by the fair hand of Unai Emery. I think those players have, largely, done what they have always been doing this season, it’s just that Emery’s system is more favourable to their attributes now.

Meanwhile, the likes of Ramsey and Özil (though he’s slowly pushing the needle in the other direction) have struggled, relatively speaking, because they are free spirits being asked to play more rigid, less favourable roles in Emery’s structured vision for the attack. In the case of the likes of Lacazette, Iwobi and Bellerin, there are obviously knock on effects that create further momentum.

Playing in a structure that favours your strengths leads to you feeling more valued and more confident, which can accelerate your good form, which means you get picked more often, so you create rhythm and continuity. It’s the economies of scale effect for footballers. Does doing the same thing but in a more favourable environment add up to actual personal improvement? Does it even matter? Probably not.

And so we come to Rob Holding, who has quietly edged his way into the team. Injury to Sokratis handed Holding an opportunity, but the nature of opportunity- in football and in life- is dependent on good fortune. Would Ashley Cole have become the world’s finest left-back were it not for an ‘administrative issue’ for Sylvinho? Would Hector Bellerin be Arsenal’s current first choice right-back had Mathieu Debuchy not suffered at the hands of Marco Arnautovic?

Yet plenty of players are afforded opportunity in this way. Gavin Hoyte was given the chance to come face to face with Robinho when Arsenal travelled to Manchester City in December 2008, William Gallas having been dropped for disciplinary reasons. Robinho tore Arsenal apart that afternoon and, now 28, Gavin is playing for Dagenham and Redbridge.

It goes without saying that you need quality to maximise opportunity, but it also helps if you can offer something the team is missing. Alex Iwobi burst into the Arsenal first team in the spring of 2016 because Wilshere, Cazorla, Oxlade Chamberlain and Rosicky were all injured and the Gunners needed a dribbler and someone that moved the ball with purpose.

Arsene Wenger used to like one conservative full-back to tuck in and act as a third centre half and another to power forward like a deep lying winger. Bellerin’s rise coincided with Nacho Monreal supplanting Kieran Gibbs on the opposite flank. The Spaniard’s arrival was perfectly timed and he has never looked back.

It is too early to say that Rob Holding will experience a similar trajectory. Centre-half is certainly where the next wedge of the Gunners trust fund should be allocated. But he suits Arsenal for a few distinct reasons. For a start, there is the suspicion that Sokratis and Mustafi are too similar. Both are ‘contact’ defenders who like to leave the defensive line to engage attackers.

Holding is more considered and his style balances out the high risk / high reward style of his potential partners. Adrian Clarke highlights Holding’s impressive stats in this piece. He is blocking a lot more shots than his partners and making far fewer fouls as a result of his more considered style, which is complementary to both Mustafi and Sokratis. Yet he also makes more ball recoveries than his more senior colleagues, so he is hardly hiding in the barracks when it comes to putting his foot in.

Adrian also highlighted Holding’s keener defensive instincts in his breakdown of the Crystal Palace match, he’s gotten better at winning duels, having won 63% of his one on one duels in the league this season over 6 appearances, compared to 54% in 12 league matches last season. It’s too small a sample size to declare permanent, but he does seem a little more muscular this season, which you would probably expect from a 23 year old entering the final stages of physical development. 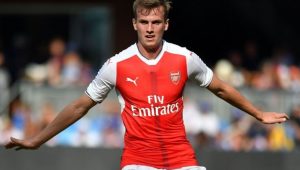 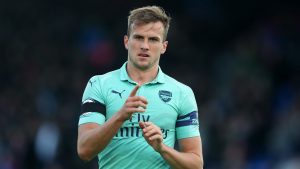 But one of the main reasons that Emery has come to rely on Holding is his distribution. He is well suited to the coach’s “red rag” possession style, where Arsenal entice the press by passing around the back before quickly moving the ball forward once the bait is taken. Holding has made the lofted pass to Bellerin a speciality, clipping the ball over the head of an onrushing attacker in the process to free the Spaniard to start the attack.

It is Holding’s calm control and pass that kicks off the move resulting in Lacazette’s goal against Liverpool on Saturday (the video below will play if you click on the ‘play’ button). Per Adrian’s piece, referenced earlier, only Torreira and Guendouzi boast better pass success averages this season, with Holding just touching the 90% ceiling in pass completion. The number of passes he is playing is also up from 50.25 per match last season to 59.5 this.

I was watching the highlights of @Arsenal's game last night and realized Lacazette's goal was even better than I first thought. The buildup has 16 passes, with Holding, Torreira, Xhaka, Mustafi, Bellerin, Iwobi, Ozil and Lacazette all involved. #EmeryBall pic.twitter.com/5K5jU2PiSz

Sokratis’ injury has been well timed for Holding, it meant he did not have to play during the early weeks of the season when the Gunners were still getting to grips with their style. It is unlikely Holding’s passing would have looked quite as advantageous were he receiving hospital balls from Petr Cech as opposed to the calmer strokes of Bernd Leno.

Across London, his friend Calum Chambers might be looking on ruefully as he contemplates his choice to join Fulham on loan. The Cottagers defence is the most disorganised rabble in the division and Chambers has been played at right back, right wing-back and centre half in an unsettled line-up. It is unlikely that Chambers’ ability has altered this season, but he is playing in an environment hardly likely to facilitate personal improvement.

Even in his spell at relegated Middlesbrough, Chambers was playing under the tutelage of Aitor Karanka in a team that conceded the fewest goals in the bottom half, despite their relegation. (They shipped 53 goals- Arsenal conceded 49 when they finished 3rd in 2011-12). While football’s sliding doors seem to have slam shut on Calum Chambers’ goolies, Rob Holding is looking to make himself comfortable in the first class carriage.