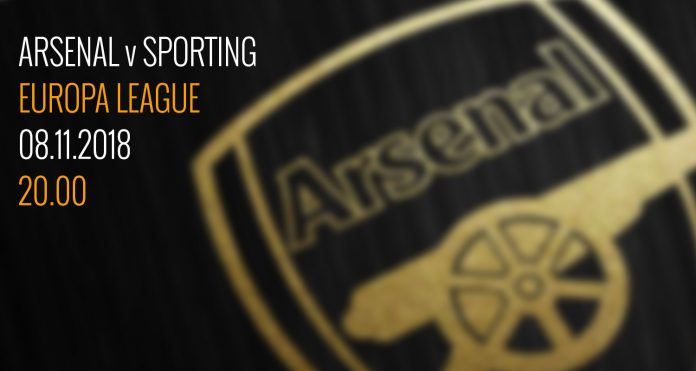 It’s Europa League action tonight as we take on Sporting at the Emirates. As I wrote the other day, a win would see us top the group, thus enabling us to rest players for the final two games which would be beneficial when you look at our Premier League schedule. Not only that, it would allow Unai Emery to give some playing time to promising young players who haven’t quite got as much of a look in this season as they did last.

It’s why I think he’ll pick a strong side tonight, although we are still somewhat hampered by a couple of defensive injuries. Nacho Monreal’s hamstring injury is still ‘being assessed’, but according to the boss who says, ‘We are with him in a very precautionary moment because we don’t want to repeat the same injury’. He worked away from the main group yesterday so you have to assume Sead Kolasinac will start at left-back.

The ankle injury picked up by Sokratis is also still a bother apparently, although he did seem to take part in training yesterday. The Greek international played the full 90 in the previous game in Lisbon but hasn’t been seen since, so if they are as cautious with him as they are with Monreal then it’ll be a Shkodran Mustafi and Rob Holding partnership in the middle. At right back it depends how fit Hector Bellerin really is: he did play against Liverpool but was it a case that we got him through that game after a thigh injury because of the calibre of the opposition? If there are any doubts then Stephan Lichtsteiner will step in tonight, and I think Petr Cech will play in goal.

Matteo Guendouzi is available again having served a domestic suspension last weekend, and Emery can pick a front four from Aaron Ramsey, Mesut Ozil, Henrikh Mkhitaryan, Danny Welbeck, Alex Iwobi, Pierre-Emerick Aubameyang and Alexandre Lacazette. Whichever way you mix and match that group of players, it’s pretty healthy, but I do wonder if Aubameyang might get a start up front tonight, and I’d be surprised if, after his excellent cameo against Liverpool at the weekend, Iwobi didn’t get the nod. However, the Spaniard remains a difficult man to predict when it comes to team selection, so we’ll have to wait and see what he does.

It’s clear that he is after top spot though:

Of course the first target for us is to finish first in this group. Tomorrow is a very important match because they are second in the table and if we win, we are first in the group. That’s our clear target tomorrow.

We know from the previous game that Sporting are decent, if not brilliant, opposition – and it took a mistake from one of their defenders for us to find the chance that won us the game. It wasn’t a brilliant performance but you can’t argue too much with a 1-0 win away from home in Europe – especially as we’d just played on the Monday night.

This time around we’re better rested, we’re at home of course, and confident having put in what was an encouraging performance at the weekend against Liverpool. Their midweek defeat suggests there may well have been an element of good timing when it came to facing them, but it seems that the result and the way we played has instilled some confidence in the squad. Mustafi says:

That was the first game where I felt like we came out from the first minute and were everywhere until the 90th minute.

With another home game on the horizon, it’s a chance to show that – in spite of the defeat to City at the start of the season – the Emirates is a tough place for teams to come and get results. There’s a push now in the next couple of games to continue this momentum into the Interlull, and after that we can start to focus on some difficult opposition and a fixture list which really gets quite challenging because of the amount of games we have to play. It’s why sealing top spot tonight is so important, so let’s hope we can do exactly that.

For some extra reading this morning, here’s Tim Stillman on Rob Holding. He’s someone I think is quietly impressing this season. His improvement may not be as spectacular as some others: he doesn’t get to showcase his talent with lightning fast step-overs on the touchline or forays down the right which end up with assists, but it’s there nonetheless. There’s a maturity to his game and I do think he’s responding well to the new system that Emery has put in place.

It’s still a bit early to make definitive judgements, and you know me – I’ve been burned by a promising young central defender more than once – but his trajectory is very encouraging. He gets away with the odd thing here and there, but seems to learn from those incidents too – and when you consider that he’s doing it in a team which still has some significant defensive flaws, it makes it all the more impressive in my book.

Righto! That’s your lot for now. As ever we’ll have a live blog for you later on, and all the post-match stuff on Arseblog News.

And if you’re an Arseblog Member on Patreon, Andrew Allen and I did a live YouTube Q&A session last night which you can see if you log in and go to this post. If you fancy signing up, it’s just €5 per month + VAT in the EU, and you get access to that and all the other articles and podcasts we’ve produced thus far.

Catch you later on for the game.