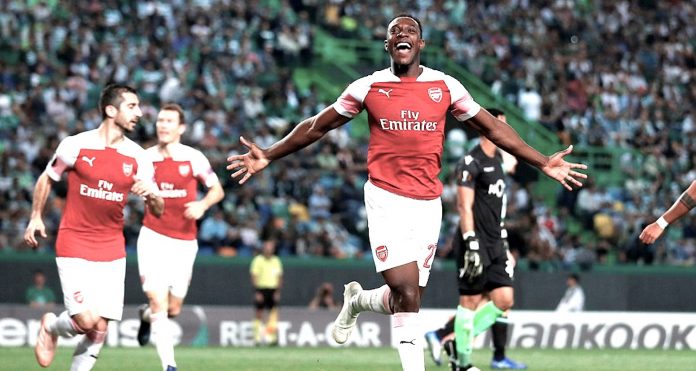 Arsenal made it eleven wins out of eleven thanks to Danny Welbeck’s late strike in Lisbon. The England international found himself clean through after a slip by former Liverpool defender Sebastian Coates, and after taking a touch he rifled the ball through the legs of the keeper and that was enough to take all three points and put us top of Europa League Group E.

In truth, it wasn’t a game of huge quality. Unai Emery made changes which were necessary ahead of Sunday’s trip to Crystal Palace but which also meant picking up where we left off against Leicester on Monday was always going to be unlikely. I said in yesterday’s preview that the Spaniard nearly always has a surprise when it comes to his team selection and that picking Granit Xhaka at left back would be verging on crazy, so he’s clearly living la vida loca because that’s exactly what he did.

To be fair to the Swiss international, despite not being particularly well suited to the position he did the job well and Sporting didn’t expose him as much as they might have liked. A Tweet I got from @RVAgooner suggested that Emery was constantly talking to Xhaka throughout the second half, perhaps ensuring that he wasn’t caught out positionally, and as a short-term fix for what was our most challenging European tie to date it was a decision which paid off. Fair play.

There wasn’t a lot to like about the first half in general, not simply that we yet again failed to get out of the blocks in a meaningful way in the first 45 minutes. It was fairly dull stuff all round, and it was something Emery commented on afterwards. He was obviously pleased with the win, but his concern over how slowly we seem to start games is now becoming apparent:

There’s no doubt we were better in the second period once again. Ramsey created a good chance for Aubameyang but he found the keeper equal to the task, while Guendouzi found Welbeck but his near-post effort was blocked away by some good last ditch defending. We brought on Lucas Torreira for Mohamed Elneny and looked better for it, the Uruguayan is far more progressive with his passing, and that incisiveness helped put Sporting on the back foot.

We did have the ball in the net through Welbeck, but the referee disallowed it for a push. It was a generous decision for the home side as replays showed the Arsenal man was just stronger in the air while the defender slipped. It wasn’t a foul for me, but dat guy would have his revenge a few minutes later. Interestingly, the goal came after a little break in play for an injury, after which Sporting looked to press us more intensely and higher up the pitch – clearly an instruction from the sideline during that stoppage.

This is where the passing of Torreira really paid dividends as he played it through the lines to Aubameyang, whose flick resulted in the mistake from the defender, allowing Welbeck to go through and finish with aplomb for his fifth strike of the season. There wasn’t a great deal of danger after that from Sporting, the goal seemed to knock the stuffing out of them and any little moments they had we dealt with well.

Beyond that, it’s not a game that really merits a great deal more analysis. We went away against a side that hadn’t lost at home since some time last year, won the game, kept a clean sheet and increased our chances of finishing top of the group – for all that means in the Europa League. We didn’t play that well, but not playing that well and winning is now a lovely habit we’re in. Which isn’t to say we can’t improve, Emery himself is clear he wants that to happen, but in the meantime if we’re picking up three points in Europe and domestically while he works to make that happen then there’s not a lot of arguing with it.

There were a couple of players who I thought didn’t do themselves any favours. You can see why Mohamed Elneny is very much on the fringes of Emery’s squad, and Torreira illustrated his growing influence when he replaced the Egyptian, while Henrikh Mkhitaryan was ineffective again when he’s someone who ought to be really pushing for greater inclusion.

On the other hand though, two of our younger players really stood out for me. Matteo Guendouzi still has a tendency to get caught on the ball unnecessarily but that’s something that can be coached out him. His overall performance was very good though, he passed it well and like Torreira he looks for a forward pass first and if it’s not there he’ll keep the ball moving. Without midfield players who can burst through the lines with the ball at their feet, this is the next best thing and I like his ambition in possession.

Also, at the back there was a lot to like about Rob Holding who is quietly going about his business very well, and his defensive awareness was well captured in the dying minutes when he was first to a header which cleared danger from inside our box. There was no lapse in concentration as can happen late in games, and I also enjoyed how physical he was, flattening a couple of their players as he won headers. He got harshly booked for one, but he left those opponents in no doubt as to who was going to win the battles, and that’s an important part of playing at centre-half.

Right, for more discussion of the game and our performance, check out today’s brand new Arsecast. I also chat with Rory Smith of the New York Times about this article he wrote last week about Arsenal shareholders and Stan Kroenke. Listen and subscribe below, more from me here tomorrow and we’ll have more reaction to last night over on Arseblog News.