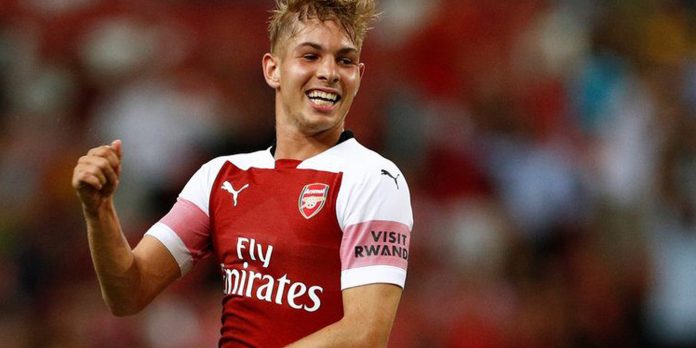 Little known fact: Arsenal have more players with double-barrelled names than any other club in the Premier League. When you add together the first team and the reserves & youth, we actually have more than all the other clubs put together. Whether it’s down to indecisive parenting or something else nobody really knows, but it’s an undeniable truth and something we should all embrace.

Everyone knows Ainsley Maitland-Niles, the versatile academy graduate who has played right back, left back, central midfield and even as part of the forward three this season in the Europa League. When he went on loan to Ipswich and Mick McCarthy, then boss of the Championship side said “Wow! The talent of him! I think he’s going to play for Arsenal, there’s no doubt in my mind. We are just so lucky to have him”, he often played as a winger.

It will be interesting to see where exactly Unai Emery sees him as the season progresses. The injury on the opening day against Man City was really unfortunate for him as he would definitely have been involved throughout the early months of the new manager’s era. In some ways it opened the door for another young man, Emile Smith Rowe who has eschewed a hyphen to separate his names but it doesn’t make him any less double-barrelled.

The 18 year old has scored twice, once at home and once away, and his progress and potential may well have contributed to the decision not to award a new contract to Aaron Ramsey. Sometimes you need to make space in the squad to allow new talent to emerge, and it’s so far so good for Smith Rowe.

Bubbling under there’s 17 year old striker Tyreece John-Jules who has been banging them in for the U18s, and with Eddie Nketiah now likely to be in Emery’s thoughts because of the injury to Danny Welbeck he could find himself featuring more for the U23s under the tutelage of Freddie Ljungberg.

Then there’s the exciting full back Jordi Osei-Tutu who was actually in the squad to face Man Utd at Old Trafford last season. As Arsenal looked to bring in some cover for Hector Bellerin this summer, perhaps it was telling that they plumped for 34 year old Stephan Lichtsteiner rather than a younger player. The former Juventus man would bring some experience to the training ground but because of his age he’d hardly be an impediment to young talent coming through, and allow someone like Osei-Tutu to develop further before staking a claim to a first team spot.

As ever with Arsenal there are young players from abroad, and even they seem to have similar nomenclature. There’s a French midfielder who has flown under the radar a bit, the club don’t want to get people too hyped up about him, but Francois Voyage-Voyage is really turning it on at youth level. His father Joe was a taxi driver who came to Paris from Senegal with nothing and has dedicated his life to seeing his son make it as a footballer. His hero is Patrick Vieira and they’re very alike physically expect for the fact that Francois is small and stocky and the former skipper was tall and lanky, but in terms of playing style they couldn’t be more similar despite being completely different.

And for those of us of a certain era, who grew up with a green Arsenal because of Liam Brady, David O’Leary, John Devine, that fella who went to Man United, as well as Pat Jennings, Pat Rice and Sammy Nelson from Northern Ireland, it’s fantastic that young Irishman Seamus Murphy-Magee is coming through the ranks now. He comes from a small village in county Offaly and made his name playing Gaelic Football while moonlighting as a central defender for Tullamore Terriers.

During a game against bitter local rivals Ballycumber Boys, an Arsenal scout happened to be in attendance. He was there to see local prodigy Denny O’Crane, a striker who scored at least twice in every game he played, but it was the big man at the back who stood out. The scout in question recommended him to the club and they took a chance on him, offering him a youth contract. He’s unusually tall, standing five feet fourteen and a half inches, which really sets him apart when he takes to the field, but his composure on the ball and elegant stride have led to comparisons with O’Leary, Arsenal’s all-time appearance record holder. If he can make even half as many he can be said to have had a successful time with us, but obviously he still has to prove he’s got what it takes.

As an aside, O’Crane only scored once in that game, but it was enough for Man City to become interested. They’ve since sold him to Abu Dhabi where his precocious skills are on display at the Four Seasons every day at 3pm and 7pm with an extra matinee on Sunday.