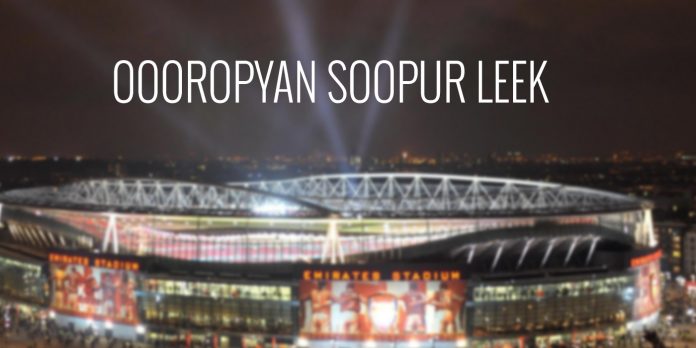 The prospect of a European Super League is one that has been on the horizon for some time, the idea being that the biggest clubs on the continent could form their own league separate from their domestic ones to fight for a prize that has yet to be invented. In the 2000s we had the G14, an association of said clubs, who undoubtedly discussed ways and means of making it happen and to ensure that if it did they would profit handsomely from it. Arsenal were one of the members of that association.

This Super League would, of course, be separate from the Champions League which is a competition made up of the best clubs in Europe to fight for a trophy that has some history and significance. We just need the Champions League but better because there’d be no relegation and you could sell the TV rights for a massive amount of money and not worry/care about the impact it would have on domestic football or fans or any of the minor trivialities like that.

In recent revelations sourced from Football Leaks, Der Spiegel reported that Arsenal were one of the clubs involved in discussions about the formation of such a league, along with other English clubs Liverpool, Man Utd, Man City and Chelsea. They’d be joined by Real Madrid, Barcelona, Bayern Munich, Juventus, Paris Saint-Germain and Milan as founding members with five more invited guests – Atletico Madrid, Borussia Dortmund, Marseille, Inter Milan and Roma.

When asked about it, lots of clubs declined to comment or did that thing where they pretend to cough when they say something so you can’t hear exactly what it is they’ve said. Interestingly, the two men now charged with running Arsenal have made comment. Both Vinai Venkatesham, the Managing Director, and Head of Football Raul Sanllehi are at pains to point out they would never ever ever do anything that would damage the Premier League … unless of course they had to do something that would protect the best interests of Arsenal.

Arsenal aren’t or never have been interested in playing in any competition that weakens the Premier League. The Premier League is the world’s leading league in the leading sport; we don’t want to do anything to damage it. I see these articles that Arsenal want to break away – we never want to do any of that.

Here it comes though. That three letter word that changes the trajectory of what he’s saying so much …

It’s the ‘I smoked weed but never inhaled’ of football officialdom. To be fair though, I get it. If all the other lads are planning something big then you’d be foolish not to at least find out what it is. If there was a European Super League and you had a chance to part of it or get left behind like a club not too far away from us, would you turn it down? As much as we might all dislike the prospect of it, if it happens are you better inside the tent than out?

As for this recent document that included Arsenal as one of the participants, Sanllehi says:

The way it was explained may seem we were doing secret things but there is nothing secret. There is one document that has been presented in an article that has Arsenal’s name; it also has Barcelona’s name. But there’s no signature and I can assure you in Arsenal and Barcelona we have not seen the document. It’s a draft, probably drafted by some proposal discussed with one of those clubs in that list that I don’t know about. It’s a real document – I cannot deny that – but I can assure I’ve not seen that document.

What document? Oh, that document. I’ve never seen it. It has my name on it? And there are pictures of me sitting down signing it? And the meta information in Microsoft Word shows that it was created by me on my computer? I don’t think any of this is sufficient evidence to suggest I had anything to do it even though I uploaded a picture of myself to Instagram with the hashtag #raulssuperleaguedocument.

I kid, but you know what I mean. I’ve said it before and I will say it again – a European Super League would be absolutely rubbish. There are really no sporting reasons behind it, only financial. It’s about selling TV rights, sponsorships, advertising, merchandise and all the rest. It would be terrible for the domestic leagues, and awful for fans who would be asked and expected to pay even more to attend games which would have little or no stakes – no relegation for 20 years: imagine how dull mid to end of season games would be.

As football, along with most other sports, becomes more and more driven by money, it would be great if somebody managed to stop and think about what’s best for the game. To make it exciting, to make it enjoyable, and for games to mean more. Group stages of the Europa League and Champions League generate revenue but little in the way of excitement beyond the ‘Oh my team is playing a match and I like to watch my team’.

The obvious answer is a knock-out competition but fewer games = less revenue so that’s never going to happen. But maybe an acceptance of the fact we’ve pushed things as far as they can go would be a positive. They’ve squeezed as much as possible out of players and fans, now step back and consider the idea that sometimes less is more.

So the season is over, Unai Emery’s Arsenal finished 5th once again in the Amazon Super League, winning the Facebook Trophy for a third successive season beating AC Milan 3-1 in the final. It was our 9th game against the Ivan Gazidis managed side this campaign, but a crowd of 7,540 at the Peroni Stadium didn’t seem to mind as they look forward now the prospect of the 128 team World Cup which is taking place on the sun over the next two months.

Meanwhile, at New Highbury ‘FC The Arsenal’ spanked Sp*rs 5-1 with a hat-trick from Juan-Carlos Cazorla, as he continues to follow in the footsteps of his famous dad. The first came as early as the ninth minute when a cross from veteran Reiss Nelson found him at the back post and … [fade out]