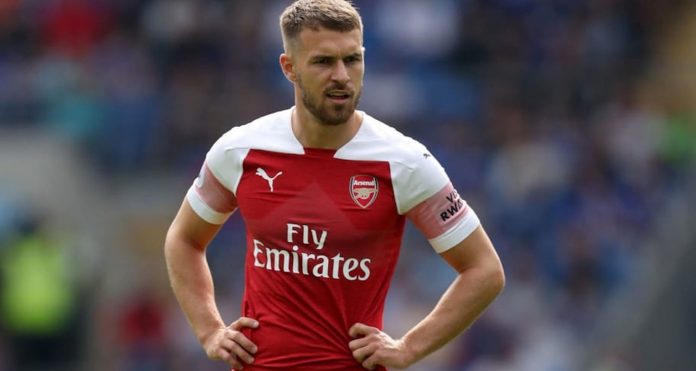 Let’s start with the Aaron Ramsey situation as the midfielder confirmed yesterday that he’d thought he’d agreed a contract with Arsenal, only for it to be withdrawn before he could sign it. He didn’t exactly says ‘That’s that!’, and did leave the door open for further negotiations, but the most likely outcome now is that he leaves on a free next summer because he’s pretty much ruled out a January departure.

Speaking after Wales defeat to Spain in a friendly, he said:

Everything has been going great with the club – we thought we were in a position where we had agreed a deal but that’s no longer the case. So I just have to carry on playing my football and do my best for Arsenal this season and I’ll leave the rest with the club now.

Am I disappointed? That’s a decision that they have made and things happen in football and you just have to get on with it and carry on playing the best I can.

And on his plans, he continued:

Would I stay for the rest of the season? Of course, yeah. I am contracted to Arsenal and I am going to do my best now this season to try and achieve something special.

People will point to the club and say this has been mismanaged, to see a player of his quality and value get to the point where he can leave on a Bosman is poor. But then this is not anything new. Theo Walcott, Robin van Persie, Mesut Ozil, Alexis Sanchez, Jack Wilshere and Alex Oxlade-Chamberlain are players who have been in this position in recent times, and this season Ramsey is joined by Danny Welbeck who can also leave on a free in the summer.

We’re looking at losing two, experienced, home-grown players for absolutely nothing when they could have brought in tens of millions in the transfer market if we’d acted with greater decisiveness. Whatever way you want to spin it, it’s been on ongoing theme at this club for too long, and it’s something we have to improve on.

However, it really does take two to tango. Can we blame Danny Welbeck for not signing a new deal if there is no new deal to sign? Of course not. The Ramsey situation is a bit different though, there have been ongoing attempts to agree new terms, and what I’d heard is that after this apparent agreement between the two parties, there was radio silence from the player’s side of things which then prompted the withdrawal of contract.

I think there’s a bit more going on behind the scenes than we know about. Is his agent the easiest to deal with? Have we basically called his bluff, or was their plan all along to run down the contract so he’d have a plethora of options next summer because he’s available on a Bosman? Given the vast amount of change, and the fact we haven’t been a competitive team in Premier League terms for some time, has that played a part in Ramsey’s desire to do something different before the end of what is a short career?

I don’t know the answers, but again I come back to how we as a club manage these situations. Letting players get into the final 12 months of their contracts leaves you with the weakest of all hands if you want them to stay, and you can get held over a barrel in negotiations, ending up paying more than you probably want. It happened with Mesut Ozil, I think, and even to a lesser extent the deal which made Theo Walcott the highest paid player at the club back in 2013 when he refused to sign new terms until the January before his potential June departure. His hand in that negotiation was made stronger by the fact Arsenal had recently lost Fabregas and Nasri (with less than 12 months on his contract), and then van Persie who was in that same contractual position, and we simply couldn’t afford to lose another high profile player.

If he wasn’t prepared to sign before the end of last season, should Ramsey have been sold in the summer? Probably. The money would have been useful to help replace him and maybe boost the squad in other areas, but there’s a feeling that with everything else that had changed this summer and focus on our tunnel area and all that, we took our eye off the ball a little bit.

I think the Ramsey and Welbeck situations are a bit of a legacy of the Wenger area, but also the Gazidis one too. As CEO, as the man who hired the super-duper contract bloke, he’s got to take some responsibility here, and hopefully the new Head of Football, Raul Sanllehi, can do a better job.

Right, not a lot else, but just to respond to some feedback on yesterday’s post which was called ‘lazy journalism’ and ‘stupid’ from someone who felt it would be much more interesting if I actually wrote about what these players are doing now, this one’s for you.

Finally for today, an Arsecast full of stats, Arsenal Women, and much more. Get it into your ears. More from me tomorrow.

Coach hire: What exactly do Arsenal want to be?