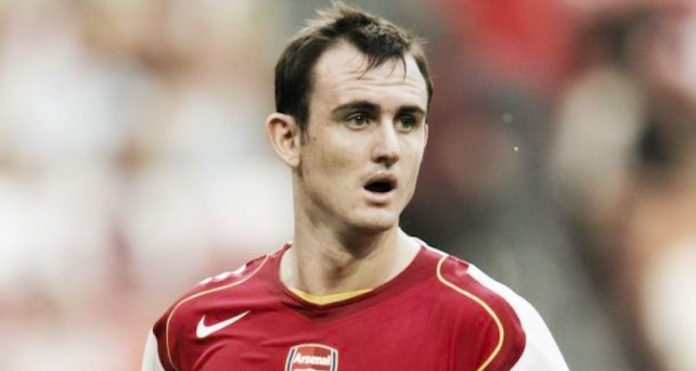 It’s a stormy morning in Dublin, it’s Friday, it’s an Interlull and it’s booooooooring. Sorry to all you fans of the new, exciting, UEFA Nations League in which Ireland apparently play Wales and Denmark for all eternity, but it just doesn’t do it for me.

So, given all that, I thought we’d delve into the past a bit and then back into the future (but not at 88mph) to see how life has turned out for some of our ex-players. It’s often been said that very few players leave Arsenal to go on to bigger and better things. There are some obvious exceptions but for the most part it appears to be true and lots of these guys have struggled down the years.

Anyway, hopefully it’ll open your eyes to the challenges faced by ex-players, particularly those who never quite made it to the top in the first place.

Wenger’s first attempt a speedy French left-back, a role that would later be played by Gael Clichy, Armand Traore, and then Andre Santos who suffered from the fact that he was neither French, speedy, or a left-back.

He retired in 2010 having lived in Belgium for some years. Combining his knowledge of that country with everything he’d learned around Christmas time in England, he set up a cafe in the capital called Brussels Sprouts, with a variety of mini-cabbage dishes on the menu.

It didn’t last long, the occasional customer who ventured in complained of an overwhelmingly bad smell which nobody could pinpoint. Was it the sprouts? Was it the farts brought on by the sprouts? His dreams of a chain of sprout outlets died, and since then he’s been working as a typewriter ribbon salesman and finding it hard to make a living.

Best known for a solid elbow in an FA Cup game against Preston back in the 90s, he was often referred to as Tyson. Many thought this was because his fighting nature put him in the same bracket as former World Heavyweight Champion Mike, but in fact the nickname was bestowed upon him by former Arsenal teammate Martin Keown.

Caballero would always fall for pranks on the training ground, famously spending three hours asking Vic Akers and other staff members, where he could find a bucket of sparks, and he was such a sucker Keown called him Dyson. Caballero mis-heard and when he left Arsenal spread the erroneous story of how the Gunners likened him to the boxing champ.

Is currently the warden in a maximum security prison where inmates are tortured with Maroon 5 music all day long. Rates of insanity are through the roof.

He may well have been the first American to play for the club, starting one game against Wolves in the League Cup in November 2003. The back four that night was Simek, Justin Hoyte, Stathis Tavlaridis, and a very young Gael Clichy.

He went on to play for Sheffield Wednesday and Carlisle United, before returning to the US where he invented a piece of software which would allow users to prevent Facebook from harvesting all their data and personal information. Having shopped it around to Venture Capitalists and Angel Investors, Simek went for a meeting in March 2014 with a man who, according to diary entries, called himself ‘Mork Tuckerberg’.

He said he was very interested in the idea and would help fund it so the world could be safe and secure online. Simek has never been seen since and no trace of this Tuckerberg character has ever been found despite a lengthy FBI investigation.

There were high hopes for the midfielder when he was spotted by fellow Dubliner Liam Brady and brought the Irish academy. Although he did make some headway in Scottish football, he was involved in a terrible incident with an ice cream van and a combine harvester while on holidays in Malta.

A half-Irish, half-Uruguayan doctor called Mick Riviera did his best to make things right, but sadly after the operation our old friend Patrick Cregg was left with a leg for an arm, and an arm for a leg.

When he signed from Everton for £8m, many felt Arsenal were finally getting the ‘fox in the box’ they’d needed. Sadly, it didn’t work out as well, and he struggled for form, fitness and goals.

Nevertheless, his career saw him well paid and he bought an island off the coast of Scotland where he teaches pottery to city professionals who need to get away from their jobs and have to find time to find themselves. He specialises in bowls because that’s the only thing he can make.

Was the subject of a law suit from one Credit Suisse executive who suffered third degree burns when removing his bowl from the home-made kiln, but an out of court settlement was made.

Currently working on his autobiography which has a working title of ‘My name is Jeff (ers)’.

Who gives a fish’s tit?

Right, that’s enough of that trip down memory lane. For more incisive reading this morning, check out Tim’s excellent column on Alex Iwobi and his form this season.

I’ll leave you with a brand new Arsecast which, by the way, you can get on Spotify now if that’s your thing.