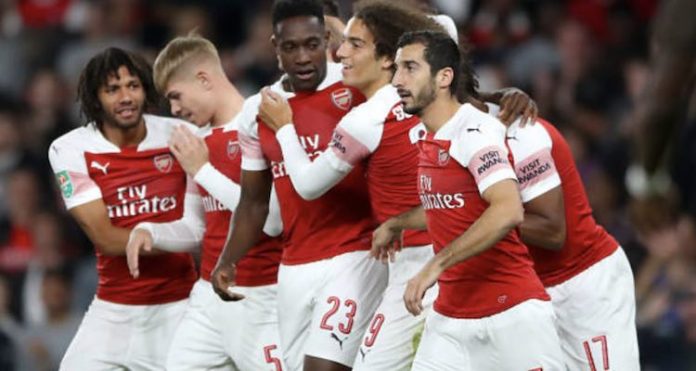 ‘Why are we so poor in the first halves of games?’, has been the major question so far this season. Yesterday we bucked that trend with an excellent first 45 minutes which saw us score twice and look as comfortable as we have at any point under Unai Emery’s reign.

The first goal came from a corner, it was played short, Matteo Guendouzi whipped in a lovely cross to find a completely unmarked Danny Welbeck who headed home from close range. Quite why nobody was picking him up is unclear, but the striker made no mistake for his third goal of the season.

We were on top throughout the first period without really creating too much in the way of clear-cut chances, and yet another Mustafi slip presented them with a reasonable sight of goal before we doubled the lead. This was unquestionably our best team goal of the season. It began with a free kick near halfway, we played it backwards, keeping possession with Guendouzi and Holding, then used the keeper who started the build up with a ball to to Lichtsteiner on the right who nodded it infield to Mkhitaryan. He took it forward, fed Iwobi who had driven through the lines to find Monreal overlapping who pulled it back for Welbeck to finish with his left foot.

The commentator said, “It was just left for Danny Welbeck to do what Danny Welbeck does”, which was quite funny considering that Danny does a lot of stuff, but with four goals he’s our joint leading scorer this season and showing that when he stays fit he’s a very useful player to have in the squad.

The second half began with us crafting a number of chances, we had a lot of joy down their left hand side but ultimately we were a bit wasteful and didn’t make the most of the positions we got into. That came back to haunt us when Guendouzi made a silly foul just outside the D, and from the resulting set-piece Alan Judge curled home an excellent free kick, although you might ask some questions of Leno’s positioning and reaction time.

That sparked the visitors into life and they had a real go in fairness to them. Leno made some saves, although there was nothing particularly troublesome, they had some corners, and Emery’s decision to bring on Alexandre Lacazette for Emile Smith Rowe told you he felt we needed another goal. The addition of Lucas Torreira for Mkhitaryan told you he felt we might be in danger of conceding again before we scored.

Monreal almost got one but for a fantastic save, they had a penalty shout rightly waved away – unlike the one in the first half which was an obvious foul on Iwobi but Mike Dean is gonna Mike Dean – and in injury time Lacazette sealed the deal having missed a chance a couple of minutes earlier to do just that. He took advantage of some indecision at the back to drive into the box and fire a shot into the bottom corner to make it 3-1.

It was a very good test. It was a very good opportunity for the team to continue improving, to continue creating with our style. Also today, a team in the Championship but with a very good performance and demanding a lot of us in the 90 minutes. I think we can do more things in the 90 minutes like we want but when they scored it was difficult for 15 minutes after this goal. I think it’s good for us, it continues to test us in difficult moments and we can find our best response.

I’m not sure it’s a game from which we learned a great deal. Smith Rowe looks a real talent, some of his first half play was fantastic and on another night he might well have had a goal. Guendouzi looks excellent on the ball, but there was evidence that he still has plenty to learn off it in terms of his decision making and positioning.

The keeper did fine but it wasn’t the kind of performance to dislodge Petr Cech, and in the end it was a bit of a shame that we made such hard work of the second half that we couldn’t afford to bring on Eddie Nketiah for his first appearance of the season. The introduction of Aaron Ramsey with 6 minutes of normal time to go was evidence that Emery was keen to see out the game with experience rather than risk a youngster, and given the scoreline you can understand that, but it would have been nice to see Eddie. Hopefully he gets a go in the next round.

Still, it’s six wins from six now, there’s a nice bit of momentum building, and signs that some of the beauty is being added to the beast. The second goal really does stand up to repeated viewing; Welbeck’s scoring; Iwobi looks like he’s enjoying himself under Emery’s tutelage; and every win will add to the confidence within the squad, so all in all a decent night’s work despite the fact we made it a little more difficult for ourselves than it should have been. And for those who think that’s simply a hangover from the Wenger era, Arsenal are gonna Arsenal.

I also liked Emery’s response to the story doing the rounds this week that he had prevented Germany boss Joachim Low from seeing Mesut Ozil when he visited the training ground. The reality was Ozil wasn’t there for some reason, and Low had a meeting with the BFG as well as a word with Leno and Mustafi, but there was no point at which the Arsenal boss stood in his way. Asked about it last night, Emery said:

I think it might not be true folks. Low has bought a ticket to the world, and he’ll have to come back again if he wants that chinwag with Mesut. Right, I’m finding it hard to write the next line, so I’ll leave it there for this morning. More reaction and post-match coverage over on Arseblog News, I’ll be back tomorrow with an Arsecast and all the rest.