If I could use one word to describe Arsenal’s season to date it would be intriguing. Arsenal and Unai Emery are still feeling each other out like a pair of boxers in the opening rounds of a heavyweight bout. Or maybe even two stray dogs getting a good whiff of one another’s backsides before jumping to judgement.

There is a kind of tension because, naturally as fans, we want to rush to verdict but most of us know we cannot just yet, which is new and also strangely frustrating after years of certainty in the latter years of the Wenger era. Change is exciting as a theory, but the reality is that there is lots of uncertainty and quite a bit of waiting around for gears to start grinding.

For my money, Emery’s biggest and most fascinating conundrum is what to do with his attack. If you follow this column with any sort of regularity, you will know that I have written about the subject often in Unai’s short tenure. Back in May, I wrote that Arsenal ought to consider selling Aaron Ramsey.

Not because I think Ramsey is a bad player, or because I hate him. Or indeed because I hate rhinos. I have always liked Ramsey and still appreciate his talents. But I felt his contractual situation gave the club a good chance to generate needed cash by selling a valuable player in an area where Arsenal are a bit overloaded. The question of whether the Arsenal town is big enough for Ramsey and Özil is an interesting one.

The two dovetailed well enough during the 2013-14 season, but the system was very different with a single point of contact upfront in Olivier Giroud in that campaign. Ramsey is very valuable in a system with a single striker, much in the way that Lampard happily wolfed down Drogba’s scraps at Chelsea. Dele Alli does something similar for Spurs with Harry Kane occupying centre halves.

Ramsey's type are most valuable to teams with one striker: Alli off Kane, Lampard off Drogba, Ramsey off Giroud/Lacazette. Put two strikers on the pitch and they are not so integral. Lampard really struggled when Ancelotti put him at tip of diamond behind two strikers.

In October last year, Arsenal thrashed Everton 5-2 at Goodison Park with Özil, Ramsey and Lacazette all on the score sheet. Ramsey’s running was crucial in support of lone striker Lacazette on this occasion. We see in the image below for Lacazette’s goal that afternoon that Ramsey has made a valuable decoy run to split the Everton defenders and allow Lacazatte room to finish. 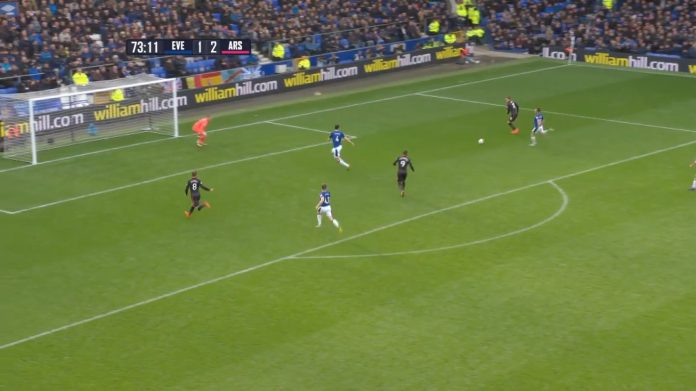 It maybe churlish to complain about the movement in a move that ends in a goal, but for Aubameyang’s strike against Everton on Sunday, Ramsey and the Gabonese move into the same spot, which makes Özil’s cut back a little more difficult than it ought to be, even though there is only one Everton defender in the way. It’s only a piece of improvisation from Ramsey and a failure to notice an obvious offside from the referee’s assistant that salvages the move. The spacing just isn’t right (time and understanding could iron this out, of course). 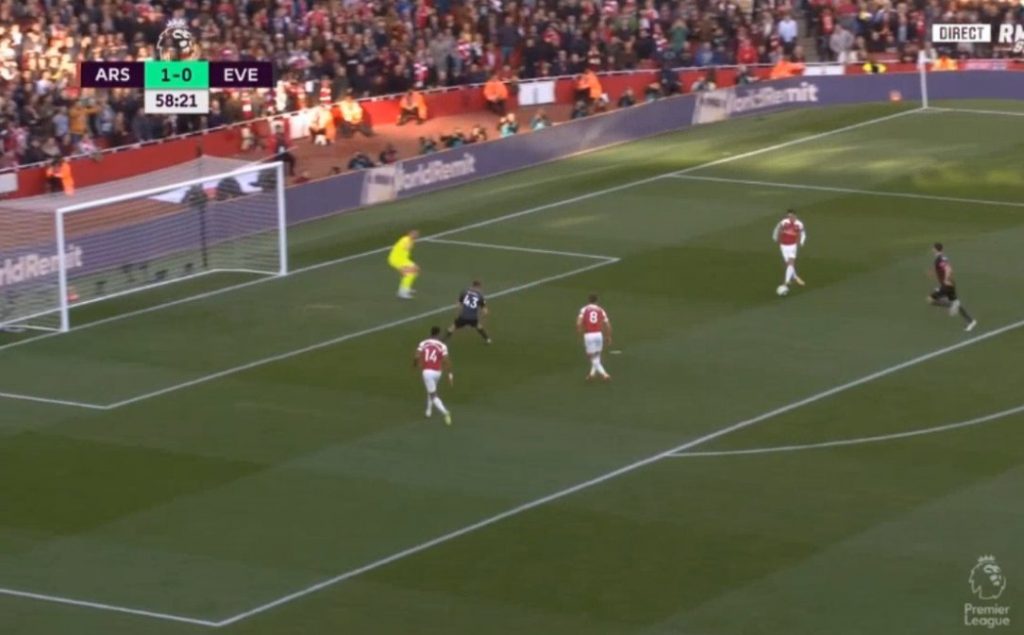 Aubameyang and Lacazette work very well together because they complete one another. Lacazette is very good at linking play and hassling centre halves, which Aubameyang isn’t really, he likes to play on the shoulder. Lacazette is also good at making decoy runs for his colleagues. They are a complimentary strike partnership.

Nice run from Lacazette to take Balbuena away from Welbeck. https://t.co/ftNmN3aUsJ

In an attempt to shoehorn Ramsey, Özil, Aubameyang and Lacazette into the same side, Arsenal are accommodating their best attackers. Yet all but Lacazette are playing in suboptimal positions (which probably explains why Lacazette is performing closer to his ceiling than his colleagues). This configuration tilts the team towards the left hand side and we reignite a thorny issue from last season because we leave Hector Bellerin stranded on a distant island on the right.

Really interesting halftime graphic here. Look at Bellerin out there on his own. No one close. Big difference from when Mkhi started on the right. Ozil drifting central. Laca and Auba too far apart. Again, from the first half today pic.twitter.com/33dnNTWDMK

Özil starts nominally on the right, but in reality, drifts away from that flank towards his preferred number 10 position. There is an irony here because, when starting in his favoured central position, he often drifts out towards the flanks. His game is built on the idea of finding space, which almost always means that he has to vacate his position to evade detection.

Arsenal touches (minus fullbacks) in the final 30 minutes v. Vorskla. Once again, all the attack concentrates on the left when Ozil is on the pitch. pic.twitter.com/Ctls6wqIDO

The other issue Özil is having is that he is not quite being passed to with the same regularity at the moment. Sanchez and Özil used to constantly look for one another in possession, exchanging passes at curve wrecking rates on a regular basis. Likewise, Santi Cazorla’s first thought was usually to try and spy Mesut. He hasn’t established a similar relationship in the current team just yet.

This season, with Guendouzi and Xhaka partnered together often, the Swiss has been stationed over to the left of the central midfield, with Guendouzi on the right. This has created a bit of a chasm between Xhaka and Özil, ergo, Arsenal’s most valuable and prolific ball recycling specialist hasn’t easily been able to find Özil’s slightly right of centre vantage point. (Not the first time this season that the phrase “right of centre” has created a barrier between Mesut one of his colleagues).

Given that Emery seems set on playing in a 4231 shape, I think Henrikh Mkhitryan has to start on the right hand side. A good attack has a good mix of servants and masters. Özil, Ramsey, Aubameyang and Lacazette probably has one master too many. Ramsey and Özil are free spirits that look to exploit space off the ball, which can create an issue for more defensive colleagues when attacks break down.

Aubameyang is a left wing forward in name only, he wants to join attacks at the earliest available opportunity. Mkhitaryan brings structure and balance to the attack because he is the only player remotely comfortable playing in the half spaces as opposed to the centre. The relationship he formed with Bellerin in the early weeks of the season has been Arsenal’s most fruitful attacking ploy.

Mkhitaryan is a player who can play to his teammates’ strengths, as well as his own. Lacazette looked a little lost and isolated at times last season, assigned sole responsibility for spearheading the Gunners attack. He looks far more comfortable when either Welbeck or Aubameyang are in the team. Mkhitaryan and Lacazette are slightly more malleable because they provide structure for their teammates.

In June I wrote a piece setting out why I thought there would be a couple of big casualties in the attack in the next 12 months. We have already seen some ‘creative tension’ between Emery and Özil, the coach also publicly urged Ramsey to concentrate on football rather than his contract in August and Aubameyang looked a little nonplussed when he was substituted at Newcastle. This isn’t just a tactical noggin scratcher for Emery, it’s a political hot potato.

He is simultaneously managing egos and figuring out the tactical configuration of his team. It is potentially dangerous for him to start isolating players until he has worked out precisely what he wants. Once he is clear which of his big ticket attackers is expendable, it will be easier (not easy, but easier) for him to manage them out of the side. It will likely be easier still when he is able to buy a couple more players that he does want.

Until Emery works out how to get the engine purring, he won’t want to dispense with parts that could prove valuable down the line. So for the time being, I would expect to see a continuation of this slightly awkward shoehorning exercise that accommodates most of our most talented attackers, but only in a way that extracts 70-80% of their capabilities. Sooner or later, a head or two is going to come rolling down the hill.