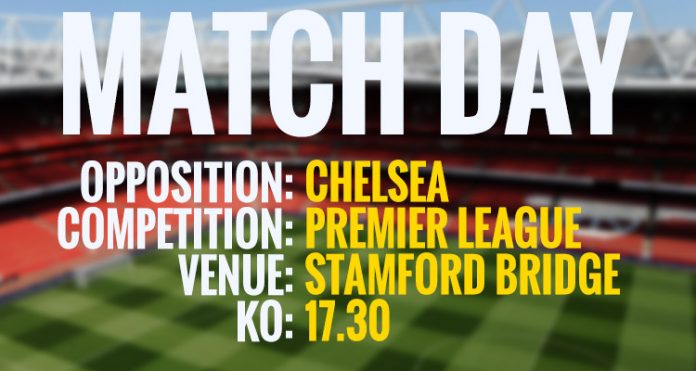 Our difficult start to the season continues this evening as we face Chelsea at Stamford Bridge. We already know what Unai Emery is going to do in terms of his goalkeeper, so now it’s about what other changes he might make.

If deemed fit Nacho Monreal will surely come in at left back, while the make-up of our midfield is hard to predict. The new boss says that Lucas Torreira is ready to go:

He is okay every day and is training good. He is now with the team and knowing and learning English conversation with us and can understand all the things we want to do tactically on the pitch. The first match against City he played 15 to 20 minutes and I think this is good, I want to continue with him improving and to be okay to play.

If he does come in, the question is who he replaces. Will it be raw but willing Matteo Guendouzi, or Granit Xhaka who was unimpressive against City? It wouldn’t surprise me to see the young Frenchman keep his place because what he can give us is non-stop running and energy in midfield, while his more senior colleague seems to take some time to get going at the start of a season. That’s been true in each of the last two years – he finishes campaigns much more strongly than he begins them, and I wonder if our stats and data and info back up that observation and might play a part in the team selection.

There’s a lot of hope and expectation on the Uruguayan. There’s been a collective desire for a truly defensive-minded midfield player for so long now, and this guy was identified as the man to add the qualities we’ve been missing. One of the things Emery has to do is find the right balance in midfield, the bodies are there, but how can he get the best out of the players he has? It might well be some time before that becomes properly apparent to him, but if the former Sampdoria man makes his first start today, there’ll be a keen interest in his performance.

Then it’s a case of wondering how exactly he’s going to set up his team? Two holding with one ahead? A trio in midfield with Ozil at 10 and two strikers? He’s hinted at being open to playing Alexandre Lacazette and Pierre-Emerick Aubameyang together, but my suspicion is that it’ll be the former Dortmund man pushed wide where he contributed to good effect last season despite concerns it takes him away from areas in which he’s most effective.

And what of Aaron Ramsey? The role he played last week against Man City was trigger the Arsenal press but it meant he was way too far forward, and it didn’t really work out. He could easily slot into a three man midfield, or play as the 1 in a 4-2-1-3, but we’ll just have to wait and see what Emery has up his sleeve today.

Worries about playing out from the back have abounded this week, because it’s a style that demands precision and understanding that we don’t necessarily have yet, but he hinted at some slight changes to it, saying:

Goalkeepers can play like a player, to start short with the centre back or the right or left back. It is not compulsory to start each action that way. Maybe if the opposition is doing high pressing against us, then we need also to find another option and to play the ball long in the second action.

You can’t imagine Chelsea will have watched us last week and not seen how difficult we found it at times, so that’s going to be something they’ll try and exploit. The benefit of beating a high press with playing out from the back is that once you get through their lines you have space to hurt them, but if you get caught on the ball high up the pitch you are, as Kenny Loggins would say, in a zone of danger. Finding the balance today will be crucial.

Obviously I’d love to see us get a first win of the season today, but if you offered me a point now I’d probably take it. I’m curious to see how much progress we can make in a week though, and while Chelsea are a good side, they’re not City good, so if we can make things work today, who knows?

As ever, we’ll have a live blog for you, plus all the post-match stuff like report, stats, player ratings and more over on Arseblog News. Also, if you want just live updates via Twitter, we fire out key moments in the match (goals, cards, subs etc) on the dedicated @arseblog_live account, so give that a follow if that suits.

Elsewhere, there were two departures yesterday. First up, David Ospina has joined Napoli on loan for the season. They do have an option to buy him at the end of the deal, but obviously we’ll have to wait and see how he performs. It wouldn’t be a surprise if next summer we had another Ospinathon as we try and shift him, but best of luck to him out there.

Then Joel Campbell joined Serie A newbies Frosinone in a permanent deal. In seven seasons with Arsenal he made just 40 appearances, and he had more loan moves than he scored goals for us. In many ways he’s emblematic of the latter half of Arsene Wenger’s reign: high hopes, but ultimately just not good enough. He seemed like a nice lad, and I hope he does well out there, but it’s amazing to think that after that summer when we got the runaround in Costa Rica, his contribution in all those years was so minimal.

Also, it means that bar players who have come through the academy like Alex Iwobi and Ainsley Maitland-Niles, Carl Jenkinson is the third longest serving player at the club. There’s a thing, eh?

Right, I’ll leave you with yesterday’s Arsecast, plenty to get into your ears there, and I’ll catch you all later for the game. Have a good one.