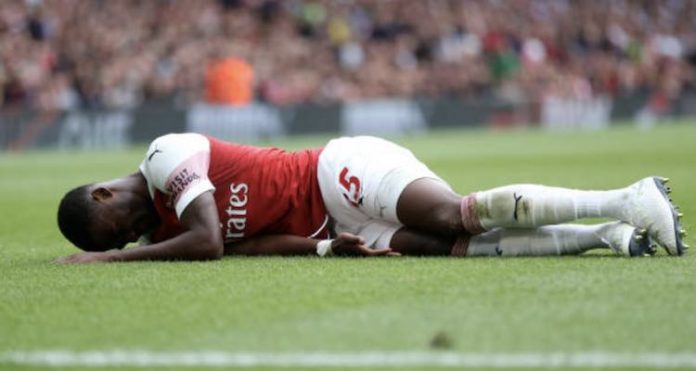 Happy Friday to you all. Let’s begin with bad news, in the get it out of the way sense. Yesterday one of the Arsenal medical team’s updates dropped and gave us the news that Ainsley Maitland-Niles suffered a small fracture to his fibula in the Man City game and will miss 6-8 weeks because of the injury.

That’s a shame for the squad, obviously, but also a real shame for him because when you look at the schedule between now and his potential return date in October, there are plenty of games in there he might well have featured in. I hope, bar any emergencies and injury crises, that his time at left back is over. Let’s do away with that notion, because that’s not going to be his position long-term, regardless of how well he did there last season.

There are at least two, possibly three, Europa League group games, and the Carabao Cup begins in late September too, so he would have had a chance to feature in midfield there, which is where I think he needs to start playing now. His versatility is useful, but there’s a danger that it also becomes an impediment to progress because you never get a proper run of games in one position.

We saw it to some extent with Alex Oxlade-Chamberlain who was shunted all over the place throughout his Arsenal career for that very reason. He also had significant issues with injury too, but in six or seven seasons he never nailed down any one role in the side as his own, or indeed his best one. Some of that is on him, some of it is on Arsene Wenger, but he allowed the manager to fill gaps in the squad on a short-term basis without having to consider the longer-term and I don’t think it was beneficial for him or for the team.

It would have been interesting to see Maitland-Niles get some games in the position he definitely feel is his own, and there will be more Europa League fixtures for him to do that, but it’s a blow for him to miss out this early in the season. It might also scupper any chance of selling Mohamed Elneny – unless the reports that we really need to cut the wage bill are accurate.

I can see how we might need to trim the financial fat a bit, but with a player that gives us midfield depth sidelined, do we have to be practical and hang onto the Egyptian? Maybe they’ll just sell him anyway, and think six weeks – during which there’s an Interlull too – is short enough to deal with the Maitland-Niles injury. Particularly as they still have Aaron Ramsey, Lucas Torreira, Matteo Guendouzi, Granit Xhaka, and a couple of others who could fill out midfield – not least if we play with an actual number 10, which is something I’d like to see but time will tell on that one.

Then, at his press conference yesterday, Unai Emery gave us the not especially surprising news that he was going to stick with Petr Cech for the trip to Stamford Bridge tomorrow. He said:

I am very happy with his performance. He has experience, he has quality, he has the capacity. For Saturday, the decision for me is easy. Petr Cech can continue to start the match, I believe in him. If Bernd starts, I believe in him also.

I thought Cech made some very important saves during the Man City game, but I don’t think too many out there would disagree with the assertion he struggled at times with the ball at his feet. Another week in training of playing this way may help, but you can’t help feel that Chelsea will have watched him and identified this as an area of weakness which they’ll try and exploit.

Which makes me wonder what Emery is seeing from Bernd Leno in training that makes him stick with Cech when the new signing is better suited to that aspect of how we want to play. He looks more comfortable playing out from the back, but there’s a lot more to being a goalkeeper than that, and for now the new boss feels like Cech is the best option despite being less naturally suited to the short passing game.

It’ll be another big test for the team, and for Cech on his return to his former club, because I’m sure they’ll put him under pressure as soon as he’s in possession. The keeper is a fairly significant cog in this style of play, so let’s hope that a better understanding of what Emery wants from everyone in the side will see us be a bit more secure at the back than we were against City.

Beyond that not a huge amount going on. David Ospina was in Napoli yesterday, his loan move there could be announced today, as could the departure of Joel Campbell – also to Serie A – who has finally got out while he can. An injury to Carl Jenkinson has pretty much ruined any chance he had of finding a new club before the end of the transfer window, so he’ll remain with us until January at least.

For some extra reading this morning, here’s Tim Stillman on Alexandre Lacazette and Pierre-Emerick Aubameyang playing together, and I’ll leave you with today’s Arsecast chatting about Matteo Guendouzi, Petr Cech responding to social media and what the consequences of that have been, plus a load of other stuff for your ears. Listen, subscribe, and give us a rating on iTunes!