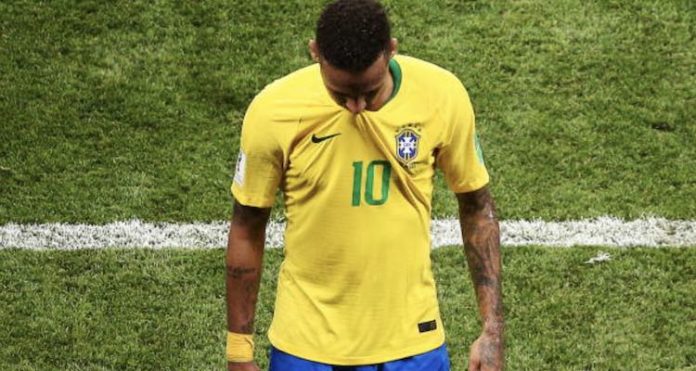 So, Brazil are out, and I know we have many Brazilian readers and listeners so commiserations to you guys. I saw Roberto Martinez after the game go over and have a bit of a hug with former Arsenal player Edu and I was all ‘Edu! I love that guy’, but I’d had just about enough of Neymar so I don’t feel sorry for him at all. I know he gets kicked a lot, but he’s a very difficult character to like and his antics are just too much for me.

If this was the World Cup when he was supposed to step up and show he’s the man to take over the mantles of Messi and Ronaldo, it hasn’t happened. Now he, and his name like Scottish person telling you they’ve had enough, can go back to PSG and be thoroughly indulged for the rest of his time there until something inevitably goes wrong. As sure as eggs are eggs that’ll happen. They won’t give him a gold seat on his throne toilet or something.

Kevin de Bruyne’s goal, after an own goal put Belgium ahead, was really something, and I enjoyed Brazil’s goal too. Yesterday saw a couple of truly great headers and that was one of them, alongside Varane in the France game. I do love a great header, it’s one of those skills that people think all footballers should have but very few actually do beyond the basics.

When I played football in Spain one of our central midfield players was a small guy from Barcelona, only about 5’6 or so, but man he’d win everything in the air. He also scored an almost precise replica of David Platt’s winner against Manchester United in one game. It wasn’t against Manchester United of course, it was a motley group of chaps who frequented an Irish bar somewhere near the Sagrada Familia, but that should not take anything away from the quality of the finish.

The best header I ever scored came off my ear ?

Anyway, France are through having won the earlier game against Uruguay, opening the scoring with that fantastic header from the Real Madrid man. The run and the timing was just superb, and the second goal came from goalkeeping howler reminiscent of Packie Bonner for Ireland against Holland many years ago. Uruguay looked flat without Edinson Cavani, but Lucas Torreira was busy again in midfield, and now that they’re out we can hopefully get the deal to bring him in done and dusted.

So, France and Belgium will face each other in the first semi-final, and today we’ll find out who plays the other one. It’s England v Sweden this afternoon, and later on Russia face Croatia. Exciting times if you’re an England fan, I’m sure, but if you’re an Arsenal fan – as much as you want them to do well – surely there’s a bit in the back of your mind that worries they might Sp*rs it all up.

Beyond that, the only bit of Arsenal news is that the first clutch of TV fixtures have been announced. We start on a Sunday for the third time since 2010, having never won any of those games. We’ve lost to Liverpool, drawn with Liverpool and lost to West Ham. It’s about time we won one, so the law of averages is on our side.